Jack London Questions and Essay on "To Build a Fire"

2. What is socialism? Why was London attracted to it?
Socialism is an economic system in which the means of prediction are owned and controlled by the working class. And London was attracted to it because of his experience in life gave him an insight into the terrible effects of poverty on people who had no political power.

Don't use plagiarized sources. Get your custom essay on
“ Jack London Questions and Essay on “To Build a Fire” ”
Get custom paper
NEW! smart matching with writer

1. What is the setting of the story?
The story “to build a fire” takes place in Yukon in Northwestern Canada, in the winter when the man starts out to make his way to a mining camp at like around 9 AM in the morning and whatnot.

The central conflict of the story is that the man is stuck and lost out in the wild, and he is rapidly catching frost bite on his body(fingers and hands) and he is trying to survive without a companion out in the wild, and I think the source of the struggle is that he didn’t have a companion that could have helped him throughout the story because he felt like he didn’t need one, even though he was told that it is unsafe to go out in those lands without a companion.

3. What happens to Tom Vincent at the end of the story? What does he learn? At the end of the story Tom Vincent finally gets a fire started and makes a sacrifice of burning his hands because of the frost bite condition, so he goes through the pain to save his life, because he thinks that no hands is better than no life, and the he keeps on rubbing his feet and warming his hands for I believe three hours, and the very next day he pitifully lips to the cherry creek camp and learns that you shouldn’t travel alone.

2. Which one of these endings do you think more clearly meets the conventions of naturalism? Be sure to consider the concept of determinism as you list your reasons. I think that out of both the endings, that ending two clearly meets the conventions of naturalism more because natural laws overcomes the man, by killing him which in a way shows that very little importance the man can overcome his death. And also in the second version the man does not have a name which shows how little importance the man is to jack London as a unique person and whatnot. I think that the second ending has an aspect of determinism in fate, which plays an unpleasant part in the man’s death.

Focus Question: How does “To Build a Fire” illustrate the elements of naturalistic literature?

“To build a fire” By Jack London illustrates the elements of naturalistic literature in many ways throughout the second version of the story which was written in 1908, because of Jack London trying to portray across the ideas of naturalistic literature and whatnot. Naturalistic literature was a literary movement during the 1880’s and 1940’s that used realism to suggest that social conditions, heredity, and environment has inescapable force in shaping a human character. It wanted to represent a picture of literary movement that replicated a believable everyday reality unlike romanticism and surrealism which portrayed idealistic and of the supernatural. Naturalism is usually defined as the philosophical conclusion that the only reality is nature.

There are also many varieties of naturalism. And in the story “To build a fire” the man views death as a part of nature that cannot be stopped at all, which is one of the reasons why “To build a fire” is a great example of naturalistic literature, determinism, and social Darwinism as well. Jack London was an author who grew up in poverty because of his father’s absence in his life and of his mother’s as well. He was born on January 12, 1876 in San Francisco, rise by his mother and step father, John London. He left school at the age of 14 then later adopted the socialistic views as a member of protest armies of the unemployed.

He was even arrested in 1894 in Niagara Falls and jailed for vagrancy. He educated himself in public libraries and at 19 he gained admittance to the University of California at Berkeley. His life was much laid out with obstacles and depression of some sort, but all this influenced his socialism and naturalistic literature which later helped him become one of the most important authors. Characteristics of naturalistic fiction, which in “to build a fire” was the man, attempt to control their own lives, but are usually threated by outside forces, which was the environment in the story. They also have settings that tend to be dark, harsh, and are sometimes urban. In the story it would be Yukon which is showed as a hard, cold, dark place.

They also often deal with brutality as well as struggle for survival, like how the man tried to survive by trying to build a fire and even trying to eat his dog. They also generally build their work around the concept of determinism. Determinism means that people are at mercy of the forces beyond their control, like nature in the story. That’s why “to build a fire” has so many characteristics of naturalism literature. But in the story naturalism literature is most shown in how the man doesn’t overcome the environment because it’s already written by the circumstances of the environment that he will die because of such harsh cold temperature. And determinism is expressed through the man’s desire to the fire even though he is faced with horrible odds.

“Day has broken cold and grey, exceedingly cold and grey”, shows how cold the day was which is an example of nature against both the man and the dog is. Another good example of how the story gives out a naturalist basis is when the mad describes “powder frost” and “crystalized breath” which is an element showing that you can use to picture the realness of the story, because you can imagine what it would be like to see your breath freeze before your spit freezes before actually hitting the ground.

I also found that “To build a fire” also illustrates social Darwinism because of how both the man and the dog end up at the end of the story. At the end of the story the man dies because his biology and naturalistic environment don’t allow him to survive. Herbert spencer first coined the phrase “survival of the fittest” which jack London in my opinion illustrates in the story.

An example of it would be how the dog survives instead of the man; I think it would survive because of its fur coat, and its ability to survive better in such environment. The dog acquired the best characteristics that helped him survive unlike the man who dies freezing. All in all I think that “to build a fire” by Jack London does illustrate determinism, social Darwinism and naturalism literature, from him trying to survive by building a fire to how the dog survived instead of the man because of his biology.

Jack London Questions and Essay on "To Build a Fire". (2017, Feb 20). Retrieved from http://studymoose.com/jack-london-questions-and-essay-on-to-build-a-fire-essay 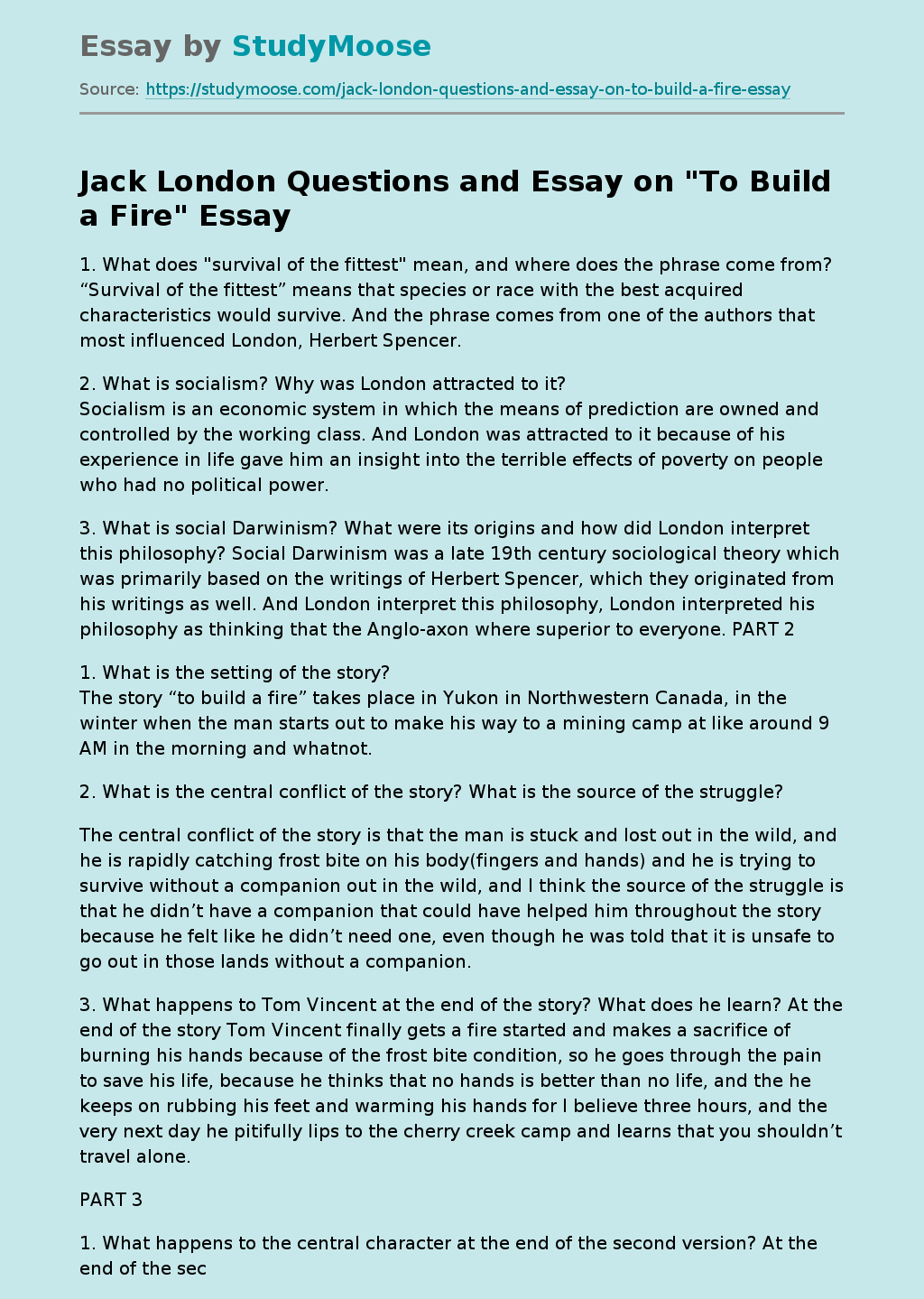