My two stories I am going to write and compare about are, “Indian Camp” by Ernest Hemmingway and “To Build a Fire” by Jack London. In detail these stories have many comparable situations, my arguments is to do with the use of language present in each story. To answer the question title, I will include a great deal of language features, imagery, style and tone. A comparison will be made at the end with a conclusion to finish it. In To Build a Fire, the landscape is described as “cold and grey, exceedingly cold and grey.

Don't use plagiarized sources. Get your custom essay on
“ ‘Indian Camp’ by Ernest Hemmingway and ‘To Build a Fire’by Jack London ”
Get custom paper
NEW! smart matching with writer

” “Absence of the sun” “Fifty degrees below zero”.

Many points, to do with the landscape are reiterated for example ” Far reaching hairline or the tremendous cold”, This builds up an essential image of the place, which could suggest not many people have been there before. The modifying adverb “exceedingly” alters the first bleak “Day had broken cold and grey,” cueing the reader to the likelihood that the temperature will worsen throughout the story.

These points are reiterated to show what tremendous courage the man has to travel in such a place, but he doesn’t really contemplate what he is getting himself into.

Jack London describes the man like an animal in parts of the story, “Once, coming around a bend, he shied abruptly, Like a startled horse” this simile could imply he shied like a horse or he could be compared to the horse itself, Like he is an animal wandering around helplessly.

Earlier we are told he has a “Muzzle of ice”, which a dog wears. Many points are cross-referenced to an animal. Even the man compared with the husky dog illustrates their physical descriptions show their contrasting states of compatibility with the environment. The man may be “warm-whiskered, but the hair on his face did not protect the high cheek-bones and the eager nose that thrust itself aggressively into the frosty air” Extreme and violent situations appear a few times in the story. The situations are not very fierce apart from one.

An extreme, near death, situation he got into was when he built his fire under a spruce tree and snow avalanched down on him and the fire, after he tweaked a few twigs for firewood. ” It happened. It was his own fault or, rather, his mistake. He should not have built the fire under the spruce tree. He should have built it in the open. But it had been easier to pull the twigs from the brush. ” The language speaks for it self; the situation is described as it is, with good choice of words to build the mental picture ” Avalanche”, “Imperceptible” or “Agitations”.

” It happened”, sets in a bit of panic and eagerness for the reader, as it is the first sentence of the situation, which makes you want to carry on reading to see what will be the outcome. The sequence of the way the paragraph is set out, keeps the reader enthusiastic and eager, as it doesn’t exactly say what has happened until you read it further down. Although this situation was not surprising, something just has to happen to him. He seems lost literally and philosophically. Before he was in many dreadful desperate positions, which he just about got away with.

For example when he was burning the brimstone and it went up his “nostrils and into his lungs” and after all the scratching, to light the match he dropped the match in the snow. Silly helpless desperate mistakes happens to him, and is only due to lack of preparation on combating the extreme climate and also not taking a partner with him, to help him out. These are basic rules, when being placed in a strange environment, which proves he lacks the mental strength. There are two violent situations in the story; the first situation was when all of his seventy sulphur matches roared into flames, he moderately choked on the fumes from the matches.

But as he held the ” blazing bunch” he could smell and feel his own burning flesh. ” It flared into flames. Seventy sulphur matches at once! …… His flesh was burning. He could smell it. Deep down the surface he could feel it. ” A violent situation like this was again predictable, something influential had to give. Before this situation, there really wasn’t a worse situation than this. The build up to this situation was fairly plain to understand. I noticed, that the man actually contemplates going on his own, and thinking is not a strong feature of his character, as he is out of his depth.

The language is of great quality in this situation; Short sentences bring out the most out of the circumstances ” The flesh was burning. He could smell it. Deep down below the surface he could feel it. ” The Short, sharp straight to point sentences has an effect on the reader, as if the reader was there. The choice of words, ” Burning, sensation, acute, absorbing are expressive in the sense that, that situation happening has the right choice of word to fit it. Unexpectedly enough the sentences are relatively simple to understand.

“Then he scratched the bunch…. There was no wind to blow them out” The second violent situation in the story was, the attempted killing of his dog. ” The sight of the dog put a wild idea in his head. ” The reader finds out he would do anything to save his life, including killing his dog and burying his hands in its warm body to protect his numbed hands, so he can build another fire. The man tries to call the animal but it wouldn’t respond ” He spoke to the dog, calling it to him, but in his voice was a strange note of fear that frightened the animal”.

The man finally got the dog’s attention with the “sound of whip lashes in his voice” thankfully for the dog he could not grab, due to his numb fingers. He realised, he was incapable of killing his dog. This situation happens, due to the desperation of the man setting in. The dog was his only hope, and he couldn’t grab the dog. The sequence of events sets up the mental imagery; I for one could have foreseen the man killing the dog. The language summed up his desperation, desperate the way he feels and desperate the way it is written ” He got on his hands and knees and crawled towards the dog.

” He spoke to the dog, which is something he doesn’t do at all throughout the story. The situation is largely written in much detail. It lasts nearly two paragraphs, unlike the other situations that were short in comparison. These last two paragraphs, possibly signifies his last situation ever, in other words London is slowly writing him out of the story, saving his best till last. The sentences are fairly long until a full stop occurs. “He glanced down at first in order to assure himself that he was really standing up, for the absence of sensation in his feet left him unrelated to the earth.

” By having long sentences it keeps the momentum of the story going, at a regular pace keeping the reader that little bit more interested in the outcome. Jack London finally starts writes out the man, ” His idea of it was that he had been making a fool of himself, running around like a headless chicken with its head cut-off. ” This is a simple simile to suggest, his life may be over finally. The man accepts his death “A good idea, he thought. To sleep off to death… There were lots of worse ways to die”. He literally moves from desperation to resignation and philosophy.

He accepts he has to die and this reflects the only rare time he thinks. “Indian Camp” by Ernest Hemmingway, is an emotionally sparse story, about three people who travel to an Indian camp to help a woman in need. Nick, Nick’s father and uncle George, set off on a rowing boat with two of the Indians guiding the outsiders to their destination. The beginning is unusual where it starts ” At the lake shore there was another rowboat drawn up. ” It could be a very bare opening because it sets the trend for the rest of the story; the language throughout the story is very sparse and lacks much-needed description.

Ernest Hemmingway writes the story very basically to get only the main points across ” the two boats started off in the dark. ” He doesn’t say it is dark in another sentence anywhere else, but instead joins it to a sentence to keep the description to a bare minimum. The language features are very few, there are not many adjectives and adverbs; Hemmingway wants the narrative to be foremost descriptive of people and places, also to carry the true meaning. Action, however, are key features of the story. ” There is an Indian lady very sick” “Uncle George gave both the Indians cigars” ” Later he started to operate”

'Indian Camp' by Ernest Hemmingway and 'To Build a Fire'by Jack London. (2020, Jun 02). Retrieved from https://studymoose.com/indian-camp-by-ernest-hemmingway-and-to-build-a-fireby-jack-london-essay 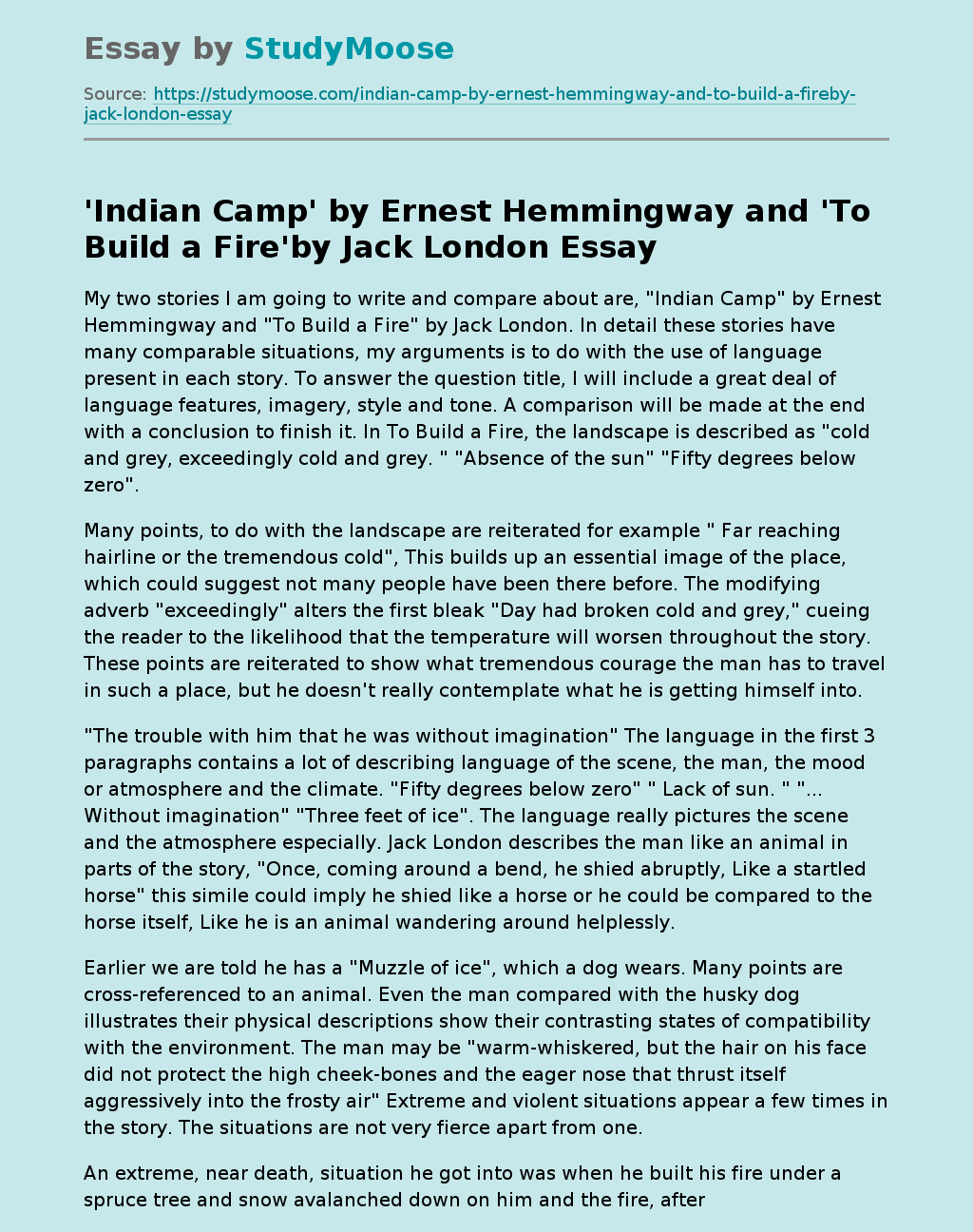