When looking at the work done in schools around the promotion of wellbeing, there are many different state and national frameworks that inform school-based practices. I have chosen to discuss the Framework for Student Support Services in Victorian Government Schools (Department of Education 1998) pictured below.

This framework outlines four major principles or levels of activity, grouped together with the ‘resilient student’ at its centre. The major principles are primary prevention, which is presented in the framework as the largest of the four principles and therefore indicates that it should be given the most attention, followed by early intervention, intervention and postvention.

Don't use plagiarized sources. Get your custom essay on
“ Issues in Education-Student Wellbeing ”
Get custom paper
NEW! smart matching with writer

I’d like to start by posing the question what is resilience and how can resilience be recognised in a student? Resilience can be defined as “the set of attributes that provide people with the strength and fortitude to confront the overwhelming obstacles they are bound to face in life”(Sagor, 1996, p.38).

There are also certain characteristics and descriptors of resilience that have been recognised by teachers and described by Sagor (1996) as being the most “social, optimistic, energetic, co-operative, inquisitive, helpful, punctual and on-task” (p.

38) students. So the aim for wellbeing in schools should be on trying to instil some of these qualities in its students as a preventative measure to give them the best chance at becoming a a resilient student and hopefully carrying that on into adulthood.

Primary prevention is the largest area in the framework because it constitutes the broadest and most significant area of activity. The aim is to provide students with the skills and tools needed on the path to becoming a resilient student.

This means raising awareness to what makes students vulnerable, developing targeted programs and strategies that help to reduce these vulnerabilities and increasing awareness the issues whilst providing different ways of coping and/or skills that may be useful when these events or adversities may arise. Primary prevention is not always the first choice in schools according to Richard Sagor, a Professor at Washington State University, he believes that teachers don’t always opt for prevention before intervention, especially long term teachers, they tend to see the problem/s as being with the individual students and not with the cohort of students or school as a whole.

Sagor suggests that “we must recognise that it is politically easier to ‘stay the course’ and continue to offer ‘traditional’ mainstream education…rather than to re-make our secondary schools into more hospitable, inclusive and preventative organisations”(1992, p.19). I found these arguments to be similar to those that arise in Australian literature on this topic for example “the health sector has invested considerable resources towards the development of a ‘packaged curriculum’ and….the evidence to date has been that school health education has little effect beyond the short term”(Glover & Butler 2004, p.300). The programmes we have in place seem to be missing the mark and not really achieving what they set out to do.

The next principle in the framework is early intervention. This is the time to assess the risks and identify the needs of students in order to really target those at risk of ongoing social, emotional and/or physical harm. By giving students the tools to be able to identify, assess and manage their own risks, early intervention intends to catch a problem at it’s beginnings and intervene before it gets any worse. This principle does promote student wellbeing and is probably one of the most effective as it can be very targeted information for issues that have already been recognised as being a problem.

Intervention involves providing effective management and support to students in crisis, this includes ensuring access to appropriate counselling, care and treatment services and is also concerned with providing the skills for professionals who are dealing with students at their crisis point. Yes this principle still has it’s place in the promotion of student wellbeing, but it is already a bit late for the students, the key is to get in before the issues arise.

Postvention is basically how the situation is handled beyond the crisis or event. It is the provision of ongoing support or counselling where necessary, monitoring the recovery process and evaluating the situation. After this crisis has passed and wellbeing is restored, a plan can be implemented or introduced into the prevention stage to increase awareness of the issue and hopefully prevent this happening for others in future or give them the tools to be able to cope with a challenging situation. I think this principle is very important and plays an evaluative role in providing wellbeing for present and future students.

The principles in the Victorian Framework for Student Support Services of 1998 are collectively designed to provide comprehensive support for the promotion of the wellbeing of students in schools all over Australia and are also being increasingly encouraged on an international scale. The key to moving forward is prevention, like anything if we can prevent a problem before it begins and/or provide the skills and the know how to deal with a crisis before it arises then everybody is much better off. Students, teachers, parents and the wider community would be stronger and better equipped to face the challenges of everyday life.

Our work as classroom teachers contributes in many ways to the promotion of young people’s wellbeing. It is no secret that high school students spend the majority of their teenage years in schools where they are supervised by teachers. Whether it be in classroom, out in the playground, out and about on excursions and even at the bus stop. Teachers are very influential figures in a young persons life, so it will come as no surprise that the work a classroom teachers does can contribute to the promotion of young people’s well being.

Wellbeing can be defined as,

“a state of positive psychological functioning that allows students to thrive, flourish and learn. Wellbeing refers to a state of positive emotional and social functioning that we would wish to nurture in all our students. The term wellbeing has been used to refer not only to a person’s subjective experience of ‘feeling good’ about themselves and their relationships with others but also to their sense of meaning, purpose and growth”(Goh, 2013).

Wellbeing is a very broad term which is difficult to define. This definition from Goh (2013) stood out to me because it mentioned the fact that promoting the wellbeing of students allows them to ‘thrive, flourish and learn’, this is the important objective for schools and teachers to remember. Norris (2003) argues that “Children learn best in an environment that is safe, nurturing, and affirming”(p.318) which I think is the aim for all classroom teachers. Teachers can use a range of teaching strategies to enhance the resilience and overall wellbeing of their students. An example of a strategy for teaching resilience in America is the ABC’s of resilience. Renee Jain (2013) speaks about the difference between two people and what makes one person resilient and another person not.

The A stands for adversity, this is the problem being faced. The C stands for the consequence or the reaction to the adversity and the thing that makes two people end up with different consequences is the B which stands for beliefs(about the situation). A resilient person is armed with the beliefs and the tools to pick themselves up and move forward. Those without resilience will be consumed by the adversity and struggle to get back up (Jain, 2013). By making students and teachers aware of this connection it is easier to understand why we need to be taught the qualities of a resilient person in order to maintain wellbeing. Many efforts are being made to spread the message of wellbeing for students through the use of programmes designed by non-government and some government organisations.

The USA are world leaders in the sheer number of programmes and resources in the promotion of mental health, with thousands of programmes in operation with varying levels of success (Weare, 2010, p.27). The promotion of mental and wellbeing in Australia is also starting to thrive with programs such as Root of Empathy (2009) and Mind Matters(2009) at the forefront of the efforts to reach students with the message of wellbeing (Weare, 2010, p.28). In the UK “an increasing number of schools are engaged in what is effectively mental health work…working on a wide range of initiatives…two particular examples are Place 2 Be (2009), which supports councellors in schools and Pyramid Clubs (2009)” (Weare, 2010, p.28).

I think the most prominent thing that stands out to me on an international scale is that everyone is trying to approach this from a whole school and even a whole community perspective, making it everyone’s business. I do think that this is how it should be and to be effective in promoting overall wellbeing of students it has to be a looked at as a holistic approach. By that same token, staff wellbeing is also a priority in promoting positive school environments.

This means that it is important to look after yourself as a teacher, if the teacher is stressed, not focussed, and not looking after their own wellbeing then that will reflect onto the students wellbeing. In conclusion, teachers are very important role models and play such a pivotal role in a young persons life. Countries all over the world are now staring to really understand how much of an impact teachers and even schools as a whole can can make in the promotion of wellbeing in students. As long as the approach is holistic and targets students in the time of their lives when they need this information the most, we can quite possibly create a new generation of resilient young people. 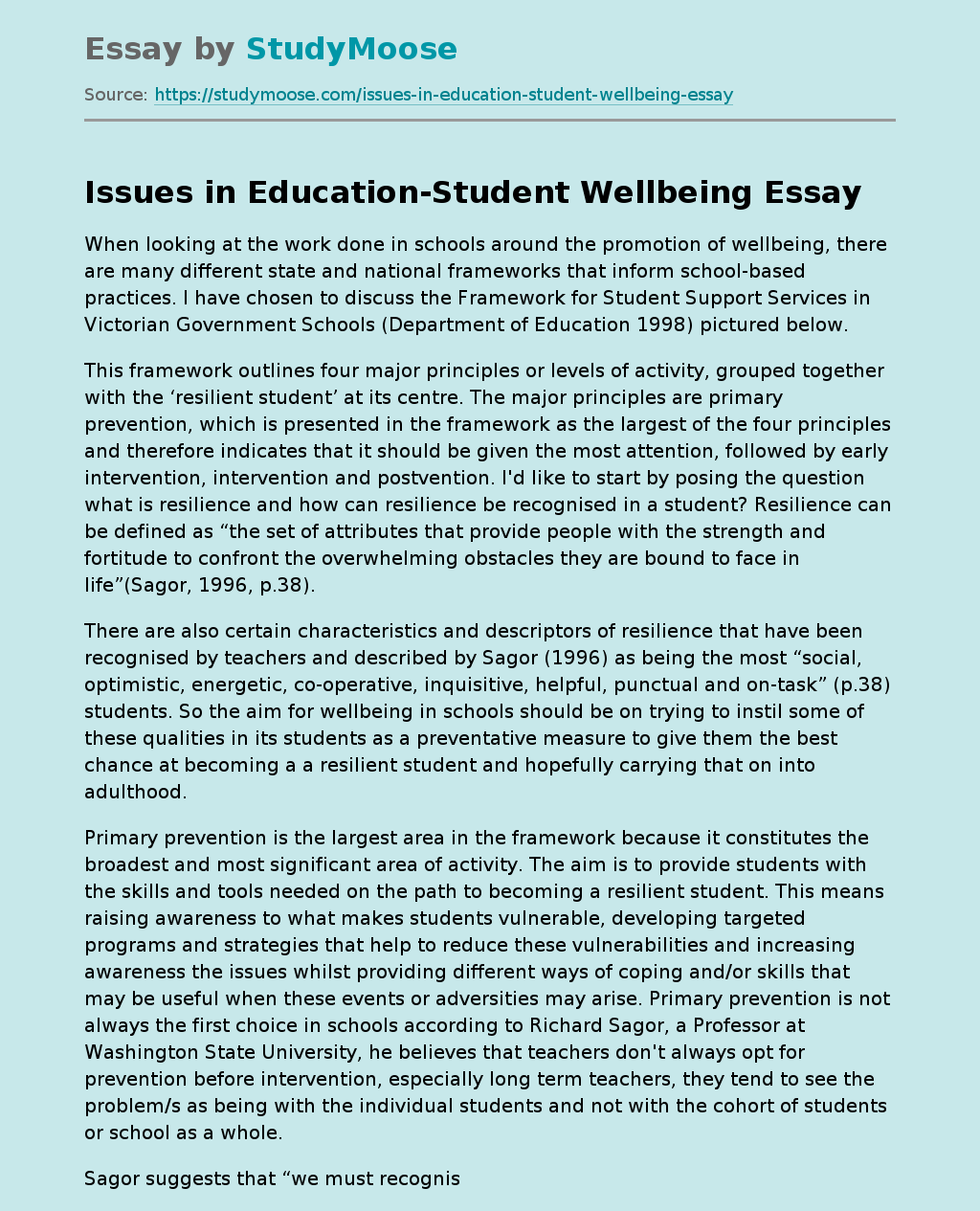