In the book Ishmael, Daniel Quinn argues claims about our culture and beliefs through Ishmael, the gorilla. He somewhat effectively argues his claim, I say somewhat because he doesn’t adequately use all three parts of an argument: ethos, pathos and logos.

Quinn’s intended audience is very clearly every Taker/human that is living everyday without really realizing the destruction of the environment and society around them. His rhetorical purpose is to show these people what they’re doing wrong and not necessarily tell them how to fix it, but telling them how they should inform everyone and essentially start a revolution.

He does this because the world is very quickly being destroyed by humans because of our lack of energy to do something about it. Quinn puts into perspective how the world is slowly being ruined through the character of Ishmael.

The reason I don’t think Quinn’s argument was extremely effective is because he didn’t use very much ethos.

In the beginning he used Ishmael’s captivity in the zoo then the menagerie to give Ishmael some credibility with being able to observe humans from the outside of our world. Ishmael also taught himself how to understand humans which gives him some credibility as being very smart. Quinn does mention a few books Ishmael read to further his knowledge about humans, one being the Bible, but that is about all the ethos he uses. He doesn’t use any ethos while arguing throughout the book to back up his claims which is where I see most of his faults.

Daniel Quinn mostly uses logos to support his claims throughout the book. On almost every page there was logical evidence to back up his claim he was currently making. He did this a lot through stories he told that put many things we see every day in a different perspective hence making us think about it in a very different way. For example, my favorite story was the one about the creation of man and he ends with “then man appeared” (Quinn 53). Ishmael says the same thing with “finally jellyfish appeared” (Quinn 56). He did this to show that creation did not end with man like we previously thought.

Throughout the book Quinn uses very few examples of pathos. He mostly tells stories that made me feel guilty, for example on page 80 he discusses how we’ve “poured our poisons into the world” (Quinn 80) and he goes on to say there is almost no way for the world to recover because we’ve damaged it so much. This makes me feel very guilty and angry to the CEO’s and people that have come before me because they haven’t done anything to stop it. There have been people to try but no one has ever stopped drilling for oil and driving giant semi-trucks that are destroying the earth. Quinn doesn’t use pathos often, but the few times he did it was very effectively used.

Daniel Quinn presents Ishmaels arguments in a very philosophical style and it feels as though the student, who is never named in the story is the reader. I could really see myself as the student, when he was confused I was often confused as well and I think that is why Quinn never gave him a name because it made it easier to put yourself in that position since we are essentially learning as the student is.

I think Quinn’s argument needed more pathos and ethos to be truly effective. He uses mostly logos which is very effective for this type of argument, but there is not much emotion or credibility to back up the logical statements he is making. At times I was angry at society and humans in general because of the destruction and I think if there was more of that pathos it would have been much more effective of an argument for me. 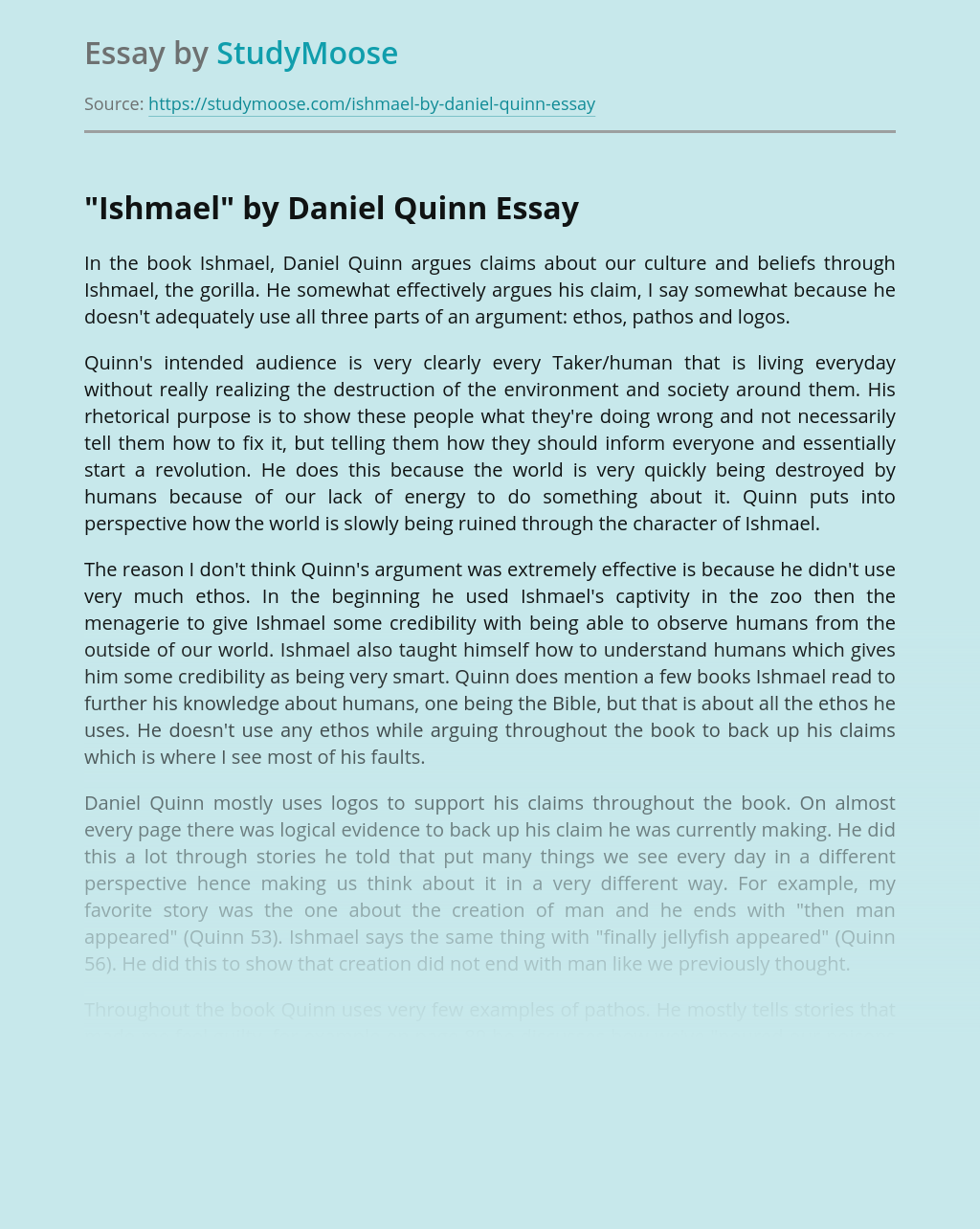