The movie “Himala” by Filipino National Artist Ishmael Bernal deals with the social issues of poverty, religion and fanaticism. It is a commentary to the living conditions of the Filipino people and their faith and beliefs. The greatness of the film is reflected by the fact that it is now considered a Filipino classic, with Elsa’s (Nora Aunor) speech being quoted until today.

The different characters in the movie represent a variety of sectors in society.

Don't use plagiarized sources.
Get Your Custom Essay on Movie “Himala” by Ishmael Bernal Just from $13,9/Page

Elsa, the protagonist of the movie, is an image of a false prophet. Apparently she can heal the sick and perform miracles but no proof of it can be seen throughout the movie. Nimia (Gigi Duenas) portrays the people who do not believe in miracles. She may be considered a sinner because she was a prostitute in Manila, not to mention she also set up a cabaret in the town of Cupang, but she only does this just so she can put food in her stomach.

She strives hard to keep herself alive. Chayong (Laura Centeno) is Elsa’s confidante, and she fully believes in Elsa’s healing powers. She personifies an innocent and gullible person. Because of this blind faith, she gets assaulted and causes her to resort to suicide. Mrs. Alba (Veronica Palileo) used Elsa’s supposed healing power to profit from the people, selling merchandise and other paraphernalia. She is the epitome of an exploitative person, taking advantage of the people’s gullibility and innocence and making money out of it.

The filmmaker Orly (Spanky Manikan) shows a person who is an outsider. He uses the opportunity to make a name for himself by producing a movie centering on Elsa’s life. He shows a change of heart when he felt guilty for not helping Chayong and Elsa when they were assaulted. Lastly, Sepa (Ama Quiambao) and the fans of Elsa represent a sector of the Filipino people who are willing to sacrifice their livelihoods just to be saved by a false prophet, all for the belief that God will help those who do not help themselves. They are so blinded in their faith that they don’t even see the truth, Elsa’s confession, even when it is presented right in their face.

The whole film is focused on faith. It depicts the ease of Filipinos to believe religious claims without evidence and thinking logically. Poverty is also visible in the film, showing kids eating stale meat and enacting a cholera outbreak.

Miracles are a controversial issue, and talking about its truthfulness will more likely spark a debate. I personally do not believe in miracles because I believe that what you put out in the world comes back at you. I think miracles are not miracles per se, but they are the good that you did before which is coming back to you.

The film shows Filipino spirituality’s different sides. Of course, there are believers and non-believers, and none of which is considered right or wrong since they have the freedom which to believe. As I have said, it shows that people are willing to sacrifice their whole lives work just to secure their spot in heaven without acknowledging the facts. There is also a good side to Filipino spirituality, as showcased by the priest (Joel Lamangan), who believes in God but still is a rational thinker. People should believe the real meaning of religion and not some false prophet’s views on the matter.

The message of the film is that to do not believe everything you see, for we may see a slightly skewed image of the truth. In the film, it was said that Elsa had healing powers, but not once did a person actually thank her for healing her or a cured person appeared. This may tell us that Elsa never had healing powers or that the people she was healing were in on the lie. We can also take away from the film that if we are to believe in God, we should believe in God himself, not on any person claiming to be a prophet because it can lead to deadly consequences, like the death of Sepa’s two sons and Elsa’s death.

The film is now considered timeless, classic even because it can withstand time. It is a universal struggle. Not only the Filipinos adhere to this problem but the rest of the world does too. Religion scopes a huge population; many of them may face the same problems discussed in Himala.

Overall, the film was great and I am glad I had the chance to watch a Filipino film classic known around the world because of its greatness and permanence.

Movie “Himala” by Ishmael Bernal. (2016, May 15). Retrieved from https://studymoose.com/movie-himala-by-ishmael-bernal-essay 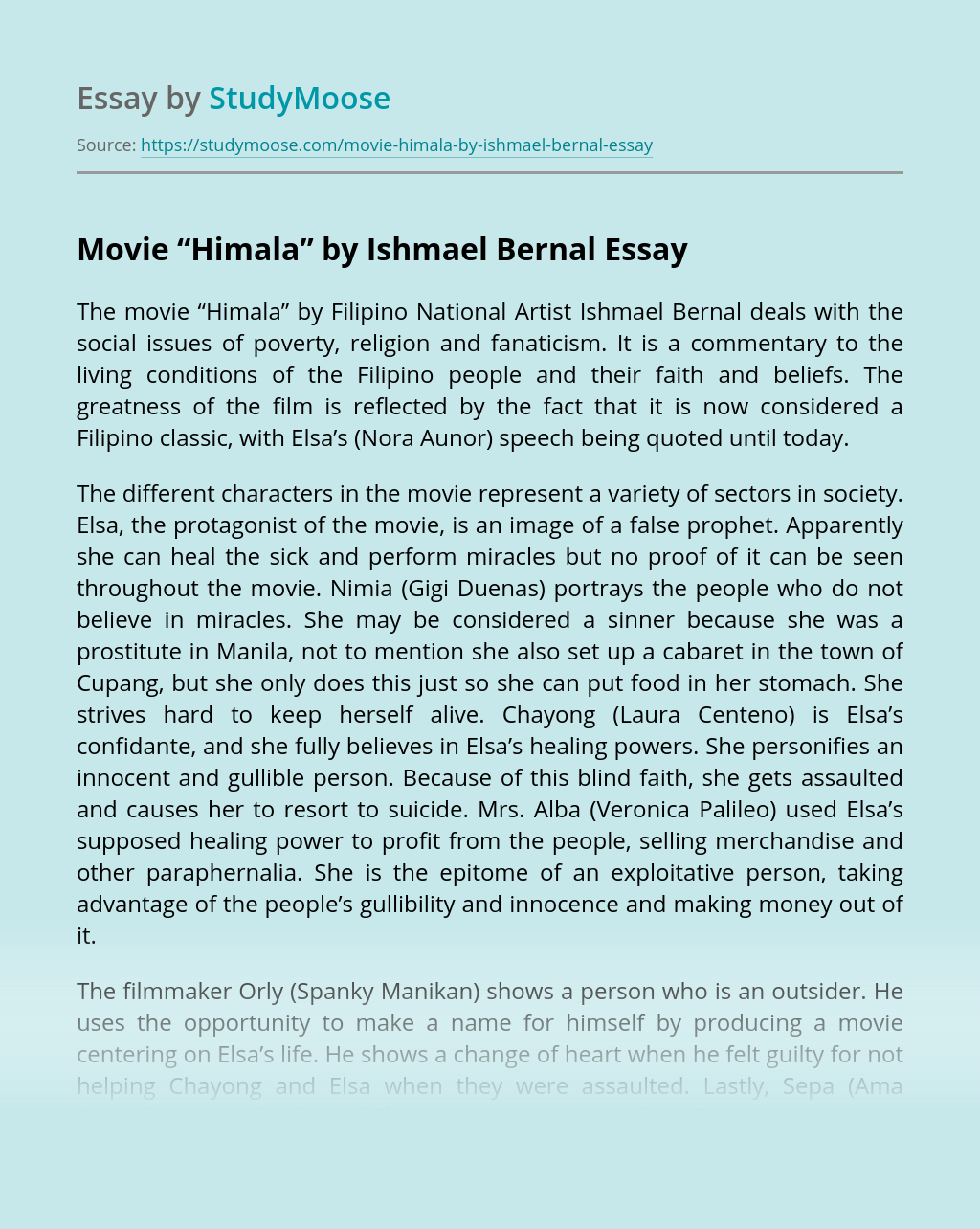 Filipino Сolony and College in Borneo

Rate this post The North Borneo Project The Borneo project was a proposition of establishing a Filipino colony in Borneo under the British power. It would have been a great project but, like unfortunate plans, there were hindrances that led to the well-planned project to be left-out and dropped. One of the reasons would be...

Get Essay
The beauty and nature of the Philippines

Rate this post INTRODUCTION Have you ever dreamt of traveling around the world of seeing amazing spots. Travel and Experience the Philippines 7,107 islands, its natural wonders, colorful and warm engaging people. Among its popular and breathtaking sights are: Boracay beach, Pearl farm island resort, marine life and beaches that will surely test your adventurism...

Outdoor Advertising Association of the Philippines

Rate this post Outdoor Marketing Association of the Philippines (OAAP) became one of the sectoral members of Adboard on May 1974. The history of outside marketing dates back during ancient times when male carved stone plates to communicate ideas by displaying them in public places. For this reason, outside advertising was currently present and regarded...