Solitary Confinement is the act of placing a prisoner in a small cell, usually the size of your average bathroom, for up to 23 hours a day with one hour reserved for physical activity. The only contact the prisoner is allowed to have with the outside world is through letters. It sounds horrible, but is it torture? To answer this we have to define and set up criteria for something to be considered “torture”. I have created such a definition and criteria and have decided that for something to be considered torture it must (a) cause some sort of physical or mental pain or discomfort, and (b) must have some sort of lasting effect upon the victim.

Don't use plagiarized sources. Get your custom essay on
“ Is Solitary Confinement Torture ”
Get custom paper
NEW! smart matching with writer

Solitary confinement is torture because it causes mental anguish and often leaves prisoners with mental illness and other mental problems that stay with them long after their prison term is over. First we have to see if solitary confinement does in fact cause some sort of physical or mental pain or discomfort.

According to a Dr. Stuart Grassian, there is a specific syndrome that is persistent among solitary confinement inmates with very real and very dramatic effects.

Hyperresponsivity to external stimuli, meaning the inmate becomes increasingly sensitive to sounds, movements, etc. is one of the symptoms. “You get sensitive to noise — the plumbing system. Someone in the tier above me pushes the button on the faucet. … It’s too loud, gets on your nerves. I can’t stand it. I start to holler. ” (qtd. in Grassian 3).

Other symptoms include perceptual distortions, illusions and hallucinations, panic attacks, difficulties with thinking, concentration and memory, intrusive obsessional thoughts, overt paranoia, and problems with impulse control. Grassian 3-4) If solitary confinement truly was torture, it would also need to have some sort of lasting effect on the victims. Since solitary confinement does not cause physical harm, there are no long term physical effects. However, solitary confinement causes severe psychological anguish, and results in long term effects.

The studying of P. O. W. camp veterans shows that the short term effects of the Delirium-like state regress with time, but long term effects begin to surface and become noticeable. Dr. Stuart Grassian says about long term effects of solitary confinement that “These not only include persistent symptoms of post traumatic stress (such as flashbacks, chronic hyper vigilance, and a pervasive sense of hopelessness), but also lasting personality changes — especially including a continuing pattern of intolerance of social interaction, leaving the individual socially impoverished and withdrawn, subtly angry and fearful when forced into social interaction. ” (13) He found an identical pattern of change in inmates that went through long periods of solitary confinement years ago (Grassian 13).

For something to be considered torture it has to meet two criteria. It must (a) cause some sort of physical or mental pain or discomfort, and (b) must have some sort of lasting effect upon the victim. Solitary confinement clearly causes mental pain and discomfort. The psychological effects are so severe that they even cause inmates to physically mutilate themselves without even being aware of their actions or being able to control themselves. “I cut my wrists many times in isolation. Now it seems crazy.

Since it is torture, and undoubtedly cruel and unusual punishment, it should be stopped. There are more constructive and humane ways to discipline criminals no matter how severe their crime than solitary confinement. If out prison systems have to resort to torturing its prisoners and calling it discipline then there’s a problem. The prison systems in the United States are in serious need or a reform, and outlawing solitary confinement is the first step that needs to be taken. 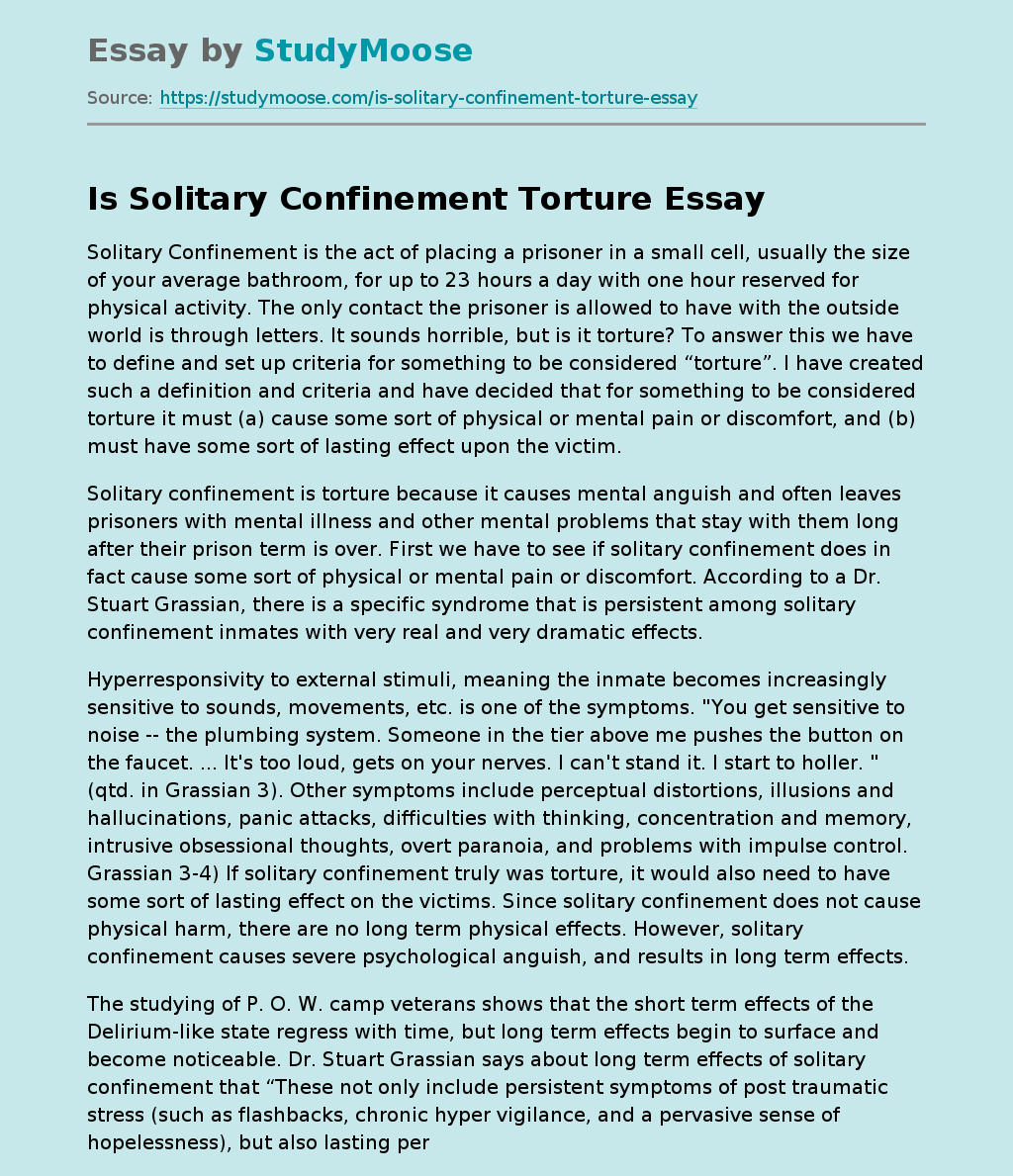