“A man who waits to believe in action before acting is anything you like, but he is not a man of action. It is as if a tennis player before returning the ball stopped to think about his views of the physical and mental advantages of tennis. You must act as you breathe.” – Georges Clemenceau Is it true that acting quickly and instinctively is the best response to a crisis? Or are there times when an urgent situation requires a more careful consideration and a slower response?

Differentiating circumstances determine the best course of action to take whether it is a carefully constructed and slower response or a quick instinctive reaction to a crisis; it all depends on the level of urgency and time and resources available.

Literature and history have shown how different responses may have a positive or negative outcome. Events of the past illustrate what type of response is the best for certain situations such as the carrying out cardiopulmonary resuscitation or the planned escape of Romeo and Juliet in the play Romeo and Juliet by William Shakespeare or the response to America’s division in 1860 over the possession of African American slaves resulting in the American Civil War of 1861-1865.

Situations which may determine life or death with a very short time span available always need a quick, urgent and instinctive response. A response like one to perform CPR on a stranger suffering a cardiac arrest, this response is initiated by the natural human instinct to protect and save another’s life.

An urgent situation such as this one has only one response method and that is one of action as acclaimed by Georges Clemenceau as every second wasted adds to the possibility of death of the patient.

Many situations especially those involving relationships need an objectively assessed response planned, a response with an absence of subjective emotion. The play Romeo and Juliet by William Shakespeare exemplifies this notion. The two lovers act passionately out of emotion and adoration for the other that they do not fully consider the outcomes and results of their actions. In this scenario either an objective observer or a rational decision from an insider needs to occur to determine their paths of action. Because they both acted irrationally and emotionally influenced it resulted in the eventual heartbreaking demise of both Romeo and Juliet.

History proves the embody the ideals of planned responses as a course of action to an urgent situation like one of divided nationalism and prospective anarchy. Close to the start of the American Civil War in 1861, America was divided between the southern states defending their right to slavery of African Americans and the rest of the country. The southern states in general rebelled against Lincoln’s leadership and denied his authority over them leading to imminent anarchy that he was forced to go to war in order to reassert that authority and leadership and unite the country. Up until this present day it is still debatable whether he should or should not have gone to war but it opens up the questions and the possibilities of a calmer planned response.

The atrocities of the American Civil War shed light on the ideals of a slower planned reaction to the crisis. However it is undeniable that either response, instinctive or planned, would have both effective and detrimental effects on the country but to what extent is the question. History, literature and day to day tales of crises and solutions have taught us that the time of response to a catastrophe required is entirely dependent on that certain circumstance and its own level of urgency and time and resources accessible.

Is It True That Acting Quickly and Instinctively Is the Best Response to a Crisis. (2016, Oct 21). Retrieved from https://studymoose.com/is-it-true-that-acting-quickly-and-instinctively-is-the-best-response-to-a-crisis-essay 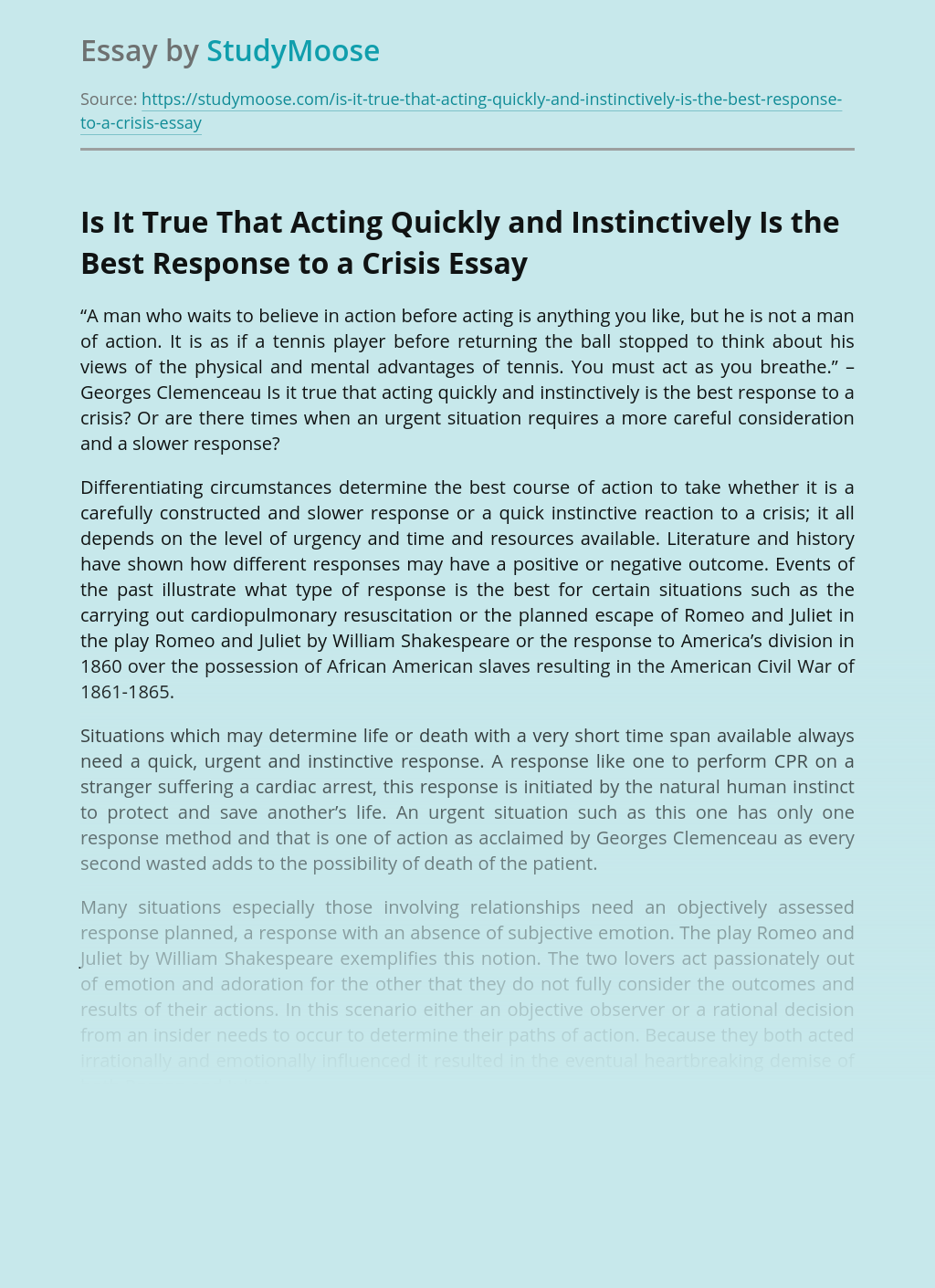 The tragedy ‘Romeo and Juliet’ was first produced around 1595, since when it has been one of William Shakespeare’s most popular plays. Taking place in Verona, Italy, it is set against the background of a constant feud between two rival families, the Capulets and the Montagues. At a party at the Capulet’s house, one of...

Dramatic irony in Romeo and Juliet

There are many instances in which William Shakespeare shapes our modern works of art and literature, doing so by remaining the most spoken playwright of his century. Besides his many privileges, he had used some literary elements that have great discussion in the present day, such as his usage of irony, foreshadowing, unconscious hypocrisy and...

Death is and always will be a hard topic to talk about, especially when someone is to blame. In the play, Romeo and Juliet, written by William Shakespeare, many characters could take responsibility for the deaths of the young lovers, but who is ultimately to blame? In my opinion, Romeo is the main cause of...

Shakespeares Romeo and Juliet and Malorie Blackmans Noughts and Crosses

How is forbidden love conveyed in both Shakespeare’s Romeo and Juliet and Malorie Blackman’s Noughts and Crosses? In Shakespeare’s Romeo and Juliet (c.1595) and Malorie Blackman’s 2001 Noughts and Crosses, the theme of forbidden love is greatly conveyed throughout both texts. The themes are similar in each text, regardless of the severe differences in era...

Romeo and Juliet Analysis of Act 1

William Shakespeare introduces the story of Romeo and Juliet by using a prologue. The function of the prologue is to explain the situation, setting the scene in Verona and the quarrel between the families is old, ‘ancient grudge’. The prologue informs the audience that the lovers are ‘star-cross’d’ and that their death ends the feud...

Soliloquy and Figures of Speech in Romeo and Juliet, Part 4 Eng 2 answer keys

Read the dialogue found in Act II, scene iii of Romeo and Juliet. Romeo: Good morrow to you both. What counterfeit did I give you? Mercutio: The slip, sir, the slip; can you not conceive? Romeo: Pardon, good Mercutio, my business was great; and in such a case as mine a man may strain courtesy....

Why do Sampson and Gregory fight with Montague’s men? They stir up old woes again that occurred in the past and fight. Benvolio and Tybalt come upon the serants fighting. Contrast their reactions to the fight. Benvolio does not want to fight, but Tybalt fights and is angry. When Montague and Capulet enter and see...