Is Bottled Water Worth It?

In somewhat recent discussions, one of the worlds favorite grab and go drink has come into question whether it’s safe enough to drink or not and that is, bottled water. A well-known convenient commodity to everybody, but some argue it is neither healthy for our environment, our pockets, or ourselves. The people from this perspective say bottled water deserves to be banned because the negatives indeed out weigh the positives. On a different side of the spectrum others use bottled water’s good marketability, convenience and it being a better alternative to soda and other sugary drink found in schools as excuses to keep bottled from being banned.

Don't use plagiarized sources. Get your custom essay on
“ Is Bottled Water Worth It? ”
Get custom paper
NEW! smart matching with writer

Another interesting view expresses the fact that bottled water is silly in itself but it still should not be banned. So the question is to be banned or not to be banned?

Millions of people drink it a day but do they ever question whether what may be in the water they’re drinking? Probably not, nor should they have to.

The Environmental Working Group (EWG), a nonprofit organization that strives to protect the public health and the environment using public information (Langwith 1), had one of the United States leading water quality laboratories test 10 commonly bought bottled water brands in 9 states and in the District of Columbia. What they found might be astonishing to some. They found these brands tested contained a total of 38 chemical pollutants and an average of 8 contaminants in each brand. A third of the chemicals found were not even regulated in bottled water (Langwith 2).

Some of the chemicals and pollutants that were found in these 10 brands were things from disinfection products to caffeine and pharmaceuticals. Heavy metals and minerals like arsenic and radioactive isotopes were also found (Langwith 2).

It is also not mandatory for bottled water companies to inform their customers when they get contaminants in their water (Langwith 3). So essentially, you don’t know exactly what your getting when decides to drink bottled water.

Besides the effects it has on our health it also wastes our money. Two of the brands that were tested, Wal-Mart’s Sam’s Choice and Giant Acadia, were found to be chemically indistinguishable from tap water (Langwith 3). Basically people are just buying they’re water back for 1,900 the price of the tap water they could be getting at their homes for much cheaper.

Damaging to the environment as well, out of the 36 billion bottles sold in 2006 only a fifth of them were recycled. The rest of the bottles ended up as litter in places such as landfills, land and in rivers, streams, and oceans. Producing water bottles in the U.S. uses around 1.5 million barrels of oil every year. This is enough energy to power 250,000 homes or fuel for 100,000( Langwith 5). Taking water for plastic bottles puts quite a strain on our rivers, streams, and community drinking water supplies. When water isn’t bottled from a municipal supply these companies must draw it from groundwater supplies, rivers, springs or streams (Langwith 5).

Some people view bottled water as a good thing from a marketing point of view and a way to help children in general and in schools. With obesity rates rising in the United States claiming that 17 percent of children in the United States are overweight. Bottled water could be used as a healthier alternative then all the sugary sodas and other drinks that are found in schools. Schools and companies are trying to make bottled water a fun and healthy. Nestle, a bottled water manufacturer came up with the Aquapod, which is a rocket ship shaped bottle to attract the younger buyers (Tucker, Sprague 3). Other brands have also made fun water bottles as well.

Bottled water is a constantly growing business. During 2007, bottled water accounted for 17 percent of the non-alcoholic beverages. By the year 2011 the bottled water market grew about 48.5 percent (Tucker, Sprague 3).

Charles Fisherman provides an interesting view to the subject stating that bottled water is silly, yet it shouldn’t be banned. He gives an example of the silliness of water bottles with the company Pellegrino and how they wash their bottles with Pellegrino water. But he also says banning water bottles wont teach anyone anything. Regardless there will still be soda and other drinks available that are high in sugar for people to consume. People also need bottled water on campuses because they’re water fountains are dirty and unsafe to use (Fisherman 2).

Though these arguments give valid points but do not address the effects that bottled water may have on ones health and environment that in turn is more important then its marketability and how convenient it may be.

Is Bottled Water Worth It?. (2016, Dec 28). Retrieved from https://studymoose.com/is-bottled-water-worth-it-essay 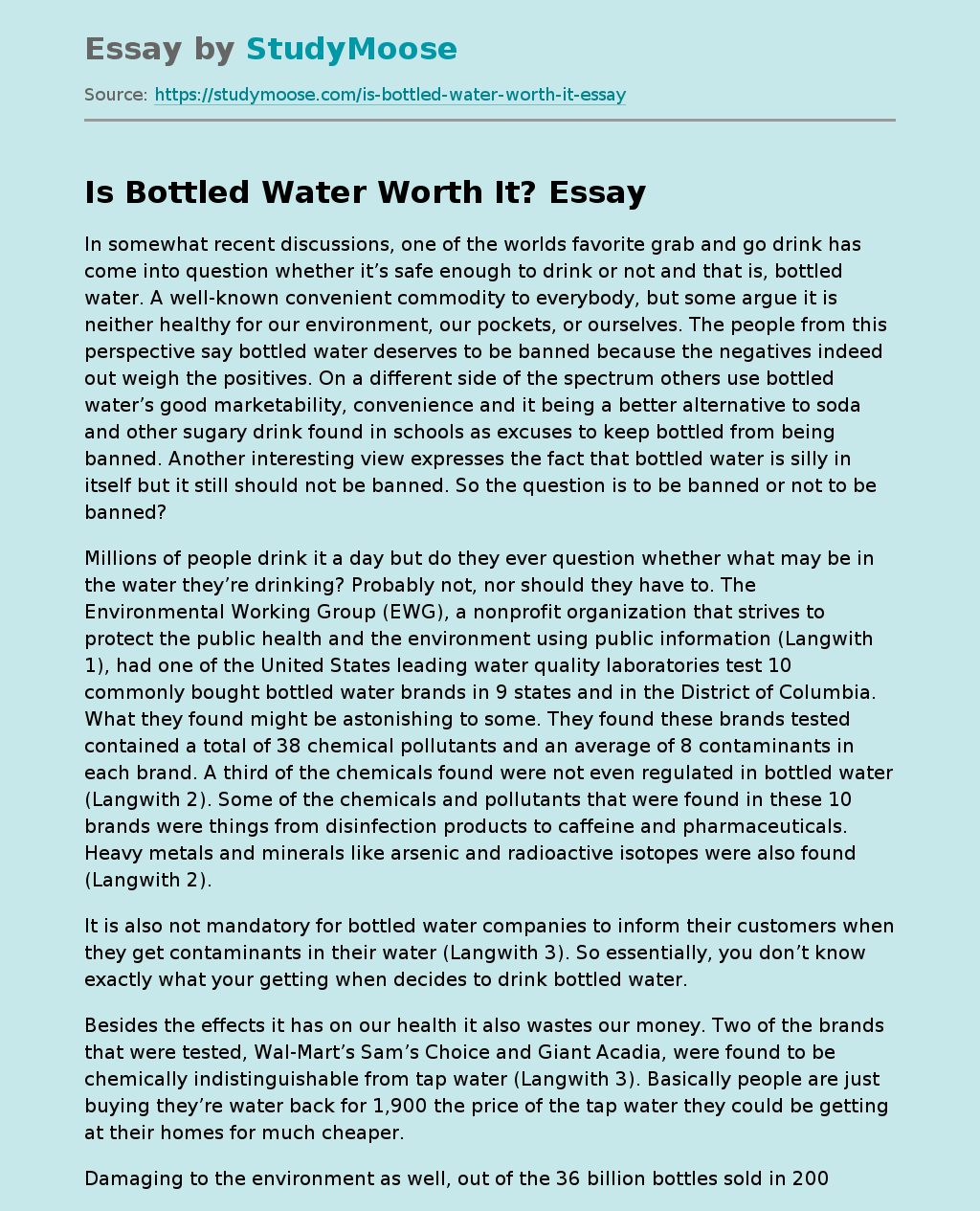