The United States is unquestionably the strongest military and economic power in the world today, but other great empires have crumbled and America will suffer the same fate if even its own citizens and its friends around the world ever lose faith that America acts in the name of liberty, for the sake of democracy. What does this statement mean? The author of this statement was trying to express that no matter how great a nation is, if the citizens of the nation and other nations began to lose faith, then the nation could eventually fail as others have in the past.

Don't use plagiarized sources. Get your custom essay on
“ Is America Still The Greatest Nation Politics ”
Get custom paper
NEW! smart matching with writer

No matter what the nations’ moral or ethical makeup is, without individuals willing to stand up and defend it there will be no nation. This does not always mean military actions it also includes global economic stabilities and global partners that are willing to back a nation up during all phases good or bad.

Is the world stage losing faith in American acts? Some may argue all you need to do is look at the way America uses the military to force our ways on other countries (i.

e. Iraq or Korean War), or the way we are currently dealing with our own fiscal issues. America is one of the biggest nations in the world and we do have a large presence in the world community. One of the best examples of our presence would be that of our military. “The Pentagon currently owns or rents 702 overseas bases in about 130 countries and has another 6,000 bases in the United States and its territories” (Johnson).

Even with this massive presence overseas it doesn’t make us immune. The greatest example would be 9-11 and the flack we caught when invading Iraq. I remember after 9-11 happened may were in arms for getting even with the individuals that did this to America, but when President Bush decided to invade Iraq some attitude changed. People both globally and here at home began having doubt in the American government. The American economy also has caused doubts not only across the nation but also world, a perfect example would be the credit downgrade that America received. “[The] credit agency Standard & Poor’s lowered the nation’s AAA rating for the first time since granting it in 1917â€¦one notch to AA-plus” (Foxnews). This credit rating drop changed many views on America and made many wonder what would the government do to fix the issue.

Throughout the 20th century America has found itself in several challenges to overcome, both at home and overseas. Two examples of how America has strong backing would be during the Great Depression and World War II. One of the biggest challenges it had to overcome was the Great Depression, it was an easy time for Americans to give up, but they didn’t. The government had to step in and help restart the economy and it took several years to bounce back. Without handwork and strong support from the people, even though struggles, America may not have been able to recover. Another great challenge that America had to endure was World War II. Once Japan attacked Pearl Harbor, America had to face a great war on two different fronts, the Pacific and European wars. As the war progressed women had to replace men, who went to war, in factories. The American people were also called to help support the war by selling war bonds to raise money for war efforts. This along with rationing of precious goods such as “gas, tires, sugar, coffee, meat, butter, alcohol” (Ayers 687) showed support from the American people. A great example of America not having support from home or overseas would be the Iraq War. After 9-11, President Bush was able to get the Patriot Act passed “which gave broad powers to combat terrorism” (Ayers 874). The President saw a threat in Iraq and wanted to make sure that the American people were going to be safe. After not receiving very little support from the United Nations in the decision to attack, he decided to take action. After the initial shock and awe the resentment began to grow from within the United States and around the world.

Looking back on the 20th century and the present day, I do believe that America still has a strong presence in the world. One of America’s biggest strengths is the military. As stated earlier we have strong overseas presence both on land and sea. We have numerous bases overseas, in Japan and Europe, and with the greatest Navy in the world we can be off a country’s coastline within a few days ready to drop bombs if needed. Our economy, even with the tough times we are going though, still is able to produce more goods and services than most of the world. Prices throughout the world still use the U.S. dollar as the standard currency to base prices on. Most countries, including the ones that despise Americans, either follow our culture or try to copy what we are doing. They follow our music, movies, celebrities, and even wanting our freedoms. Though my experiences of traveling the world, when I was in the military, no matter what culture you find yourself in there is some type of American influence that can be found. This is why I believe that American still hold a strong stance in the world community.

In my personal opinion, I don’t think Americans are losing faith in America, I think we (as a whole) are losing faith in the government. The decisions that law makers are currently making to balance the budget has been a fight that’s been going on for years. Most of the individuals I talk to feel that instead of trying to fix the problem at hand, the government tries to make due on campaign promises and kick the problem down the road. Several issues such as jobs being sent overseas (to places like China and Korea), the military budget, they fiscal cliff, and entitlements are causing Americans to lose faith in the way the government to trying to control the spending. If we as a country, both government and the civilian population, are unable to control the debt and get ourselves back to a fiscal economy the we will lose our place as an economic power. There are other countries that are building up and are ready to take over as the strongest nation, both economically and militarily, i.e. China. This could take several years to accomplish but if things don’t change it could be reality.

History shows that if we as American people are willing to stand up for the founding principles that out forefather stated, then the American dream can still survive. If we currently continue down the path we are on we could become a second rate in the world as a whole. Even if this takes place and the world looks at us differently down the road, I still believe that American’s as a whole will not lose faith and will continue to fight for what America stands for. 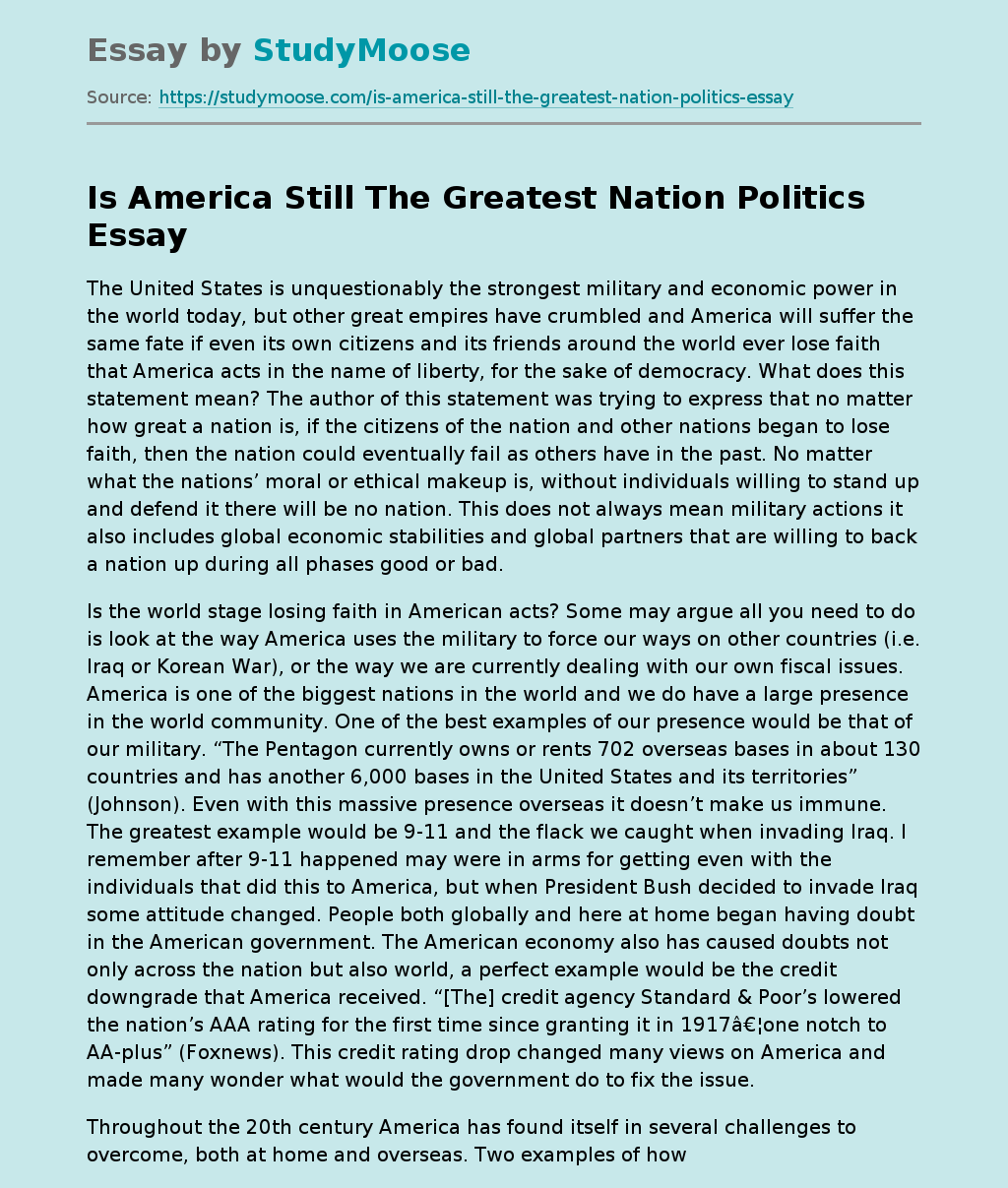