Ireland is Back Baby!

The good times are here again. There is full employment with unemployment at just 5.3% of the workforce for September 2019. (Fahy, Graham). The dark days of the global economic crash in 2008 are a distant memory for some and for others its’ an experience they were not alive for – say hello to our Generation Z (people born in the late 1990s to early 2000s). But there is a ringing bell of alarm that all is not well with the economy, and it refers to the housing problem and the knock-on effect of gentrification.

Don't use plagiarized sources. Get your custom essay on
“ Ireland is Back Baby! ”
Get custom paper
NEW! smart matching with writer

As the old adage goes all that glitters is not gold. The new recovery brings with it a documented volatile housing market, homelessness and gentrification (O’Brien, D). This paper will address what can be done to stabilize this market and what steps the Irish Government could take to alleviate and if possible, to negate the negative impacts of gentrification.

Gentrification even saying it sounds rather grand. The phrase was first coined by sociologist Ruth Glass in the 1960s.

She utilised it in her book “London: Aspects of Change” to describe the changes that were occurring in the city by saying that “One by one, many of the working- class quarters of London have been invaded by the middle classes – upper and lower.

Once this process of ‘gentrification’ starts in a district it goes on rapidly until all or most of the original working- class occupiers are displaced and the whole social character of the district is changed” (www.bartlett100.com). It can present in many ways such as boutique hotels, bustling cafes and trendy hipster joints. So far not a bad thing and it is something that residents can enjoy if they are willing to pay over the odds for an avocado sourdough ensemble, organic of course. Equally they can find employment in these new venues which is a welcome development with residents saying that “That’s not the problem, people coming in and opening up shops that were closed for 20 years and turning them into a hipster caf?, the locals buy in it, work in it, that’s not the problem” (Meskill, T).

However, for some residents it simply means that they are priced out of the local neighbourhoods where their families have lived for generations and it is happening in Dublin. Dublin is becoming a tale of two cities which has negative consequences. During the economic boom of the early 2000’s the Irish population felt that the rising tide of its economic boom was able to lift all boats and whilst the spoils would not be split exactly even most residents would benefit, it was ” a rare example of a developed country with a growth record to match East Asia’s, as well as enviably low unemployment and inflation, a low tax burden and a tiny public debt” ( Peet, J). That was considered good enough. However, then the economic crash occurred circa 2008 and Dublin was in danger of becoming a wasteland devoid of employment and opportunities for its citizens.

In 2012 its unemployment rate was recorded as 14.8% (www.finfacts.com). But Dublin had an ace up its sleeve in the guise of its very attractive corporation rate which stands at just 12.5% and is an attractive location for global companies. Dublin is currently the European Headquarters for companies such as FaceBook, Google, Amazon and Airbnb. The jobs in these companies are pitched at highly educated personnel and is in no doubt contributing to the average rent demanded for a 2- bed apartment in Dublin at a cost of 1,893 (Hamilton, P). The average earnings for a Facebook employee stand at 60, 344 in comparison to the average Irish earnings of 36,628 (www.payscale.com). These exorbitant rents are pricing the locals out of the rental market and forcing some to move away from their immediate families, familiar surroundings and into the suburbs which is a different kind of living experience compared to that of an inner city.

Ireland is Back Baby!. (2019, Nov 25). Retrieved from https://studymoose.com/ireland-is-back-baby-essay 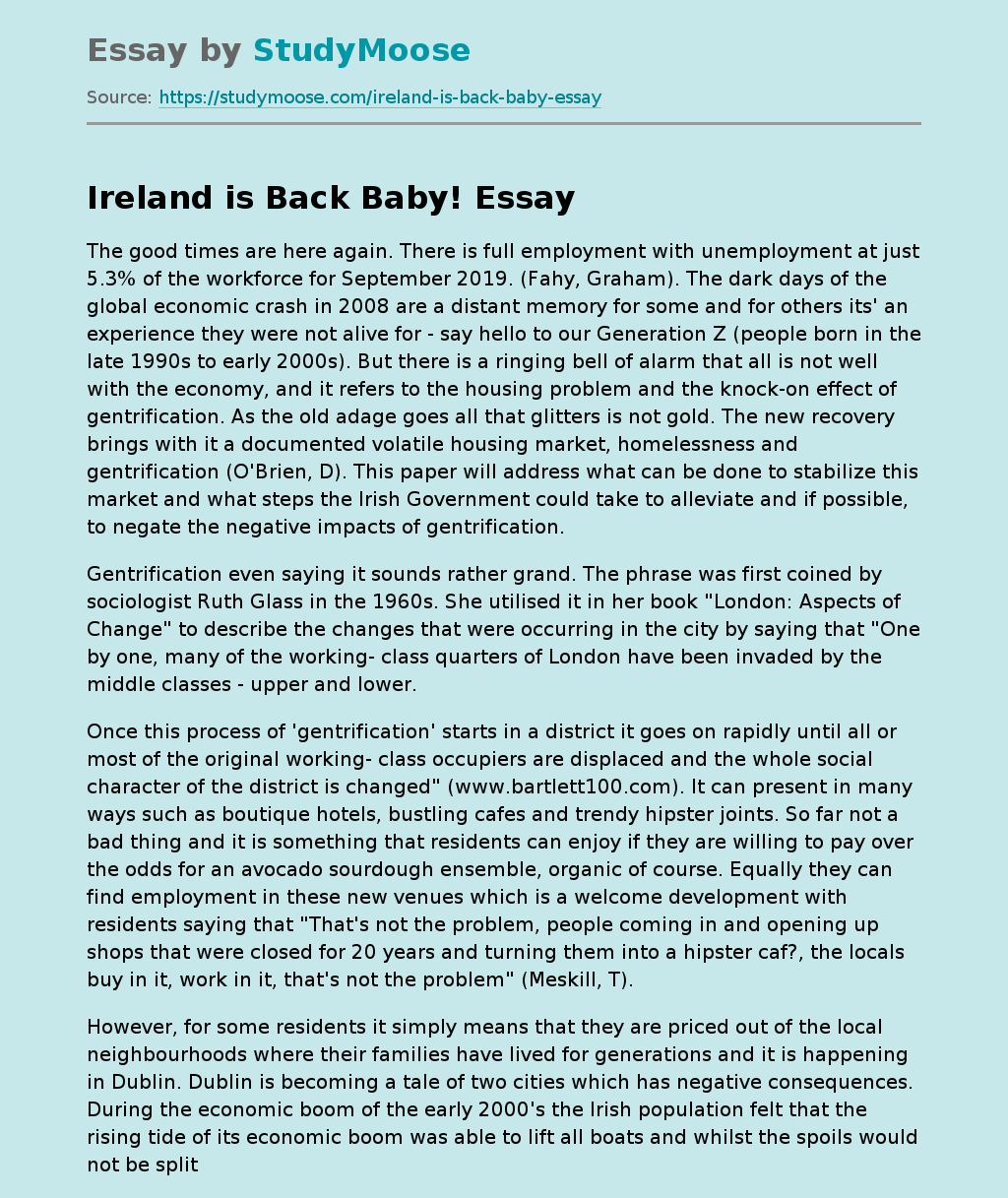