Educated, illiterate, professional, stay at home moms, all of these have the same thing in common. Majority of them all have some type of smart phone whether it is an Android or IPhone. Fifty percent of American adults have a smart phone (cite this). Smart phones tie into everyone’s life at some point. Whether you are an adult looking to replace your phone or if you are trying to decide what phone to buy your child or mom. IPhone and Android have a great amount of similarities, at the same time they have a great amount of differences.

Turn in your highest-quality paper
Get a qualified writer to help you with
“ IPhone vs. Android ”
Get high-quality paper
NEW! AI matching with writer

For example, different software includes: jellybean, ice cream sandwich, honeycomb, froyo, éclair, donut, and cupcake (Cupcake, Donut, Éclair, Froyo 1). Google wanted a different name for their software and not just the standard names so they came up with desserts in alphabetical order as their software names (Cupcake, Donut, Éclair, Froyo 1). In essence, you will rarely see two different types of android with the exact same software but the same base of software powered by google (IPhone vs. Android 3).

IPhone has a more unified platform; iPhone has Apples software.

The software for iPhones are the same on every new iPhone that comes out. It includes the MobileMe, which allows users to sync what is on their phone to their other apple products; that way you do not have to reenter and retype information that is on your phone into your iPad (iPhone vs. Android 3). In contrast Android is made up of mostly Google based software and there is always a tie to google somewhere within the android. Whereas the iPhone has certain google elements for example push Gmail, email notifications, Calendar, and contacts via GoogleSync. All of these are branches from having a Gmail account. When having these applications on your android you have to sign into your google account first and from there you will be able to have your email come directly to you phone, your calendar will automatically connect to your email. When you go online to Gmail you will be able to see new mail, same with the contacts.

The best part about the contact sync is that if you were got a new phone you can log into your Gmail account and the contacts that were saved there will be in your new phone as well. iPhone has a few of the google elements for example you can buy an application that will allow you to sync your calendar and contacts but the application will not work as well as the google one does that comes on the Android before you buy it. The software’s between the two phone types have more differences than similarities as well as space and cost of the phones.When it comes to the space, user friendliness, and cost of an Android and an iPhone they are very different. Most androids have a screen around 3.7 to 5.55 inches. Having a larger screen sometimes helps for easy access, at the same time it could be harder to work with the larger screen because you may not be able to hold it in one hand. The android comes with a microUSB slot, which is the plug for the phone charger but it also has a duel function of helping one connect the phone to a computer. In case you want to save your pictures on your phone to your computer, you can plug it into your computer. Most androids also come with a user-changeable battery, that way if your battery stops working you will be able to get a new one and replace it yourself. Androids also come with removable storage also known as a SIM card. This comes in the phone and stores and saves different things to give your phone more memory.

In contrast iPhones have a screen size of 3.5 to 4.90 inches. It makes the phone easy to access and is able to be held in one hand. You can get iPhones with a storage capacity from 8GB up to 64GB grant it the cost gets more expensive the higher the number of gigabytes. Having this much storage on your phone is very nice for downloading applications, downloading music, having pictures, and for contacts. IPhones also come with a built-in-battery with five hours of talk time. Five hours of talk time seems like a lot to the average person, but if you are a business person that could be really helpful if you have to talk on the phone a lot to do your work. For example, if you own a company and you are going on a road trip with your family your workers may need to get into contact with you and you might need to talk on the phone for an extending amount of time, you have up to five hours of talk time. IPhones have a greater internal storage than androids do. IPhones also have a greater number of talk-time hours. Android has an estimated 6-hour usage time whereas IPhone has an estimated 10 hours of usage time. This usage time comes in handy for parents. Parents use their phones all day when at work or when they run errands then when they are spending time with their children; their children like to play games on their parent’s phone so your battery should still be charged. Android has one up on IPhones in the fact that it has a removable battery.

In an iPhone if something happens to your battery you have to get a new phone. Compared to most Androids when something happens you can simply buy a new battery and replace the old one. In the way of the user friendliness and space the android and iPhone could not be any more different. It is easier to access and have an iPhone due to the smaller screen, bigger internal storage, and the longer battery life than an Android. As you now see there, are some similarities and differences between iPhones and androids but overall both types of phones perform the same function just in different ways: with different software’s, and different spaces and user friendliness levels. I feel that it is your choice on what phone you would rather choose based off of the information you have learned. It all depends on your personal preference of what you like in phones. Look at the facts and choose which phone suits you the best. When you get your next phone; or when you buy your child their next phone think about it is you would like to do on it and consider getting an Android or an iPhone.

IPhone vs. Android. (2016, May 17). Retrieved from https://studymoose.com/iphone-vs-android-essay 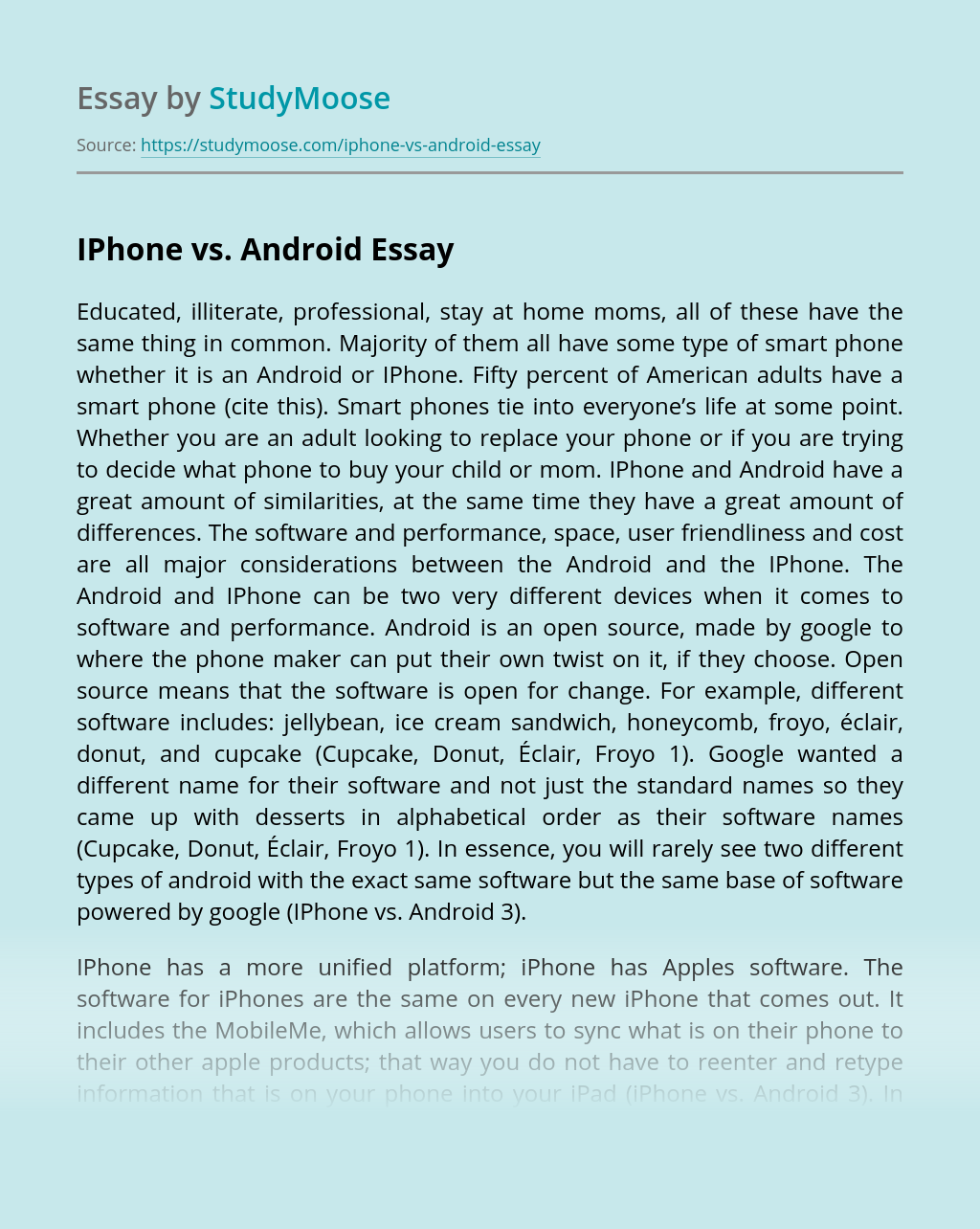 Turn in your highest-quality paper
Get a qualified writer to help you with
“ IPhone vs. Android ”
Get high-quality paper
Helping students since 2015
Stay Safe, Stay Original