A transaction processing system, or TPS, is a system to capture and process the detailed information necessary to update data on the fundamental operations of an organization. A transaction is essentially a single event that changes something. There are many different types of transactions.

For example, customer orders, receipts, invoices, payments, etc. The actual processing of transactions includes the collection, editing, manipulation and storage of data. The result of processing a transaction is that the records of an organization are updated to reflect the new conditions at the time of the last processed transaction. [http://education-portal.com/academy/lesson/transaction-processing-systems-tps]

TPS will be the type of structure of the proposed system where it can help the owner and staff to process large amount of item’s data in the company and to process of transactions in the customer.

Inventory management software is a computer-based system for tracking inventory levels, orders, sales and deliveries. It can also be used in the manufacturing industry to create a work order, bill of materials and other production-related documents. Companies use inventory management software to avoid product overstock and outages. It is a tool for organizing inventory data that before was generally stored in hard-copy form or in spreadsheets. It is often associated with and is similar to distribution software, as distributors that can compete with less cash tied up in inventories have a distinct advantage over their competitors.

[http://en.wikipedia.org/wiki/Inventory_management_software] The proposed system is inventory management software for Miguel’s Home Merchandise. This is the software where can be store and monitor item’s data.

Point of sale (also called POS or checkout, during computerization later becoming electronic point of sale or EPOS) is the place where a retail transaction is completed. It is the point at which a customer makes a payment to the merchant in exchange for goods or services. At the point of sale the retailer would calculate the amount owed by the customer and provide options for the customer to make payment. The merchant will also normally issue a receipt for the transaction. [http://en.wikipedia.org/wiki/Point_of_sale]

The proposed system will provide a point of sale system for Miguel’s Home Merchandise. It will help the company for faster and organize customer transaction.

Microsoft Access, also known as Microsoft Office Access, is a database management system from Microsoft that combines the relational Microsoft Jet Database Engine with a graphical user interface and software-development tools. It is a member of the Microsoft Office suite of applications, included in the professional and higher editions or sold separately. Microsoft Access stores data in its own format based on the Access Jet Database Engine. It can also import or link directly to data stored in other applications and databases.

Software developers and data architects can use Microsoft Access to develop application software, and “power users” can use it to build software applications. Like other Office applications, Access is supported by Visual Basic for Applications, an object-oriented programming language that can reference a variety of objects including DAO (Data Access Objects), ActiveX Data Objects, and many other ActiveX components. Visual objects used in forms and reports expose their methods and properties in the VBA programming environment, and VBA code modules may declare and call Windows operating system functions. [http://en.wikipedia.org/wiki/Microsoft_Access]

Microsoft Office Access will be the database management system that the proponents will be using to store and monitor all items’ information and also use for saving all reports.

Visual Basic, also referred to as “VB,” is designed to make software development easy and efficient, while still being powerful enough to create advanced programs. For example, the Visual Basic language is designed to be “human readable,” which means the source code can be understood without requiring lots of comments. The Visual Basic program also includes features like “IntelliSense” and “Code Snippets,” which automatically generate code for visual objects added by the programmer. Another feature, called “AutoCorrect,” can debug the code while the program is running.

Programs created with Visual Basic can be designed to run on Windows, on the Web, within Office applications, or on mobile devices. Visual Studio, the most comprehensive VB development environment, or IDE, can be used to create programs for all these mediums. Visual Studio .NET provides development tools to create programs based on the .NET framework, such as ASP.NET applications, which are often deployed on the Web. Finally, Visual Basic is available as a streamlined application that is used primarily by beginning developers and for educational. [http://www.techterms.com/definition/visualbasic]

Visual Basic 6.0 is providing GUI and it is easily to use because of its drag and drop function. It would be use for all the process of the Miguel’s Home Merchandise. According to history VB 1.0 was introduced in 1991. The drag and drop design for creating the user interface is derived from a prototype form generator develop by Alan Cooper and his company called Tripod. Microsoft contracted with cooper and his associates to develop Tripod into a programmable form system for Windows 3.0, under the code name Ruby (no relation to the Ruby programming language)

Tripod did not include a programming language at all. Microsoft decided to combine Ruby with the Basic language to create Visual Basic. The Ruby interface generator provided the “visual” part of Visual Basic and this was combined with the “EB” Embedded BASIC engine designed for Microsoft’s abandoned “Omega” database system. Ruby also provided the ability to load dynamic link libraries containing additional controls (the called “gizmoz”), which later became the VBX interface.

Software prototyping refers to the activity of creating prototypes of software applications, incomplete versions of the software program being developed. It is an activity that can occur in software development and is comparable to prototyping as known from other fields, such as mechanical engineering or manufacturing.

http://istqbexamcertification.com/wp-content/uploads/2012/01/Prototyping-model.jpg Figure 1 Prototyping Model
Proponents choose this type of methodology because this type of method can improve the quality and efficiency of the proposed system by testing the code and module in integration testing repeatedly to find the errors in the system before to go to the acceptance and installation, deployment and go to maintenance. This method requires the involvement of the user and they can tell and interact or to give feedback to the development team and know what to change in the system. The development team and the user feedback can provide more changes and improvements in the system.

In summary, inventory management software and point of sale would be the goal of the proposed system. It would include the all process of company wherein the proponents will be making an Inventory System with POS for Miguel’s Home Merchandise.

The proponents will be making use of the following software to come up with the system: Visual Basic 6.0 and Microsoft Access for the database. 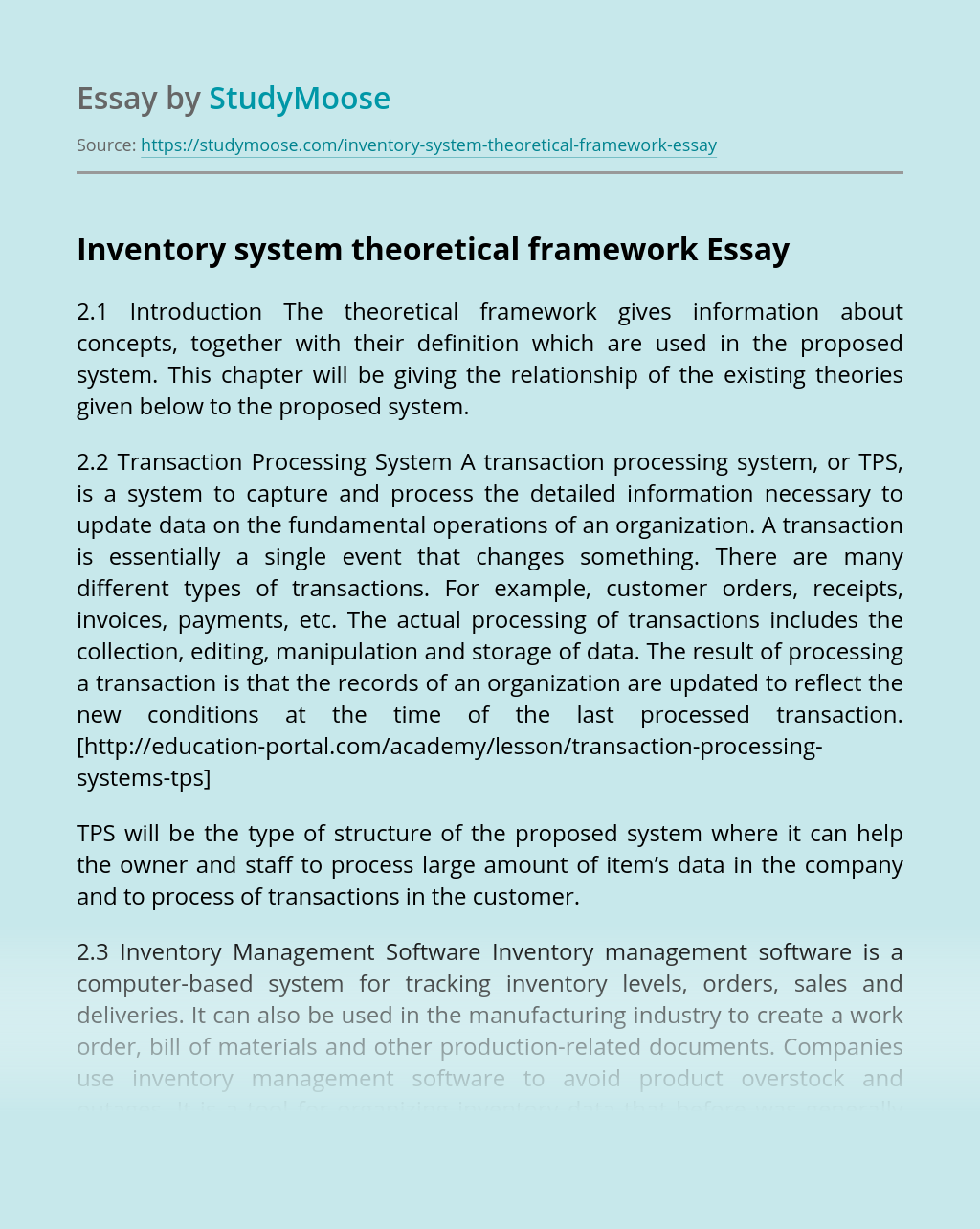