The term “barcode inventory system” is generic and encompasses avariety of different applications and industries. The term is commonly used in warehousing, logistics, and distribution; it can also be used in retail point-of-sale, manufacturing, and various service sector implementations.

This term refer to the concept of data collection that run on script that will be developed.

It is important that the system will automatic, by detection of the computer hardware and software component and then store the data into the database at the same time. The script will be based on JavaScript because it supports the Windows Management Instrumentation (WMI) and Windows Script Host (WSH). Both two components are required to enable the detection of the computer hardware and software function in this system.

It is also installed if Internet Explorer 5 (ora later version) is installed. It provides scripting capabilities comparable to batch files, but with a greater range of supported features. Beginning with Windows 2000, the Windows Script Host became available for use with user login scripts. It is language-independent in the sense that it can make use of different Active Scripting language engines. By default it interprets and runs plaintext JScript (. JS and . JSE files) and VBScript (. VBS and . VBE files). Users can install different scripting engines to enable them to script in other languages, for instance Perl.

The language independent filename extension WSF can also be used. The advantage of the Windows Script File (. WSF) is that it allows the user to use a combination of scripting languages within a single file. The researcher has taken the advantage of the scripting ability by developing a JavaScript file to be used as Automatic Data Gathering engine for Computer Inventory System.

There are a number of different inventory systems starting with the most ancient system to the most advanced system.

The most basic method of inventory tracking is physical counts. A lot of firms relied on physical count to try and figure approximately where they were at.

Two-Bin System The two-bin system is only slightly more sophisticated than the physical count system. Using the marvels of modern technology, this system uses two bins of materials. When one bin is empty, it’s time to re-order.

The demand can be tracked by batches of inventory usage, such as demand that is entered once a week or they can enter in real time which provides the ability to continuously monitor inventory levels. If we are already in the practice of counting demand, this is a great way to track inventory because it involves little additional effort. It was ideal because there is little variability in the products that are demanded. For a supermarket, this can be more difficult because of the variety of products sold.

System analysis is the process of understanding and specifying in detail what the information system should do. This involves all the data gathered during the previous interviews with the subject personnel as needed by the researcher. This chapter covers on the presentation, requirements and specification of the proposed system. This also shows if the proposed system is feasible. System Feasibility Feasibility study is a systematic analysis and performed in advance to the project in order to provide some information about the project whether it should be undertaken or not.

It involves the analysis of the system to determine whether it is feasible to develop the particular system. The feasibility on this proposed system was foreseen to be feasible to the Institution through the following factors: Operational This system will be operational feasible considering the fact that it will fasten the processing of the computer laboratory inventory system of Ramon Magsaysay Memorial Colleges. The proposed system will have a user – friendly environment and the flow of the system can be easily comprehended by the user.

Technical The technicality of the proposed computer laboratory inventory system is considered feasible because it was developed to help the staff in managing computer assets,especially when they are going to trace the computers and peripheral and domass upgrade. The purpose of the system is to help the staffs manage the computers inventory more effective and easy way. Using this Computer Laboratory Inventory System, staffs can get information about all computers, monitors and other peripherals that currently exist in the faculty.

They also can trace where all the computers are located in the faculty whether in the computer labs, classes, offices, in the lecturer’s room or anywhere in the faculty. In order for the system to perform better, Computers should be placed in a well-ventilated area and should be well protected to avoid electrical problems. Schedule The Researchers was given an enough time frame to comply the proposed system for the Ramon Magsaysay Memorial Colleges – Computer Laboratory Inventory System. They were given one whole semester to finish the entire system and the study.

This was very sufficient in conducting his study, performing interviews, designing and creating the proposed system. In designing and creating the system, the researchers was also allowed to use the unit in the computer laboratory of the school even extends his working hours during free time only. Economic Feasibility The proposed system is economically feasible to the Institution for the reason that the school will benefit and save money in purchasing the system. System Requirement Specification The system requirement of the proposed system is needed to run efficiently.

If the hardware and the software do not meet the required specification, our system will probably encounter problems. The process of the computer may run slow which may cause delay. Hardware Specification Hardware refers to the physical components of a computer system which is required in the study. Below are the lists of the minimum requirements of hardware components of the computer for the proposed system. Colored monitor Mouse Standard Keyboard System Unit (at least Pentium 3) AVR (Auto-Voltage Regulator) Hard Disk (at least 80 gigabytes) Software Specification

Software refers to the needed and required software applications in order for the proposed study to run and be used. Operating System-Microsoft Windows XP Service Pack 2 or Higher Microsoft Office 2003 Microsoft Visual Basic 6. 0 People The people involved in the proposed system are the direct users. They are categorized as primary users and secondary users. To manage the system the user should be computer literate and able to use and operate a computer so that they will have no difficulties of absorbing the instructions the researcher will have to give during the training period.

This is essential so that they will not encounter problems while using the system. These users will also undergo several seminars or training to familiarize the system. This is highly recommended so that they could easily handle the system to avoid delay and errors. System Requirement Checklist During the requirements modeling, the researcher must have to identify and describe all system requirements. The System Requirements Checklist presents the inputs, process, outputs, performance and controls.

Input – the data’s that are inputted and stored in the database considered as raw material that are being processed to create the necessary information. Process – are the transactions of an establishment being done on the data in thesystem. Output – the report and visual outcome of the processed data. Performance – trapping of errors and outcome of the processing. Controls – the shortcut keys that are used to manipulate the screen. Future Growth, Cost and Benefits This will discuss the benefits of the proposed system.

The implementation of the new system is firmly believed and assured to produce tangible benefits though it has also intangible benefits to the company. Tangible Benefits The proposed system provides assurance to the company that Proposed System will lessen works loads and will provide a better service to the respondents. Aside from that, it can easily generate reports and it will improve the performance of the firm in terms of service. Intangible Benefits Immediate maintenance if there are some necessary technical problems occurs in the System. Scalability This is to test if the new systems will be capable of storing a large capacity of data that can hold information based on the specified needed requirements specifically on the hard disk. In the future growth, the system will reach its discarded period and will not be capable of storing information so the system is recommended to upgrade its program to sustain its operation. The researcher assures that the given hardware and software requirements are reliable and can sustain a large number of information. Enterprise Modeling This presentation contains the sequence in the Computer Laboratory Inventory System of Ramon Magsaysay Memorial Colleges.

For the system to be efficient, the researcher develops graphical presentations about the proposed system. The system flowchart indicates the Proposed Computer Laboratory Inventory system that it could minimize errors on the whole operation compared to the existing system. The enterprise model shows how the entities are related to each other and it also widens our understanding on how the researcher designed the program to perform certain transactions. System Flow Chart, or data flow, is used to describe the flow of data through a complete data-processing system.

Different graphic symbols represent the clerical operations involved and the different input, storage, and output information required. Although the flow chart may indicate the specific program used, no details are given of how the programs process the data. Context Diagram The above diagram shows the whole process done in the proposed Computer Laboratory Inventory system. This is to identify all the major input and output of the system. Data Flow Diagram of the Proposed Computer Laboratory Inventory System A Data Flow Diagram is a graphical representation of the “flow” of data through an information system. 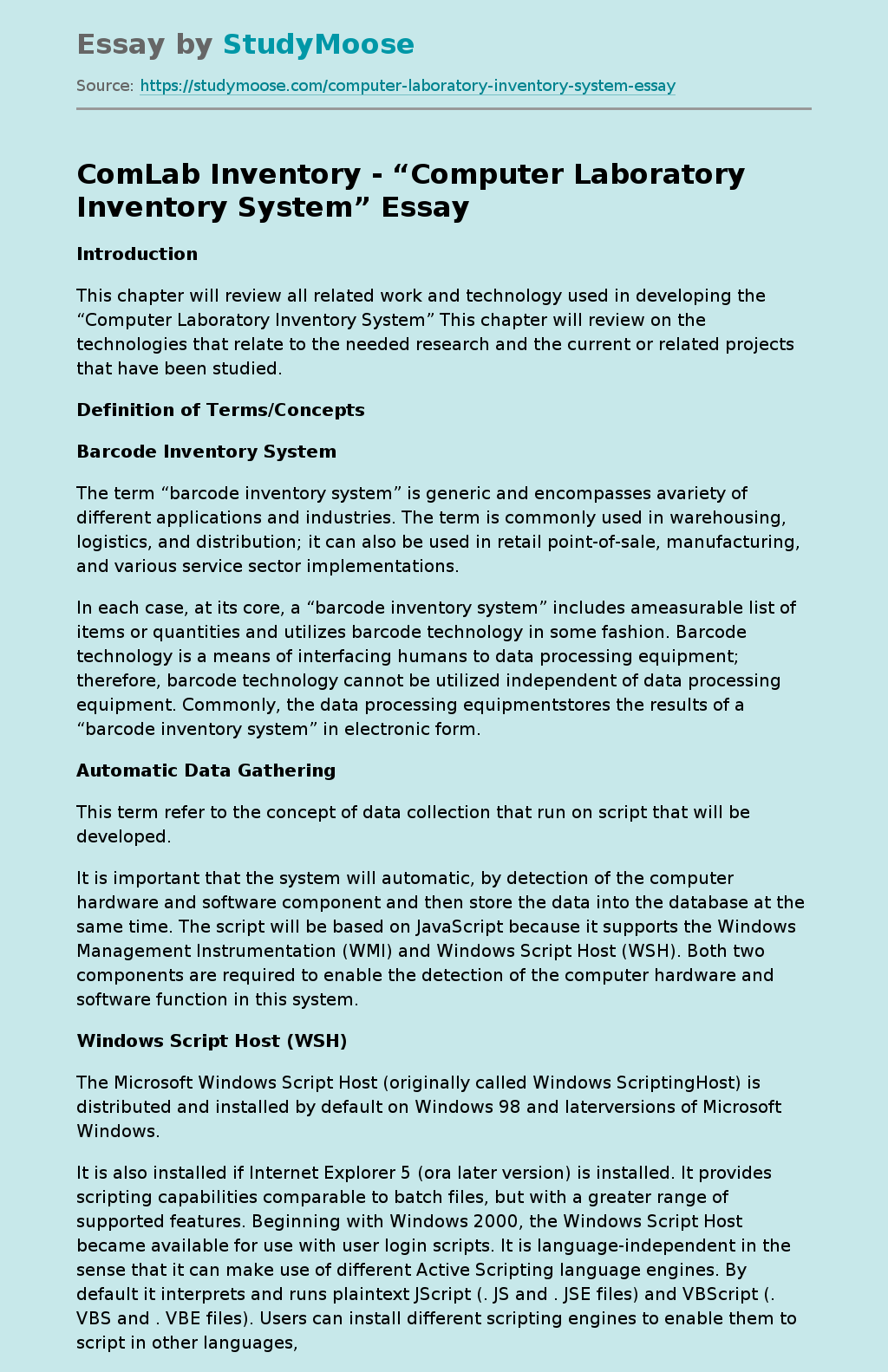