Secrecy is a recurrent theme of Interpreter of Maladies. With reference to at least three stories, what are the causes and effects of this trait on the lines of the characters?

Secrecy is the act of hiding information from certain individuals or groups. Secrecy is often controversial, depending on the content of the secret, the group or people keeping the secret, and the motivation of secrecy. Jhumpa Lahiri’s anthology, “Interpreter of Maladies”, explores this theme through several characters in different stories.

Don't use plagiarized sources. Get your custom essay on
“ Interpreter of Maladies: Secrecy ”
Get custom paper
NEW! smart matching with writer

In the story Interpreter of Maladies, A Temporary Matter and Sexy, the characters hide their emotions and do not express themselves. Due to this, the relationships that they are involved in become dysfunctional. Mrs Das’s infidelity in Interpreter of Maladies puts a strain on her marriage. The secret affair she had with her husband’s friend causes her to hide behind her sunglasses and disengage with her family.

She is selfish and self-absorbed, that she doesn’t realise how her actions would affect the others around her.

This is demonstrated by her, when she refuses to share her food with her children, reluctantly taking her daughter to the bathroom and refusing to paint her daughter’s fingernails. She has not revealed her unfaithfulness to anyone apart from Mr Kapasi and as a result of this she feels the strain in her marriage only as her own pain. Mrs Das fails to recognise, the impact her affair takes on her husband and children. She openly mocks her husband’s enthusiasm for tourism and illustrates her lack of love for her husband.

The puffed rice that Mrs Das scatters across the trail in India, represents her mistakes and careless actions. Physically Mrs Das is young and attractive, but she is spiritually empty. She does not love her children and husband and is caught in the boredom of her life as a housewife. This is evident, when monkeys surround Bobby and terrify him; she refuses to take responsibility to the situation, just as she refuses to acknowledge the affair with Mr Das’s friend. If Mrs Das’s secret is ever revealed, Bobby would be the true victim. Conceived out of anger, boredom and spite and lied to about his father, Bobby is surrounded by deceit.

Lahiri shows that, lack of communication leads to misunderstandings and breakups in relationships. As their electricity gets cut off from 8pm for a few days, Shoba and Shukumar play a game. A game where they tell all their secrets. Every night they played the game, Shukumar would feel Shoba getting close to him, as they used to be before their child passed away. Since the death of their child, Shoba and Shukumar have had less communication. On the last day, Shoba told him, how she desired to move out of the house and has already found an apartment.

Looking at the fact that Shukumar was not there, when their child passed away, gets Shoba angry along with the fact that his still a student and hasn’t got a job annoys her. The relationship ends when Shoba confesses that she had been ‘looking for an apartment’, and has now found one. She thought they had been ‘through enough’, and that it was ‘nobody’s fault’. Shukumar is both ‘relieved’ at the release and yet ‘sickened’ that she had played a game all along while knowing that their marriage was only a ‘temporary matter’. At the end Shukumar reveals that he was actually at the hospital when their son passed away.

You would never be too late to realise your mistake. In the story Sexy, Laxmi always tells Miranda about her cousin’s husband who had cheated on her. Miranda has a similar story that she never told anyone. She had an affair with a married man named Dev. Miranda was attracted to Dev, because he is different to her. When Dev’s wife went overseas, they got together and went out to many places. Miranda preferred to keep Dev a secret from Laxmi, but she didn’t realise how Laxmi’s cousin’s life was similar to hers. When Miranda had to babysit, Rohin (Laxmi’s cousin’s son), she realised what her relationship with Dev was like. She realised the point that she was affecting Dev’s wife and his kids. 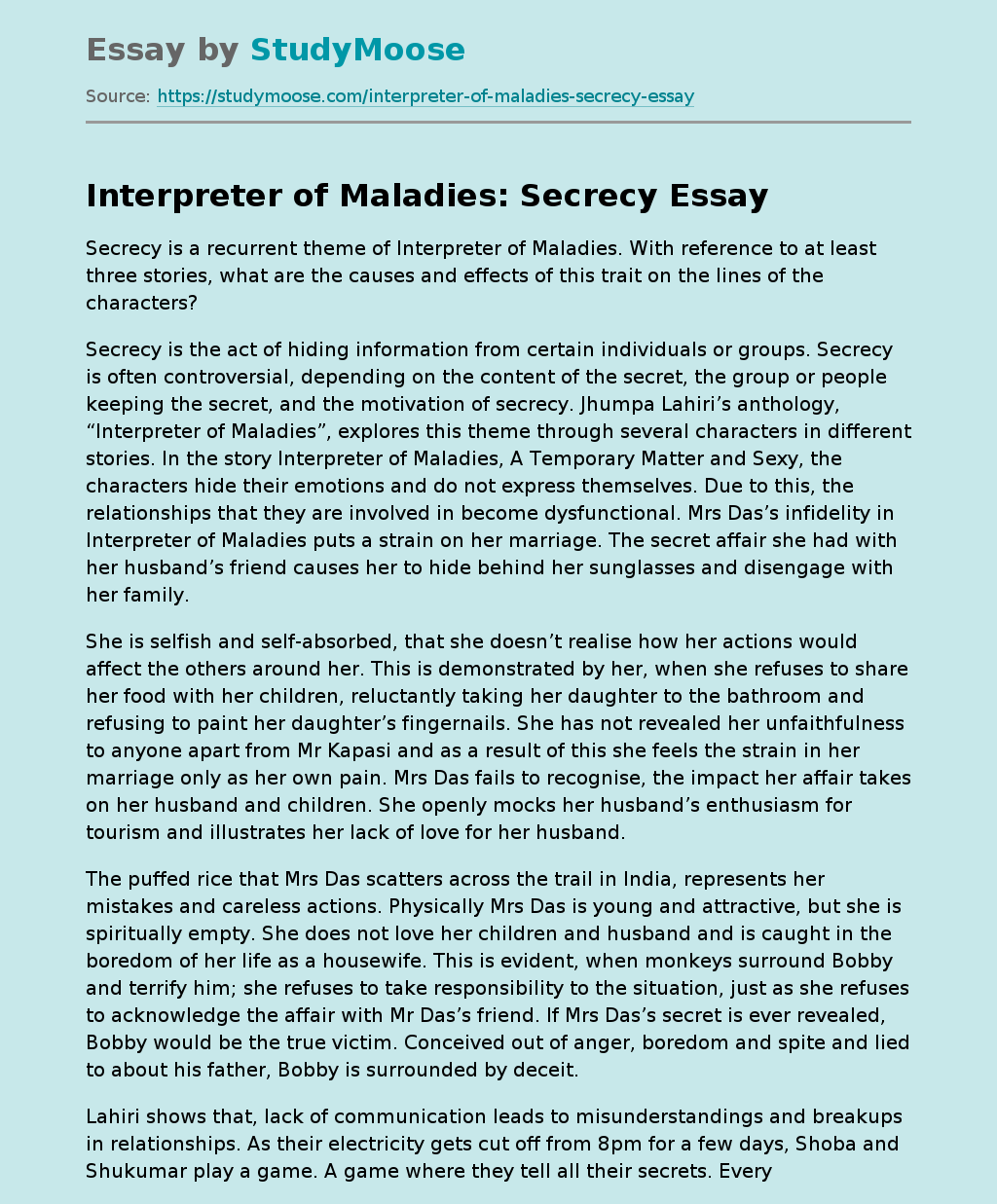