Interpersonal conflict in the Movie "Hitch"

Interpersonal conflict within any relationship is normal but must be carefully resolved so that long term damage doesn’t occur. In the movie, “Hitch” there was a few interpersonal conflicts that erupted. According to Sole, “The way in which each person deals with conflict varies based on experience, personality, and communication style. Often we do not know how we will deal with a particular circumstance until it occurs (Sole, 2011).” This particular film was not shy of conflict; this paper will include ways on how the interpersonal conflict could have been resolved.

Don't use plagiarized sources. Get your custom essay on
“ Interpersonal conflict in the Movie “Hitch” ”
Get custom paper
NEW! smart matching with writer

One of the main interpersonal conflicts in the film was dishonesty of the main character. He was a guy who gets hired by people to hook them up together. He basically coaches and trains them on how to be more desirable. He does a full make over from their appearance to what initially comes out of their mouth. The conflict started when the main character took on a new client who was desperate to date this woman who was like a mogul in her field.

The new client was not the best at establishing relationships with people especially when it came to love interest.

According to Sole, “The parties in an interpersonal relationship also have consistent patterns of interacting and communicating with each other, and these patterns are unique to that relationship (Sole, 2011).” The main characters interpersonal conflict emerged when he engaged in a relationship with a woman that he was attracted to. The woman had later on found out the type of work that he was involved in and she felt that it was misleading to people.

She felt that their whole relationship was based on lies. According to Sole “Conflict can be dangerous because it has a tendency to grow and worsen, but it can also have important benefits that can strengthen a relationship and might even be desirable (Sole, 2011).” The main characters client did end up with his significant other but the main character lost his love interest for a short period of time. According to Sole, “Researchers have found that serious relationship problems arise when those in the relationship are unable to reach beyond the immediate conflict and include positive as well as negative emotions in their discussions (Sole, 2011).”

In this particular movie the characters were using aggressive communication as a means of getting their points across. This could very well be relationship suicide. They should utilize a more assertive way of communicating to each other. While they were arguing they should have found a way to lighten the argument. According to Sole, “In happy marriages, instead of always responding to anger with anger, the couples found a way to lighten the tension and to de-escalate the conflict (Sole 2011).” When it comes to interpersonal conflict all is not lost because of the fact that it could be a healthy factor for any relationship. According to Sole, “some conflict may actually be good for a marriage over time and can lead to the personal growth of both parties—if the negative communication is aimed at the other person’s specific behavior and not at the whole person (Sole, 2011).” This is basically pointing out the actions that an individual took or didn’t take. It’s similar to how you deal with a child that’s misbehaving. For an example you tell the child that their actions were bad and not that they are bad. When you take this type of approach you can salvage a relationship and not affect anyone’s self-esteem. In the long term they will understand how to avoid the same conflict in the future.

Interpersonal conflict in the Movie "Hitch". (2016, Mar 30). Retrieved from https://studymoose.com/interpersonal-conflict-in-the-movie-hitch-essay 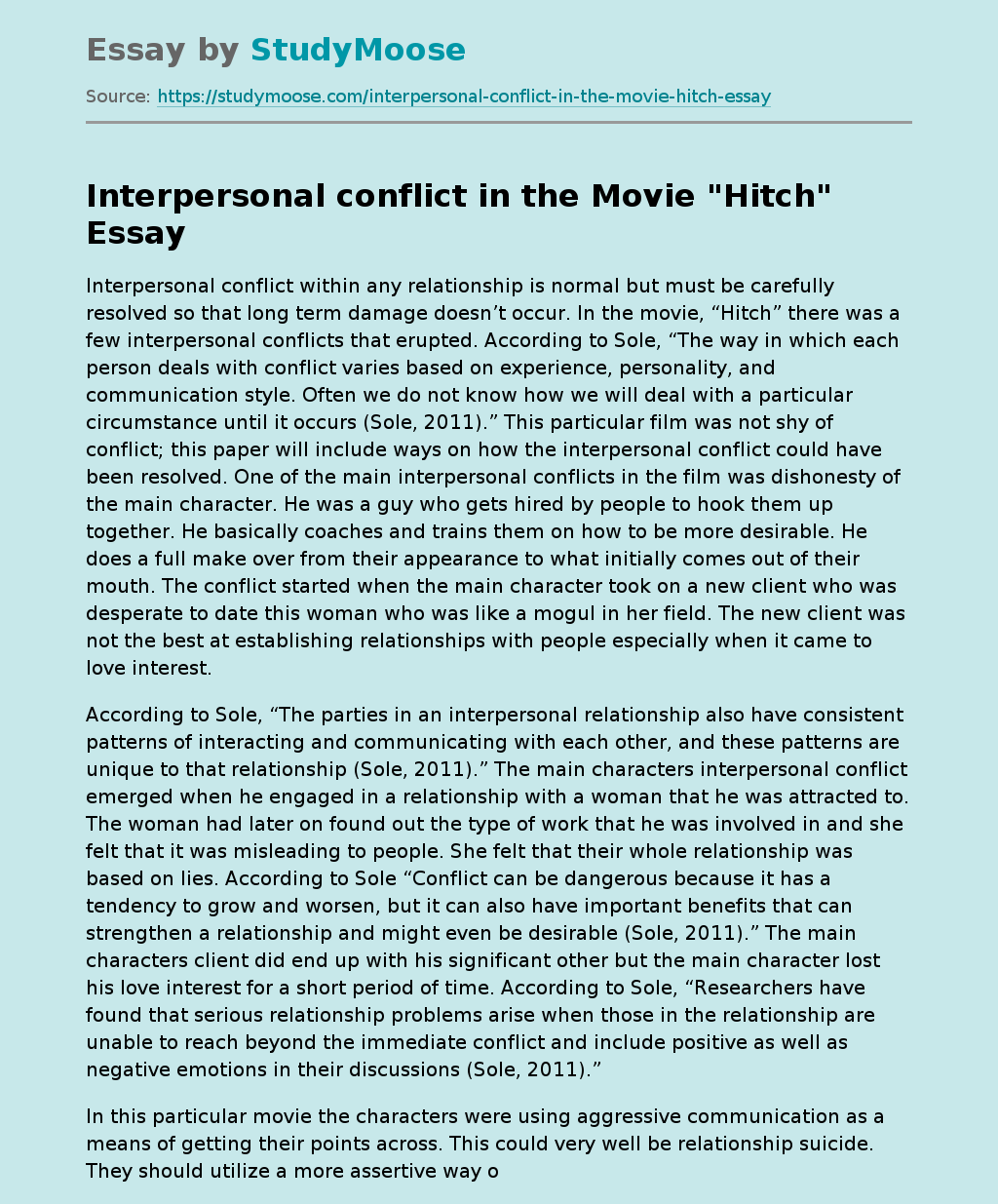