There was need to have a neutral forum where countries could participate and discuss problems that were of significance the world over. This gave rise to international Organizations.

Another function, that has assumed importance in the recent times, is lending out technical cooperation to the member countries. By technical cooperation we mean the provision of intellectual or financial material to the countries, which require them. Amongst all the roles and activities of the international organizations, the most important is negotiating and setting up multilateral agreements. Minimizing the transaction costs can strengthen the cooperation between different countries. Beside they also provide lucidity and information. For negotiations, forums for bargaining are set up and focal point structures are constructed during negotiations. The multilateral agreements that are settled by the international organizations occur in sections like environment protection, development trade, crime human rights, etc. Success and failure of League of Nations

The League itself was a success, as nothing like it had ever existed before. The League was successful in the 1920s in settling disputes between countries. Finland and Sweden argued over which country should own the Aaland Islands. The League settled the dispute in favour of Finland. When Greece and Bulgaria became involved in a border dispute, the League was called in to decide who was right. The League also did very good work in a campaign to stamp out the slave trade and in tackling diseases. In August 1923 five Italian surveyors were mapping the Greek-Albanian border for the League of Nations.

They were shot and killed on the Greek side of the border and Mussolini, the Italian Prime Minister, demanded compensation from the Greeks. When the Greek government ignored the demand, Mussolini ordered the Italian navy to bombard and then occupy the Greek island of Corfu. Italy was also a Permanent Member of the Council of the League. Eventually the League backed Mussolini and forced the Greeks to pay compensation. Then Mussolini had to withdraw his forces from the island. The Corfu incident seemed to suggest that Permanent Members of the Council could get away with breaking the Covenant. It also suggested that while the League could deal effectively with small countries, it could not deal with large countries.

The successes of the League of Nations
In view of the League’s desire to end war, the only criteria that can be used to classify a success, was whether war was avoided and a peaceful settlement formulated after a crisis between two nations. The League experienced success in:

The Aaland Islands (1921)
These islands are near enough equal distant between Finland and Sweden. They had traditionally belonged to Finland but most of the islanders wanted to be governed by Sweden. Neither Sweden nor Finland could come to a decision as to who owned the islands and in 1921 they asked the League to adjudicate. The League’s decision was that they should remain with Finland but that no weapons should ever be kept there. Both countries accepted the decision and it remains in force to this day. Upper Silesia (1921)

The Treaty of Versailles had given the people of Upper Silesia the right to have a referendum on whether they wanted to be part of Germany or part of Poland. In this referendum, 700,000 voted for Germany and 500,000 for Poland. This close result resulted in rioting between those who expected Silesia to be made part of Germany and those who wanted to be part of Poland. The League was asked to settle this dispute. After a six-week inquiry, the League decided to split Upper Silesia between Germany and Poland. The League’s decision was accepted y both countries and by the people in Upper Silesia. Memel (1923)

Memel was/is a port in Lithuania. Most people who lived in Memel were Lithuanians and, therefore, the government of Lithuania believed that the port should be governed by it. However, the Treaty of Versailles had put Memel and the land surrounding the port under the control of the League. For three years, a French general acted as a governor of the port but in 1923 the Lithuanians invaded the port.

The League intervened and gave the area surrounding Memel to Lithuania but they made the port an “international zone”. Lithuania agreed to this decision. Though this can be seen as a League success – as the issue was settled – a counter argument is that what happened was the result of the use of force and that the League responded in a positive manner to those (the Lithuanians) who had used force. Turkey (1923)

The League failed to stop a bloody war in Turkey (see League failures) but it did respond to the humanitarian crisis caused by this war. 1,400,000 refugees had been created by this war with 80% of them being women and children. Typhoid and cholera were rampant. The League sent doctors from the Health Organisation to check the spread of disease and it spent £10 million on building farms, homes etc for the refugees. Money was also invested in seeds, wells and digging tools and by 1926, work was found for 600,000 people. A member of the League called this work “the greatest work of mercy which mankind has undertaken.” Greece and Bulgaria (1925)

Both these nations have a common border. In 1925, sentries patrolling this border fired on one another and a Greek soldier was killed. The Greek army invaded Bulgaria as a result. The Bulgarians asked the League for help and the League ordered both armies to stop fighting and that the Greeks should pull out of Bulgaria. The League then sent experts to the area and decided that Greece was to blame and fined her £45,000. Both nations accepted the decision. The failures of the League of Nations

Article 11 of the League’s Covenant stated:
“Any war of threat of war is a matter of concern to the whole League and the League shall take action that may safe guard peace.” Therefore, any conflict between nations which ended in war and the victor of one over the other must be considered a League failure. Italy (1919)

In 1919, Italian nationalists, angered that the “Big Three” had, in their opinion, broken promises to Italy at the Treaty of Versailles, captured the small port of Fiume. This port had been given to Yugoslavia by the Treaty of Versailles. For 15 months, Fiume was governed by an Italian nationalist called d’Annunzio. The newly created League did nothing. The situation was solved by the Italian government who could not accept that d’Annunzio was seemingly more popular than they were – so they bombarded the port of Fiume and enforced a surrender. In all this the League played no part despite the fact that it had just been set up with the specific task of maintaining peace. Teschen (1919)

Teschen was a small town between Poland and Czechoslovakia. Its main importance was that it had valuable coal mines there which both the Poles and the Czechs wanted. As both were newly created nations, both wanted to make their respective economies as strong as possible and the acquisition of rich coal mines would certainly help in this respect. In January 1919, Polish and Czech troops fought in the streets of Teschen. Many died. The League was called on to help and decided that the bulk of the town should go to Poland while Czechoslovakia should have one of Teschen’s suburbs. This suburb contained the most valuable coal mines and the Poles refused to accept this decision. Though no more wholesale violence took place, the two countries continued to argue over the issue for the next twenty years. Vilna (1920)

Many years before 1920, Vilna had been taken over by Russia. Historically, Vilna had been the capital of Lithuania when the state had existed in the Middle Ages. After World War One, Lithuania had been re-established and Vilna seemed the natural choice for its capital. However, by 1920, 30% of the population was from Poland with Lithuanians only making up 2% of the city’s population. In 1920, the Poles seized Vilna. Lithuania asked for League help but the Poles could not be persuaded to leave the city. Vilna stayed in Polish hands until the outbreak of World War Two. The use of force by the Poles had won. War between Russia and Poland (1920 to 1921)

In 1920, Poland invaded land held by the Russians. The Poles quickly overwhelmed the Russian army and made a swift advance into Russia. By 1921, the Russians had no choice but to sign the Treaty of Riga which handed over to Poland nearly 80,000 square kilometres of Russian land. This one treaty all but doubled the size of Poland. What did the League do about this violation of another country by Poland?

The answer is simple – nothing. Russia by 1919 was communist and this “plague from the East” was greatly feared by the West. In fact, Britain, France and America sent troops to attack Russia after the League had been set up. Winston Churchill, the British War Minister, stated openly that the plan was to strangle Communist Russia at birth. Once again, to outsiders, it seemed as if League members were selecting which countries were acceptable and ones which were not. The Allied invasion of Russia was a failure and it only served to make Communist Russia even more antagonistic to the West. The invasion of the Ruhr (1923)

The Treaty of Versailles had ordered Weimar Germany to pay reparations for war damages. These could either be paid in money or in kind (goods to the value of a set amount) In 1922, the Germans failed to pay an installment. They claimed that they simply could not rather than did not want to. The Allies refused to accept this and the anti-German feeling at this time was still strong. Both the French and the Belgium’s believed that some form of strong action was needed to ‘teach Germany a lesson’. In 1923, contrary to League rules, the French and the Belgium’s invaded the Ruhr – Germany’s most important industrial zone. Within Europe, France was seen as a senior League member – like Britain – and the anti-German feeling that was felt throughout Europe allowed both France and Belgium to break their own rules as were introduced by the League.

Here were two League members clearly breaking League rules and nothing was done about it. For the League to enforce its will, it needed the support of its major backers in Europe, Britain and France. Yet France was one of the invaders and Britain was a major supporter of her. To other nations, it seemed that if you wanted to break League rules, you could. Few countries criticised what France and Belgium did. But the example they set for others in future years was obvious. The League clearly failed on this occasion, primarily because it was seen to be involved in breaking its own rules. Italy and Albania (1923)

The border between Italy and Albania was far from clear and the Treaty of Versailles had never really addressed this issue. It was a constant source of irritation between both nations. In 1923, a mixed nationality survey team was sent out to settle the issue. Whilst travelling to the disputed area, the Italian section of the survey team, became separated from the main party. The five Italians were shot by gunmen who had been in hiding. Italy accused Greece of planning the whole incident and demanded payment of a large fine. Greece refused to pay up.

In response, the Italians sent its navy to the Greek island of Corfu and bombarded the coastline. Greece appealed to the League for help but Italy, lead by Benito Mussolini, persuaded the League via the Conference of Ambassadors, to fine Greece 50 million lire. To follow up this success, Mussolini invited the Yugoslavian government to discuss ownership of Fiume. The Treaty of Versailles had given Fiume to Yugoslavia but with the evidence of a bombarded Corfu, the Yugoslavs handed over the port to Italy with little argument 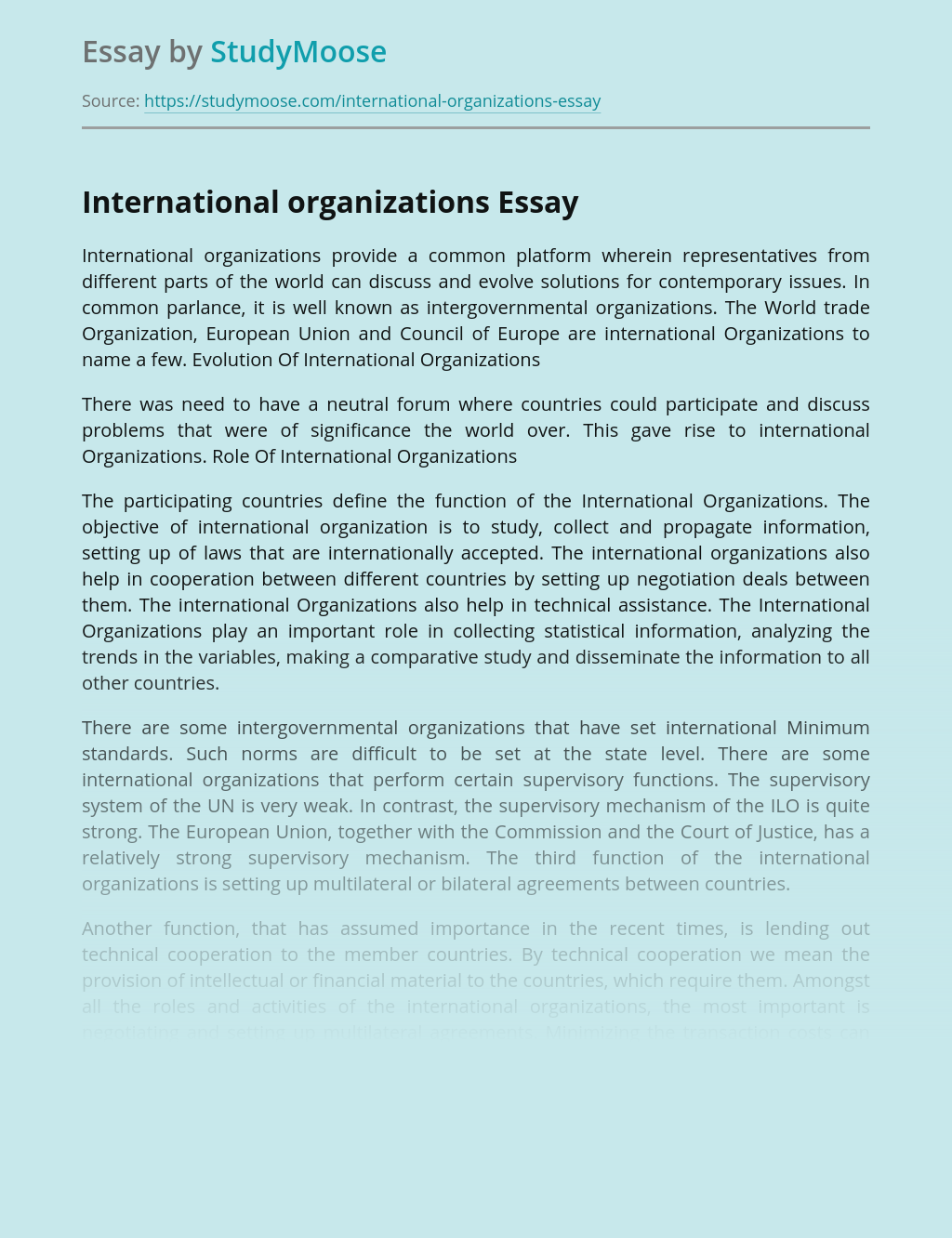