Due to global financial issues in the recent months, consumer confidence is low in the more developed markets such as Japan, the US and Europe (AFP, 2012). Therefore developing markets, such as the Australian market, are looking towards emerging markets where the markets have remained dynamic and rich in growth opportunities. This is because emerging markets “have reached a minimum level of GDP and are in the growth phase of the development cycle” (Pearson Education, 2012), however due to this growth phase these markets are still vulnerable to both internal and external forces.

Don't use plagiarized sources.
Get Your Custom Essay on International Marketing Research Challenges Just from $13,9/Page

With many companies world-wide seeking global growth opportunities, it has never been more important for international marketing research to be conducted in order to fully understand the consumers of these markets (Greenland, 2011). This growth of emerging markets has presented a number of challenges for international marketing researchers including differences in research costs and also environmental differences such as differences in culture and even difficulties in communication and technology.

Conducting research in a different country, especially one that is classified as an emerging market, can create many issues for international market researchers.

For example, Greenland (2011) talked about how the expense of conducting research in emerging markets, such as Africa, is usually much higher than when compared to projects conducted in developed countries. Even though some of these issues may be catered for at the planning stage, many of these issues are unpredictable and can occur at any stage throughout the research project, creating a high chance of the project going over budget. Many factors including travel costs, currency fluctuation and availability of technology can affect the price of market research. However due to the fact that creative research approaches are needed in emerging markets, these higher prices may not be able to be overcome without a lot of research and understanding of the cultural and economic norms of the emerging market country (Craig and Douglas 2005).

As well as culture and economics being a factor in the high cost variations associated with research on emerging markets, the fact that infrastructure and technology is significantly limited also creating many issues to market researchers. This is because limited technology significantly limits the number of options the international market researchers have access to in order to conduct their research. No or limited technology means that most market research will need to be conducted face-to-face. Having to conduct research face-to-face in emerging markets can introduce extra expenses in the form of travel and extra staff when compared to virtual interactions such as online surveys. This is because in many of these emerging markets, for example Africa, “poor road networks, lack of direct flights, and the vast distances involved” (Greenland 2011) make it extremely difficult to reach these rural areas.

As well as being time consuming, this is also a costly process with both transportation and accommodation needed to be taken into account. With these face-to-face interactions comes the problem of being able to communicate with participants who are likely to speak a different language. On suggestion to overcoming this problem is to train local people within the emerging market to conduct the research on behalf of the international market researchers. However, this approach is only a viable option if there are no time constraints due to the fact that it is likely to take a lot of time to train these new people and make them understand what the researcher is trying to find out. International market research can cost a lot more than when conducting research in a developed market, however businesses that are wanting to invest in emerging markets must plan for these extra costs if they want their new venture to succeed.

Every country has their own distinct cultural rules which can cause great confusion and problems when trying to conduct market research in a country that differs so greatly to your own country. For example, in Middle Eastern societies where women have very different roles to those women living in more western societies. This is why “the marketing research process should be modified so that it does not conflict with the cultural values” (Malhotra 2010) of the country in question. In countries such as the Middle East, women are more likely to experience lower education and literacy rates than their western society counterparts. For this reason and many others, face-to-face interviewing seems to be the most viable option for conducting marketing research in these countries (Greenland, 2011). However, even with face-to-face interviews this illiteracy can lead to the respondents not able to formulate their own opinions and all information gained could be biased or non-existent (Malhotra 2010).

Furthermore, the cultural differences in these countries can extend further than just lower education rates, with many other factors affecting the way research must be conducted in these emerging countries to be effective. For example, many Arab cultures prohibit their women to have contact with non-family males, which can cause problems with allowing male researchers to conduct face-to-face interviews (Greenland 2011). A solution to this problem could be training female researchers to conduct the research when female interviewees are needed.

However as well as this being possibly dangerous and deadly to the female, in many developing countries females are the bottom class and are seen to only do household duties, therefore a job would be against cultural beliefs. The extent of the products currently available in the emerging markets is another cultural issue that researchers must face when wanting to introduce a product. Malhotra (2010) suggests researchers need to look at the public’s attitude towards advertising, the government’s control of the media and the behaviour of consumers when conducting research. All of the previous factors change within different cultures which furthers heightens the need for specific research methods and ideas for different emerging markets.

Communication challenges in emerging markets not only relate to language barriers but also differences in technology and cultures. Market researchers may find it very difficult to communicate the more complex ideas of their business to research participants in emerging markets where the language barrier is high. There has been a lot of research been into trying to find a way to overcome this problem. Greenland (2009), looked into using visual cues, such as photographs, to aid the research participants in obtaining a greater understanding of what the researcher was trying to convey. Craig and Douglas (2001), suggest the idea of videotaping people and analysing the behaviour observed to try and identify consumer buying habits. This however can pose many issues from whether it is legal or ethical to tape people without their knowledge and even whether cultural differences change what we would think a particular behaviour conveys.

Greenland (2009), also talks about the language barrier when it comes to translating information from English to Swahili in the form of a questionnaire. The Swahili version of the questionnaire was notably longer than that of the English version which impacts the time taken to conduct the research. While Malhotra (2010) talks about translation from English to German and how the particular meaning of questions were altered when translated, which confused the final results. This is a problem that the researchers tried and failed to overcome at the time of the research being conducted. Also tying into communication issues is the challenge of conducting research without the technology that developed markets rely so heavily on.

According to Malhotra (2010) the lives of everyday citizens, particularly those in rural areas, of countries such as India, South Korea and many Latin American countries, are yet to be impacted by advances in science and technology.” This, therefore, has an impact on how information is collected and stored and can also have an impact on the type of information a market researcher can collect. These non-existent advances in science and technology not only eliminate internet surveys or discussions but in many countries also eliminate the ability to conduct telephone interviews, with researchers unable to find complete telephone directories if the households have access to the telephone at all (Malhotra 2010). With the amount of challenges facing researchers regarding technology, it is often much more efficient to conduct face-to-face interviews.

“With the accelerating pace of market globalisation” (Craig and Douglas 2005), emerging markets are gradually becoming of greater interest to larger
businesses all around the world. To efficiently sell products in these emerging markets a lot of research needs to be done to fully understand the consumers in these emerging markets in order to effectively market and sell their product. There are many factors that make emerging markets different to sell products in when compared to developed markets including, political differences and even variations in currency. This is why it is so important to understand how to efficiently conduct research in these countries prior to selling goods.

However, there are many challenges that face researchers in these emerging markets, including the different costs of research, cultural differences and communication difficulties. These challenges can cause the research to take a lot longer and cost a lot more money than researchers would be used to. However, much research is being done to come up with solutions to combat these challenges which will hopefully make it increasingly easier for businesses to invest in emerging markets in the future. 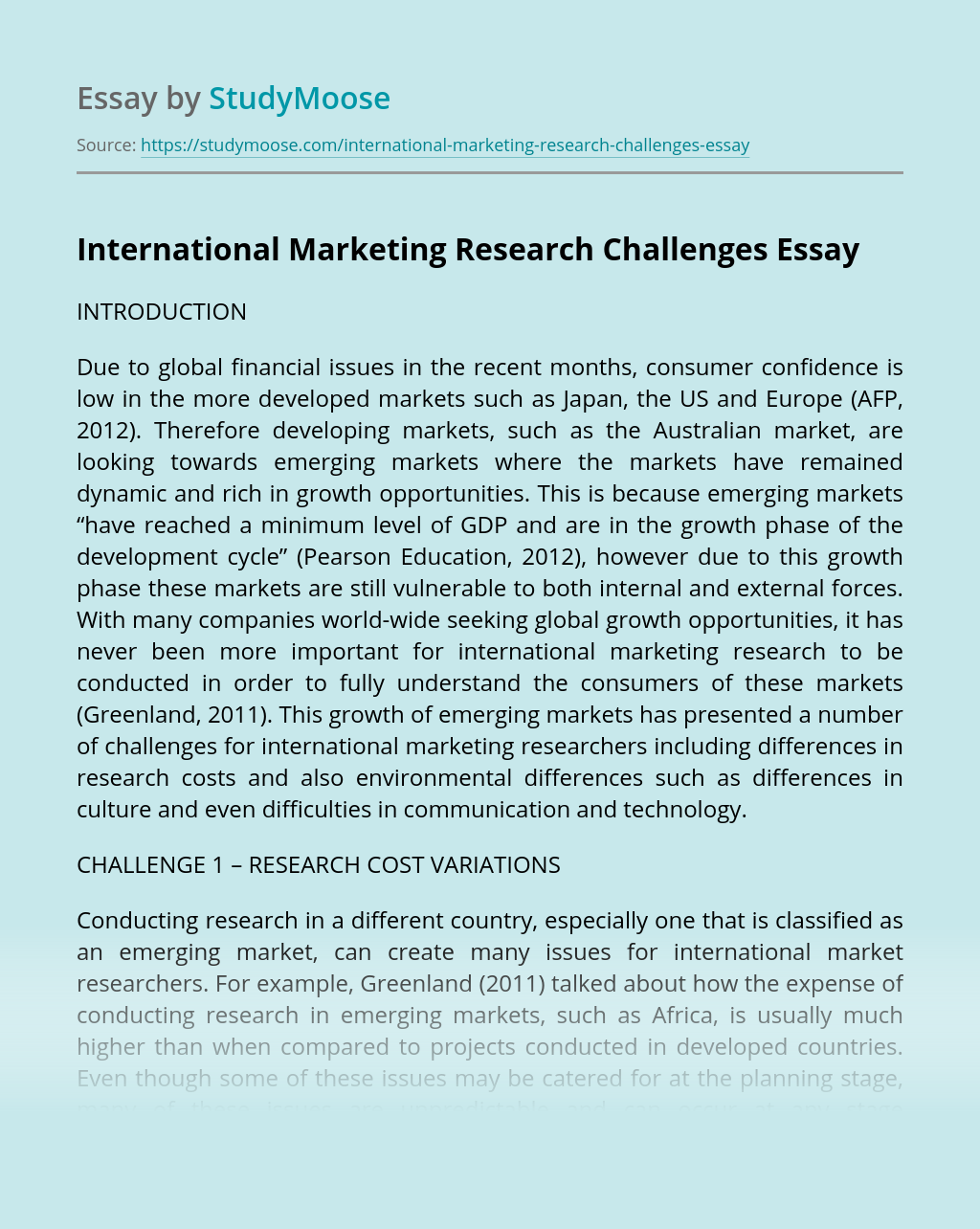 All of our vintage clothing is handpicked with care for its style, wearability, and quality. Each item is unique, and comes with an individual history specific to the piece, giving it a personality beyond what modern clothing could dream of recreating.” The types of products that they commercialize are specialty items. They pride themselves in...

A successful marketing is the ability of a company to execute plans for conception, launch, pricing, promotion, and distribution of a product or service to satisfy both; the target customers’ needs as well as organization’s goals. Thus, managing the market of a product requires significant decision making with regards to identifying the target market, assessing...

Posted by Petra at 1:43 PM No comments: Wednesday, January 9, 2008 9. Pricing Price is the amount of money a buyer has to sacrifice in order to get what he/she wants. Pampers’ tends to make their products available to wide range of customers, so their price must also be affordable, reasonable and relatively low....

Best Buy in the Superstore Industry

Best Buy is one of the world’s largest multinational consumer electronics retailers with stores in Canada, China, United States and Mexico. Richard M. Schulze and Gary Smoliak founded Best Buy in 1966, but it was established as a company in 1983. The company’s stores offer video products, audio products, musical instruments, mobile electronics, home &...