The author of this paper argues several reasons why the insanity plea should be changed or either eliminated. The reasons are considered and supported by evidence. The conclusion states that insanity should be altered or eliminated for the safety and well being of society.

Insanity Defense: Why Should It Be Abolished Or Altered

The insanity defense asserts that the criminal defendant is not guilty by reason of insanity. This theory should be abolished or altered. The proposal behind the defense is people who are insane cannot have the knowledge required to perform a criminal act because they either do not know that act is wrong or cannot control their actions even when they understand the act is wrong, but this theory is controversial because insanity is difficult to define, and the circumstances in which insanity can be used to excuse criminal responsibility are difficult to define.

Don't use plagiarized sources. Get your custom essay on
“ Insanity Defense and Criminal Justice System ”
Get custom paper
NEW! smart matching with writer

The theory of the insanity defense has been around since ancient Greece and Rome.

The theory was put in to use by Edward II. Under the English common law, a person was declared insane if their mental capacity was no more than a so-called “wild beast”. The first insanity trials began in 1724, those who were insane and under the age of 14 were found not guilty in the court of law. (Wiki 2011) This eventually led to any criminal or defendant being able to use the plea to excuse the act that had been committed. Though the act was in place it wasn’t upheld in court and wasn’t problem at the time.

In 1986 (Ford v. Wainwright) the US Supreme court upheld the common law that the insane cannot be executed. It also stated that a person under the death penalty is to be given a competency evaluation and a hearing in court on his or her chances to be executed. In Wainwright v. Greenfield the prosecutor can argue that a person’s silence during the reading’s of their Miranda rights is evidence of insanity. (Wiki 2011) The court gives jurisdiction for insanity in different rules or a combination of them.

The “M’Nagthen rule” is where the defendant either did not understand what he or she did or failed to distinguish right from wrong, because the disease of the mind. The “Irresistible Impulse” test as a result of mental disease, defendant was unable to control his impulses, which led to the crime committed. The “Durham Rule” regardless of any diagnosis, defendant’s mental defect resulted in the criminal act. Finally the “Model Penal Code” due to the diagnosed mentally ill defendant either failed to understand the crime of his or her acts or was unable to act within the confines of the law. (Lally 1997)) The defense declares that a criminal defendant should not be guilty because the defendant is insane. Whens someone commits a crime in today’s society he or she may use mental illness as a defense, know as insanity plea or insanity defense (Dubsinki 1986).

What the insanity defense does is try to give the criminal a so-called fair trial. Even if the crime committed is very extreme and seems to be unruly. The problem arises where do we draw the line for these criminals. What principle is a person considered insane and how is the tested? Insanity defense has been a problem in recent years, and that all criminals have some sort of mental illness. The crime itself no matter how extreme questions the fact if it demonstrates insanity. It has been a major ordeal in our legal system today. If the criminals are considered insane and out of touch with reality, the justice system agrees to pass the trial and the criminals are entered into a mental hospital. (Carpenter 2011) Criminals are then found not guilty by reason of insanity.

For instance, the problem with insanity defense is legal analysts examine each client or criminal from a legal angle, also conversing to different doctors as well as specialists. Each client has to undergo tests. They do not actually come up with scientific prove from the brain to say the person is either mentally ill or not. (Khan 2014) This is the hardest part of the insanity defense, determining whether or not that person is mentally insane or acting like it. How can a person who kills twelve people including women and children be allowed to live in mental hospital while the victim’s families suffer from the loss of their loved ones. Forensic psychiatrist Jonas Rappeport saw such pleas during his quarter century as chief medical officer of Baltimore’s Circuit Court said, “When you’ve got no better defense, that’s the way to go.”(White 2011)

The fact is sometimes these criminals are using the insanity defense to avoid the death penalty and continuing to live life in prison or mental hospitals, and under some circumstances are released from the mental hospitals affirming the patients have been cured (Khan 2014). Any defendant can use the defense. Lorena Bobbitt argued she was temporarily insane when she severed her husband’s penis with a kitchen knife four years ago. She was released after three months of psychiatric evaluation. (Carpenter 2011) Crimes happen everyday, some crimes are inexcusable and those who commit them should be punished. The punishment should fit the crime if we do something that is equally as extreme as take a life from another person, we should not be allowed to defend ourselves by insanity. Murder should go charged which is why the insanity plea should be altered or erased. It allows the criminals to go unpunished for their crime.

There are however many criminals who do have some type of mental illness, but still are not eligible for the insanity plea. As shown in a recent survey of prison populations there are higher rates of mental illness and substance abuse among inmates than the general population. (Lally1997) The determining of insanity is very difficult and can inaccurate. If the person is clinically insane what principles do we use to penalize the individual for the crimes they committed? If he or she does not know right from wrong and if the person is out of touch with reality, under what circumstances is the plea suitable for the crime committed? An example would be if shoplifter was charged for his or her crime and uses the insanity plea as a defense saying they weren’t in touch with reality, we would give that person a reduced sentence. If the person confirms to be insane they need to receive help, if we decided to put that person into a prison it would not help them what so ever.

The insanity plea is a very controversial topic many people think it should be erased others think it should be altered. The difficulty of changing the plea is because of the determining if one is sane of not and under what right to do we have to choose the faith of another person. Resolution Accordingly resolution is the insanity plea should be erased or abolished because it’s a threat to the American people. Considering a large number of Americans feel the insanity plea should be erased or even altered to protect people’s own safety. (Dubsinki 1986) Using the insanity plea in a murder case and getting away with disproves the American people. Imagine the reaction people would feel if a murderer who just recently left the mental institution after pleading mentally insane were walking shoulder to shoulder to them. Insanity should not be used as a so-called excuse to avoid the punishment of the crime someone has committed. They should be punished for their actions they choose to do and neither the justice or court system should have a say in that.

Even though the difficulty to prove sanity is questionable, the person should go through a broader series of tests and have evidence compelling towards insanity. (Harris 2013) If this person is sent to a mental hospital and then is considered cured or not a threat, he or she free to go which is wrong and corrupt. We should have firm standard for judging whether a person is mentally ill or not. Conclusion Thus, the plea should be altered or even erased in some circumstances. Even though some of crimes committed would result in a death penalty for those who murder and kill for no reason. If that person is insane, the punishments should fit the crime they have committed. If they are unaware of what they were doing and the result is being found not guilty, who is to say that they will not commit another crime again. Murder should be punished with death in my opinion and the crime should fit the punishment and there should be no alibi in the court system. If we let these people continue to use this excuse eventually our jails and mental will be full and the government will be spending even more money. (Harris 2013) Taking these so called mentally insane people off the streets will give America a safer conscious. 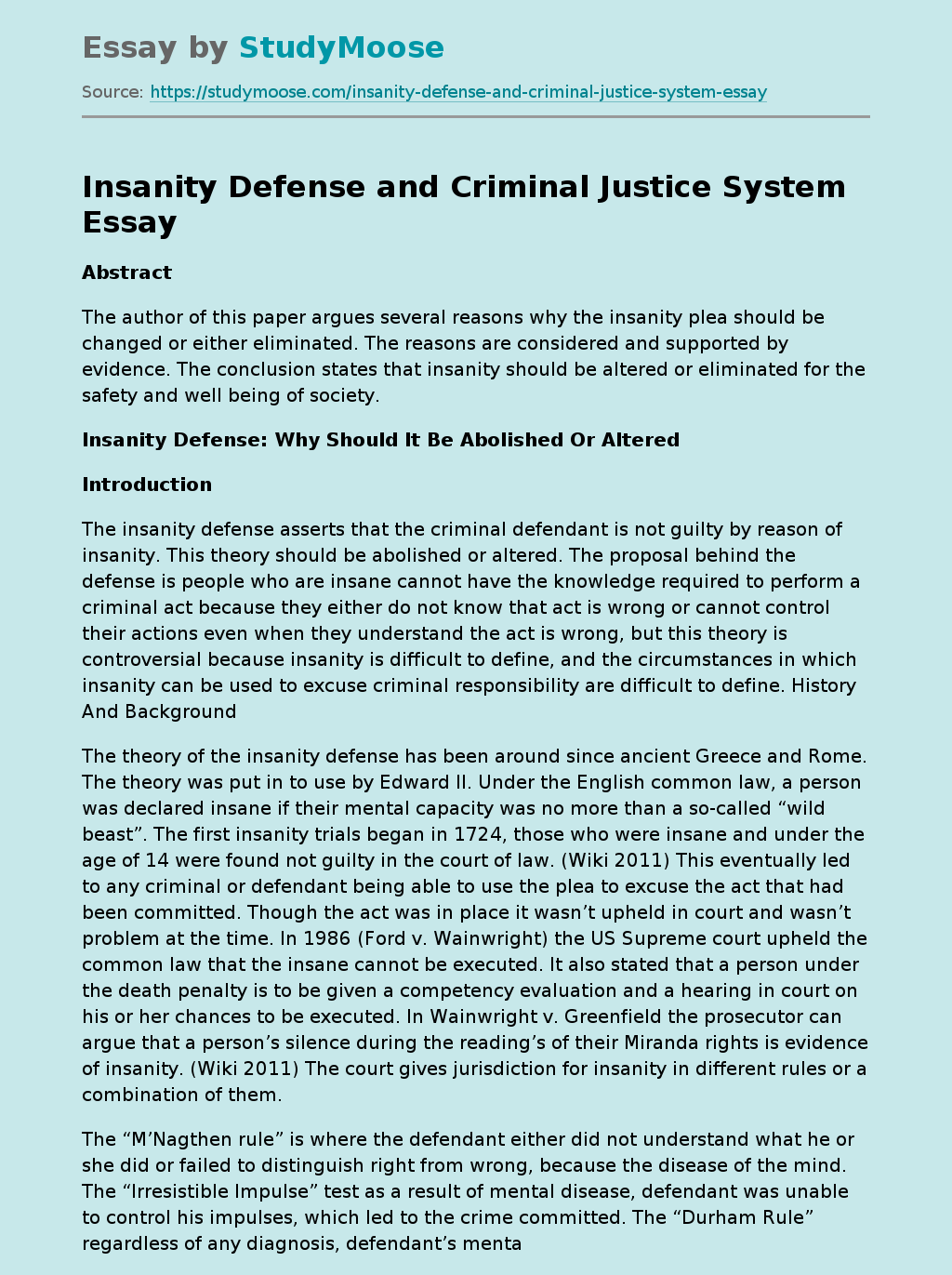