Traumatic Brain Injury’s are an injury that we are still finding out new information on. The extent of this in sports is also on a significantly more extreme level. The question I’m investigating and informing the audience of is whether or not the NFL taken appropriate measures in concussion prevention and rehabilitation? B) Tie this in with my own personal experience of having two concussions and the emotional and physical effects it had on me. My dad’s hockey career was also cut short because of experiencing several concussions.

Don’t waste time
Get a verified writer to help you with Informative Speech Outline about Traumatic Brain Injurys
Hire verified writer
$35.80 for a 2-page paper

C) Wrap up introduction by talking about my subtopics. These include the health effects of concussions, the NFL’s actions, and moving forward in the future. (new equipment technology, NFL’s intentions, etc.)

What is a concussion

A concussion is a type of traumatic brain injury caused by contact to the head. 1) According to the Centers for Disease Control and Prevention, “signs and symptoms of a concussion may loss of conscious-ness, confusion, memory loss, dizziness, double or blurry vision, balance issues, sensitivity to light or sound, and nausea or vomiting.

”(Boriboon). Symptoms include nausea, vomiting, change to athlete’s behavior, etc. Because of the serious condition of the brain after a concussion, players are expected to sit out 2-4 weeks.

Conclude first point by talking about how because of the expectations and scale these pro athletes are playing on, they tend to mislead medical experts. 2) In the article, “Concussions in Sports and Recreation,” author Terry Adirim notes that, “ neuropsychological testing is the gold standard in the assessment of concussions.

This is because there is evidence that underlying brain functions continue to be impaired even after reported clinical symptoms of concussion are gone”(Adirim).

Recently, Roger Goodell implemented a new medical committee to advise him on the issue of traumatic brain injuries. i) Replaced the former Mild Traumatic Brain Injury Committee, which was active from 1994 to 2009.

After concussions were being seen more and more, “rule changes on and off the field, and the appointment of a new scientific advisory committee to study the neurological issues associated with concussion in NFL athletes,”(Ellenbogen). Go in to detail regarding former and current player’s who have been or are negatively affected by concussions Situation with NFLPA

Possible case study of a player who experienced a specific condition from excessive head trauma In 2013 alone, there were 228 diagnosed concussions during preseason and regular-season practices and games combined iii) “coaches typically are not familiar with the symptoms and treatment of concussions, and players have trouble diagnosing themselves, or are not likely to disclose their injury because they want to remain in the game,”(Heiner).

There is no denying that concussions are a serious problem in the world of sports today Player’s who devote their life to something that is supposed to be their passions shouldn’t have to endure the detrimental effects of concussions later in their life Depression, CTE, and other ailments can be prevented if we take more accurate measure

Is it possible to create better types of testing

– If we change equipment for the better of the player’s, will this help stop the NFLPA 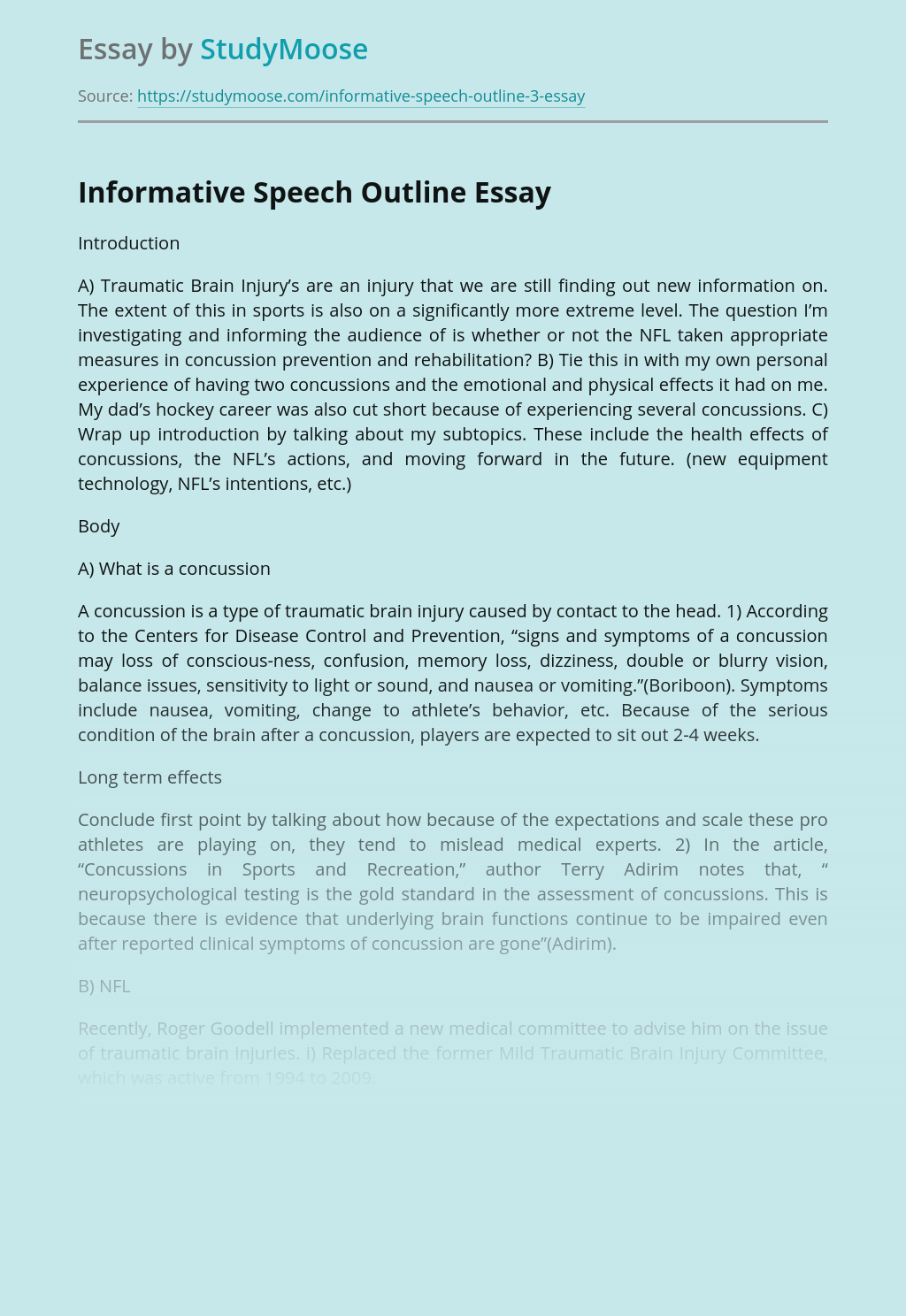