Influence of tv on children

Television has come a long way since its invention in the 1900’s. People around the world have got to witness many historical events such as, the first man to walk on the moon, to even the inauguration of our first African American president. Although there were many great moments in history viewed on television, not many of the programs offered on stations are valuable.

There have been many arguments on whether or not television has been a good influence on our children.

I feel there are many advantages and disadvantages to television. But sometimes, television may not always be a good source of information for children and their development. There is also no excuse to use television to babysit children. Children become affected from over exposure to television. I feel television is fine if viewed in moderation. There are many alternative activities we can do instead of sitting on our couch and watching pointless shows.

The usefulness of television has been a very controversial argument over the years.

I feel there are a lot of both positive and negative properties about television. The positive side of television, there are many educational programs that help inform us. The news channel is an excellent example of such. News broadcasts can tell us about disasters that may have occurred, weather forecasts, and current events. Children may also watch shows that help with learning basics. Another pro is the integration of culture into our society.

However, with the pros come many negative effects. Spending too much time watching television, consumes the precious time that can be spent in productive and healthy activities like exercise or reading.

It also uses up the time that you can spend interacting with your family and friend. Children today watch television for long periods. The dependence to television deprives them of their time to play. It would be better for children to involve themselves in physical activities during the evenings instead of sitting inactively.

Physical activities can help them live a healthier life. In addition, watching television is damaging to vision. Researchers claim that attention deficit disorders in children result from watching television for long periods. Television leads to developmental disorders, damaging the capability of the brain which is in control of language skills. Children who watch more television show difficulties in paying attention or concentrating. Television is one of the effective media used to promote all kinds of products. Unsupervised television watching in children can lead to early exposure to things they may not understand.

Television advertisements may influence the children to use wrong methods. Eye catching advertisements and film stories deeply impact young minds. They associate their life to television shows and films. Studies in psychology have shown that watching intense emotions on television leaves a long-lasting impact on one’s mind. Horror scenes, ghosts, unpleasant scenes that are shown on television have a negative effect on the minds of people watching them. Violence, killing, massacre and physical abuse that is shown on television impacts the thoughts and emotions of the viewers.

Research shows about 25% of parents use television to occupy their children; or in other words babysit them. Some 70% of the 1,000 mothers & fathers were polled as part of the national year of communication survey say they do not feel guilty about allowing their children to watch TV. And 42% think it is a great way for children to learn.

On the bbc.com website, a survey was taken and many parents say bring conversations on about what they’ve learned from watching the shows on television. In actuality only 15% of families start conversations based on tv. There is certainly no excuse to have your child sit in front of the television screen. Children can do a whole list of activities that are better worth the time such as reading or going outside and getting active.

Influence of tv on children. (2016, May 25). Retrieved from https://studymoose.com/influence-of-tv-on-children-essay 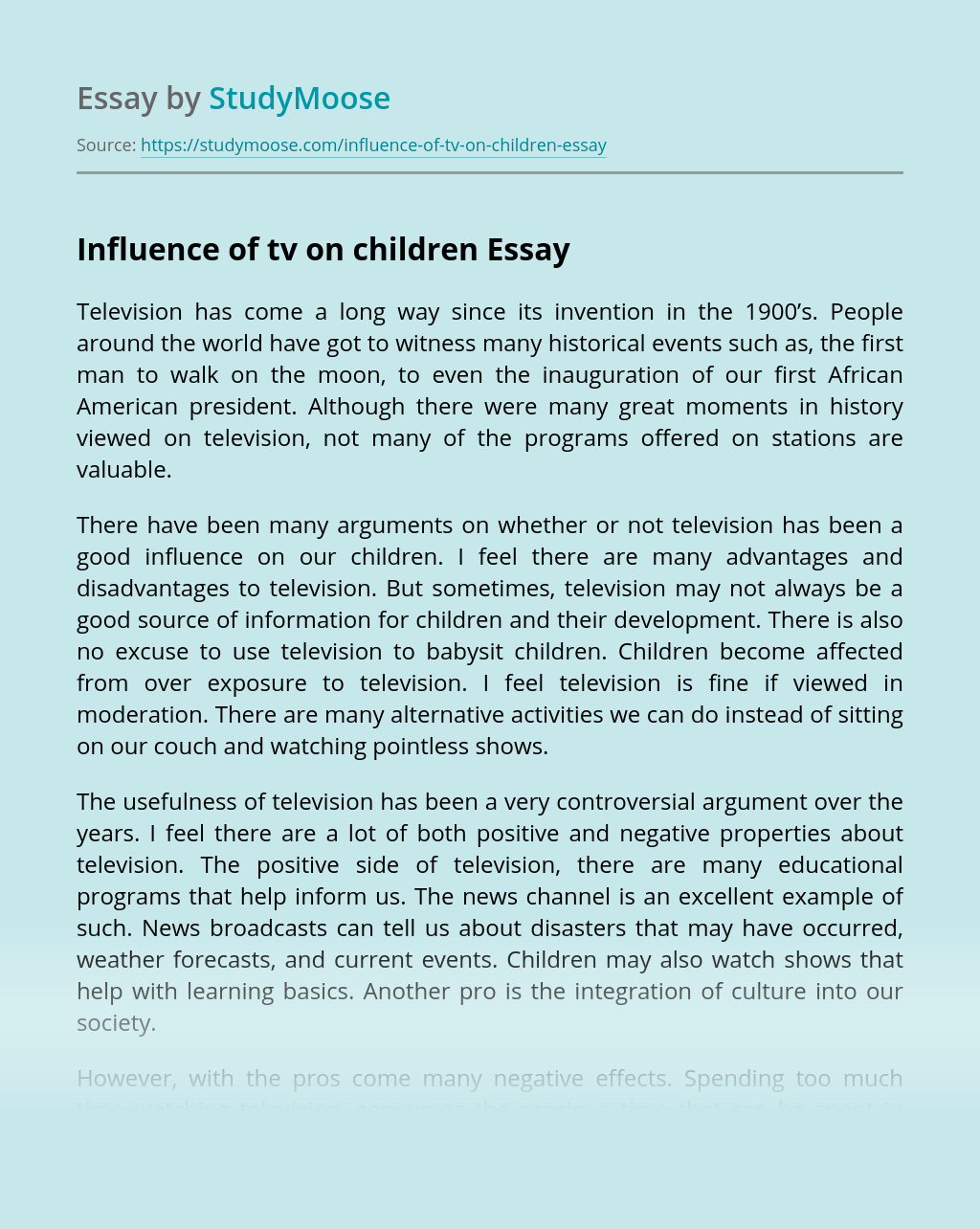 TV has bad effects on children: Agree or disagree

From technological perspectives, we are in a splendid age. Nowadays, TV as an item of technology has actually turned to an integral part of our lives. This concern that “TELEVISION has bad impacts on kids “is a controversial one and can be approached from different angles due to its complexity; however in my opinion, a...

Effects of television on children

Every day for the few decades; children have been subjected to the harmful messages of advertisers on television. There is some discussion in the literary works over the years at which adolescent children can distinguish television broadcasts from programs, and when they can conjure up and want what they lay their eyes on and when...

Get Essay
Impact of Television Violence on Children

The television has become such an integral part of homes in the modern world that it is hard to imagine life without television. It provides entertainment to people of all ages especially children. Children love to watch TV and prefer to stay “glued” to the TV screen all day, rather than playing outside. In the...

Watching Tv Has an Adverse Effect on Children

My knowledgeable friend has submitted that TV viewing is harmful for children. I submit that it is all the more important to impress upon the impressionable minds of the children basic teachings which would help them a lot. TV viewing does harm the eyesight but only in a wrong way. I disagree as, if TV...

How Did Mass Media Influence Adolescents and Children in the Last Ten Years?

TV Media’s Influence on Child Development http://www. cleancutmedia. com/tv-shows/tv-medias-influence-on-child-development “Several risks to pediatric health are literally staring children in the face. It’s time to call the doctor. ” Want to share this old, but great article from the Harvard Medical Alumni Bulletin. Very interesting points about how media cuts into many issues such as obesity,...

The Positive Impacts of Reality Tv

Outline Thesis Statement: Reality TV has an internal conflict about the positive impact, and while most people think that there are no positive things, there are some positive things gained from reality TV without feeling it, such as Jersey Shore, Teen Mom, The Biggest Loser, and American Idol. I. Introduction (the history of reality TV)....

Television has become the most common and most widespread source of knowledge, entertainment and information of the present world. And satellite television has added a new dimension to our world of recreation. Now with the help of satellite TV we can have access to the television of different countries and distant broadcasting centres like America’s...