Most of the human behaviors are a result of influence. This impact can either come from the environment or from the people we leave with. The people we come across with are likely to influence our behavior, beliefs and even feelings. This impact will lead to the development of our day to day activities. Most of the activities we encounter every day in our life play a great part in how we are going to behave.

The study on social impact is very wide. Psychologists have done a lot of research to understand it and as a result many theories have been developed which explain social influences. CITATION Noa06 l 1033 (Friedkin, 2006)Compliance (This is the first form)

There are several forms which have been identified to influence social behavior. Compliance is one of these forms. Simply put, compliance means to accept. Individuals may change their behavior only because someone has told them to do so, and therefore, they comply with his or her request.

Compliance involves taking action to change a person’s behavior and feeling towards someone or something, therefore, it is known as an active form of social impact. This form of power is initiated by a person intentionally. Sometimes compliance is a result of internal social influence which entails inner faith of an individual. A person can decide to change from within, without any external force .Compliance as a result of the change in personal faith is not the primary aim of compliance.

Conformity (The second one)

The other form of social influence is conformity. It happens when individuals adjust their attitude behavior and sense to conform to a group’s norms or culture. People in most cases would like to be identified with a certain group of people; hence they can do anything to change the behavior, including their sense and faith towards something or someone so that they can be the same with the other members of the group. It takes the observation of the other members of the group for one to change his or her behavior and act like them. Some behaviors one has to learn slowly. In addition one can also be taught by the members of the group. For example, an individual who would like to be identified with a group of professionals would only require observing how they behave. He or she may observe their dressing code and finally he or she would behave like them. One cannot be identified with a set group if he or she does not conform to their standards and behaviors (Pratkanis, 2011).

A person can conform to a set group either internally by having the same faith and feeling or externally by acting as the people of that group. The members of a certain group can actively influence a person to act like them, and that kind of social impact is known as an active influence. Passive impact occurs where the members of the group does not directly influence one to act like them. Most of the youth are affected by this kind of social impact. Many young people today would like to be an associated with a particular group of people which they share common beliefs, behavior and sense therefore, they would try very much to have the same behavior which will make them conform to the standards and culture of that group. The same case happens to many organizations, when an individual is recruited to join the institution; he or she has to change his or her behavior feeling and approach so that he or she can be identified with the organization.

Conformity has three sources. The first one occurs when a person sees or senses someone else act in a certain way. First it should come to your understanding that a set group of people are doing a certain activity, then you will judge whether it the right thing for you or not .After a thorough consideration you will be able to make an informed decision on whether to conform to their behavior or not ( Zanna, 2014). These can take different forms; one can see what is being done whether good or bad, you can also hear from the media or a member of the group can also inform you of their undertaking. The second one is when people understand that what a particular group is doing is informational; hence it is the best way to do things. People all over the world are in search of information and knowledge, therefore if they realize what they been looking for is being done by a certain group of people, then they will have no option other than to join them. The information gotten from that group should be beneficial to the person conforming to their faith and belief; it should add value to the existing knowledge. Finally, people conform because of the concern for the social outcome of their behavior. People would like to know the final result of certain behavior depicted by a group of people. Most researchers would engage themselves with a particular group of people with a solemn aim of knowing the end result of that kind of behavior (Homans, 1966).

Obedience is another form of social influence. Unlike the other forms; obedience involves the change of action as a result of direct command from the person in authority. These kinds of power always involve command on the targeted audience to act in a certain manner. Influence by command if often found in the institution where strict adherence to law and regulation is required. A good example is the military unit; the officers have to follow strict command from the authority. Obedience as a form of social power is one sided; it does not require the consent of the other party. The authority will use power vested in them to command actions, this instructions must be followed. The end result would be change of behavior; it will also affect their sense of ideas as well as their faith. Obedience has been applicable in most institutions and also in the government, with the aim of changing the behavior of the targeted audience. The application of this form of social power can have positive or negative impact on the person being impacted (Tedeschi, 1972).

Persuasion is another form of social impact. It involves an active attempt by a person to change the behavior, attitude feeling or belief of another person through some form of communication. The focus of this kind of impact is the internal change of perception, belief or sense of an individual. The power of a person to influence another is very important so that persuasion can take effect. The political leaders use this tactic to make people to have faith in them. The language use is very instrumental for changing the behavior of people; the person must have good knowledge of the language use. Also the understanding of the targeted audience is important for you to be able to change their behavior CITATION Car08 l 1033 (Hetzel, 2008).

How psychologists have studied them (Add more here)

Many scholars have tried to define social influence, which has led to numerous definitions of the same subject. We can define social influence as a sum total of all the things that might alter the behavior, action feeling or thought of a person. This aspect has been extensively studied by psychologist and sociologist. Its application has also been studied carefully to establish how it affects the society.Professor Herbert ,one of the scholars of psychology defined social influence as a situation where an individual identify, comply and internalize to behave in a certain manner different from the way they had behaved in the past. The view of the scholars about social impact is that individuals may identify with influential person from a distance or the might have a close relation. They also believe that compliance can happen at the surface but deep in that person he might not be convinced .There are a lot of things which we can talk about concerning social impact; the bottom line is that it is aimed at changing the behavior of people. The reason why a person’s view of ideas can be influence has not been clearly know by scholars. 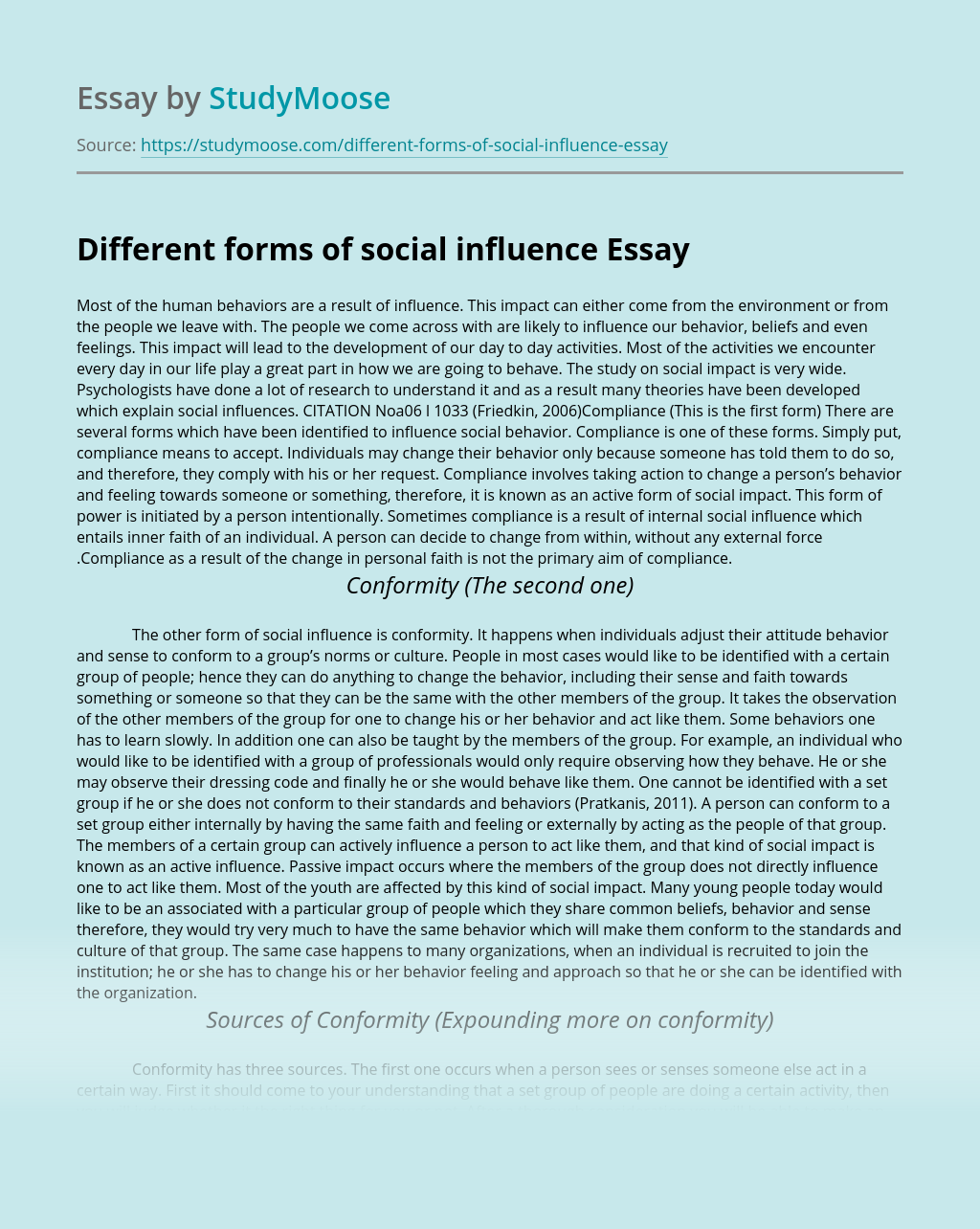 Rate this post Peer influence on a child can either be bad or good depending upon various situations. It is important that peer influences boost socialization and learning that will have a positive effect on the child. Children learn from others and imitate what they see and hear, so peer influences play an essential role...

Rate this post Everyone is uniquely shaped, and should not be compared with others. Expressing ourselves can differentiate from other expressions since we are unique in each and every way. Some similarities may exist, but not necessarily every aspect of what we tend to express. As defined in the textbook, “emotional expression is the most...

Get Essay
Factors That Influence Communication

Rate this post There are different ways that the environment can affect communication. For example: Noise – A noisy environment can mean road works, loud music, and transportation. Setting – Pictures, signs, decorations and poor lighting can distract people which makes them lose focus. Time – Meeting at the wrong time and phone calls at...

Rate this post Organizations are complex systems which rely on people, structures and technology to achieve their goals and objectives. They are created to serve the needs of the societies or communities in which they operate and are influenced by both their internal environment (culture) and their external environment. As defined by Robins “an organization...

Assess the contribution of Social Action Theory to sociology

Rate this post Social Action Theorists, or Interactionists are also known as micro sociologists, this is because instead of looking at the bigger picture in society, and how the large structures and institutions such as the education and judiciary systems affect individuals, which is what Marxists and Functionalists (macro sociologists) look at, Social Action Theorists...

Rate this post How many people can live without using any technological device? Very few right. We live in a generation where one finds it very difficult to live without a phone. We are so dependent on technology like it’s a drug. Over the recent decade, information sharing, communication, converting sight to sales, among many...

The art of understanding human behavior fascinated me when I

Rate this post The art of understanding human behavior fascinated me when I began reading a thrilling book called “The social Animals” authored by David Brooks. The book opened my eyes to a myriad of fresh insights about the realm of emotions, human intuitions, genetic predispositions, personality traits and social norms. I began to sense,...