Influence of Progressive Era on Society in USA

The Progressive Era was a period of time when mass groups of people pushed for major changes. Some became successful while others weren’t. Many different approaches were used to try and change four areas. They were protecting social welfare, promoting moral improvement, creating economic reform, and fostering efficiency. The Progressives believed in four major principles which are demonstrated in the actions they took to support them.

One objective the Progressives enforced was protecting social welfare, which they established in many ways.

Don't use plagiarized sources. Get your custom essay on
“ Influence of Progressive Era on Society in USA ”
Get custom paper
NEW! smart matching with writer

These groups of people wanted desperately to fix urban problems. With this mind set, the YMCA (Young Men’s Christian Association) was founded. This association opened libraries, sponsored classes, and built swimming pools/handball courts, for the good of the city. A major supporter and leader of this reform was Jane Addams. She created settlement houses in many cities; they were homes for women to stay until they were back on their feet again. Jane Addams’ actions inspired many other women to become involved.

With all that occurred during the Progressive Era, work sometimes seemed pointless, but thanks to numerous peoples’ hard work and dedication, many of the organizations still exist today.

One significant goal the Progressives struggled to change was promoting morals. The Women’s Christian Temperance Union became very involved during this reform. Frequently they would visit inmates and mental patients to see how they were managing during their time of hardships. WCTU believed that all women should have the right to vote. Suffrage for women was a heavily debated issue during the Progressive Era.

One main leader of the moral improvement reform was Susan B. Anthony. She had no limits; she would try every law available related to voting in any way. She became a woman of power and an idol for others.

Another notable debate at this time was prohibition, the banning of alcohol. Reformers believed that with alcohol out of the picture, the poor could live a better life and many of the poor were immigrants. Therefore the immigrants would have an easier life when first coming to America. Alcohol was a part of the culture, so the push to ban alcohol would be a difficult task for the leaders. Promoting moral improvement became an important but laborious goal for the Progressives.

Another goal for the Progressives was creating economic reform. They fought for many changes in business. Some started to question “Laissez Faire”; in turn other people began to move towards socialism. The Sherman Antitrust Act was also brought back into play. The government used its power to bust monopolies, therefore helping small businesses. Also, Muckrakers wrote newspaper articles that criticized big businesses and social wrongs. Upton Sinclair, author of The Jungle, tried to show the naïve public and government the truth about the meat companies. His book involved detailed and gory findings that when published aroused many people.

Sinclair’s book influenced Theodore Roosevelt, the current President of the United States at the time, to send officials in to the meat factories to investigate what was really going on. Upon this investigation, new laws were made and enforced. The Pure Food and Drug Act dictated that companies must print on the labels what was “truthfully” in the product. Efforts made to change the economy were time consuming and troublesome but yielded good results.

The last principle the Progressives believe in was fostering efficiency. The reformers wanted things to be orderly and organized. To them, this was being efficient, by not wasting energy. The idea of scientific management included many practices including applying science to businesses and making things simple would produce more money. This was the main concept of scientific management. Henry Ford was a supporter of scientific management. Mr. Ford developed the assembly line, which increased production by a large amount. With the introduction of the assembly line, work for the employee became demanding and repetitive. The worker stood in one place, where they were presented with work from a conveyor belt. Ford then brought the five-dollar workday into play attracting many employees to come work for him. Fostering efficiency was a well-met goal for the Progressives.

In summary, it can be stated that the Progressive Era brought many changes into our generation. Even though quite a few of these actions happened in the 1900’s they still affect us today in 2001. The Pure Food and Drug Act, the YMCA, and others still exist today with few revisions. The Progressives had four main principles which they believed in and even today they continue to influence us.

Influence of Progressive Era on Society in USA. (2021, Jun 18). Retrieved from https://studymoose.com/influence-of-progressive-era-on-society-in-usa-essay 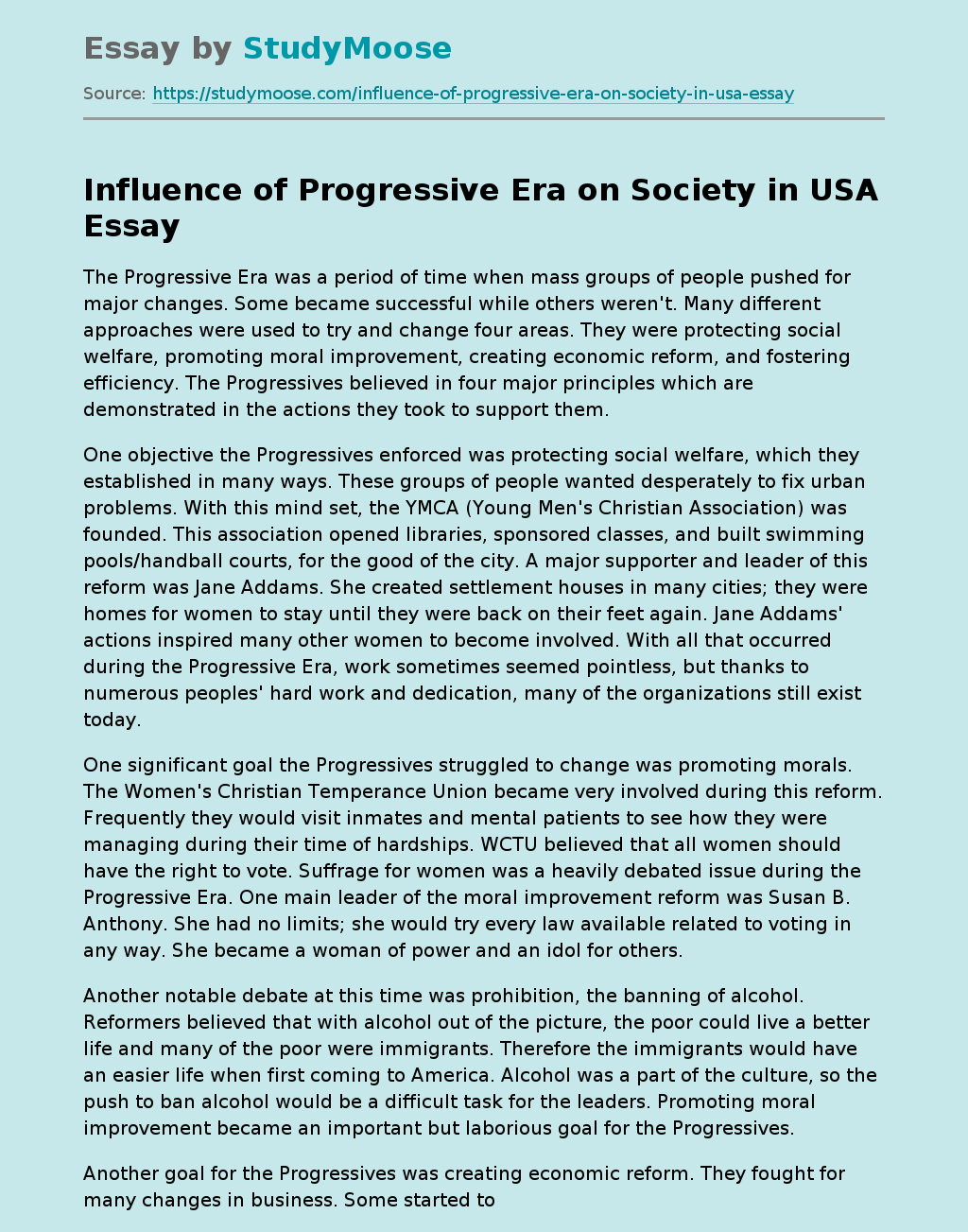