Individual rights are those rights we have that allow us to exercise our freedoms granted by the Bill of Rights. The Bill of Rights, originally drafted in 1789 by James Madison, came into effect in 1791 (Wikipedia 2007). The enumeration in the Constitution, of certain rights, shall not construe to deny or disparage others retained by the people. These rights became the first ten amendments of the U.S. Constitution. These rights have been the cornerstone of American Law then and still are today without these rights, this country would not have become the democracy it is today, and a land where individuals would be subject to a stricter, more dictatorial government.

Don't use plagiarized sources. Get your custom essay on
“ Individual Rights and Public Order ”
Get custom paper
NEW! smart matching with writer

Individual rights are those rights that allow us to live our day-to-day lives without fear of government intervention, unless of course we break the law or violate one of these rights. Among them are freedom of speech, free exercise of religion, protecting citizens from unreasonable search and seizure, cruel and unusual punishment, and self-incrimination.

Imagining our lives today without these rights is impossible. As America expands its role around the globe, we see that other countries do not share our belief in individual rights. We see how lucky we are to afford such rights and freedoms. In fact, many countries have rulers who are still keeping their citizens oppressed and underprivileged. They believe that this action keeps their citizens in line because they do not have the individual right to protest or speak out. Knowing the harm that is incurred by this, I am reminded of a quote from John Adams.

John Adams said, “When people talk of the freedom of writing, speaking, or thinking, I cannot choose but laugh. No such thing ever existed. No such thing now exists; but I hope it will exist, but it must be hundreds of years after you and I shall write and speak no more” (1818). He was not far off. Our Constitution has incurred many changes over the last 200 years. Because our society demanded the changes, our government had to add more individual rights to the Constitution. Some of those rights are the Thirteenth Amendment of 1868 which abolished slavery, The Fifteenth Amendment of 1870 which allows all men regardless of color the right to vote, and the Nineteenth Amendment of 1920 which gave women the right to vote (2007). These are only three examples of the fifteen amendments to the Constitution added since the constitution ratified in September of 1791. Because individual rights have become so important to the citizenry of this country, we have demanded that our government add to and protect those rights. But, what if these rights did not exist?

Unbelievably there was opposition to the original Bill of Rights. Alexander Hamilton, a Federalist, argued that the Bill of Rights would only allow for the protection of those rights and not for the other rights in the Constitution. He said, “The enumeration in the Constitution, of certain rights, shall not be construed to deny or disparage others retained by the people (cira 1791). This argument was in protest of the Ninth Amendment which addresses the rights of the people that are not specifically described in the Constitution (Wikipedia 2007).

There are those who believe that the Patriot Act of 2001 has stripped American citizens of their rights guaranteed to them by the Constitution. The Patriot Act gives the information gathering community the right to spy on the citizens of this country or anyone here legally or illegally, in the name of national security. On March 7, 2007, an internal report showed that the FBI had used this power illegally and inappropriately. Not only is this wrong, but it does not change the fact that the rights we have enjoyed since 1791 have been pushed aside.

In researching this paper, I was pushed to find a way to argue that there is a “con” side to individual rights. I feel that there is no reasonable argument for not having these rights. When our ancestors set out to allow us the rights, they denied them under English Government. Thomas Jefferson wrote to James Madison “Half a loaf is better than no bread. If we cannot secure all our rights, let us secure what we can” (Wikipedia 2007).

In today’s society, many topics arise when we talk about the disadvantages of public order. Things can become very frustrating and confusing to those who are not paying close enough attention to their immediate surroundings. For instance, you are a life long cigarette smoker, which is your individual right. One day you head down to your local restaurant for your Friday evening supper and see no smoking signs posted everywhere, inside and out. How can this be? You keep asking yourself. Is it not my right as an American to smoke if I want to? If, I choose to die of lung cancer that will be the choice I have to live with. Maybe I can understand not smoking in the restaurant itself but outside too. Many places are now banning smoking in and around business buildings as well. Unfortunately, more and more Americans are asking themselves these questions everyday. Although I am no longer a smoker, I find these prohibitions troubling.

While in school and growing up we are taught our first amendment right to freedom of speech yet society has become a place were you must be careful of what you say and who you say it around for fear of reprimand. For instance, two people are having a personal conversation about a topic that could be perceived as inappropriate. Next, a third party that is not involved, overhears the conversation and decides to call the police. Then, the two men are searched and detained for questioning. Public order has an effect on all of us in some minor way. Recently I was in a Subway restaurant waiting in line to place my order. When I got to the counter, I saw a sign that read no cell phone use while ordering food. Does this mean I am restricted from viewing the food while taking an order over the phone? Little forms of public order, as I like to call them, keep appearing more day by day. The outcome from these so-called public orders can range from little or none, to extreme given the situation.

People can become loud and obnoxious when told what they can and cannot do. It is probable the person working at the restaurant most likely had nothing to do with the prohibition. But, they are likely to be verbally and physically threatened. The community may also revolt to these public orders in the forms of picket lines and rioting. Webster’s dictionary defines order as “A condition where there is a logical arrangement or disposition of things; sequence or succession; method; an instruction for a person to follow; a request for certain objects; to command; to demand”.(1992). We need to ask ourselves, do we want to live in a world where everything is dictated to us? If that is the case then we might has well give up a democracy and become a solely communist country, relying on someone to tell us our every waking move.

Let us discuss the pros of public order crime. Public order crime can be consensual or non-consensual. One example of consensual crime is prostitution, where two adults voluntarily consent to an arrangement and this activity takes place in private. Many people feel this should be legal, because it is consensual. I do not feel that this should decriminalize others, because it has not been proven that many other crimes are usually found in conjunction with prostitution such as theft assault and drug use. (McWilliams, 2005) Some examples of non-consensual crimes are; driving while intoxicated disorderly conduct, public drunkenness, and cigarette smoking.

Some people think the illegal blood alcohol level for driving while intoxicated is too low. I think that if it were higher, there would be more victims killed by this crime. While on the subject of public drunkenness, what kind of an example does that set for our kids to see that it is ok to consume alcohol in excess? Then there is cigarette smoking. How right is it for the non-smokers especially our kids to be subject to second hand smoke? For this, I believe the ban on indoor smoking should remain in effect. (McWilliams, 2005)

I have discussed the pros and cons of individual rights, and that they enable us to exercise our freedoms granted by the Constitution. I have also discussed public order, describing crimes and deviant acts that are contrary to our shared customs, social values, and norms. It is clear to me there is no black and white answer that will satisfy every person’s desires and beliefs. There is however, a definite need for public order in our society. I think the best answer to this debate is that there has to be a balance between Individual rights and public order. I believe this balance is a necessary cornerstone of our democracy and American way of life.

PATTERNS AND TRENDS IN PUBLIC ORDER CRIME Ain’t nobody’s business but your own. (Peter McWilliams). 2005 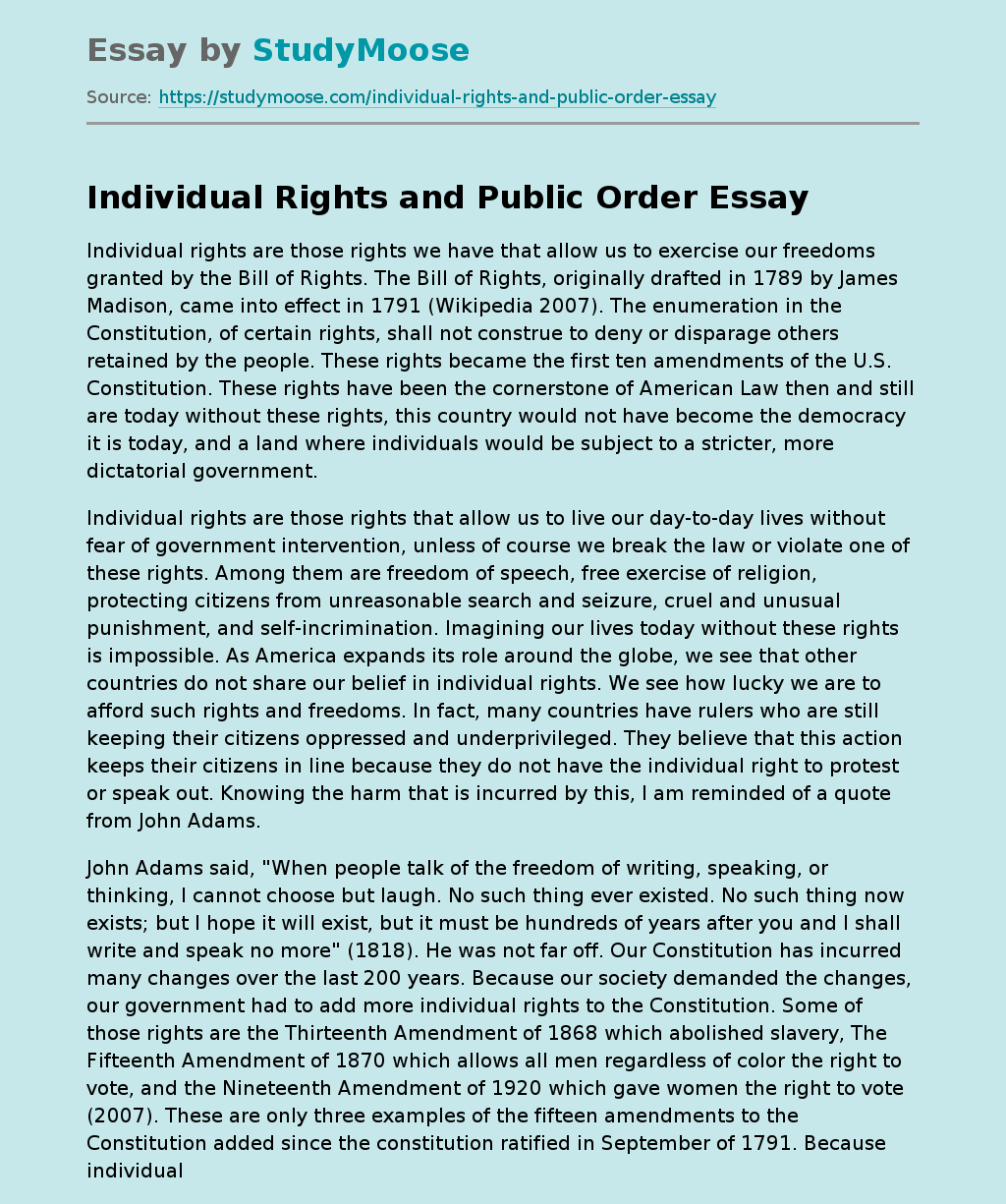