In today's time there has been a rising debate on whether

In today’s time, there has been a rising debate on whether self-affirmation is actually beneficial for our wellbeing or not. Wellbeing is not just the absence of disease or illness. It is a complex combination of a person’s physical, mental, emotional and social health factors (Webster, 2019) With that being said self-affirmation is also an important part to a healthy wellbeing. Self-affirmation is the act of affirming one’s own worthiness and value as an individual for beneficial effect such as increasing one’s confidence or raising self-esteem (Katherine Nelson, Fuller, Choi and Lyubomirsky, 2018).

Don't use plagiarized sources. Get your custom essay on
“ In today’s time there has been a rising debate on whether ”
Get custom paper
NEW! smart matching with writer

This can be something as small as standing in front of the mirror and telling your self that you’re amazing or knowing that you are going to conquer the day no matter what. Social psychological self-affirmation research suggests that value affirmations often boost adaptive functioning and improves wellbeing. Nevertheless, there is also evidence suggesting that self-affirmation does in fact have implications to the health of an individual.

In this essay, I will explain the association between self-affirmation and how it benefits our wellbeing through evidence attained from experimental studies and reviewing the results.

Self-affirmation is deeply rooted by perception that people are motivated to view themselves as morally adequate and stable individuals. This is most commonly caused by societal standards placed on us our day to day lives human are confronted with many challenges and events that influence and construct our self- affirmation. Individuals are influenced by what the media has shown us and want to fit within society’s norms by fitting a certain image.

It is also thought that self-affirmation does in fact also determine if we contribute to societal standards or not. To evidently prove this accurate, a study was conducted in 2008 by Dr Kenneth E. Freedland, A professor of psychiatry and psychology. In the study Dr Freedland shows that self-affirmation in fact had a positive result on components that boost our health behaviour change and message acceptance (Epton & Tracy, 2019). The study consisted of 93 Females who were spontaneously chosen to take part in a self-affirmation or control task prior to receiving a message about health promoting effects of fruit and vegetables. A 7-day daily record was conducted on each individual on their intake of fruit and vegetables alongside with self-efficiency and measures were obligated right after the exposure to the message. The study revealed that the self-affirmed applicants ate larger proportions of fruit and vegetables, an estimate of 5.5 portions throughout the week, in contrast to the control group. This effect was a result of response-efficiency. The habits of the group of self-affirmed women can be explained due to presence of a higher level of self-affirmation within themselves which didn’t allow their health to be effected as they did not care whether they gained weight or if their psychical appearance changed. providing a clear understanding to how self-affirmation manipulation can increase a health-promoting behaviour, in this case the consumption of fruit and vegetable (Epton & Tracy, 2019). Overall it was clearly evident from the experiment that Self-affirmation can effectively influence health-promoting behaviours. However thus study established a limitation in terms of not having a wider participant cycler and only focusing on the female gender as their development, and ideologies and thoughts are much more different in comparison to men. Therefore, for future reference their must be more in-depth research with a larger gender span is needed for a more accurate information. Moving on the next section will discuss self-affirmation and its contribution to hedonic and Eudaimonia wellbeing.

Studies have theorised that wellbeing involves both hedonic and eudaimonic aspects in response to self-affirmation (Howell, 2016). Eudaimonic well being encompasses our core values according tour try self which includes psychological requirements, the meaning and purpose of life and engagement in flow experiences. Hedonic wellbeing is comprised by the experience of frequent positive emotions and infrequent negative ones (Ryan & Deci, 2001).

Self-affirmation has been considered to be beneficial to our wellbeing throughout this essay, however a high level of self-affirmation can also risk your well being too. Studies have shown that Self-affirmation reduces defensive responses to threatening health information, but little is known about the cognitive processes instigated by self-affirmation (Roskos-Ewoldsen, 2009). People are often provoked with threatening information influencing them they live an unhealthy lifestyle that poses a serious risk to their health. Although people should respond by adopting healthy behaviours or stop risky behaviours, people often persevere with their unhealthy behaviours (Sherman & Cohen, 2006). An experimental study by David R. Roskos-Ewoldsen tested the theory of whether or not self-affirmation increased the responsiveness to threatening health information at an implicit level. In his experiment of 84 students from The Ohio State University, they engaged two groups of coffee drinkers, high relevance which were coffee drinkers and low relevance which was non-coffee drinkers. The applicants were given information about health in relation to caffeine consumption and it’s association to to severe health problems. Before reading the information, the members were asked to reveal a value that was personally important or not. All members then completed an honest decision task to evaluate the convenience of threat-related cognitions and defined their ideas of message quality and and how they would take action and precautions. Consequently, the results revealed that Among high-relevance participants, self-affirmation increased the accessibility of threat-related cognitions, increased perceptions of message quality, and promoted adaptive behavioural intentions (Roskos-Ewoldsen,2009). This suggests that self-affirmation does in fact slightly decrease the responsiveness to threatening health information amongst individuals. this can often be because people are always confronted with life threatening health information and that something they do might lead to a unhealthy life and harm them. Although in these situations people should respond with assertiveness to the situation by avoiding those unhealth risky behaviours. however, this is not always the case as people with a higher self-affirmation are sometimes more content with their lives and happy the way they are they just disregard such information which they think is just useless as them seem happy and pleased with themselves. The information presented to the individual is them processed into a bias fashion. Although this method of processing health threatening information is likely to stop harm in the future, it can also prevent people from protecting their own personal health. Overall this study had a fairly solid argument with solid evidence however the limitation for this experiment would be that well being is something that is thought to be a bigger picture. Although the results did show that self-affirmation did affect the way people looked at health warning this experiment was extremely minor as something like being a high caffeine drinker isn’t usually thought to be that big of an issue. Furthermore, if the participants were hit with a more realistic life-threatening risk such as cancer, the participants may have then acted assertive and taken immediate action the issue. Hence more research must be conducted to produce a strong opposing argument again self-affirmation and its benefit to wellbeing.

In conclusion, it was clearly evident that self-affirmation does positively affect the hedonic and eudaimonic wellbeing and components that boost our health behaviour change and message acceptance. From both studies conducted there was an increase in the wellbeing of those individuals who were included in the self-affirmation condition revealing that self-affirmation was actually benefiting their wellbeing. Although Self-affirmation reduces defensive responses to threatening health information, this was only a minor risk which many would not even consider life threatening currently. Thus, future implications are necessary in order to develop further research and interventions to produce accurate evidence against self-affirmation and its benefit to our wellbeing.

In today's time there has been a rising debate on whether. (2019, Dec 19). Retrieved from https://studymoose.com/in-today-s-time-there-has-been-a-rising-debate-on-whether-example-essay 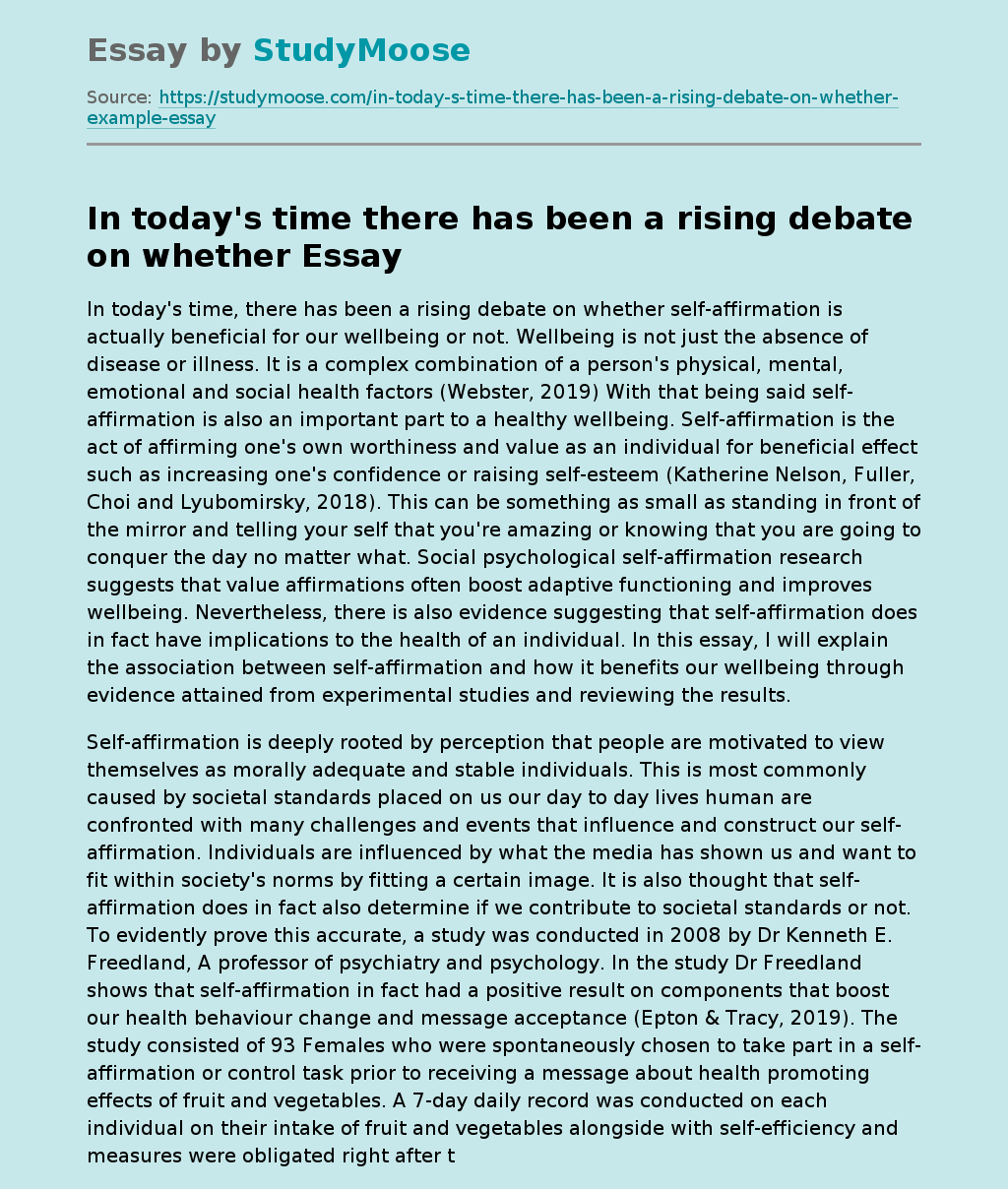