In One Hundred Years of Solitude Analysis

In One Hundred Years of Solitude, the main plotline revolves around the fictional Colombian town named Macondo, and its main inhabitants, the Buendia family. Though it is obvious to the reader that each member to the Buendia is crucially important to the novel, each visitor to Macondo also carries his or her own importance. Three of such visitors are Melquiades, Rebeca, and Moscote. None of them are purebred Buendias, yet each of them has a profound effect on the town of Macondo, the Buendia family, and the novel, itself.

Don't use plagiarized sources. Get your custom essay on
“ In One Hundred Years of Solitude Analysis ”
Get custom paper
NEW! smart matching with writer

The first group of visitors to come to Macondo is the group of gypsies. These gypsies, specifically their leader, Melquiades, influence the Buendia family is a variety of ways, right from chapter one. One prominent example of how Melquiades had an effect on the town is the fact that he is the one who introduced Jose Arcadio Buendia to the concept of alchemy, and of science in general. From then on, Jose Arcadio Buendia spends most of his time in his laboratory trying to do things such as making gold and proving the existence of God.

It is Jose Arcadio Buendia’s self consumption in these types of scientific works that eventually lead to his ultimate solitude and eventual demise. Therefore, one can conclude that if it weren’t for Melquiades’s arrival in Macondo, the ideas of alchemy and news of other technological advances would never have gotten there. If these ideas never got to Macondo, Jose Arcadio Buendia would not have become obsessed with them, and if he hadn’t developed these types of obsessions, he would not have been brought to his ultimate demise.

Another way that Melquiades affects the town of Macondo is that he is essentially the cause of the town’s ultimate demise, just as he is of Jose Arcadio Buendia’s ultimate demise. Before he dies, Melquiades leaves behind a variety of texts in his old laboratory. Some of these texts take the form of prophesies, and some take the form of a detailed history of the Buendia family. At the end of the novel, Aureliano, a sixth generation Buendia, locks himself up in Melquiades’s old laboratory and engages himself in reading Melquiades’s old texts. He becomes so consumed with theses texts that he takes no notice of the winds coming, which turn out to blow the city of Macondo off the face of the earth. It says, “Macondo was already a fearful whirlwind of dust and rubble being spun about by the wrath of the biblical hurricane when Aureliano skipped eleven pages so as not to lose time with the facts he knew only too well” (416). The argument can be made that perhaps if Aureliano wasn’t so engrossed in Melquiades’s old texts, he would have perhaps tried to escape the sweepings winds, as well as try to preserve some artifacts from the town of Macondo. Therefore, the downfall of Macondo can be traced back to Melquiades, in the form on his texts.

A second visitor who has a foremost affect on the Buendias, and who eventually becomes part of the Buendia family, herself, is Rebeca. Rebeca comes in the form of an orphan girl, who eats earth and whitewash and seems to have a strong attachment to her childish ways. Her arrival plays greatly into the idea of magical realism in the plot, as it causes a plague of insomnia. It says, “Visitacion recognized in those eyes the symptoms of the sickness whose threat had obliged her and her brother to exile themselves forever from an age-old kingdom where they had been prince and princess. It was the insomnia plague” (43). This plays into the idea of magical realism in the plot because insomnia is not a contagious disease, so the idea that there could be plague of it, deals very much with the mystical side of the plot development. Her arrival also affects the Buendias in that their insomnia causes memory loss. In addition to this, her arrival also directly affects Jose Arcadio, who, upon his return falls madly in love with her. This is yet another example of how incest affects the Buendia family. Though they are not technically related, Rebeca is essentially Jose Arcadio’s sister, because she was adopted by the Buendia family, though Jose Arcadio did not know this.

A third visitor who has an intense influence on the Buendias and on the novel is Don Apolinar Moscote. When he first arrives, he issues a decree saying that all houses must be painted blue. One might think of this as a small, insignificant action, and that Moscote is just a visitor to Macondo who is over stepping his boundaries, but it turns out to be way more than that. Because of this one action, Jose Arcadio Buendia drives him out of Macondo, but he returns soon enough, this time with his wife and seven daughters, one of whom being Remedios Moscote. Aureliano soon falls in love with her, and they are arranged to be married.

After their marriage, Remedios proves to be a worthwhile member of the Buendia household. It states, “From that day on the sense of responsibility, the natural grace, the calm control that Remedios would have in the face of adverse circumstances was revealed. It was she who, on her own initiative, put aside the largest piece of wedding cake that she had cut from the wedding cake and took it on a plate with a fork to Jose Arcadio Buendia” (80). In addition to caring for Jose Arcadio Buendia, she also makes an attempt to settle disputes and keep the peace within the household This is an obvious case of how Moscote’s arrival has an effect on the Buendias. His arrival meant that of Remedios as well, who, once becoming an official member of the Buendia family, demonstrates somewhat of a mothering figure, which is just what Buendias needed at that point. Unfortunately, this is a short-lived luxury for the Buendias, as Remedios dies shortly after.

Moscote also affects the inhabitants of Macondo in that he was the one who introduced them, specifically Aureliano, to the concept of war and to the Liberal and Conservative parties. If he had never done this, Macondo may not have ever been exposed to the evils of war, and therefore Aureliano would not have become Colonel and got involved in the war. If Aureliano had not gotten involved in the war, he conceivably would have had no experience to lead him into his solitude. It can be deduced that Aureliano’s sense of solitude was a result of the war from the quote, “As far as I’m concerned, I’ve come to realize only just now that I’m fighting because of pride” (135). It was after Aureliano uttered that quote that he became disbursed in his sense of solace. The myriad of other effects of the war can also be linked to being Moscote’s fault as well, because of the fact that the war, itself, can be linked back to him.

Each and every visitor that comes to Macondo has a distinct purpose. Whether they affect a certain character, the town in general, or the overall plotline of the novel, they are there with a meaning, and their presence cannot go unnoticed. Because the novel does not have one main protagonist, the whole Buendia family acts as protagonists. Therefore, Marquez uses these visitors to act as antagonists throughout the course of the novel. These visitors also serve as the Buendia family’s connection to the outside world.

In One Hundred Years of Solitude Analysis. (2020, Jun 02). Retrieved from http://studymoose.com/in-one-hundred-years-of-solitude-analysis-essay 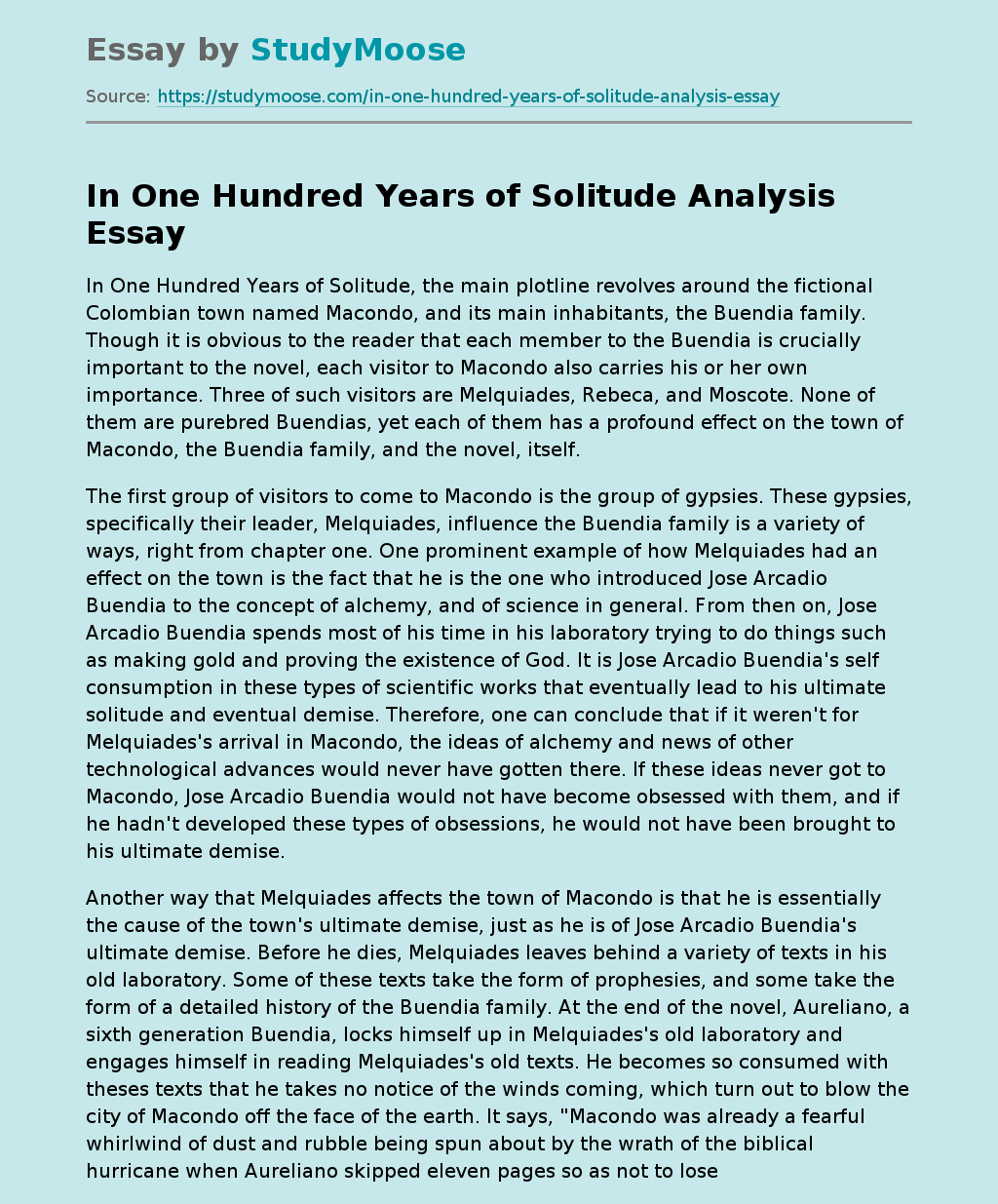