In humans fungal infections range from superficial to deeply

In humans, fungal infections range from superficial to deeply invasive or disseminated and have increased dramtically during part decade. The treatment of mycoses has lagged behind bacterial chemotherapy and fewer anti-fungal substances compared to anti-bacterial substancs are available. Therefore, a search for new and natural plant based anti-fungal drugs is extremely necessary (Portillo et al., 2001).

Pathegenic fungi and dermtophytes have been strongly reported to have the ability to invade keratinized tissues of animals and humans to cause diseases. Due to the increasing development of drug resistance for human pathogens as well as the appearance of undesirable effect of certain antimicrobial agents, there is a need to search new antifungal agent without toxicity and side effect (Akenpelu and Onokoya, 2006).

Don't use plagiarized sources. Get your custom essay on
“ In humans fungal infections range from superficial to deeply ”
Get custom paper
NEW! smart matching with writer

Plant extracts or plant-derived compounds are likely to provide a valuable source of new medicinal agents. Infectious diseases particularly skin and mucosal infections, are common in most of the tribal inhabitants due to lack of sanitation, portable water and awareness of hygienic food habits.

An important group of these skin pathogens are the fungi among which dermatophytes and Candida spp are prominent. Antimicrobial properties of certain Indain medicinal plants were reported based on folklore information, and a few attempts were made on the study of inhibitory activity against certain pathogenic bacteria and fungi (Sankar et al., 2010).

The presence of antimicrobial susbtacnes in thehigher plants I well established and they provided a source of inspiration for novel drug compounds as they have made significant contribution towards human health (Jyothi and Dennis, 2012). According to the report given by World Health Organization, medicinal plants would be the best source to obtain a variety of drugs.

Furthermore, natural products either in their pure compounds formulation or as standardized plant extracts or essential oilds provide a pathway for new plants drugs and his has urged microbiologists for the formulation of new anti-microbial agents and to evaluate the efficacy of it (Rasdi et al., 2010).

Many efforts have been made to discover new antimicrobial compounds from various kinds of sources such as micro-organisms, animals and plants. One of such resources is fold medicines. Systematic screening of them may result in the discovery of novel effective compounds. The spectre of untreatable bacterial infections adds urgency to the search for new infection-fighting strategies (Jamuna et al., 2011). Contrary to the synthetic drugs, anti-microbials of plant origin ar not associated with many side effects and have an enormous therapeutic potential to heal many infectious diseases (Dagmar et al., 2003)

The term inflammation is derived from the Latin word Inflammare, means burn. Any form of injury to the human body can elicit a series of chemical changes in the injured area. Earlier it was believed that inflammation was contemplated as a single disease caused by disturbances of body fluids. According to the modern concept, inflammation is a healthy process resulting from some disturbance or disease. Reports states that inflammation is of three main types namely the first phase, inflammatory exudates develop due to enhanced vascular permeability and leads to local oedema. It is followed by the second phase where, migration of leukocytes and phagocytes from blood to vascular tissues occur. In the third phase tissue degradation are followed by fibrosis (Arya and Arya, 2011).

Inflammation is a tissue reaction to infection, irritation or foreign substances. There are several tissue factors or mechanisms that are known to be involved in the inflammatory reaction such as release of histamine, bradykinin and prostaglandins. In addition to local changes in an inflammatory area, there are often various responses such as rise in temperature and increase in blood leucocytes. There is also an increase in certain plasma proteins termed acute proteins. It is reported that inflammation is considered as a primary physiologic defence mechanism that helps body to protect itself against infection, burn, toxic, chemicals, allergens or other noxious stimuli. An uncontrolled and persistent inflammation may act as an etiologic factor for many of these chronic illnesses. Although it is a defence mechanism the complex events and mediators involved in the inflammatory reaction can easily be induced (Jorge et al., 2004).

Literature states that, due to many side effects of the currently available anti – inflammatory drugs major problem occurs during their clinical uses. Therefore, the development of newer and more potent anti-inflammatory drugs with lesser side effects is necessary (Gedson et al., 2011). Medicinal plants have been a source of wide variety of biologically active compounds for many centuries and used extensively as crude material or as pure compounds for treating various inflammatory conditions. The widespread use for herbal remedies and healthcare preparations as those described in ancient texts such as the Vedas were obtained from commonly used traditional herbs (Arif et al., 2009).

A recent report states that drugs which are in use presently for the management of pain and inflammatory conditions are either narcotics e.g. opioids or non-narcotics e.g. salicylates or corticosteroids e.g. hydrocortisone. All of these drugs posses a well known toxicity and side effects. On the contrary many medicines of plant origin had been used since long time without any adverse effects (For example; Aspirin, Dextromethorphan etc.,). Exploring the healing power of plant is an ancient concept. For centuries people have been trying to alleviate and treat disease with different plant extracts and formulations (Salahdeen et al., 2004).

A review report states that inflammatory diseases include different types of rheumatic disorders such as rheumatic fever, rheumatoid arthiritis, ankylosing spondylitis, polyrhtritis nodosa, systemic lupus erythematosus and asteoarthritis. An array of drugs are available in the market to treat these disorders but are hightly toxic with adverse retention, resulting from prolonged used. Gastrointertinal problems associated with use of anit-inflammatory drugs such as NSAIDs (Non Steroidal Anti Inflammatory Drugs) are still an enduring dilemma of medical world. It is very important that profound research with ethno botanical plants possessing anti-inflammatory and analgesic properties can definitely open up new doors in inflammatory disorders. Purified natural compounds from plants can also serve as template for the synthesis of new generation anti-inflammatory drugs with low toxicity and higher therapeutic value (Boursinos et al., 2009).

Reports states that the mofern allopathic drugs are single active components that target only one specific pathway whereas; herbal medicines work in a way that depends on an orchestral approach. A plant contains a multitude of different molecules that act synergistically on targeted elements of the complex cellular pathway (Durmowicz and Stenmark, 1999).

In humans fungal infections range from superficial to deeply. (2019, Dec 01). Retrieved from http://studymoose.com/in-humans-fungal-infections-range-from-superficial-to-deeply-example-essay 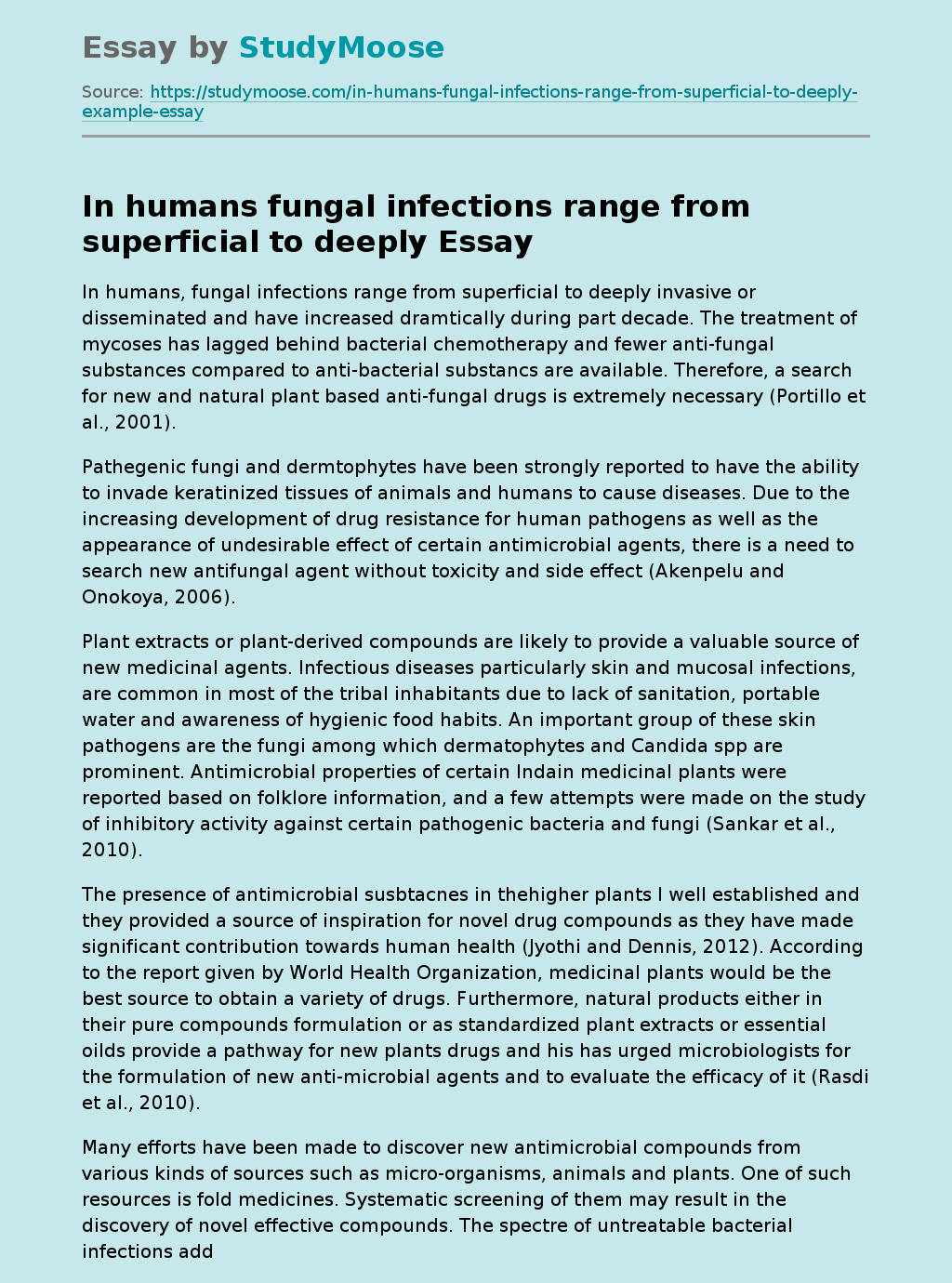