In the story “The Baby Party” by F. Scott Fitzgerald and “Regarding the Problem of Newborn Piglets in Winter” by Chen Rong, both authors try to convey a message of “much ado about nothing.” Characters in both stories focus on an issue or problem that is not important, which ends up bringing them more troubles.

In “Regarding the Problem of Newborn Piglets in Winter,” the problem is formed by Zhang Dingfan, the Secretary. He just dreams up this unreal problem as “a wind blows up outside”; therefore he gives out the order.

Don't use plagiarized sources.
Get Your Custom Essay on “The Baby Party” by F. Scott Fitzgerald Just from $13,9/Page

As his inferiors receive the order, they immediately drop down all their works and convey out the order to make sure everyone is fully informed the problems of the piglets. However, the piglets never have any problem throughout the story.

In the case of the story “The Baby Party,” Edith is too concern on having her child, Ede, being superior. This is shown by her intended late arrival of the baby party and her inappropriate laughter as Ede laughs after hurting the little boy.

This theme of identity also applies to her husband, John Andros. The author mentions this at the beginning of the story, “when John Andros feels old, he finds solace in the thought of life continuing through his child.” The couple focuses too much on their need to have Ede being superior. This is the main cause of their big argument with the Markey’s family, which also result a pointless fight between John Andros and Joe Markey.

These stories are similar, yet they do have some differences. Both authors want to get across the same idea, but use different ways. Chen Rong in “Regarding the Problem of Newborn Piglets in Winter” uses seven different levels of people in different social classes to convey the message out. Those troubles are dramatically created by the redundancy of the communications. F. Scott Fitzgerald, on the other hand, in “The Baby Party” mainly expresses his view through the two families, the Andros and the Markey. The author adds in the “much ado” through the big arguments and the pointless fight.

Although these two stories are constructed in different ways, they both let the readers finish with a sense of agreement that all the things the characters have done or all the troubles they have experienced are meaningless. 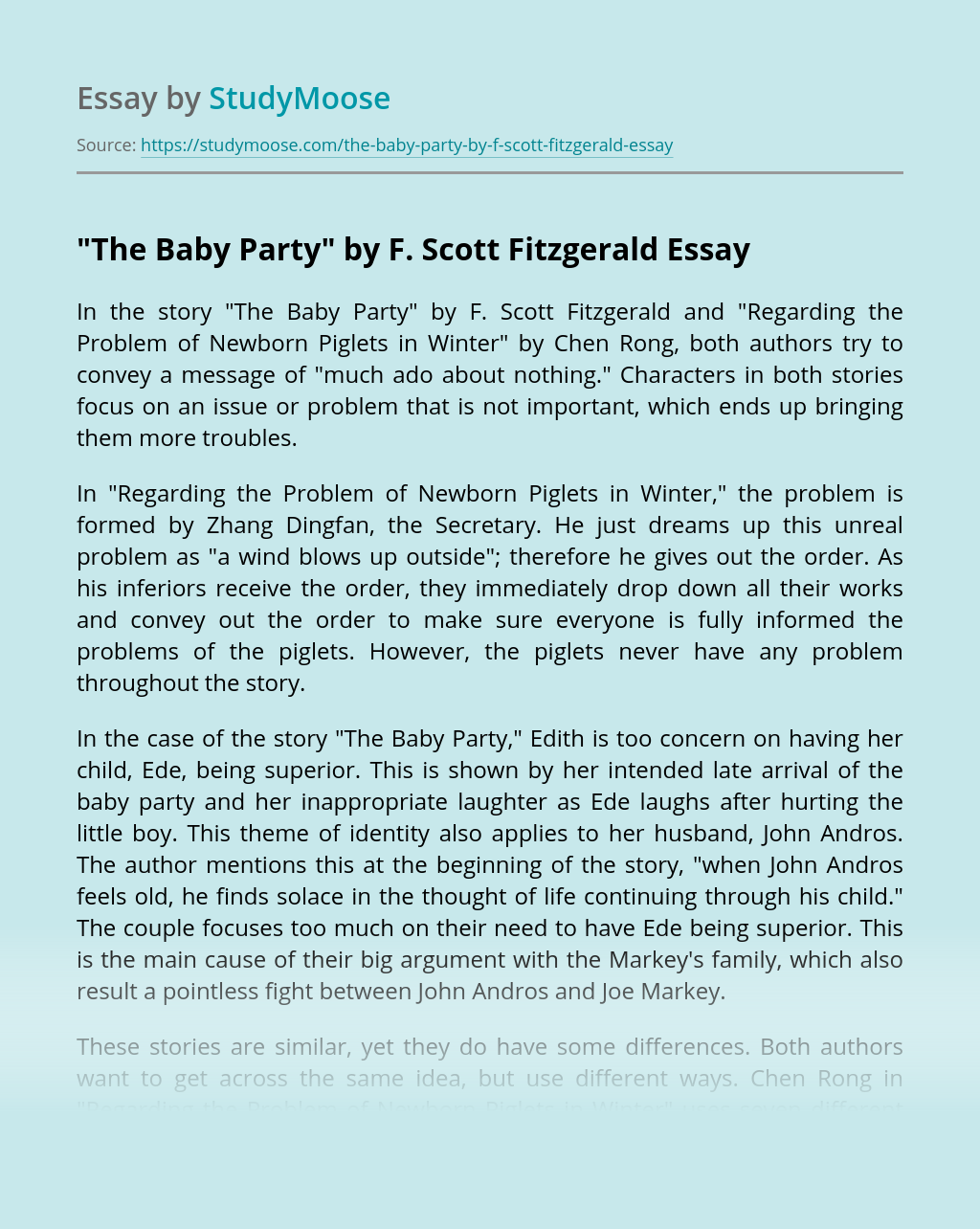 Gone are those days when people sustained in a ‘World of Equipoise and Equanimity.It becomes a matter of unsurmountability to locate an exclusive mortal who remain unexposed to the influence of the pernicious vices exhibited in the apron of society. This piece of work presents about the evil which dominates today’s world and the role... VIEW ESSAY

Koobideh Kabab known as Cholo Kabab is one of the most famous dishes in the Iranian culture. Although many in the West admire Cholo Kabob, they have no idea how it’s prepared and are sometimes shocked when they find out cooking Cholo Kabab is very simple. By understanding the steps needed in order to make... VIEW ESSAY

View sample
Get Essay
An Analysis of Counterfeit Culture in Fashion

Among the social constructs that exist in most cultures and societies, fashion is probably one of the most ambiguous; it can be purposive yet frivolous, essential yet expressive, and functional yet influential.  What started as mere protection from the elements has become a global industry that defines generations and mindsets, producing lifestyles and preferences that... VIEW ESSAY

View sample
Introduction Various studies have shown that there is

Introduction. Various studies have shown that there is correlation between motivation and performance and success of project depends on employees motivation. Management of motivation amongst project staff is a critical role for project managers to ensure success of the project. It is an uphill task to find the right motivated staff within an organization due... VIEW ESSAY

To pursue a career in Child Nursing, it is prominent to have plenty of patience, knowledge, commitment and a resilient mind-set. All of which I believe I fulfil, considering I was an active participant in both the rounders and football team where I pursued the role as captain, enabling my team to become victorious in... VIEW ESSAY