Importance of the Second Amendment

The history of the United States began on July 4, 1776, when the founding fathers rebelled against the tyrannical rule of the British Empire. In doing so, the Founding Fathers would go on to create a society based on freedom and liberty for its citizens. The Constitution is the supreme law of the United States of America, and in this document is the Bill of Rights. The Bill of Rights is essential to the American way of life and how the country has developed throughout its history.

Don't use plagiarized sources. Get your custom essay on
“ Importance of the Second Amendment ”
Get custom paper
NEW! smart matching with writer

The Bill of Rights contains the first ten amendments to the Constitution, which guarantee American citizens civil rights and protections from their government. One Amendment is constantly under attack for a variety of reasons, but many do not understand the importance and significance of said amendment. Gun rights in America are an essential freedom stemming from the founding fathers providing the citizens with the right to defend against a tyrannical government by any means necessary, and they are essential to self-protection and protection of freedoms for citizens.

When the Bill of Rights and Constitution were ratified in 1791, they were intended to protect the individual liberties and civil rights of American citizens. ‘A well regulated Militia, being necessary to the security of a free State, the right of the people to keep and bear Arms, shall not be infringed'(Strasser). This is the exact phrasing of the Second Amendment found in the Bill of Rights of the Constitution of the United States of America. Without these basic freedoms and protections of individual liberties, the founding principles of American values are essentially worthless.

By enacting gun control legislation, individual freedoms that were intended to be protected by the Constitution are nullified. The quote from Ben Franklin “ Any Society that would give up a little liberty to gain a little security will deserve neither and lose both,” (Online) argues strongly for the case that sacrificing individual liberties for safety is a slippery slope. The argument that the government should be allowed to control the power of the citizens through passing laws to ensure safety does not only directly oppose the principle upon which America was founded, but is also unconstitutional (Hills).

Throughout the course of history, citizens have been repeatedly oppressed by governments and if citizens do not have the ability to have a power or check on the government, then they will inevitably be at the will of the government. There are checks in other areas of the government, such as the House and the Senate. The House’s representation in Congress is based on population size, while the Senate’s representation is the same for every state. This was established to allow smaller states to have the same amount of power as the larger states and not have their voices lost by being overpowered the majority population. This bicameral legislation is important to allow checks and balances within the government to ensure the voices of the minority are not squandered by the voices of the majority. When this same principle is applied to the citizens and the government, the intention of the Second Amendment becomes more clear. The Founding Fathers wrote the Bill of Rights to protect the citizens, and without the Second Amendment, the government’s actions can go unchecked by the citizens. Without enabling the American citizens to have the proper checks on the government, the Constitution is essentially being ignored and individual liberties that are protected by the Bill of Rights are practically nullified (Gun).

The ability to defend one’s self is a natural right and gun control makes the assumption that citizens are safer when the only firearms in the nation are in the hands of the government. Human beings have the right to defend themselves and punishing the rights of law-abiding citizens because of the actions of deranged criminals is not only illogical but immoral. By the very definition of the word, a criminal is someone who does not follow the law. When potential gun control legislation would be enacted, criminals would not follow the law because they are criminals. Most proposed gun control legislation targets assault rifles, seeing as how they have the capacity and power to be the most fatal when used in mass shootings. In reality, the majority of crimes committed with firearms are with handguns. Taking this information into account, it seems illogical to consider banning rifles in the name of public safety when considering what ramifications doing so could have (Larsen).

The argument for gun control is well established in today’s society, and for good reason. In recent history, there has been an outrageous number of mass shootings in America. For this reason, many argue that weapons that have large magazines and high fire rate should be banned to stop mass shootings. This seems like a reasonable, logical response, but in reality, it is an emotional response that needs heavy consideration. Emotionally arguing for something on the basis that it could improve safety While this would help eliminate some of the mass shootings that could potentially happen, it hardly ever stops there. Every time a mass shooting occurs, there is a large backlash against gun owners who have done nothing wrong. Many of the most recent mass shootings could have been prevented with existing gun control laws, such as the Thousand Oaks shooting in California. Had the existing laws been properly enforced, then the shooter would not have had access to the weaponry used in the shooting. The proper response to gun violence is not taking guns away from law-abiding citizens, but a stricter focus on how to keep guns out of the hands of the mentally ill (Wing).

Another argument in favor of gun control is that the Second Amendment was written during a time of different weaponry and that’s what the Second Amendment applies to. This is commonly used against the argument for less restrictive gun control. This is not true because the Constitution is the ruling law of the land, and the rest of the Amendments have evolved over time in order to accommodate different technological developments, such as freedom of speech on television and radio. Since the Constitution is the supreme law of the United States, changing any laws to any part of the Constitution without formally amending it is essentially unconstitutional.

Although the Constitution states that the right to bear arms “shall not be infringed,” there are concessions that are necessary. With these mass shootings on the rise, checking for any hits on prior mental health history and domestic abuse can help keep guns in the hands of the right people. This is a solution that keeps not only the gun rights of Americans safe but Americans at large safe (Mental Health).

Gun control in America violates citizens individual liberties, which is a founding principle of America, and something that makes it so unique. America was founded on the belief that the government exists to serve the people, and the Bill of Rights was added to the Constitution to ensure that the individual rights of citizens are protected. When citizens of the United States sacrifice their liberties in the name of safety, they will eventually lose both of these. The American system of government, which was revolutionary in its time and has established the groundwork for individual liberties globally, will be slowly dismantled if the Bill of Rights is amended or ignored. The claim that weapons like assault rifles and high capacity firearms should only be in the hands of the government is ignorant of the Constitution and the founding of America. Thinking that the citizens would be more safe with an all-powerful government is also ignorant of world history, as governments were responsible for nearly one hundred million deaths in the twentieth century (Satter).

George Santayana once said: “Those who don’t learn from history are doomed to repeat it” (Clairmont). The quote from Santayana offers a recommendation and for those who care to listen to what he has to say, and much can be learned. Throughout history, tyrannical governments have taken the civil liberties from the citizens of their countries and it never ends well. When citizens are unable to protect themselves from large, tyrannical governments, the government will do whatever they need too to ensure their vision is accomplished, in most cases. Powerful governments are the source of large death tolls from the twentieth century. China, the Soviet Union, Nazi Germany, Cambodia, North Korea, Africa, and South American countries where governments controlled the lives of their citizens, and who were responsible for the deaths of the nearly one hundred million people during the twentieth century. These are not anecdotal stories that are only applicable in specific environments and certain periods of history. People who have hate in their hearts fight harder and more viciously than those who have love and care in their heart. If Americans do not learn from history and the results of disarming in the name of safety, then America will lose what makes it so free.

Importance of the Second Amendment. (2021, Apr 21). Retrieved from https://studymoose.com/importance-of-the-second-amendment-essay 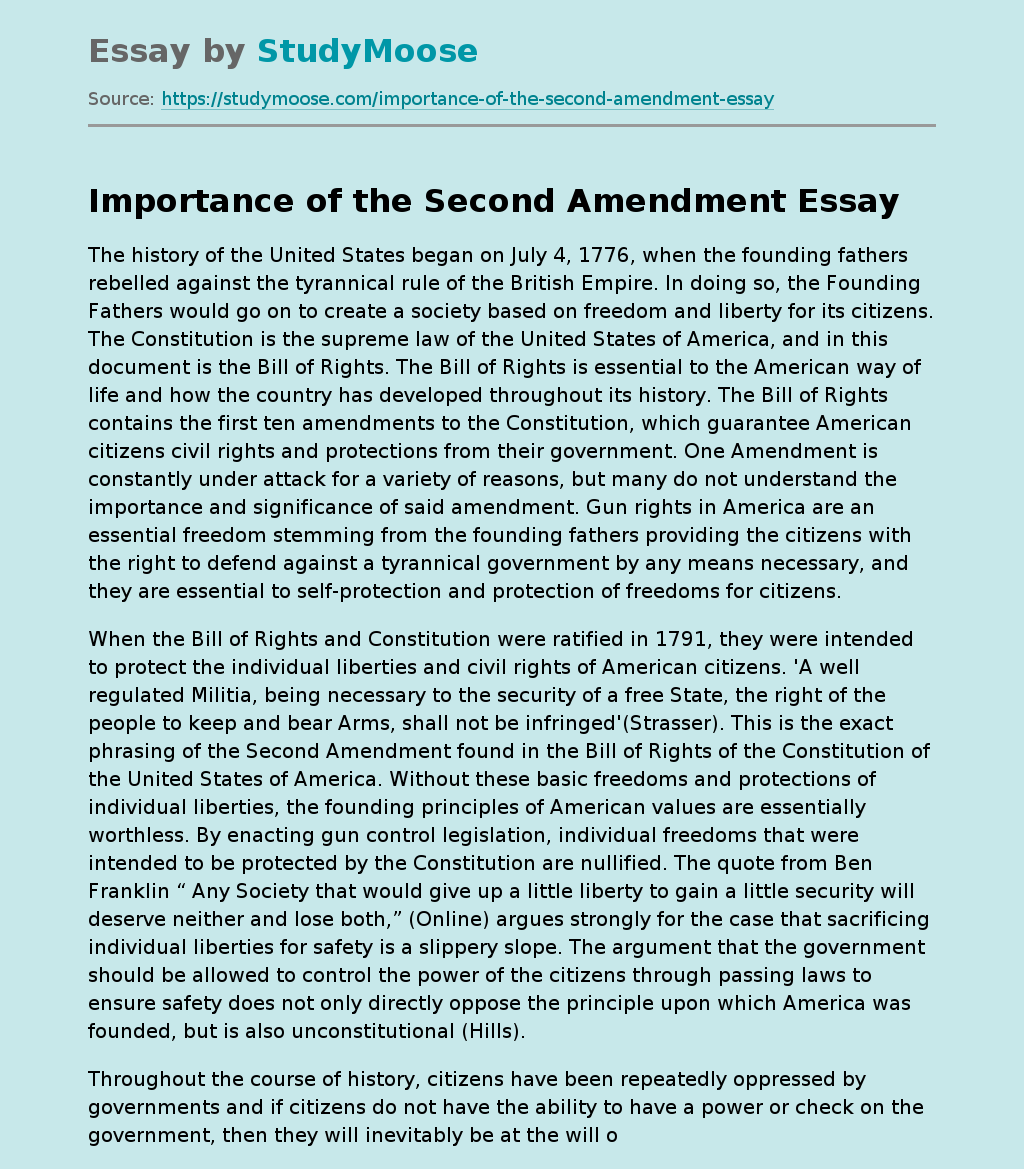