The researcher has chosen the topic “The Implementation of Plastic Bag Ban in Some Municipalities in the Philippines” because it is related to her chosen program, Bachelor of Science in Chemical Engineering. As a Chemical Engineering student, she must study the chemical processes and even changes that are taking place in the environment. This topic is related in a way that the environment and the manufacturing of plastics are concerned. As seen in the Television News and articles in the newspapers, floods caused by super typhoons have really killed thousands of people.

Don't use plagiarized sources.
Get Your Custom Essay on Implementation of no plastic policy Just from $13,9/Page

Climate change is the primary cause of this dilemma but this was aggravated by the problems of indisposed garbage that are seen everywhere.

Environmentalists are blaming the uncontrollable use of plastics and with that, several local government units implemented the plastic bag ban in their municipalities. In other words, banning plastics is their last solution to this problem. Many disagree with its implementation especially the Plastic Manufacturing Companies and its unions because of their own concerns.

Nevertheless, they were not able to stop the banning; instead more municipalities are encouraged to do the said banning.

In this research paper, she wants to prove that banning plastics is an effective solution to the destruction of the environment. She believes that the existing laws on waste management are not enough to solve the problem that’s why the banning of plastics is implemented.

She feels that she would have benefits and advantages for the research study because this will add more knowledge and information that is helpful in preparation for her future career. She also feels that this research study can answer the present problems of the society.

The article “Campaign vs garbage pushed” stated that piles of trash can be found everywhere-plastics, discarded and rotten fruits and vegetables fruit
peelings, candy wrappers, and the like. Moreover, the Ecowaste Coalition which is a waste and pollution watchdog observed the environmental problems there.

It’s also stated that Manny Calonzo, president of Ecowaste Coalition, said that they find plastic bags galore in Divisoria and the piles of mostly plastic rubbish along Recto Avenue and adjacent streets very disturbing. He added that assistance can be offered by conducting community service in the place. The spirit of volunteerism is important in doing this. (2011)

Ma. Ceres P. Doyo reported in her article “Major major: Death by Plastic” that environmental, health and justice advocates trooped to the Senate to press the lawmakers to pass a law to control the reckless use and disposal of plastic bags and to “tame the plastic monster”. The event coincided with the joint hearing called by the senate committee on trade and commerce, chaired by Sen. Manny Villar, and the committee on environmental and natural resources, chaired by Sen.

Juan Miguel Zubiri, to discuss bills filed by Sen. Loren Legarda, Miriam Defensor-Santiago and Villar on plastic bags. Legarda’s SB 1368 is “an act providing for a proactive approach in recycling plastic bags in stores and other retail outlets.” SB 1543 is “an act regulating the use of plastic grocery bags.” Villar’s SB 1103 is “an act promoting sound waste management by requiring all department stores, malls and commercial establishments to utilize reusable environment-friendly shopping bags and provide them free of charge to customers and patron, and for other purposes.” (2010)

The researcher attempts to answer the following questions in the research study:

2. What is the purpose of implementing the Plastic Bag Ban in some municipalities in the Philippines?

4. How did the Filipinos respond to the banning of plastics?

5. What are its effects?

6. What are the conclusive findings the researcher gathered in the study?

The “Plastic Bag Ban” is an effective solution to the destruction of our environment.

1. It can solve the problem on uncontrollable increase of plastic wastes in the esteros, drainages, bodies of water, and landfills. 2. This policy could promote alternative packaging like woven bags (bayong). 3. People will be more disciplined.

Implementation of no plastic policy. (2016, Sep 02). Retrieved from https://studymoose.com/implementation-of-no-plastic-policy-essay 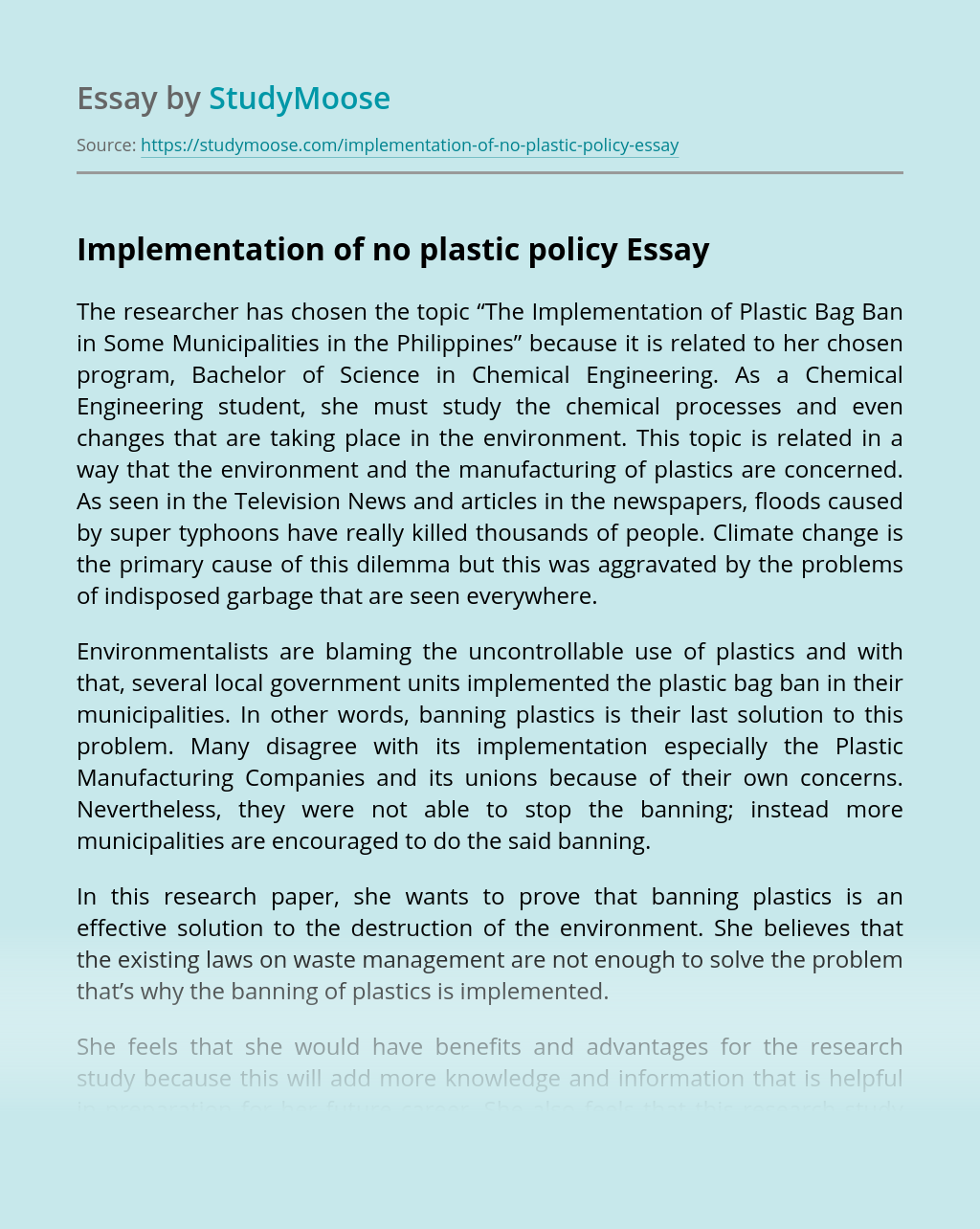 Organic vegetables and fruits are considered important food sources. They are generally inexpensive and though naturally low in fat and calories, they are stillpacked with important nutrients. However, their tendency to spoil easily in their fresh and unpreserved stateresults in organic waste. Organic waste is a type of biodegradable solid waste that comes from plants...

How does Robert gray enable the reader to shape the speakers discovery and it’s concequences in “Flames and Dangling wire”?. The impact of a discovery can be far reaching and transformative for an individual and a broader society. As conveyed in Robert Gray’s poem, “Flames and Dangling Wire”, the audience is invited to discover both...

Acknowledgements The team would like to convey its sincere gratitude to the youth members of Shimultala who participated as interviewers in the survey. Thanks are also extended to the Councilor Mr. A.K. Azad, members of the Local Project Management Committee and the people of Shimultala for their hospitality and support. Executive Summary: Being one of...

Charcoal has been considered a source of fuel for many Filipino people especially in the rural areas. According to a survey by The Central Echo (2011), more than 90% of Filipinos are dependent on charcoal for cooking. While only 1-2% use Liquefied Petroleum Gas (LPG) or kerosene due to high cost of living. However, making...