Introduction
Solid Waste Management, the collecting, treating, and disposing of solid material that is discarded because it has served its purpose or is no longer useful. Improper disposal of municipal solid waste can create unsanitary conditions, and these conditions in turn can lead to pollution of the environment and to outbreaks of vector-borne disease—that is, diseases spread by rodents and insects. The tasks of solid-waste management present complex technical challenges. They also pose a wide variety of administrative, economic, and social problems that must be managed and solved.

Don't use plagiarized sources. Get your custom essay on
“ Implementation on Solid Waste Management of Boarding Houses ”
Get custom paper
NEW! smart matching with writer

the unwanted or useless solid materials generated from combinedresidential, industrial and commercial activities in a given area. It may be categorizedaccording to its origin (domestic, industrial, commercial, construction or institutional);according to its contents (organic material, glass, metal, plastic paper etc); or according to hazard potential (toxic, non-toxin, flammable, radioactive, infectious etc).Management of solid waste reduces or eliminates adverse impacts on the environmentand human health and supports economic development and improved quality of life.

Anumber of processes are involved in effectively managing waste for a municipality.These include monitoring, collection, transport, processing, recycling and disposal.Solid waste refers to wastes from households, municipal services, construction debris andthe agricultural sector. This also includes non-hazardous, non-liquid wastes from institutions andindustries. (RA 9003) According to the World Bank (2001), its generation is greatly affected by acountry’s development.

Generally, the more economically prosperous a country is, the more wasteis generated per capita. Table 1.1 presents a comparison of municipal waste generation of differentcities in the world.

Solid waste management (SWM), on the other hand, pertains to the control of the“generation, storage, collection, transfer and transport, processing and disposal (RA 9003)” ofsolid waste in a fashion that is in accordance to societal and economic needs while at the same timecompliant to environmental standards and principles.Solid waste is a telltale sign of how citizens’ lifestyles change as a result of economicdevelopment. Furthermore, the distribution of waste generation in the different regions of a countryis indicative of its degree of urbanization. In cities, where standard of living is higher, there isusually a higher waste output compared to rural areas. This is reflective of the case of thePhilippines where its capital and largest urban centre, Metro Manila, generates almost a quarter ofthe country’s total waste generation (WB, 2001).The issue of solid waste in Metro Manila gained international attention in the 1980s throughthe Smokey Mountain dumpsite, which became representative of poverty in the Philippines(Gonzales, 2002). It used to be the country’s largest dump and is also one of the largest slums in the world (Yashwant, 2002). The government was concerned about the negative image that thisgave the country that it was eventually closed in 1995.The matter of solid waste and its management had, once again, catapulted itself into thelimelight in 2000, during which a number of issues plagued the solid waste management (SWM)sector. First came the ‘Payatas Tragedy’ in July when a huge amount of garbage in Payatas, the largest active open dumpsite in the Philippines, was loosened by heavy rains and caved in on thecommunity of scavengers living around it. Next came the impending premature closure of the SanMateo Waste Disposal Facility (SMWDF), which took in majority of Metro Manila’s solid waste atthat time, at the end of the year which aroused
panic and concerns among the Local GovernmentUnits (LGUs) and the Metro Manila Development Authority (MMDA), the bodies responsible forSWM in Metro Manila. They scurried around, desperate for alternative dumpsites and solutions.

They also rallied for the repeal of the Clean Air Act (Republic Act 8749), passed the year before,under which incineration of solid wastes was banned.During this time, the Ecological Solid Waste Management Act (RA 9003), a landmark lawwhich addresses SWM issues was in the final stages of formulation. It was finally approved inJanuary of 2001 after delays due to the political perturbation at that time. The passing into law ofRA 9003 was met by much enthusiasm by political leaders and non-governmental organizations(NGOs) alike as it was the first law in the country that addressed SWM in a non-piecemeal manner.Despite the initial optimism after RA 9003’s approval, 2001 turned out to be the year of theMetro Manila garbage crisis. The LGUs and the MMDA provided neither alternative dumpsites norsolutions by the time SMWDF was shut. Garbage dumps were literally growing everywhere in themetropolis – roadsides, waterways, vacant lots, rivers and other public places. The problem got soout of hand that Metro Manila was declared as under a ‘state of emergency’ to obtain assistancefrom the national government (The Manila Times, 2002). The crisis also caught the attention of theWorld Bank, thus its focus on the growing problem of solid waste in the Philippines in the 2001Philippine Environment Monitor (WB, 2001).Things had momentarily quieted down with the opening of the Montalban Solid Waste Disposal Facility (MSWDF) in mid-2002. The issue of SWM, however, has not completely fadedinto the background as earlier events had inspired the activism of several NGOs. Unfortunately,though, it also escalated the growing not-in-my-backyard (NIMBY) problem, making the task ofsearching for locations for future solid waste disposal facilities for the LGUs and the MMDA abigger problem. These are just a few of the challenges that face the SWM sector. By looking at itas a system, its relationships and effects with the different elements in the sector can be identified.With this, improvements can be proposed and evaluated.

1. Strategies to implement Solid Waste Management of the owner in boarding houses from waste disposal facilities through reuse, recycling, and composting activities.

Figure 1
Present the Schematic Diagram which shows the process of this study.

Conceptual Framework
The conceptual framework maps the entire process of the researcher study. The study is entitle, Implementation on Solid Waste Management of Boarding Houses.

Figure 1 is the schematic diagram.
The Geometric figures presented the following:

First Box
The study aims to assess the profile the people who respondent in selected area conducted study of research in Boarding Houses.

Third Box
The third box is the determination of the improvement of specific area in implementing process of strategies of Solid Waste Management Plan.

3. What is the improvement of specific area in implementing process of strategies of Solid Waste Management Plan?

Significant of the Study
This study is significant to the following sectors, for the reason that Solid waste management is strongly grounded in the need to safeguard the environment, conserve and recover material and energy resources, and protects public health and safety.

Students
The students are the individuals whose focus of the mind is in learning and digesting different knowledge. The students have ample time in studying than the parents, thus, knowing this reality, this work be somehow important or even extremely important for the students. If they will be using their might and time to implant the significance of this study to the people, surely the result will be good as expected. Students could appreciate the native literature because it a sign of being patriotic and showing love into the country.

Teachers
Teachers could also benefit the meat of this work, they are facilitators and they are the ones that will implant o the student’s mind the importance of
the native culture and the wholeness of being a Filipino. This is also significant to the teachers for the reason of they as teachers must also know the culture of this indigenous people and understand them of what life they are having. Thus, understanding their life, teachers could easily teach the students to stop the discrimination against their brothers and sisters that are also Filipino.

Government
localgovernments are responsible for ensuring that solid waste generated in their jurisdictions is managed in an environmentally and economically sound manner that protects public health and safety. Giving attention and lending ears to the literary pieces of the Manobo people, Government could understand the feelings of the nomadic people. The government should look and give importance to the areas where nomadic people are living. Some of the nomadic people are living with great poverty just because of the reason that their homes are far away from the progress, far away from the industries, far away from the market place to buy foods and other necessities, and most of all, far away from love and care of the other tribes which are thinking that they are superior than the others. The government shall see the reality of these people, so that their life will become easier and their livelihood products will also be easy to deliver.

Assumption Antipolo takes pride in calling its campus a ‘’green zone’. With Apostolate that aims to take care of God’s creation, the
Environmental Education Program is an integral part of the curriculum. The program as a whole installs in the student a deeper commitment to environmental stewardship. It makes use of the SEE-DISCERN ACT process to develop in the student a lifestyle of steward ship where caring is a commitment. To SEE allows the student to observe environmental realities, to DISCERN is to reflect and use her personal understanding to seek God’s plan anchored on prayers, leading her to ACT in response to God’s will. The Solid Waste Management for Schools is a guide or a step-by-step instruction or manual on how solid waste management should be implemented, and who among the school community would be the key players in the immersion process. The goal is to foster participation among children and adults, and put schools in action for the welfare of Mother Earth. The program is a cross-curriculum area of learning, wherein all subject areas can integrate environmental issues and materials in their encounters, thus helping students make informed decisions.

Assumption Antipolo students also engaging in a proper waste disposal, or proper way to segregate different solid waste around the school. The school also have a Zero Waste Campaign the Canteen and cafeteria upholds the schools advocacy promoting zero waste. Therefore, the following are practiced: Encouraging the use of biodegradable materials whenever possible, minimizing the use of plastics and briging reusable container for food and drinks. 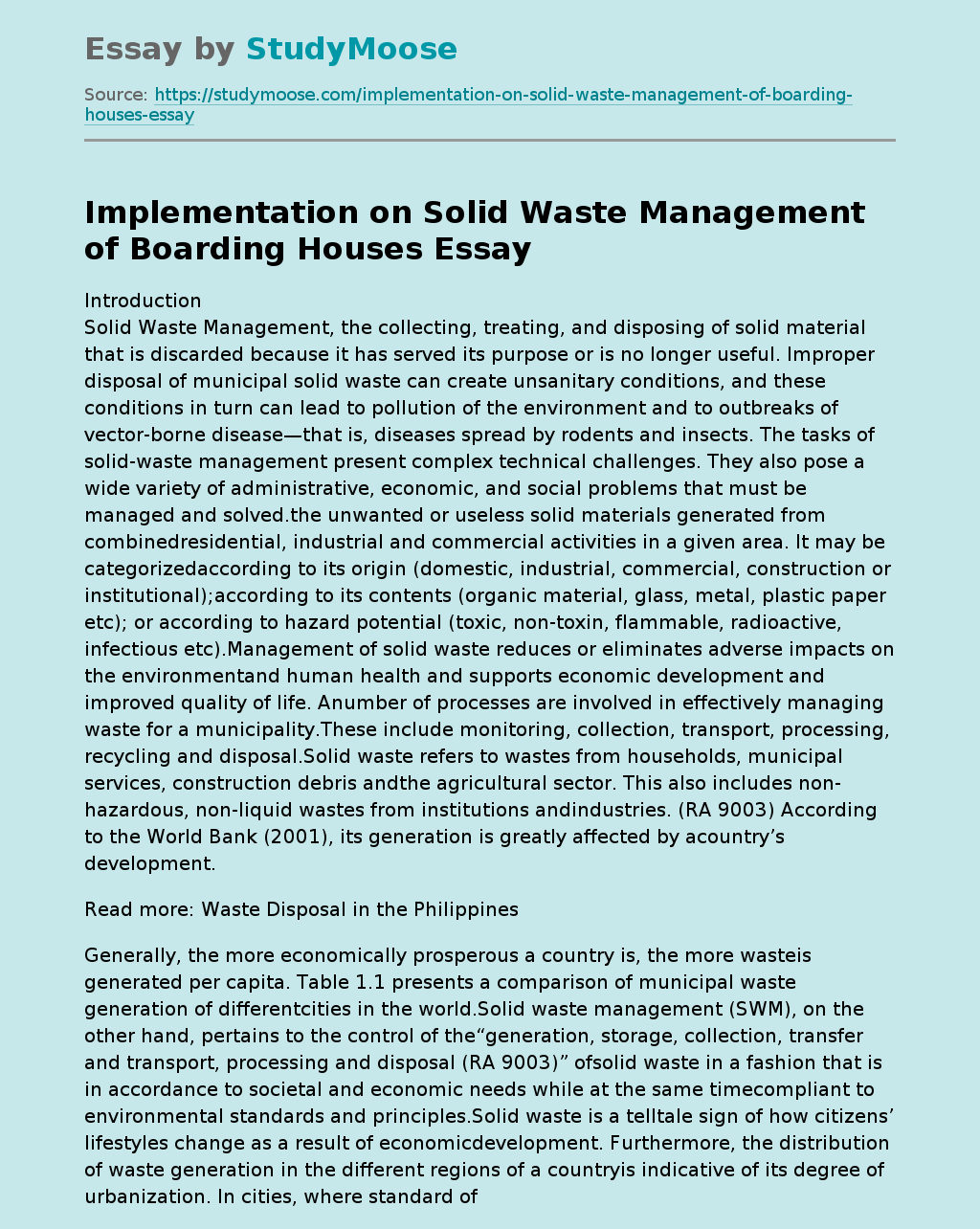