"The happiest days of your life" by Penelope Lively

Don't use plagiarized sources. Get your custom essay on
“ “The happiest days of your life” by Penelope Lively ”
Get custom paper
NEW! smart matching with writer

The Sussex area is a part of the upper class, which indicates that the environment is rich. The boarding school (St. Edwards’s Preparatory School) is very big and luxurious. That can also be seen in the fact that the school is a big mansion with a swimming pool. It’s very formal inside the school, and the parents meets the maid who is all done up – which the mom approaches a lot (page 56, line 15).

The school is very expensive, which tells that it’s not middle class area.

In the end of the story the parents mentions that the school is a bit pricey, which indicates that they aren’t entirely upper class, but more upper middle class. Something that underlines, that they are upper middle class is that they uses a very formal language. There is no slang, and they are very correct in what they say and with their grammar. In page 56 they are talking about cricket, which is very upper class. They uses direct speech, but most of time the short story are in is past tense.

The parents have a conversation, where Charles father says “Wilcox says quite a few City people send their boys here. One or two of the merchant bankers, those kind of people. It’s the sort of contact that would do no harm at all”. Those lines dedicates that Charles’s father is a businessman. The “City” is probably London, and thinks a lot about his career and to earn money. I think one of the main reasons the father sends his son away to that particular boarding school is to get contacts, because he know that the kids at that school has great families (page 56, line 25-30). He actually mentions that he could play cricket with them, which I already mentioned, is very upper class. The mother is kind of the same way. Also very self-centered, but she don’t have the same reason as Charles father.

Charles might be about 6-8 years because he is about to start at a preparatory school. Charles doesn’t like the situation and he is very uncomfortable. This can be seen in the beginning of the short story, when Charles sits in the back of the car with an unopened box of chocolate and a folded comic book. That isn’t a normal behavior for at child in that age, because usually they like sweets and comic books. Charles is very quiet, so he doesn’t say much at the boarding school. In the end when he sits in the car he hears the echo of the boy who said they shall mash him next term. The boys seems to appear nice, so maybe it was a joke but Charles really takes it to him and becomes afraid. That really indicates that he is insecure, because he even don’t want to tell his parents about that episode in the short story.

The main conflict in the short story is that conflict between Charles and his insecure personality. He can’t say his opinion about the boarding school to his parents. Maybe he can feel that his parents are more interested in business contacts and their own reputation instead of him being happy, and that creates a misunderstood parent-child relationship who can serious consequences later in Charles life. The short story is called “The happiest days of your life” and that is something you usually says about the time on a boarding school, but maybe in this case it could mean that those days are over.

The time in the story changes, and all before the headmaster’s wife is taking Charles away is in past tense, but after that it goes to present but in this case it could mean that those days are over. The happiest days were until the time at the boarding school and now it is over. The time until the headmaster’s wife takes Charles away is in the past tense and that is what was and is no more. The boarding school is now and in present. The beginning of the boarding is the ending of his happiest days of his lives. Penelope Lively maybe had it at the same day, when she was forced to a boarding school and her life is an inspiration to this short story.

"The happiest days of your life" by Penelope Lively. (2016, Sep 22). Retrieved from https://studymoose.com/the-happiest-days-of-your-life-by-penelope-lively-essay 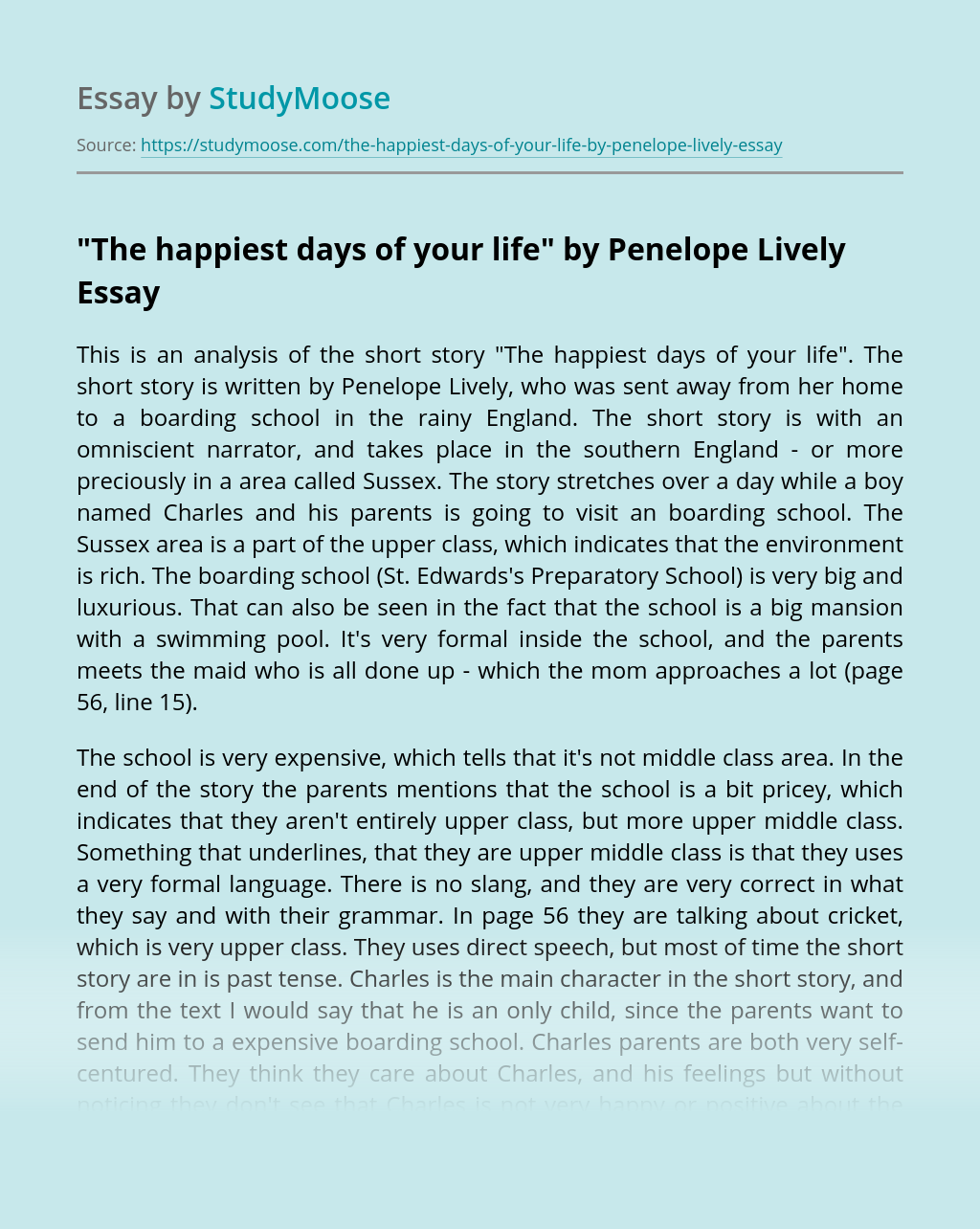