Impact of the Collision of the Old and New World on Europeans, Africans, and the Indians

The collision of the New and Old World impacted the Europeans, Africans, and Indigenous people immensely. When the two worlds were introduced to each other they set up trade routes, such as the Columbian Exchange. Although it was new for all three of them, they adjusted well to the changes over time. The introduction of the new foods, animals, diseases, religious matters, etc. made all three groups forced to accommodate.

In 1492, Africans along with the Europeans and the Indians, created the Columbian Exchange after Christopher Columbus discovered them.

Turn in your highest-quality paper
Get a qualified writer to help you with
“ Impact of the Collision of the Old and New World on Europeans, Africans, and the Indians ”
Get high-quality paper
NEW! AI matching with writers

The Africans didn’t have a choice on whether they wanted to come to the New World or not, they were shipped here on tiny boats and due to the death of the Indians the Europeans forced them to do the hard labor without any pay. They worked in farms and/or plantations for their “masters” who provided them with limited or no rights and they lived in horrible conditions. In return, the Africans received different varieties of crops, for example, potatoes, corn, beans, tomatoes, and many other crops.

Europeans also tried to convert both Africans and Indians to Christianity and succeeded.

In 1519, Hernan Cortez, plus one hundred men, landed on the island of Cozumel. The men who landed had been enslaved for many years by the Mayans, but finally away. As the Indians settled, they were introduced to a new way of life, soon becoming a “wide-range hunting society” in which they roamed the open land for buffalo. The Indians had to adjust to slave work as the Europeans had them work in the sugar mills and cane fields.

The Europeans brought along a variety of diseases, which soon killed a large group of the Indians, the population started at 1 million and ended at 200. This caused the Indians into taking revenge against the Europeans. They did so by injecting the first sexually transmitted diseases such as syphillis into Europe.

Revenge was the only feasible option for the natives because how cruel the Europeans were to them. After the invasion of Hernan Cortes in 1519 and Pizarro in 1533, the Europeans forced the Indians to give them their land and crops. The Europeans used the lands for agriculture and as sources of precious metals, and were able to successfully plant sugar and tobacco plantations. With such great demand for these crops back in Europe there was a necessity for large amounts of labor. Being that most of the indigenous population was either familiar with the land and could easily run away or was wiped out by disease, they couldn’t enslave them. To fill the void left by the indigenous people, the Europeans decided to enslave millions of Africans instead. The Africans weren’t likely to run away because of the unfamiliarity of the land and they wouldn’t know how to feed themselves. In 1545, Hernando de Soto, Francisco Vasquez de Coronado, and Alvar Nunes Cabeza de Vaca found silver in Potosoi. The Spanish wealth and power was based on the New World’s gold and silver mines, all the gold and silver made the Spanish in power for about 100 years.

The creation of the New World and the Columbian Exchange impacted three ethnicities: the Europeans, the indigenous, and the Africans. Despite the few minor setbacks the Europeans had to go through, such as the “starving time” and the spread of syphillis, the Europeans were impacted in a very positive way. They were able to find gold and silver and plant many crops, and as a result were able to create the 13 colonies. But the indigenous people did not benefit, most died from disease brought by the Europeans or were tortured and killed. Out of all three groups the Africans had the most negative impact, thousands were forced to work and they were left with no rights. The troubles from the New World still impact America to this day: Africans weren’t granted their rights back until many years later and unfortunately there is still racism, the few indigenous people left live in reservations, and because of the Europeans we have America.

Impact of the Collision of the Old and New World on Europeans, Africans, and the Indians. (2016, Mar 26). Retrieved from http://studymoose.com/impact-of-the-collision-of-the-old-and-new-world-on-europeans-africans-and-the-indians-essay 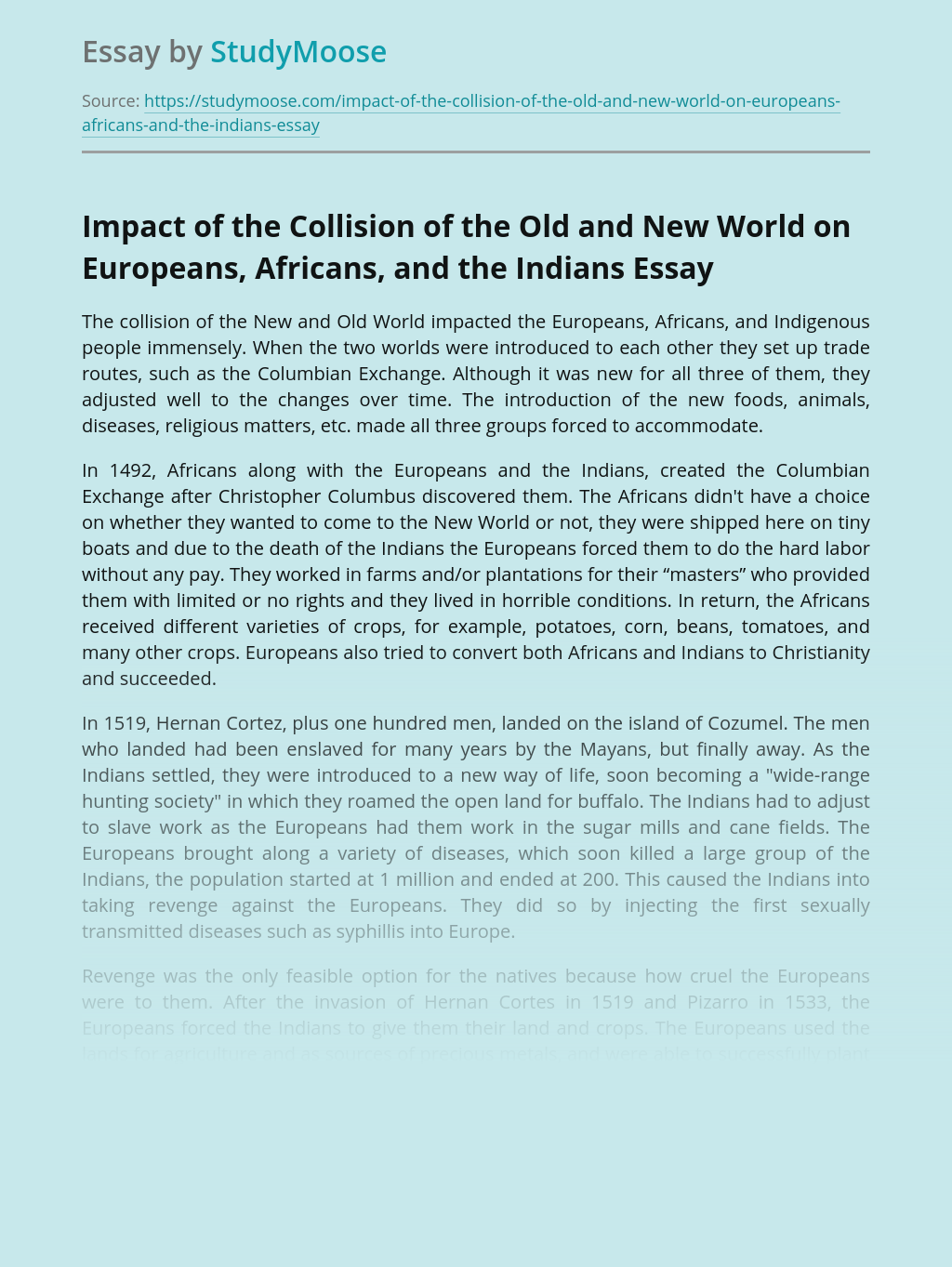 Turn in your highest-quality paper
Get a qualified writer to help you with
“ Impact of the Collision of the Old and New World on Europeans, Africans, and the Indians ”
Get high-quality paper
Helping students since 2015
Stay Safe, Stay Original