Great Impact of a King on music and theatre Sinan Erk Mutafoglu 11149 HUM 204 Prof. Filiz Ali December 2nd, 2011 In the 17th century, France witnessed political, social and artistic facts which were triggered by the relationships between Louis the Fourteenth, Jean-Baptiste Lully and Moliere. This relationship between these important figures of 17th century can also be delineated as the connection between the political power, music and theatre. Before emphasizing the interaction among them, it might be illuminating to specify their backgrounds in order to gain an insight about their relations.

Following, I am going to specify on their relationships and their influences on French music and theatre. Louis the 14th, who is named as France’s Sun King, had the longest reign in European history beginning from 1643 until he dies in 1715. He had only five years old when he became the king of France, therefore the reign was almost dominated by the Cardinal until he died in 1661 ( Louis XIV, David J. Sturdy, pg 23 ).

Following the cardinal’s death, Louis brought the absolute monarchy at the risk of taking both his mother’s and the council’s reactions (Louis XIV, David J. Sturdy, pg 34). Afterward, these reactions were also gravitated to the relation between Louis, Lully and Moliere. He established Versailles palace which was a symbol of the absolute monarchy, aiming to extract more domination of government from nobility and being distant from the population of Paris. Louis the 14th was a very important figure for the contemporary artists who were mainly supported and protected by their king.

He tried to impose the thought of glorifying the monarch and monarchy through the arts and also he used art as a tool for political gain.

For this purpose he created the Royal Academy of Dance in 1661 and the Academy of Music in 1671. He supported the artists in order to establish a unique French style both in literature and music, thus these artists were able to try to create new forms, feeling the king’s protection and support. Following the glorious years, his personal rule was affected by problems from 1685 until he died in 1715. During the Louis 14th era, Jean- Baptiste Lully ( 1632- 1687 ) was the major composer of the French Baroque style.

He was originally Italian born, a Florentine, who moved to France at the age of eleven in order to tutor Mlle de Montpensier in Italian. He was studying dance and music in Italy and then he continued to study composition and harpsichord in France. His landmark in his career was the ‘’Ballet de la nuit’’. The relationship between Louis the Fourteenth and Jean-Baptiste Lully began in this ballet which they danced together for the first time. One of the most interesting aspects of Louis XIV’s interaction with the arts was his involvement as a skilful performing dancer.

Generally he played the most attractive roles and displayed as a a god-like figure like the ‘rising sun’. In this ballet, Louis XIV gained his nickname the “Sun King” from the role of the same name that he played so successfully (Harman and Milner 1959, 171). After this ballet, King Louis took Lully as a compositeur de la musique instrumantale de Roi. Thereby, their relationship began to grow strongly and powerfully day by day. The passionate Lully gained the whole control of the royal family’s court music almost in ten years. Both of them are related to the music insanely.

For Louis XIV, the ballet had a special place, and also the music. He attended all the ballets and all the theatres despite the risk of facing opposition of his mother and all the council. He danced passionately. He was so interested in dancing, music, and theatre. He gave a permission to Lully to conduct the petits violons, a small company of extremely gifted string players in 1656. Lully quickly advanced this group beyond the achievements of the 24 violons du Roi, began experimenting with new methods of performance practices and changes in basic stylistic features in orchestral music.

On the other hand, Lully became addicted to Louis 14th; he thought that King cannot be live without him and his music. This passionate addiction may be caused by Lully’s origin. He was an Italian and the most protective and supportive person was the King for him. Some members of the council were provoking him by being Florentine and on the contrary the King was taking deep care of him. Maybe that’s why Lully wanted to be totally French in front of him. He was with King all the time with his violinists. He always thought that he would be nothing without him. On the other side, King was very affected of him and his speeches.

Both of them were related to the life with dance and music. Lully was very ambitious. He managed the royal family’s court music for many years. The other most impressive figure of that era, Moliere the master of the French comedy, was born in 1622 and lived until 1673 in France. He was born as Jean Baptiste Poquelin; however since the life of the theater was not very respectable in that period, he decided to use a pen name “Moliere” in order to spare embarrassment to his family He was a son of the rising bourgeoisie and he was educated at the great College de Clermont like most of the great writers were educated at that time.

He created comedies ranging from simple farces to advanced satires and lived almost all of his life as a man of theater being author, director, producer, manager and actor. The most impressive characteristics of Moliere were the rhytm and mime where he learned them from Italians. Moliere firstly entertained the King with his farce, Le Docteur amoureux in 1658. Following the performance, the group was patronaged by the King and Moliere finally could return to his birth city. Moliere’s enemies were especially the members of the court but the friends of Moliere were also important figures so he could continue to writing.

He got adoring responses from his audience as a reaction to his exaggerated passions in his plays. His acquaintance with Louis the 14th was coincided with one of the celebration organization of the King at Versailles, where Moliere was invited to put on stage the ‘Tartuffe ou l’Imposteur. In fact, Moliere wanted to play tragedies before his comedies; however firstly he chose to gain his audience’s appreciation by presenting them his comedies. Tartuffe was the first play that he put on stage which he wrote after this strategy.

Even if Moliere studied in a Jesuit institution, his enemies, especially the religious ones, attacked him by accusing that his play was irreligion. The council and also the King’s mother felt indisposed; but it was very important for Moliere that the King did not apply sanctions to him. The religious men also threated the King that the Church could punish them; however Louis the 14th responded that the Church could not apply any sanction to France. This was a very significant evidence that the King provided freedom to artists to create even if the Church was at the stake.

The relation between Lully and Moliere was very important in European art history because they created comedies-ballets. However Lully was thinking that the French was not suitable to use in large works like operas and he considered opera as absurd in comparison to ballets. It can be understood in the film ‘Le Roi Danse’ where Lully mentions that the Italian opera is absurd for him. Lully and Moliere worked together in comedies of Moliere even if Lully firstly considered Moliere as lunatic because of mixing his lines of poetry with Lully’s compositions.

They acted together. With the music of Lully and the theatre of Moliere, they created new point of views on art in France in seventeenth century. In the theatre of “Marche pour la Ceremonie des Turcs”, they played together. But in the end of the theatre, Lully was disappointed. After this play, he changed his mind, and step by step he started to become distant to Moliere. This divergence may be caused by their characteristic differences while Moliere was very idealist, Lully was very passionate and he was living according to his feelings.

He just wanted that his music will remain at forefront of King. Later on, Lully changed his mind following the success of Perrin and began composing and performing operas by eliminating Moliere. He didn’t want to be subordinate no more and he convinced the King that this style would be unique for France. His ballets influenced his style of opera by retaining parts like overture and entry music for dancers. These parts worked around vocale recitatives and airs that followed a specific plot. This form of opera became known as tragedies lyriques.

During the 17th century, France witnessed many occurrences triggered by the interaction between the monarchical power and art. The King Louis 14th, who was the great admirer of music, shaped and supported the musical and theatrical progress by taking a stand against the obstacles of these artists, especially Lully and Moliere. Their passions shaped their relations between them. Sometimes they ran down against each other and sometimes they stood shoulder to shoulder even if one of these three men was a King. This was mainly caused that the King also had an artistic spirit.

The music and the theatre were used to gain political power by the King while he was also enjoying it and the artists had the chance to create and compose while they were feeling secure due to great support of the Louis the 14th. 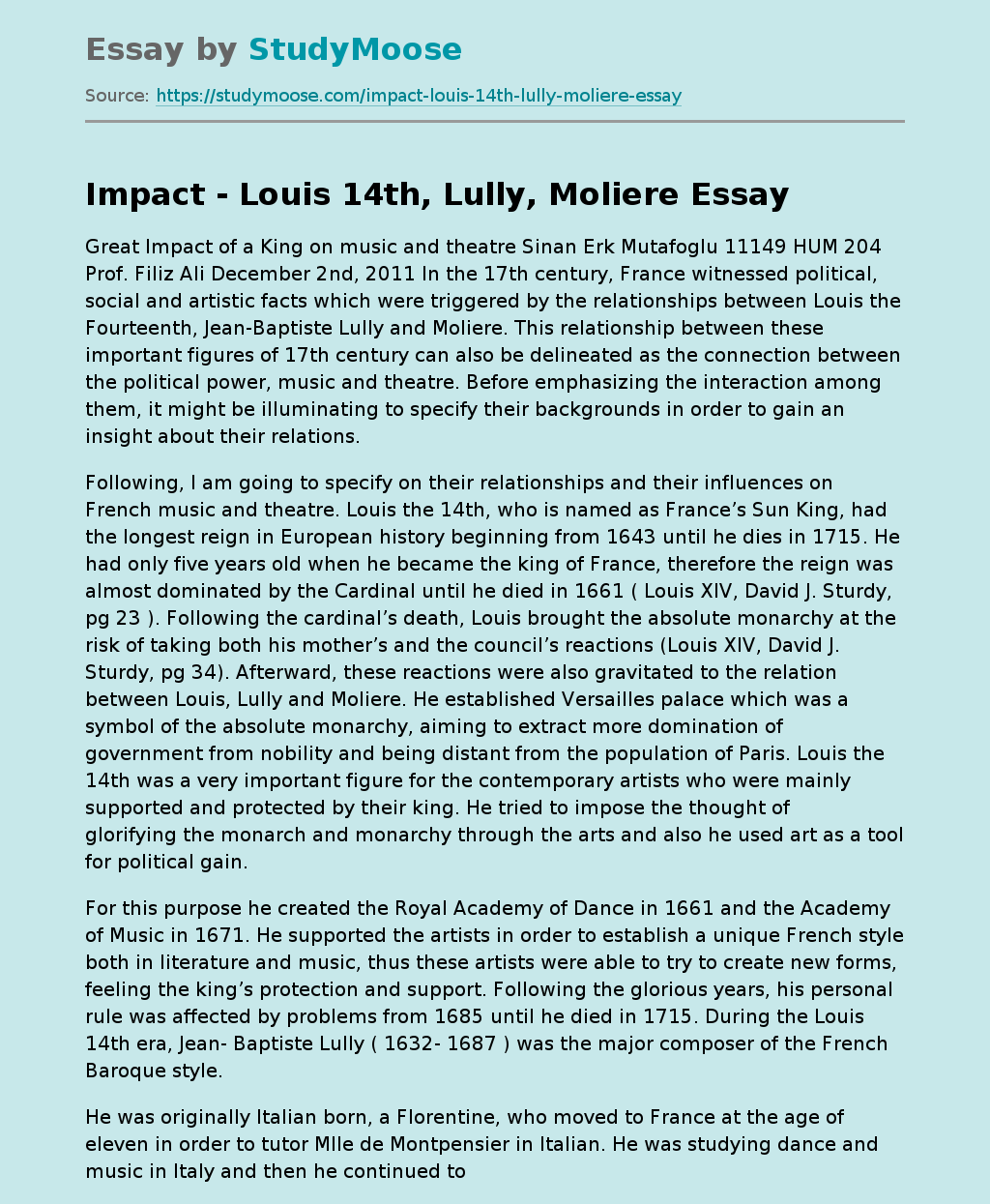