When envisioning a terrorist, many people today picture somebody from the Middle East and usually a Muslim. Nevertheless, with the recent terrorist attacks, we cannot fully blame them for picturing Arabs. However, media play a major role in this; the news describes terrorists as Muslims even though these so-called “Radical Islamists” go against Islam’s ideals, and films exemplify this even more. Some might say that racism in films has dropped because we are increasingly cognizant about social issues these days.

Don't use plagiarized sources. Get your custom essay on
“ Imagine a Terrorist ”
Get custom paper
NEW! smart matching with writer

Let’s be honest, Orientalism is still readily apparent in the creation of many popular films. Orientalism is the West’s stereotyped representation of Asia, particularly the Middle East. Best Defense is supposedly a comedy movie; the movie includes Hollywood stars like Dudley Moore and Eddie Murphy (notable for comedy). Part of this film takes place in Kuwait, and near the desert area where a military base is set up. In addition, watching similar racist movies showing Arabs in an evil way will constantly lead to negative stereotypes to develop in many people.

In 1982, incompetent engineer Wylie Cooper was trying to develop a ground-to-air missile guidance system for a newly designed mega-tank. The issue is that a section dubbed the “DYP-gyro” is not working; it is overheating something called the WAM. His inability to properly make this component work is leading the firm (Dynatechnics, Inc.) to the verge of bankruptcy. Everyone despises him, particularly Clair, his cunning but good-looking supervisor. He has an annoying wife and gets no respect at home.

One night, he meets a rather peculiar man in a bar who is talking about all kinds of crazy conspiracy theories. The man slips a computer floppy disk into Wylie’s briefcase when Wylie was not looking. The disk includes working DYP-gyro schematics. One of his coworkers notices it and assumes that the DYP-gyro was finally fixed by Wylie. He hesitantly takes credit for the work of the other man and becomes the hero in the firm. This, of course, leads to a whole series of new issues. A crazy international spy wants to get hands on the schematics of the working DYP-gyro. It also turns out that the part may not function as well as everyone thought. If the big issue is not corrected in time by Wylie, it could be a serious threat to whoever operates the mega-tank (Eddie Murphy). Eddie Murphy finally comes into the movie. He is the tank commander, Lieutenant Landry who took the tank in 1984 in Kuwait on its first test run. The test does not go well at all; the tank falls apart literally. Landry and his crew find themselves lost. They go through rural and residential Kuwait. During this scene, the movie shows stereotypical Arabs and Murphy makes racist remarks in a poor attempt at comedy. Once they find their way back, they must face a real battle situation and rescue captured American soldiers. The movie moves back to Dudley Moore. Jeff, who is trying to get the DYP-gyro plans, contacts Cooper. Knowing that Cooper took credit for the work of someone else, the FBI forces him in a set-up operation to act as a trap for Jeff. The set-up almost fails; Jeff is killed in a shootout, and Cooper is shot but survives. Cooper finally admits to Clair, an attractive co-worker, that he stole the DYP, realizing his risk of death while being put in an ambulance. This provokes an angry reaction from Clair and his wife Laura who realizes that Cooper might have cheated her. The film reaches its climax in a sequence of weaving when, having recovered, a more diligent Cooper confronts his firm with the DYP’s flaws while, in 1984, Landry (Murphy) attempts to fire the main weapon while under attack by an Iraqi gunship. The DYP causes disaster in the WAM, as had been predicted, implying that Wylie’s protest has been disregarded. Instead, the camera cuts and shows that the DYP was redesigned based on an idea Cooper had while fixing his son’s toy, later in time. The redesign works, allowing to launch and obliterate the Iraqi gunship by the artillery rockets of the tank. Both Cooper (Moore) and Landry (Murphy) are shown as heroes in the end, but neither of them ever meets.

To add, I think the biggest reason this film was such a disaster and got an average of 3 stars out of 10 by IMDB users is largely due to the fact Dudley Moore and Eddie Murphy never meet, not even once. Which seems awkward considering that each person’s work affected the other person’s life in the film. I think the film tried to use Eddie Murphy’s stardom as a selling point but had no actual plan or content. This is by far the worst movie I have seen and having Arabic stereotypes only worsens it. Eddie Murphy although shown on the cover of the movie only received 14 minutes of screen time (MovieGuy 2010). On the other hand, Dudley Moore dominated the movie but had terrible performance and had no humor involved. This definitely disappointed viewers as they had been tricked to think the main star would be the comedic genius Murphy, but it was rather the bland and boring Moore with his terrible acting.

To add insult to injury, this film dug themselves in a deeper hole by adding such ruthless stereotypes of the middle east. It is not simple and witty shots at Arab people, but it takes shot at Islam, a religion! In a pre-9/11 era, where islamophobia was still not prevalent, I would think that being racist towards Islam would bring lots of negative feedback; and surely it did. Critics completely obliterated this movie, one critic from the Morning call wrote, “The movie is racist in its depiction of black and white sexual prowess, and especially for its view of Arabs as a bunch of belly dancers, whining religious fanatics and incompetent soldiers” (Pail Willistein 1984). This may seem exaggerated, but it really is an understatement! Willistein does not mention when Murphy while having intercourse mocks the Azhaan call for Dhur salah. One user wrote, “Muslims were subjected to such irreverent images as Eddie Murphy having s## with an Arab woman, while mimicking the muezzin call for prayers heard in the background.” This scene really disgusted me as it showed Arab woman as very promiscuous and basically as they were merely belly dancers. Later, when Murphy visits the military base, he is met with idiotic Arab soldiers that are fighting with each other, one scene letter shows two Arab men banging their heads together as if they were goats fighting; this scene reminded me of Lawrence of Arabia where the Arabs fight and quarrel for no apparent or good reason. Then, when Murphy is lost, his crew has well articulate Arab men, but when they ask the Kuwaiti locals for directions, we can hear a thick accent. This reminds me of Aladdin and how the good side had no accent while the bad (Jaffar) had an accent. Murphy goes on to make fun of the Kuwaiti attire. Rather than saying the respective word for the attire, Murphy makes fun of the clothes. Although all this was done to add comedic effect, this shows the ignorance of Americans, and the disrespect they have, rather than trying to embrace a culture, they do not even attempt to make it realistic.

Such scenes can influence not just adults but also influence children. Best Defense is rated NC-17, signifying that this film can be watched easily by teens and available online allowing children under 17 to access it. Even movies that are rated G for all audiences have Arabic stereotypes. For example, Aladdin a Disney movie meant for small children has major stereotypes. The major three Arab stereotypes in Hollywood knowns as the triple B’s “Billionaires, Bombers, and Belly dancers” are shown here. The rich Sultan and the princes that come to his palace represent billionaires. Although there isn’t any outright bombing in Aladdin, we see the villain, Jaffar, use violence to get what he wants. Belly dancers are seen when Aladdin makes his entrance as an imposter prince. However, these are not all the stereotypes in the movies, but merely a small percent.

Furthermore, there are similarities between both Aladdin and Best Defense. This just shows how American cinema has made such Arabic stereotypes universal. In Aladdin, the protagonists Aladdin and Jasmine have standard American accents, making them more relatable and sympathetic to the audience. The evil villain Jaffar in Aladdin has many over-pronounced Arab features. He has a very large black turban with a long curly beard. His voice bears a strong Arab accent. Similarly, Murphy makes fun of the Kuwaiti locals; but his crew has well articulate Arab men, but when they ask the Kuwaiti locals for directions, we can hear a thick accent. American cinema has consistently exhibited cultural stereotype. Any cultural minority, immigrants, and women have been traditionally depicted as the antagonist or someone in need, as a way for the American or white man to be depicted as the hero. Comedy movies starring Eddie Murphy have always been a favorite amongst Americans, but what many don’t realize are the unconscious stereotypes. We may think that these stereotypes are not affecting us, but these stereotypes are reinforced more and more when we repeatedly see racist movies. For example, a white man can simply watch this movie and casually say “The Arab scene did not impact me at all” however, when he sees a similar situation in real life such as a rich, ignorant Arab, he immediately will generalize this one Arab and make him a representation of all Arabs. However, what caused this generalization stems from the initial movie scene and now this way of thinking will carry on for life.

To conclude, American cinema has continued to showcase films with serious stereotypes. A popular theme in films is displaying Arabs in a negative image as villains. Even before 9/11, Arabs were shown as hostile people. These characteristics included speaking with an accent, wearing native attire, acting hostile and aggressive, and affiliating with violence and terrorism. Films such as Best Defense and Aladdin is the epitome of orientalism. The films display Arab men as self-centered, violent, tyrannical, and evil. After 9/11, the Arab stereotype has not changed; Arabs are still shown as either evil bombers, self-centered billionaires, or tyrannical men that dominate their women and make them subordinate. These stereotypes can have an ill effect on everyone, ranging from adults to young children. 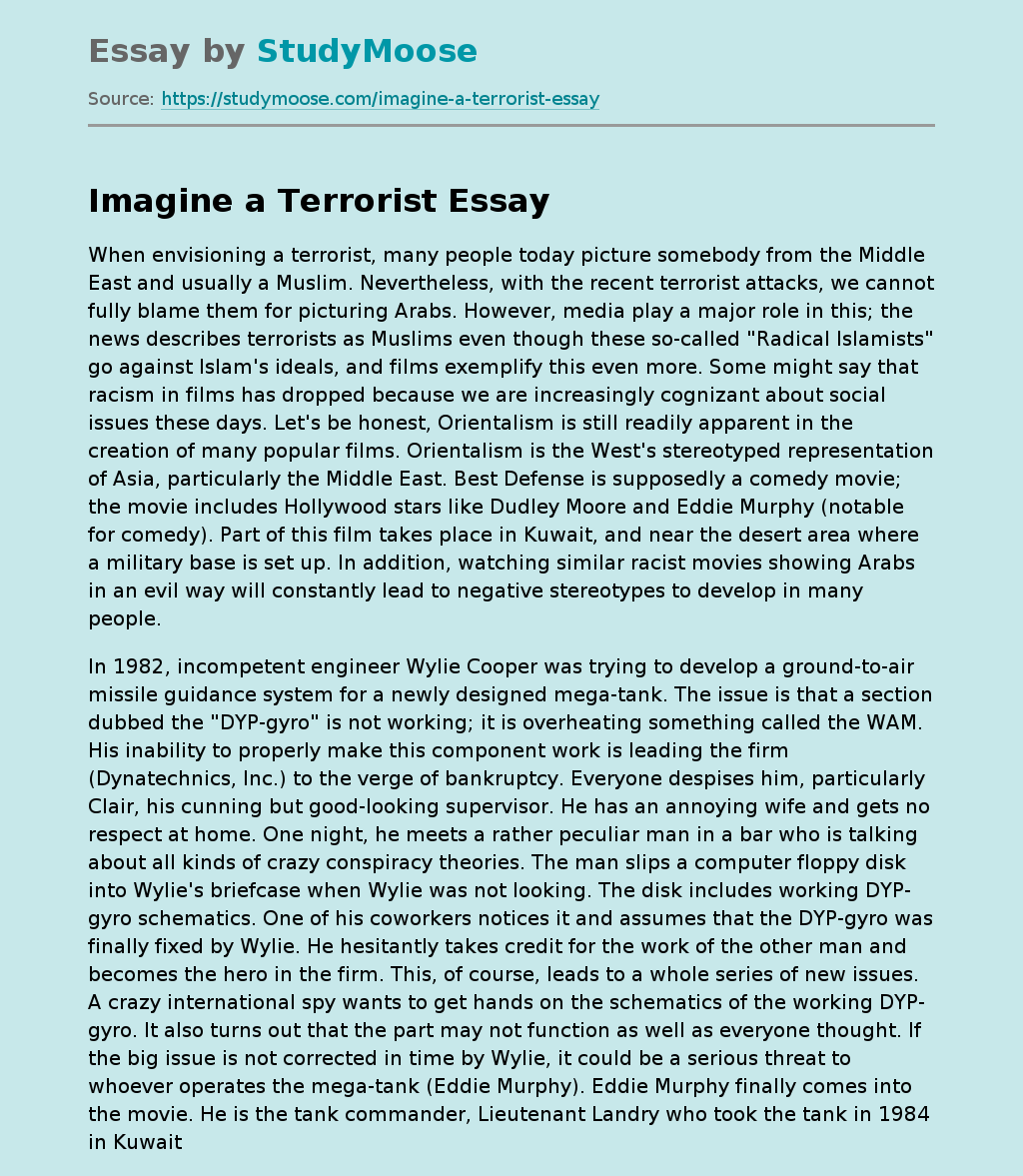