The Terrorist, He Watches

“The Terrorist, He Watches” by Wislawa Szymborska is a poem that tells about the narrator waiting anxiously for a planted bomb to explode in a bar, watching and describing people as they enter and leave the bar. When a person leaves, the narrator acts as though that person is going to miss a real treat; when a person enters the bar, the tone of the narrator seems to increase, as though all of those to experience the bomb are quite lucky indeed.

Get a verified writer to help you with The Terrorist, He Watches

The speaker of the poem, at first, seems to be that of an accomplice to the terrorist or someone who just happens to be watching and understanding what is going on – perhaps the person that has ordered the terrorist to leave the bomb. This can be seen in lines 1-7, when the narrator is describing the movements and actions of the terrorist, noting how he is now safe from the blast of the bomb. It is more likely that this first narrator is an accomplice, or someone on the inside of the job, as, in the first line, they state the time that the bomb is supposed to go off in the bar.

After the second stanza of the poem, the narrator seems to be the terrorist himself, watching eagerly as people go in and out of the bar, counting down the minutes until his bomb is supposed to go off. This can be seen from the second stanza and until the end of the poem, as the narrator now seems a little more aware of what is going on, keeping the countdown by every minute and every second.

The feelings of the narrator are more pronounced – he becomes disappointed as people go on – “The girl’s not there anymore. Was she dumb enough to go in, or wasn’t she?

(18-19) – and more pleased when they leave – “That shorter guy’s really got it made, and gets on a scooter (12)”. The role of narrator seems to change as each person is able to get a better view of what is going on inside of the bar. The accomplice took over first, as the terrorist was busy setting the bomb, then, once the narrator was outside of the bar, he was able to take over and see what was happening. The Tell-Tale Heart “The Tell-Tale Heart” by Edgar Allen Poe tells about a man and his attempts to kill the old man that he was caring for.

The former man grew tired and frightened of the blind eye of the other man – it was this eye that he felt could see everything, including things not normally met with human eyes – so he set out not to kill the man, but to kill the Evil Eye with which he viewed everything. Edgar Allen Poe uses the first person narrative perspective to help build suspense within the story by letting us know what exactly was going on in the mind of the murderer. The protagonist of the story was a cold-hearted murderer, someone whose mind would be an interesting thing to inspect.

As readers, we are able to know what he was thinking, what he was planning, and the numerous things he was feeling as a set to put his plan in motion to kill the old man. Due to the use of the first person narrative, we were able to experience his emotions almost first hand; it was though the narrator was telling us, face-to-face, the ordeal he went through to assure the old man’s death. The use of first person allows us to become closer to the narrator, close enough to understand what he is doing and why.

We can begin to feel the things that he feels; we were able to witness and to feel him when he was strong and intelligent in what he was doing, when he grew nervous and wary of the responses of the old man on the night he set out to kill him, and the fear that he felt when he was sure the police were catching on to him being a murderer. “But anything was better than this agony! Anything was more tolerable than this derision! I could bear those hypocritical smiles no longer! ” It makes us, as readers, as watchers of this tale, grow anxious at what was taking place with this man.

It comes to a point where it is like we are there, watching as these things unfold, watching the emotions of the man as he tries to convince us that he is not mad. In a sense, we become closer to him, and we begin to fear for him and take pity on the old man whose death kept drawing nearer and nearer. “Meantime the hellish tattoo of the heart increased. It grew quicker and quicker, and louder and louder every instant. The old man’s terror must have been extreme! ” That is the magic of the first person narrative – we are able to experience everything firsthand, as though we were accompanying the protagonist.

The Terrorist, He Watches. (2016, Dec 09). Retrieved from https://studymoose.com/the-terrorist-he-watches-essay

Get a verified writer to help you with The Terrorist, He Watches 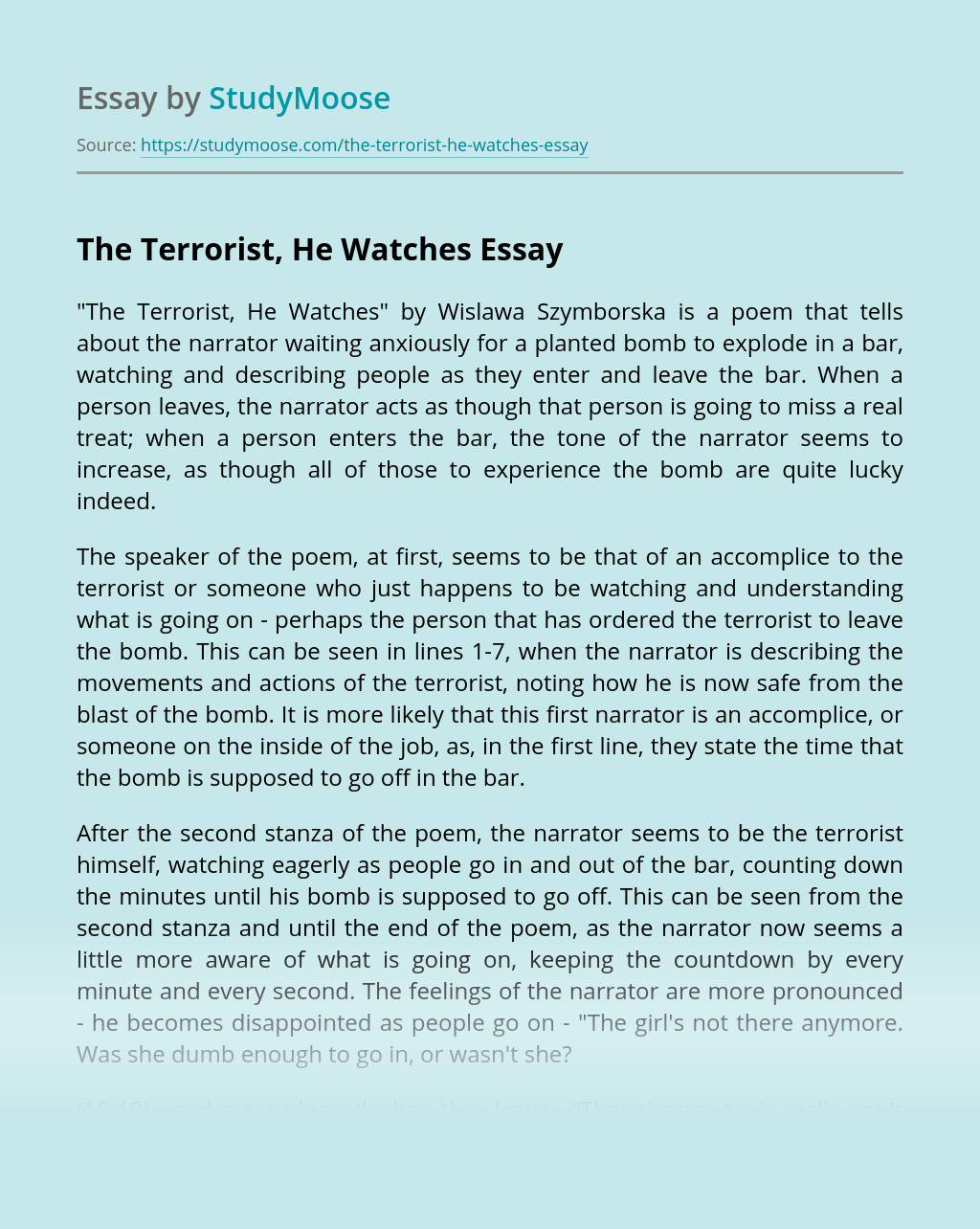 A Dream within a Dream: A Critical Analysis

A Dream within a Dream, by Edgar Allen Poe, is a poem with its central themes being sorrow, loss, confusion and frustration. The poem is divided into two stanzas, each with a different setting but both closely interconnected. It begins with the narrator kissing his lover upon their “parting” (line 2). He ponders whether everything...

Life and Death as Portrayed in Edgar Allan Poe’s

Notwithstanding the fact that life and death is a recurring and typical theme in most literary genres, famous American poet Edgar Allan Poe successfully depicted this theme through his creative and inventive literary techniques present in the poems The Bells and The Haunted Palace. Poe’s The Bells depicts a representation of life from youth to...

Get Essay
The Literary Elements of “Annabel Lee”

In his poems and stories, Edgar Allen Poe typically returns to the same themes: loneliness, lost love, madness, and depression. In his poem, “The Raven”, his theme is grief, which is also connected to the string of themes he generally incorporates into his works. Nevertheless, for this particular poem, Poe utilizes a plentiful quantity of...

Edgar Allan Poe is a well-known yet commonly misunderstood author. This is primarily due to his own personal tragedies that he suffered throughout his youth. The poem, “Alone” is a glimpse into the troubled soul of the now famous Poe and how he never looked at life the same as his peers. In the first...

The Junk Box by Edgar Guest

The message that I understood after reading the poem “The Junk Box” by Edgar Guest was that all men are good for something.  I felt that the poet was trying to relay the caring message that just because we might not need someone at a certain time, we shouldn’t just dispose of them.  There are...

Comparison of The Raven and The Erlking

In this essay, I am going to compare and contrast the two famous poems, ‘The Raven’ by Edgar Allen Poe and ‘The Erlking’ by Johann Wolfgang von Goethe. The Raven is a one hundred and eight line poem about a lonely man who is unstable after losing his wife and comes across a raven who...

Intoduction Poetry has been around for a long time. As the years go by poetry adapts to the time period. However, the authors have different views. Majority of them will read and enjoy all types of poem, but they have their own opinions. The new, has to be truly unique to the author and to...