Image of The Great War in Literature

It was a time when everything seemed to be smooth sailing, little did many know there would be a great war to happen. A war that was so bloody it ranks in worst wars of all-time. Being simply referred to as, “The Great War”. A war so great it didn’t just affect a few countries, but the entire world. The Great War came at a time when people had the illusion that Western Civilization, was on the verge of making the world an utopia.

Don't use plagiarized sources. Get your custom essay on
“ Image of The Great War in Literature ”
Get custom paper
NEW! smart matching with writer

People were excited to fight in the war, thinking they would come back glorious heroes for their Country, bleeding with nationalism. Not realizing the advancements in new technology, were going to make it much more dangerous. Instead, they thought that fighting would bring peace, not more violence. The movie All quiet on the Western Front, shows how negatively Western Civilization effected the war. Detailing how bloody, gruesome, dehumanizing it was.

At the beginning of the first World War, in the early 1900s, people were zealous with patriotism.

“World War One was greeted with incredible enthusiasm. Each of the major belligerents was convinced of the rightness of its cause, demonstrating the power of nationalism.. Everywhere in Europe, jubilant civilians sent their troops off marching off to war. The belief that the soldiers would be home by Christmas.” People were excited for the future of Western Civilization! Things had only been getting better and better for the past half century. In Stefan Zweig’s, The World of Yesterday, he expresses how the new recruits were feeling.

How they hadn’t given war a hard enough thought, there only perspective on war was how they had learned about it in School. Being persuaded to think that war was an opportunity so exciting, they were fools to miss it. They believed that Western Civilization was going to make War a breeze. But, not too far into the beginning of the war the realized it was only the contrary.

Western Civilization had brought a new kind of warfare from the advancements in technology. That had never been thought of before. Machine guns were a huge upgrade from what they used to have, single-shot rifles. Airplanes were now appearing on the battlefront. Airplanes were equipped with machine-guns and bombs. Having the option to attack ground targets or fighting other planes. Tanks were also introduced in World War One, allowing soldiers to maneuver around tough terrain. Making this war different then all wars before. With these technological advancements that had much more effective weaponry, brought the death rates up substantially.

Soldiers were around death significantly more then ever imagined at the time. Mentally taking a large toll on a soldier psyche, the physical mutilation took during the war was witnessed daily by soldiers only trying to avoid the same fate. In All Quiet on the Western Front, it is evident with Paul when he is given leave to go home and tries to cope with regular civilian life. Paul says to a civilian, “What is leave? A pause that only makes everything worse… I ought to never have come on leave”. To give an example on the mental intensity the war had, the United States is great to focus on, viewing the effects that came.

The United States came to the war in 1917, with only a year remaining in World War 1. But the war still took a huge destruction on the country. The U.S. industrial production had fallen to half of it had been in 1929 to 1933, having 15 million people unemployed. In the 1920s Woodrow Wilson created the Fourteen points in the Versailles Treaty which formed, the League of Nations. The league was formed to ensure peace in the world, due to everyone’s fragile state. Not having to worry about more war, being able to focus on more economical strategies, where FDR had many. After Wilson’s term, FDR won in a landslide election for his formation of public work program ideas, now known as the New Deal. The New Deal takes credit for employing over 2 million citizens, Social Security, unemployment insurance, and many more.

All Quiet on the Western front, does a great job illustrating how the war was. Beginning with them talking about how great it would be to fight for your country, and become a hero. The main character Paul was very positive at the beginning of the war. He even once said “Today is wonderfully good”, after receiving letters from home. It slowly progressed to the point where they were never happy. The soldiers were realizing the real unglamorized version of what war really is. The film depicts this war as a place where young men get tricked into going . Showing how deadly and gruesome the new style of war, trench warfare was. It showed how dehumanizing it was for German soldiers, portraying them at the end of the movie as chickens that were scared of war. As well as shows the alienation soldiers felt on account of the carnages they were forced to witness and the progressive nature of warfare as these new technologies were introduced.

Image of The Great War in Literature. (2021, Dec 02). Retrieved from http://studymoose.com/image-of-the-great-war-in-literature-essay 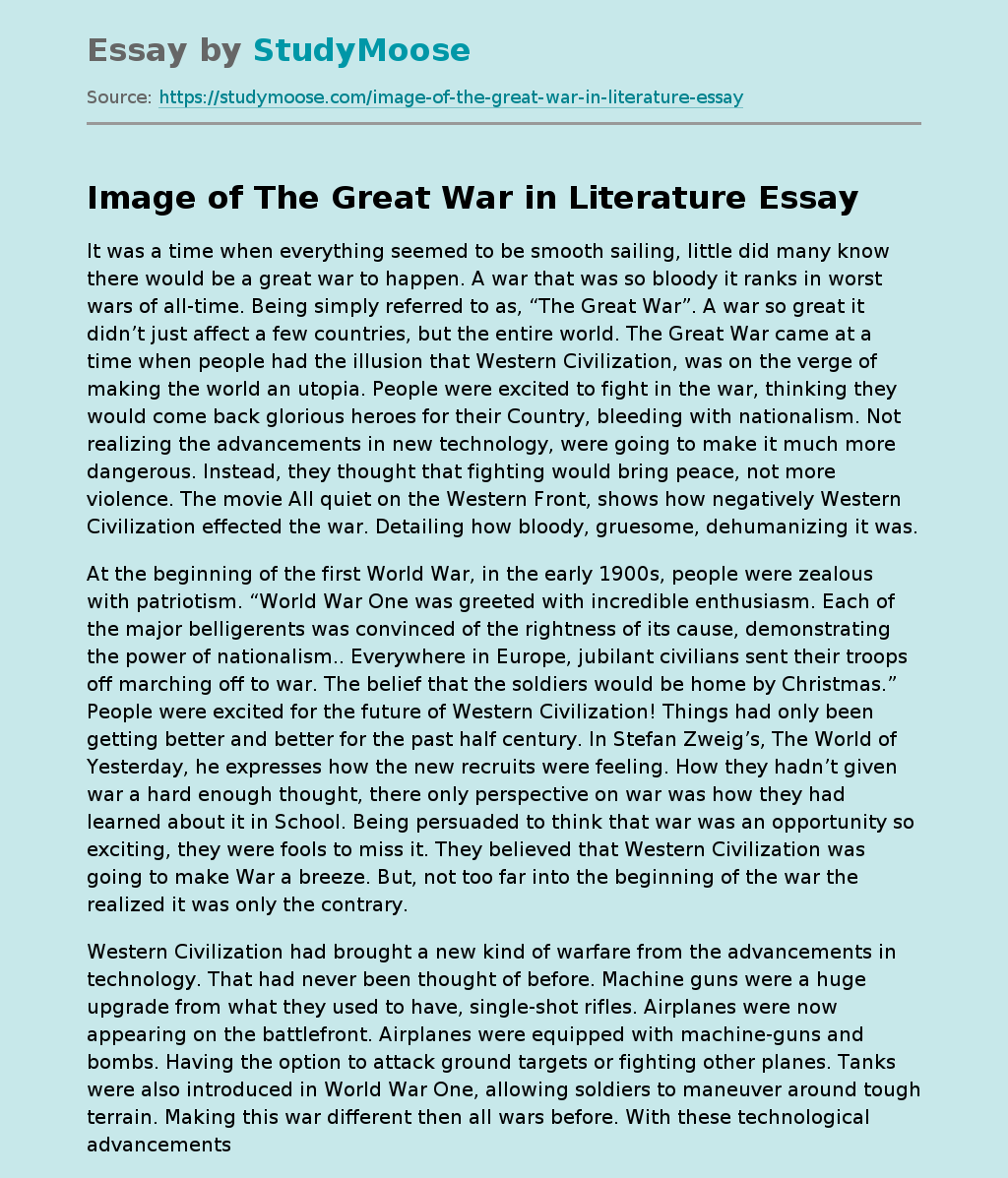