Identification of food constituents in milk

Milk provides a useful dietary source of calcium, which is vital for the growth and maintenance of bone and tooth. Milk is the first source of nourishment as it played an important role in human nutrition.

The constituents in milk that are vital in food preparation are enzymes, vitamins, pigments, salts, sugar, fat, and proteins. Different milk samples which contain different food constituents will have a different nutritional value respectively. Sudan (III) is fat-soluble dye used for staining of triglycerides (fat). It is used in the experiment to detect for the presence of fatty acids. It will appear as red globules if fatty acids are present in the milk sample.

Benedict’s reagent is used to test for the presence of reducing sugars. The solution will form a brick-red precipitate when the milk sample contains reducing sugar (glucose, maltose, lactose.)

Sugar that can form an aldehyde and ketone in the presence of an alkaline solution is known as reducing sugars. The Biuret test is used to test for the presence of protein. The biuret test is based on the ability of Cu (II) ions to form a violet-coloured chelate complex with peptide bonds (-CONH-groups) in alkaline conditions.

In Biuret’s test (consist of sodium hydroxide and copper (II) sulphate solution),the solution will turn to purple when the proteins are present in the milk sample. Proteins are organic compounds important for growth and repair. Protein molecules are composed primarily of amino acids linked together through peptide bonds.

(B) 1. 6 test tubes are obtained and numbered them from 1-6.
2. The materials listed in Table 1 are added.
3. The contents of each tube are mixed thoroughly.
4. The colour changed of the tubes contents are recorded.

1. 2cm3 of K1 obtained is poured into a test tube and added by 2cm3 of Benedict’s reagent. The reagent with the K1 solution is mixed thoroughly. 2. The test tube is shaken occasionally when placed in the water bath with the temperature of 94ᶿc and left for 5 minutes. 3. The colour changed is observed and the observations are recorded. 4. Procedures 1-3 are repeated with another sample of milk, K2. The observations are recorded.

1. To 2cm3 of K1 obtained in a test tube, 2cm3 of 10% potassium hydroxide solution is added into it and the tube is shaken to mix the contents. 2. 0.5% copper sulphate solution is added a drop at a time and the tube is shaken continuously. The drops added did not exceed 10 drops. 3. Procedures 1 and 2 are repeated using another sample of milk, K2 in place of rest solution.

Sudan III is used to determine the presence of lipids. It will stain the fat cells red. Sudan III is usually using in lipid test. First, the liquid being test and water are filled to a test tube about half full. 3 drops of Sudan III are added to test tube and being shaken gently. There will form a red-stained oil layer separate out and float on the water surface due to the presence of fat.

In the part A experiment, milk droplets of K1 and K2 are released into the copper (II) sulphate solution gently. After released, both of the droplets are not dissolved in it. The K1 droplet slowly sank in the copper (II) sulphate solution while K2 droplet slowly floated on the top of copper (II) sulphate solution due to the different density. The density of K1 was higher than the density of K2 and copper (II) sulphate solution while K2 was lower density than CuSO4 solution. This experiment is used to determine the fat contained in different types of milk by the movement of milk droplets in CuSO4 solution. The higher the density of milk, the lower the fat contained. The results showed that K1 contained less fat compared to K2. Therefore, K1 was low-fat milk while K2 was full cream milk. In the part B experiment, cooking oil, salad oil, full cream milk, and distilled water were mixed with Sudan III in different test tubes for determining the lipid. Lipids are insoluble in polar solvents for example water and can dissolve in non-polar solvent. Lipids are less dense than water and will float on the surface of solution.

Test tube 1, 2, 3, 5, and 6 stained red showed the presence of fat while test tube 4 was the only sample liquid that did not stained by Sudan III which fat absent. In reducing sugar test, Benedict’s reagent was used. Samples of milk, K1 and K2 became orange colour solution when tested with Benedict’s solution and heated. The observation showed that there was reducing sugar presented in both two milks. The solution added with Benedict’s reagent will change colour from green to red depend on the concentration of sugar provided. Before heating, K1 and K2 were bluish milky solution because added with blue colour Benedict’s solution. The colour of the milk changed during heating in the water bath. During the heating section, both of K1 and K2 were changed to green colour and finally orange colour solutions were formed. K1 produced darker colour of orange than K2 and precipitate formed in K1 showed that the sugar concentration of K1 was higher than K2.

The biuret test is based on the ability of Cu (II) ions to form pink or purple colour when attached with peptide bonds in alkaline conditions. This was used to test protein in milk K1 and K2. In protein test, both of two samples of milk formed slightly purple milky solution as a result of reacting with potassium hydroxide and copper (II) sulphate solution in Biuret’s test. The solution turned purple in the end of experiment indicated that milk contained protein. After 0.5% copper sulphate solution added to K1, it became 2 layers solution of slightly purple milky solution at top and white colour milk at the bottom. The different concentration of protein can show by observing the different level of purple colour formed. The slightly purple colour formed in K1 was darker than K2 showed that higher protein concentration presented in K1.

1.Released the drop of milk inside plastic pipette at the center of CuSO4 solution to avoid affection of movement of milk droplets in part A. 2.Shook the mixtures with Sudan III by using stopper as it is toxin. 3.Carried out the Biuret test for proteins at room temperature as it will cause negative results. 4.Added 0.5% copper sulphate solutions not exceed 10 drops as it will cause negative results. 5.Handled potassium hydroxide carefully as it is caustic. Washed affected area immediately if it contacted with the skin.

The experiment identified the major food components in different sample of milk. The part A experiment indicated that K2 milk sample contained more fat compare to K1 milk sample. K1 was low-fat milk while K2 was full cream milk. The part B experiment was conducted to determine the presence of lipid by adding Sudan (III) into different test tubes. Sudan III will stain it and form red-stained oil. The result showed that Test tube 1, 2, 3, 5 and 6 contains fat while test tube 4 did not contain fat. When tested with Benedict’s reagent, K1 milk sample produced darker colour of orange than K2 milk sample and the precipitate formed in K1 showed that the sugar concentration of K1 was slightly higher than K2. K1 milk sample formed more slightly dark purple solution than K2 when conducted in Biuret’s test. Therefore, it can conclude that K1 contained more protein compare to K2.

•Analysis of the Chemical Components of Milk. 2000. Retrieved October 27,2012 from: http://uncw.edu/chem/Courses/Reeves/OnLineLabs/NonScience/9-milk%20lab.pdf 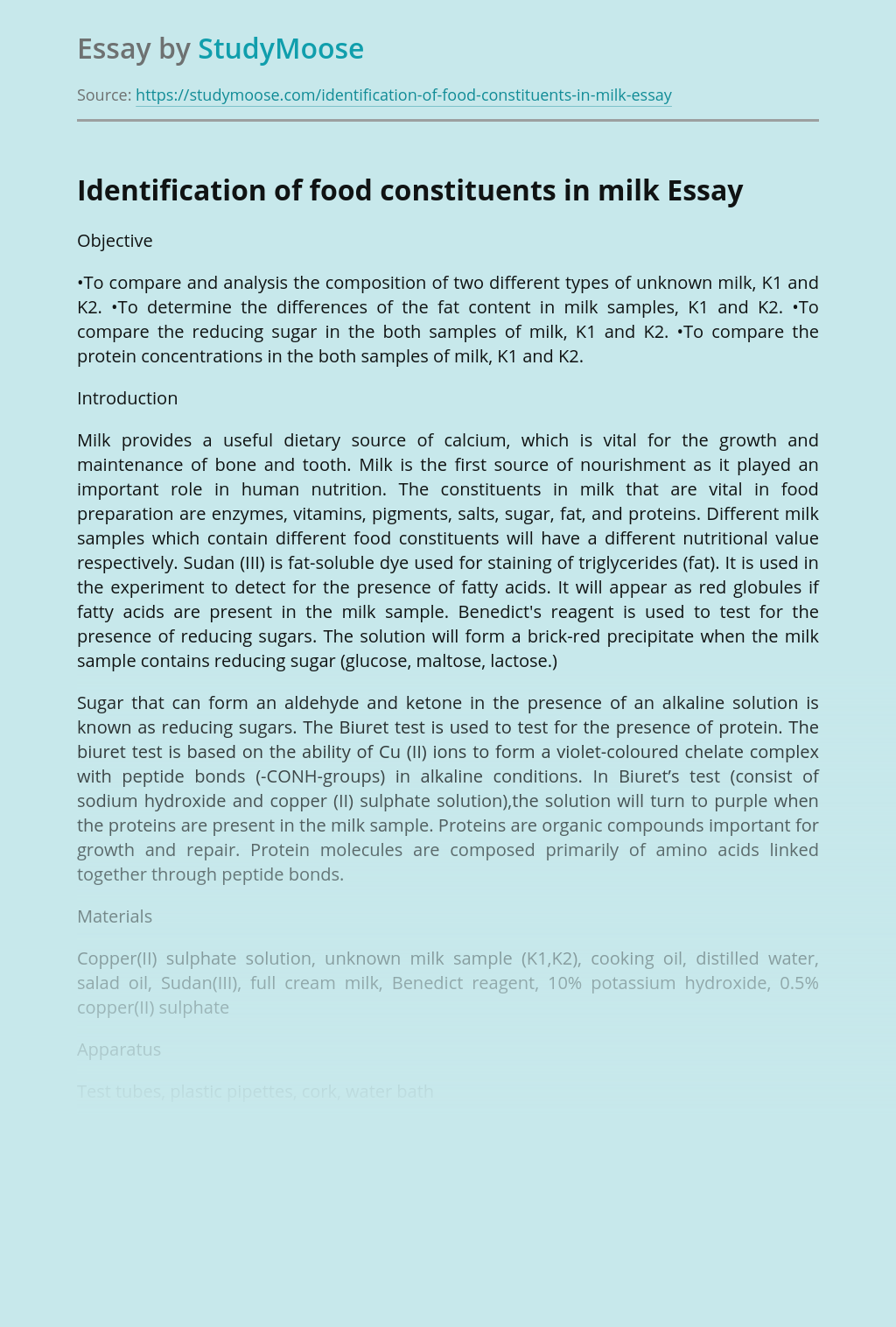 Don’t waste time
Get a verified expert to help you with Identification of food constituents in milk
Hire verified expert
$35.80 for a 2-page paper
Stay Safe, Stay Original