A series of biochemical tests was carried out to identify unknown carbohydrates. There were six carbohydrates that needed to be identified; they have been randomly labelled A-F. The carbohydrates are glucose, fructose, maltose, lactose, sucrose and starch. There was six tests that were carried out to help identify them, these were: Iodine Test, Solubility in Water, Benedict’s test, Acid Hydrolysis, Barfoed test and Diastix test.

The aim of the experiment which was carried out was to identify the unknown carbohydrates by subjecting them to a series of biochemical tests.

There was 1g of each solid carbohydrate contained in bottles labelled A-F, 10ml of deionised water was added to each bottle using a measuring syringe. The bottles were shaked well to ensure that the carbohydrates were complete dissolved. The solubility of each carbohydrates was recorded and the solutions were retains for further testing.

If the carbohydrates dissolved completely in water to give a clear view, this meant they were either a monosaccharide or a disaccharide, if the solution was cloudy then it was a polysaccharide. The next test that was carried out was the Iodine Test. 15 drops of solution and 5 drops of iodine were added to a test tube and observed for any colour change. This was repeated for each carbohydrate. If the solution turned blue-black, the carbohydrate is starch.

Carbohydrate E turned blue-black while the others had no colour change therefore it was concluded that Carbohydrate E was identified as starch.

As Carbohydrate E was identified as starch, there were no further tests required on this solution. The third test that was completed was the Benedict’s test. In this test, 40 drops of each solution was added to the test tube and 10 drops of benedict’s solution was then added, the test was placed in a boiling water bath for 5 minutes. After 5 minutes, the test tubes were removed and were studied to see if any of the solution gave the ‘brick red’ precipitate. 4/5 of the solutions gave a ‘brick red’ precipitate. This meant the 4 that gave this result was a reducing sugar i.e. glucose, fructose, maltose or lactose. The one that didn’t must be sucrose.

Further testing on carbohydrate D was carried out to confirm it definitely was sucrose. Acid Hydrolysis test was carried out on this carbohydrate D. 40 drops of a solution with drops of 0.1M of hydrochloric acid was added to a test tube and placed back in the boiling water bath for a further 3-4 minutes. After 3-4 minutes, it was removed and 5 drops of Benedict’s solution was added and it was put back in the water bath for 5 minutes. After 5 minutes, it was clear to see that a ‘brick red’ precipitate had formed. This confirms it was sucrose as it is the only non-reducing disaccharide in this experiment. No further testing was carried out on carbohydrate E. Barfoed test was carried out on the remaining 4 carbohydrates. 40 drops of each solution was added to a test tube with 5 drops of Barfoed reagent. All four test tubes were placed in a boiling water bath, changes were observed whilst in the water bath, 2-3minutes for instant changes, then 15 minutes for slower changes.

The results that were recorded from the tests carried out closely matched the expected results. The times that the precipitate should formed within were often longer than expected, this may be because there was an error with counting the drops of solution into the test tube so it took longer to react with the reacting agent.

The water bath took longer than expected to get to a certain temperature and sometimes couldn’t reach the right temperature required. The results at the end were the same but just took longer to achieve them. During the Benedict’s test and acid hydrolysis test, the solution never gave a proper ‘brick red’ precipitate but more of a brownish colour; this may be because the concentration of acid hydrolysis and Benedict’s solution was too low to give a proper ‘brick red’ precipitate.

Throughout this experiment, I have achieved the results that were expected. There were six carbohydrates to be identified with several tests to be carried out on them. They were correctly and accurately identified. To keep the experiment valid, I made sure I measured the solutions exact and kept the temperatures of the water bath. 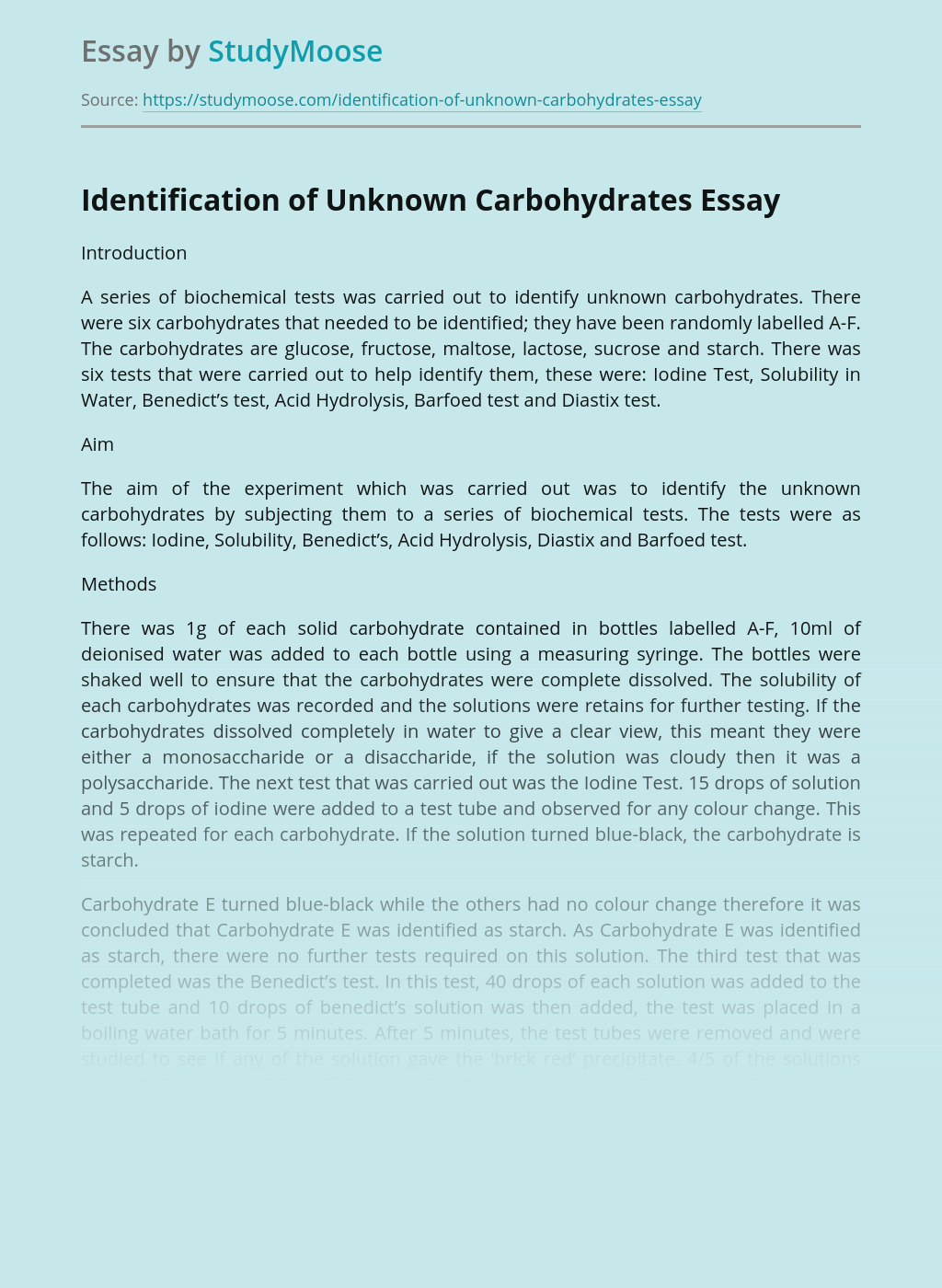 Don’t waste time
Get a verified writer to help you with Identification of Unknown Carbohydrates
Hire verified writer
$35.80 for a 2-page paper
Stay Safe, Stay Original