Depressing, sad, sorrowful emotions fulfill the reader’s mind when they read I was only 19 poem. It is a protest song written by Redgum that means the Australian folk. It is a story which describes a physical and spiritual journey of a 19-year-old boy who is forced to face the horror of Vietnam War. The song lyrics are similar to the ballad. The reader may identify several thematic lines which are depicted in the poem: difficulties of Vietnam War, its negative influence on the individual, the meaning of culture.

These subjects are shown via mentioning the national towns in Australia “Nui Dat” and “Vung Tau.” Other themes refer to the history of the Australian nation, protests against war, feeling of soldiers and veterans.

There are various stylistic devices used in Redgum I was only 19 to emphasize on certain words and emotions. Repetitions, colloquialisms, metaphors, rhetorical questions prevail. The repetitions occur in the main phrase which is a title of the song: “I was only 19.

” It is used to reinforce the fact that very young boys had to go to the war. Although he was only 19, he had to fight for his nation and face the brutality and cruelty of war. The words such as “VB,” “drinking tinnies,” “til the morphine came and killed the bloody row” identify the colloquial language. Using such phrases allows the reader feel a tighter relation of the writer to his Australian nation. In addition, there are several rhetorical questions which are used to add philosophical meaning of the poem: “And can you tell me doctor, why i still can’t get to sleep?” This stylistic device is used to show that soldiers are in depression because no one can answer their questions.

A metaphor is another technique which is implemented in the poem I was only 19 Redgum. It is used to describe the feelings of soldiers more explicitly.

The spiritual and moral decay of the individual is one of the key themes of the song. The writer is a 19-year-old boy who dreams about good future, spending time with nearest and dearest. It is that period of life when a person falls in love, starts adult life, develops the career, and experiences all the other positive emotions. However, the author and his peers are deprived of such happiness. They are obliged to go to the war, although none of them want to sacrifice their precious life. Because of these thoughts, the protagonist is devastated. He does not understand the sense of living. Moreover, his soul cannot find peace even at night when everyone sleep: “And night time’s just a jungle dark and a barking M.16?” The time for relaxation for him and other soldiers is just waiting for another fight. Nobody knows when the battle starts, and enemies begin shooting.

Religion is another significant theme raised in the song. The author refers to God several times in the story. However, it is important to single out the meaning of religion in the poem. There is a repetitive line used three times: “God help me.” At the first phrase, he asks the religious creature to save him because he is only 19. It means that the boy understands that such an age is not normal for wars. There is only God who can help him answer the questions because the boy is disappointed with people. Gruesome wars are not good for any age, but people do not understand this. That is why the boy begs for help in God because he symbolizes hope. There is no specific reference to the religion because the God is used in a general meaning. He denotes belief in victory and peace.

During the war the significance of friendship and mateship becomes striking. Sometimes the soldiers do not have the desire to live, but they struggle more and more just because of their mates. The writer also refers to this theme, and says: “You wouldn’t let your mates down ’til they had you dusted off.” Friendship becomes even more meaningful than the duty of a soldier or event personal desire to live. It happens because soldiers are kept under the same circumstances, and nobody will ever understand that better. They even do not have to discuss this. Just being together means more than sharing a tragic postwar story with someone who has not been there.

The song finishes with very philosophical lines: “And the Anzac legends didn’t mention mud and blood and tears. And the stories that my father told me never seemed quite real.” The boy is dispirited because nobody prepared him for such cruelty. He sees deaths, tortures, blood, fighting, aggression, violence. There is no explanation and logical reason for such awful deeds. However, people continue the war because there must be someone who wins and somebody who loses. The young boy understands that the reality which he faces is much worse than he has ever expected. No stories, legends, songs can ever depict the whole horror of what any war brings to the humanity.

The song “I was only 19” is a real treasure for Australian folk literature, although its content is tragic and sad. This poem is full of expressive means and stylistic devices which show the writer’s rich vocabulary and good feeling of stylistics. The reader needs to research some of the words to understand all the nuances of the poem because some of them are colloquial. However, even after the first reading or hearing the song, its emotional message is clear without any extra explanation. This song proves the deleterious influence of any war on individuals and the society. People should analyze such poems and their vital sense to prevent the same mistakes which are depicted in “I was only 19.” 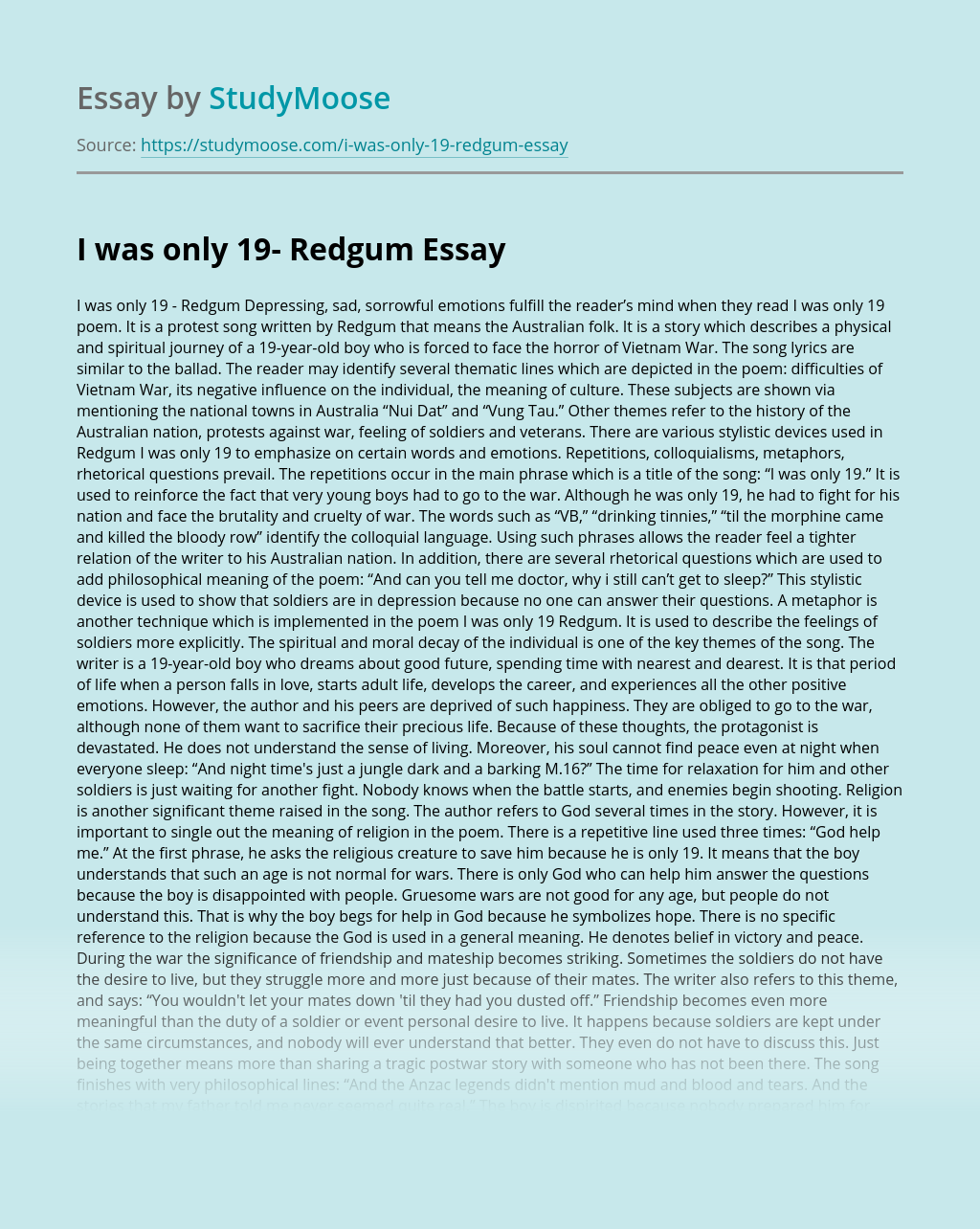 St Augustine and the Understanding of Evil

St Augustine and the Understanding of Evil – Introduction        St Augustine took a very interesting position on the debate surrounding the problem of evil and the existence of God. From the viewpoint that he developed – the position maintained is that evil is caused by humans and not God (Wawrytko 50). The...

"The Broken Tower" by Hart Crane

A Broken Tower, by Hart Crane, is a metaphor-rich poem that is very ambiguous but seems to describe the difficulties of the creative process and the way in which the artist is bound and compelled by it. Crane uses many religious metaphors and references, directly mentioning God and also bells, which are associated with churches....

Living during the late 1600’s, Edward Taylor lived through a time of many hardships. With the constant battles between colonists and natives going on, he lived in fear of his home and life being in jeopardy. Yet, through this terrifying time, he wrote poetry that earned him the name of the best colonial poet. Some...

The Loudest Voice By Grace Paley

The story opens with clear elements of social setting relating to the narrator’s life in a Jewish community. The names of the people in the story are, for the avoidance of doubt, very Jewish (“Mr. Abramowitz” line 5, “Ah, Mr. Bialik” line 6). Opening the story with characteristic Jewish names helps us formulate an identity...

Sympathy For The Devil

In the poem Sympathy for the devil, the speaker uses many different historical allusions and understatements to gain the readers sympathy for him. The speaker of the poem is the Devil and he tries to make it sound as though he is forced to be around all of the death and despair so that the...

In the first two books, Aslan is a clear-cut figure. Aslan is what Jesus would be like in Narnia. He acts as a parallel and inspires fear in his enemies and love and devotion in his friends. He makes the four children high kings and queens, and banishes evil from his kingdom. It is like...