I-Kuan Tao is classified as a syncretistic sect that had rooted from Mainland China but because of Government’s transfer of control to Communism after the World War II, it had immigrated to the island of Taiwan together with the ousted Central Government. There it had flourished its numbers of followers through the years that made it the third most popular faith in Taiwan1. According to the Country Profile of Taiwan dating March 2005, of its 12. 7 million religion members, 6. 6 percent were believers of I-Kuan Tao, next to the two most prominent, the Buddhists, 42.

Don't use plagiarized sources. Get your custom essay on
“ I-Kuan Tao Trough the Years ”
Get custom paper
NEW! smart matching with writer

9 percent and the Daoism believers, 35. 6 percent.

Like any other religion, it had tried to propagate their teachings outside its host country. I-Kuan Tao had succeeded to have significant number of co-believers in the countries of United States, Thailand, Malaysia, Indonesia and Japan. I-Kuan Tao, literally translated as “The Tao that unifies all with the one”, is a syncretistic sect because it believes that with the corroboration of existing beliefs, it could make a unified set of rules that would govern the people and would lead them to salvation on the Day of Judgment.

According to the Purpose of Tao by an I-Kuan Tao sect in USA, I-Kuan Tao recognizes the five world religions namely the Taoism, Confucianism, Buddhism, Christianity, and Islam. But since I-Kuan Tao is of Chinese origin, many of its beliefs came from the first three. Since Chinese had high reverence to their ancestors, purity of the soul, respect and moderation, I-Kuan Tao had adopted these and they were formed as its fundamental rules.

The last two religion recognized by I-Kuan Tao had been added to the modern day I-Kuan Tao because they had considered the similarity of its teachings to the first three.

The name I-Kuan means “penetrating with one” or “one unity” and is derived from a passage of Analects where Confucius said “an all-pervading Truth”. The name Tao has many meanings including “way”, “path” or “Truth”.

I-Kuan Tao definitely has a long history. According to Zhu-zi’s Doctrine of the Mean that the “Origin of Tao is from heaven and absolute; it actually comes from within and is inseparable. ” Literally, no words or language can describe the origin of I-Kuan Tao. The heritage of Tao can be classified into two categories. First, the origin of Tao in the continuity link refers to the period starting from the time of Patriach Fu-xi up to the early Ching Dynasty.

Second was the Origin of Tao in the creative link refers to the period during the rule of the Ching Emperor Shun-zhi. The second origin was taught to have permitted the ninth patriarch Huang De-hui in Lu-shan of Jiang-xi to set up “Xian Tian Tao” or the Way of Former Heaven, now known as I-Kuan Tao2. Since 4,500 years ago, the religion I-Kuan Tao is being taught, especially in overseas Chinese communities, around the world. Basically, it is a new religious movement that originated in the twentieth century China. It is a religion that incorporates much older elements from other religions such as Confucianism, Taoism and Chinese Buddhism.

The name I-Kuan Tao, also called Yi Guan Dao, can be translated as the persuasive truth and it recognizes the validity of other non-Chinese religions like Christianity and Islam. As of now, I-Kuan Tao has over 45,000 followers with over 3,100 temples.

“The Tao part of the I-Kuan Tao Heritage is the oldest, going back at least to the time of Huang-Di, the legendary emperor who lived over 4,500 years ago. I-Kuan Tao states that the Tao is the real meaning and the spiritual truth behind all religions, philosophies, and schools of thought. It is also the source of everything, the driving mechanism of evolution, and the life force of the universe. This concept is named Lao Mu, the personified universe”. “About 2,000 years after its ancient beginning, the sage Lao Tzu came and reviews the Tao beliefs and concepts into the classic Tao Te Ching.

Another sage, Chuang Tzu, contributed to the expansion of the Tao beliefs with his stories, metaphors and a different sense of humor. At about the same time that Chuang Tzu and Lao Tzu were spreading their concepts, there are also other sages who were developing their own perspectives on life and spirituality. One of these sages is Confucius. He became popular as a great teacher and scholar as he revised social customs and ethics. And if you make your way south of China, the Buddha will teach you the path towards enlightenment.

These teaching also have big impact on the Chinese culture. And I-Kuan Tao identifies them and adopted these teachings into its system. ” “Five hundred years after Lao Tzu came another remarkable teacher named Jesus4. His teachings, the Christian teachings, served as the foremost foundation of spirituality in the West. And just like with Confucianism and Buddhism, I-Kuan Tao embraced and incorporated the Christian Teachings. As a result, many Tao practitioners respect and study the Bible, again seeking the truth and wisdom that can bring all different beliefs closer together”. 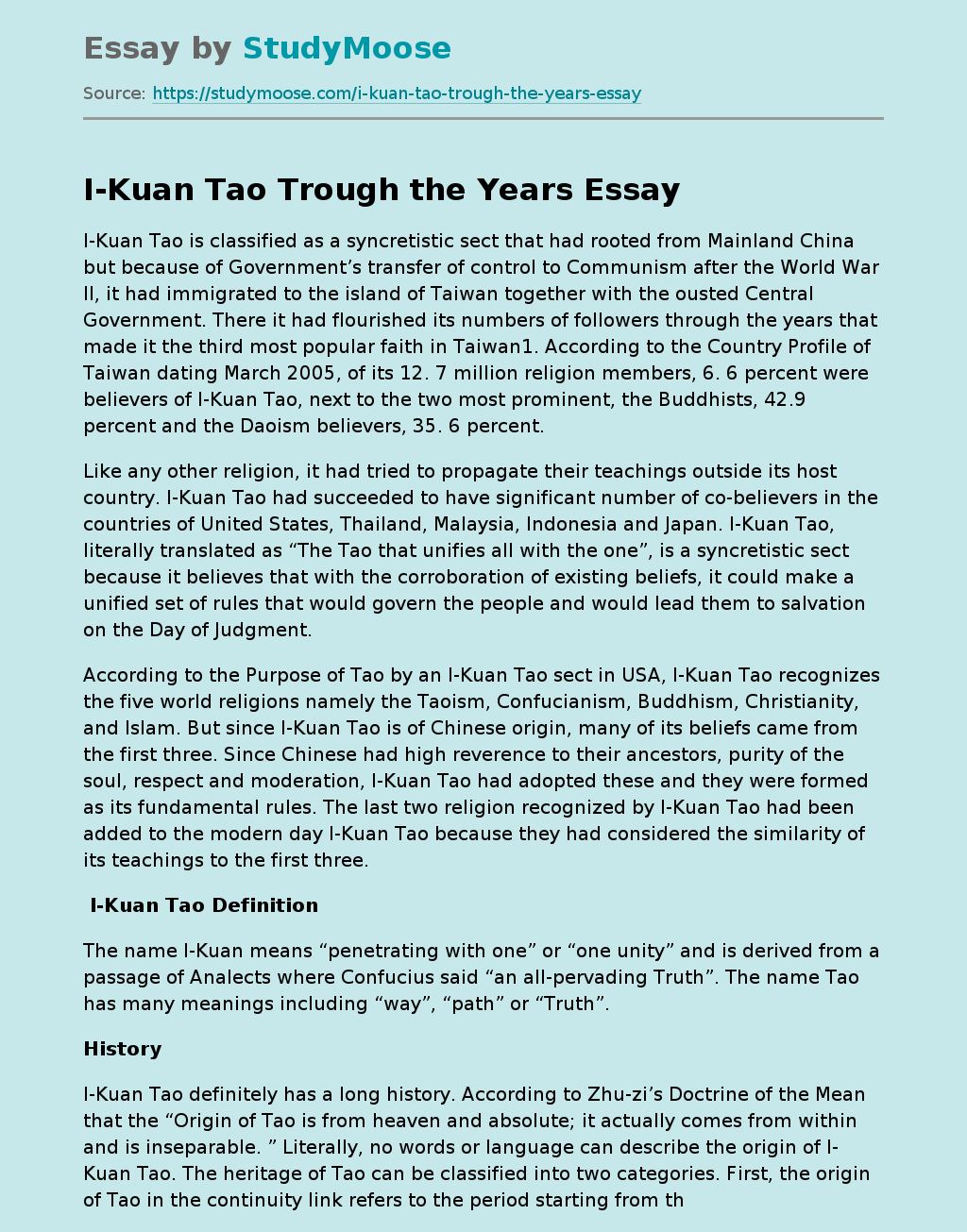