Humorists have played a substantial part in any society for as long as everyone can remember. Whether it’s your common, light-hearted comic or the one who’s trying to rebel and prove a certain point with humor, there will always be someone idolizing them. For instance, in his book Status Anxiety, Alain De Botton declared that humorists play an absolute vital role in our society because they are able to avoid otherwise dour consequences. While I believe that Botton’s logic is correct in many examples such as television comics and editorial cartoonists, there are also just as many other examples to prove how humorists are not completely vital.

Don't use plagiarized sources.
Get Your Custom Essay on Humorists in Society Just from $13,9/Page

Television comedians do indeed avoid consequences by masking their underlying message with humor. A perfect example is the crew and hosts of Saturday Night Live. They are able to successfully take real life scenarios and manipulate them into their carefully planned skits, whether it’s about Barack Obama, other political figures, or any number of controversial current events; the cast and crew are able to dodge any repercussions because of their humorous effect.

Not only do people use shows like Saturday Night Live as meaningless entertainment, but, if I have to guess, a lot of people also end up gaining valuable knowledge about what may be happening around the world. This assumption could be used to support Botton’s vitality point, considering many people don’t watch the news or make an effort to learn about current events, so one could conclude that these comical television shows are vital to society in order to act as a news casting show. While this might make sense initially, it also helps disprove Botton’s opinion. Because these shows use humor to get their point across, it is also skewing what actually may be happening for comical purposes, so while people may be gaining knowledge, they’re actually gaining a biased, misrepresented view to the situation.

Among the many types of humorists included with the television comics, editorial cartoonists are yet another prominent group who use humor to represent current events, without being penalized for their controversial views. These cartoonists use visual stimuli to provoke a laugh from their viewers; they distort the appearance of people, recount sensitive issues in a entertaining way, and use subliminal messages to get their opinion out to the public. Many of these editorial cartoonists aren’t penalized because they submit their work to an online board anonymously or they already have a “superior” reputation where nobody wants to create a dispute with them, but furthermore, these cartoonists aren’t penalized because the way they depict these events are within a common agreement of their viewers.

Now there may be a plethora of types of humorists who don’t receive repercussions, but contrary to Alain de Botton’s reasoning, humorists are not absolutely necessary to our society. They may be able to successfully reach the public in an entertaining way to promote topical situations, however, humorists are not the only type of people who act to spread their opinions. Granted, humorists may be the only ones who don’t receive consequence, but activists, editorial columnists, and certain types of criminals all act in the same way many humorists do: advocating their opinions to the public. Activists create campaigns, go on strikes, and create public awareness to a certain incident; editorial columnists skillfully write a column and post it for anyone on the internet to access; certain criminals even commit their crimes in order to rebel against an unjust law. These examples all disprove Botton’s reasoning, humorists aren’t vital because there will always be other people creating a public awareness to whatever may be inequitable.

According to author Alain de Botton, humorists play a vital function in our society because they are able to say things that otherwise may be dangerous or impossible to say directly, as stated in his 2004 book, Status Anxiety. I personally believe his logic has its faults and strengths; while television comics and cartoonists may avoid these dangerous consequences, they are not the only ones to promote current events to the public, such as activists and editorial columnists. But regardless, it is well known by everyone how humorists have made a huge contribution to society for ages. 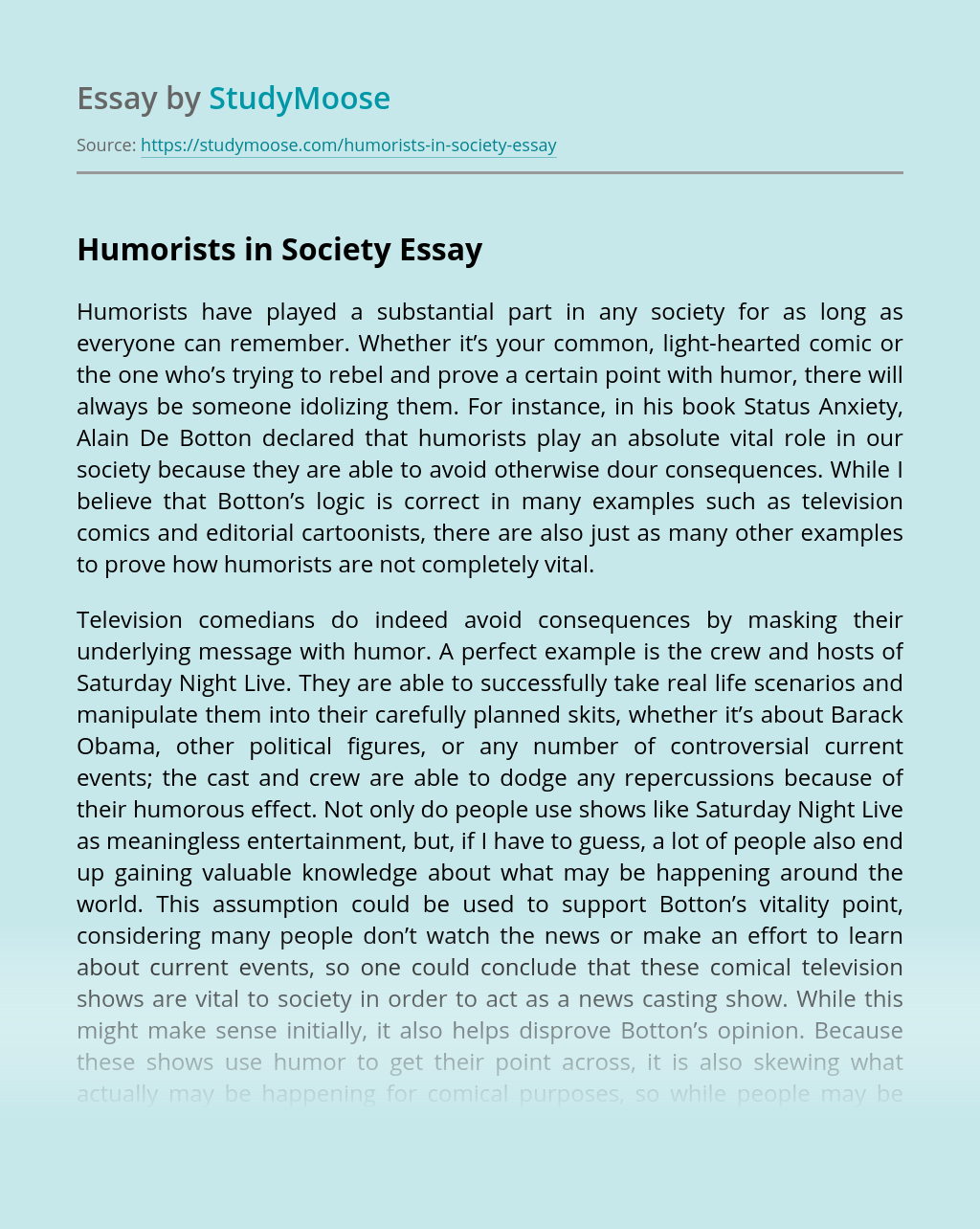 The Role of Leadership in Shaping Organizational Culture

During commercial presentations, it happens quite often to see the commercial director explaining to a client what the company does, what kind of services provided, who are the potential customers and the best results recorded. Rarely, it is possible to assist to a presentation on who the company is. In fact, we tend to focus...

Recently, Wallace and his personnel evaluated business strategy in the production division. After revision, it ended up being apparent that the marketing, engineering, and manufacturing methods ought to be updated. The shipper Business has actually diversified into 3 separate departments now, being the Electrical Products Department, the Materials Department and the Advanced Products Department. EPD...

The way in which men are represented throughout different media texts fluctuates depending on genre, cast and other aspects. A prime example of this is The Expendables, in which casts the great action film heroes of past and present, ultimately representing men as strong and brutish. Continuing with The Expendables, the men are shown to...

Every single person has a personality that is unique to their persona, albeit they may look identical in appearance such as twins. Theories have been developed and fine-tuned throughout the last two centuries, and most notably by some of the more well-known psychologists of the last century. Alfred Alder, Carl Jung, and perhaps the most...

In this task I am going to discuss how the federal government supports the advancement of e-business and I will use example to support my answers. Also I am going to produce a personal development plan to help a private to prepare for increased usage of service online. Government e-commerce policies about online company The...