CHANGING ROLE OF WOMEN IN THE SOCIETY

“A woman is the full Circle. Within her is the power to create, nurture and transform” Diane Mariechild.

Historically women in India were revered and the birth of a girl was widely believed to mark the arrival of Lakshmi — the Goddess of wealth and riches. Women have been considered ‘janani’, i.e., the progenitor and ‘ardhanigini’ i.e., half of the body. Women are also considered to be an embodiment of Goddess Durga. Women have shouldered equal responsibilities with men. So if history has incarnated women to be the goddess of wealth and riches or Goddess Durga herself, so why there had been gender discrimination in the society since ages? Why sex-selective abortions are there? Widespread discrimination against women is, however, reflected in recurrent incidents of rape, acid throwing, dowry killings, wife beating, honour killings, forced prostitution, etc.

Don't use plagiarized sources.
Get Your Custom Essay on CHANGING ROLE OF WOMEN IN THE SOCIETY Just from $13,9/Page

Some of these issues were highlighted by ‘Satyamev Jayate’ (Truth alone prevails) — an acclaimed television show hosted by Bollywood icon Aamir Khan.

A global poll conducted by Thomson Reuters rated India as the “fourth most dangerous country” globally for women, and the worst country for women among the G20 countries.

Gender discrimination is not only inequitable but also hampers the development of the nation. Evidently no country can sustain its development if it underutilizes its women, who constitute almost half the population. Thus, to fight against the said issues women have changed their role in the society, from being housewives, timid and uninfluential to being a employee, independent and assertive, self-reliant and confident. For centuries, woman and their rights have been oppressed by the dominance of man. There has been continued struggle for the recognition of woman’s cultural roles and achievements, and for their social and political rights. It was very much a patriarchal society for woman, which hindered or prevented woman from realizing their productive and creative possibilities. They have been oppressed to a point where they were treated as a completely different species. They were in a country that seemed to be a dark tunnel with no hope, dreams, or sense of fulfillment.

These ideas where seen in the play Merchant of Venice written by William Shakespeare in c. 1598 when Portia and Nerissa have to dress up as men so that they can enter the court room to help Antonio because woman are not allowed to enter courtrooms along with many other public places men had deemed unbefitting for woman. Their only identity was being a mother or housewife and nothing beyond that. They were timid and uninfluential. But now women have been given their natural birthrights, and they are now able to do everything males can do. Their role has changed in the society. They are now the bread-winners of the family. They perform a variety of jobs, from being astronauts like Kalpana Chawla to famous sportsperson like Sania Mirza, from being politicians like Sonia Gandhi and Meera Kumari to writers and winners of Booker Prize like Arundhati Roy. This change in role has also increased the versatility of women by managing household and work with equanimity. Being the bread-winners of the family i.e. being employed has made women independent, self-reliant and confident.

Financial income of the family has also increase leading to better standards of living. Women are now participating in international events. The attitude of people towards women is changing too. Women are now foraying into all fields. They have become scientists, successful teachers, politicians, literary figures, astronauts, philosophers etc. No frontier is now forbidden for womankind. But according to me, this change of role has a disadvantage too. Due to both working father and mother, the children suffer. Children are losing the moral values that earlier were present in every person. The quality time which a mother used to spend with her children is missing. This is really harmful as children are losing the necessary moral and ethics. This is my opinion and neither I am not protesting the act of women working outside.

CHANGING ROLE OF WOMEN IN THE SOCIETY. (2016, Feb 26). Retrieved from https://studymoose.com/changing-role-of-women-in-the-society-essay 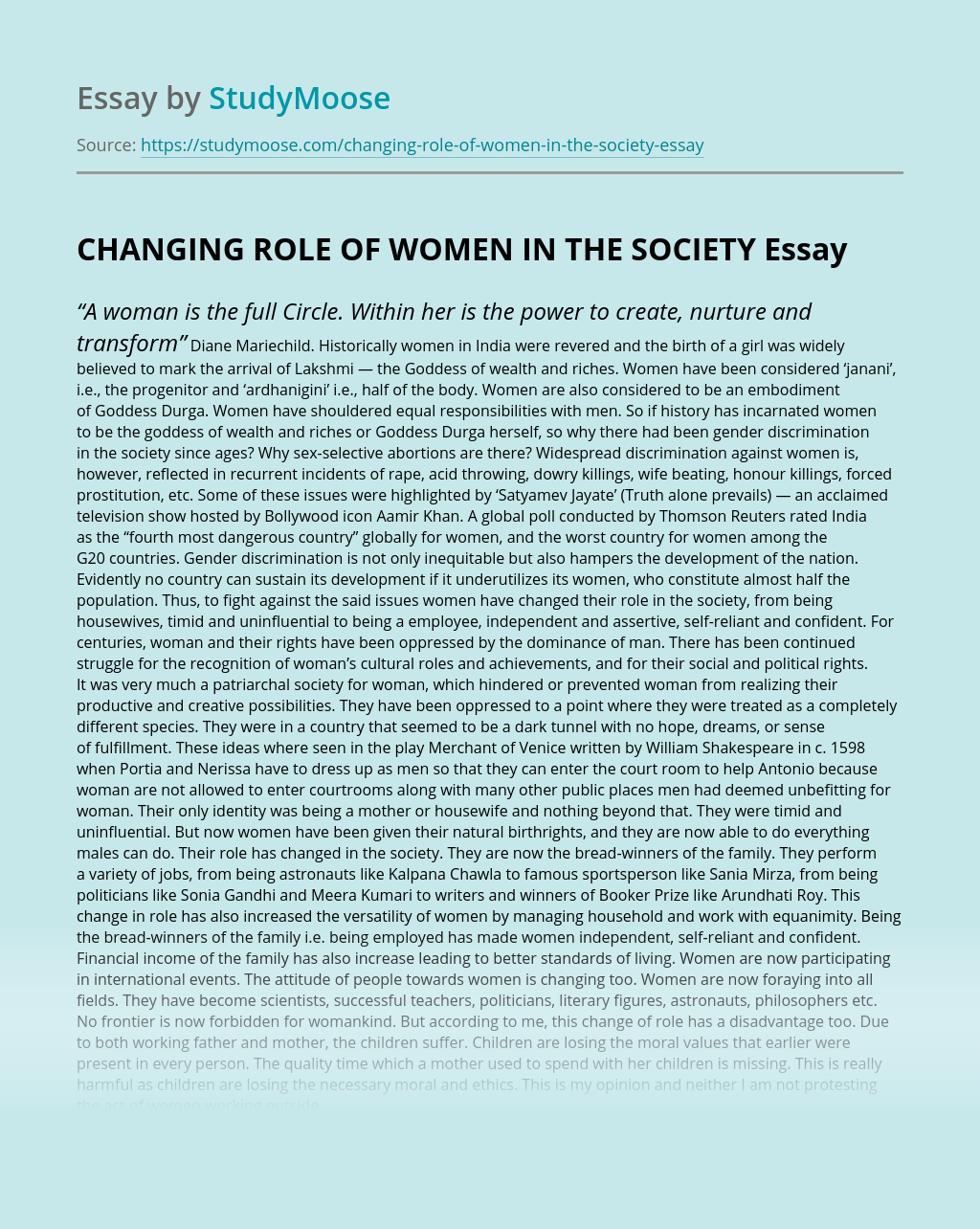 A practice is said to be inclusive when a setting make everyone feel welcomed and gives all children in their care equal opportunity to achieve the highest of standards. This can be done or achieved when the various needs and diverse lifestyle of children and their families are factored into the settings planning, be it...

The distribution of reward or penalty

Sociologists often follow (Merton 1972, p. 20) in defining discrimination as the treatment of a functionally relevant status (such as race or sex) as relevant for the distribution of some reward or penalty. While legal standards of discrimination have changed since the passage of Title VII (Blumrosem, 1993, p. 110), legal scholars theoretically concur that...

Get Essay
Stereotyping, Discrimination and Prejudice in the Media

The movie that I have chosen to watch for this particular bonus assignment is called “The Freedom Writers”. The movie is about a new teacher and the challenges that she faces in order to make the students in her English class, who come from different ethnics backgrounds and who most hate each other, get along....

Discuss issues of equality and variety and ways to promote addition with your students. Review other points of recommendation available to satisfy the potential needs of learners. Acknowledging the trainee’s requirements and goals whilst respecting each individual trainee, providing them the proper aid and support when needed without favouritism or prejudice, will enable the trainee...

Unit 0.3 Outcome 1 Understand the importance of equality and inclusion 1a. What is meant by diversity The term ‘diversity’ means difference. Diversity recognises that though people have things in common with each other, they are also different and unique in many ways. Diversity is about recognising and valuing those differences. Diversity consists of visible...