Humans need entertainment in their daily lives For that reason we

Humans need entertainment in their daily lives. For that reason, we have tv shows, movies, video games, books, music, etc. Entertainment is terribly important for everyone because it gives them a break from all the outside world’s problems. Also, entertainment makes an individual people have a pleasurable and an enjoyable time; Entertainment can also help people bond because they talking about relationships, people will bond by having have common interests like watching a certain type of movie, etc.. However, back then in the ancient times, they did not have internet so, no to Nnetflix.

Don't use plagiarized sources. Get your custom essay on
“ Humans need entertainment in their daily lives For that reason we ”
Get custom paper
NEW! smart matching with writer

So, how would the ancient people, especially the greeks, would entertain themselves? Or was it more than entertainment?

Well, the Ggreeks started the Oolympic games to entertain themselves, but also to praise Zeus. If you have noticed, until now Now we have one of the biggest events called as the “Olympic Games”. Today, sport players from all around the world come after training ed for years to win that gold medal.

By winning, the player and the country from where the player is, will get a majyor recognition and have pride in his accomplishment. The location of the Oolympics would normally be in an enormous stadium, where the audience can watch while comfortably sitting. Now, sSome would eat and enjoy it with the whole family. When the players compete with each other or individually, there are always ambulances waiting in caseif an accident happens.

Meanwhile, It was not quite the same forto the ancient Ggreeks. Sport players would competed to win not to win a golden metal, but a crown made of flowers.

The location of the Olympics was where on in Olympia. certain places like They would kill each other to win, but. But it was not a gold metal, it was for a crown made of flowers. The location of the Oolympics would be close to the sanctuary of Zeus. This had no sealing to cover the sun and no seatssits for this the audiences. Also, there were different rules in participating. First, you had to swear in your oath that you would not cheat. However, participants would end up killing one another.

As I mentioned before, many aspects haves changed as time passed. However, the basic games of the Oolympics are still similar. For example, we still preserve , running, jumping, pentathlon, boxing, wrestling, etc. In addition, different and new types of sports are added to the Oolympics. Some common characteristics that the Oolympics had back then and today is that thousands of people would come from all places to watch the game. In the ancient world, Ggreek families would walk for days or even weeks to get to the Oolympics. Now a days, we have airplanes that only take a minimum amount of time to travel, thank God.

In conclusion, the Ggreeks had an excessive amount of violence while doing the games. On In the other hand, today’s Oolympics are mostly pacific and safety. I found many different and similar aspects about the olympics which helped me to realize many points. One of them is that, humans tend to improve and preserve ancient materia l to reuse it. In this project,By ending this project I have learned that people obligatorily need entertainment to live and enjoy life. Also, I learned that humans take knowledge or concepts from the past and make it repeat it. So, I think we have to be careful abouton what we repeat in on history

Humans need entertainment in their daily lives For that reason we. (2019, Dec 11). Retrieved from http://studymoose.com/humans-need-entertainment-in-their-daily-lives-for-that-reason-we-example-essay 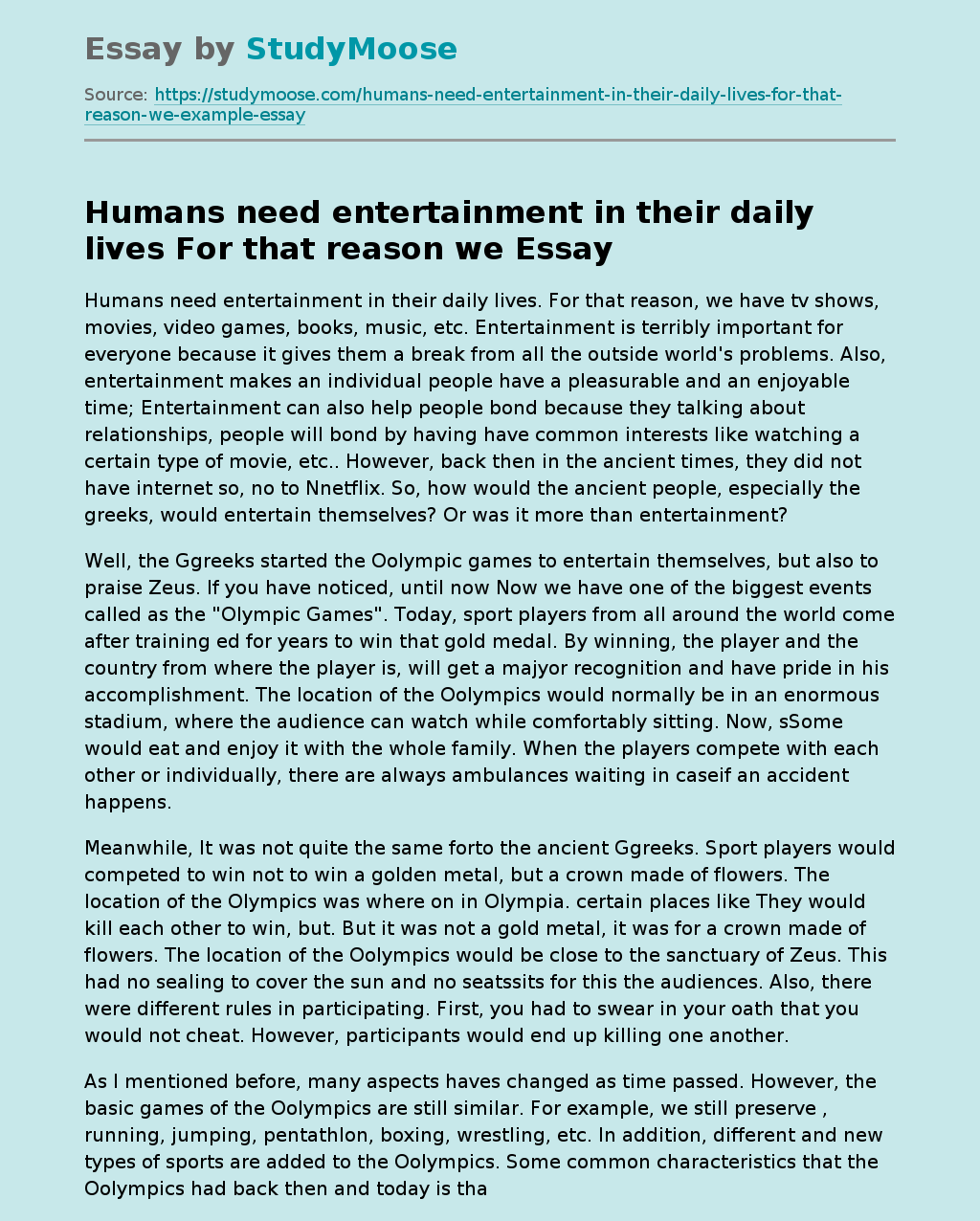