Human Race According to Out of Africa Theory

The Out of Africa Theory is a widely renown theory describing the origin of the human race and their early dispersal throughout the world. According to this theory, humans have a monogensis, or a single and common origin; Africa. The concept was first introduced in 1871 by Charles Darwin but was deliberated for years until further studies of mitochondrial DNA and evidence ”based on physical anthropology of archaic specimens” was added. During the early 19th century, scientists, archeologist and other scholars, speculated, studied and disagreed about the development of humans and our origins.

Don't use plagiarized sources. Get your custom essay on
“ Human Race According to Out of Africa Theory ”
Get custom paper
NEW! smart matching with writer

Some experts theorized that humans are monogenism and developed into various varieties of species. Others argue that we are a polygenism mammal and that we either had separate development of various human species or developed as separate species through ”transmutation” of apes. It was until the year 1871 when one of the first theories had been proposed openly. During that year, Charles Darwin published the book ”Descent of Man”, in which he suggested that all humans were descendant from early humans who lived in Africa based on his studies of the behavior of African apes.

In his book, Charles Darwin concluded, ”In each great region of the world the living mammals are closely related to the extinct species of the same region. It is, therefore, probable that Africa was formerly inhabited by extinct apes closely allied to the gorilla and chimpanzee; and as these two species are now man’s nearest allies, it is somewhat more probable that our early progenitors lived on the African continent than elsewhere.

But it is useless to speculate on this subject, for an ape nearly as large as a man, namely the Drypithecus of Lartet, which was closely allied to the anthropomorphous Hylobates, existed in Europe during the Upper Miocene period; and since so remote a period the earth has certainly undergone many great revolutions, and there has been ample time for migration on the largest scale. ” Unfortunately, it wasn’t until 50 years later when other scholars began to support Charles Darwin’s theory when an sufficient number of fossils of early humans in several areas of Africa was found.

During the 1980s, three specialists, Allan Wilson, Rebecca Cann and Mark Stoneking, worked together on another theory that supports Charles Darwin’s speculation, the “Mitochondrial Eve” hypothesis. In these tests, the scientists solemnly focused on mitochondrial DNA, human genes that lay within the cell and are passed from mother to child. These genes allow mutation, as they mutate quickly for adaptation, thus allowing those studying to find and track changes during short time periods.

By focusing on these genes and comparing their differences, the three scientists were able to create a hypothesis about the time and place when modern humans began to evolve. According to their findings, they believe that modern humans are decentants from a single population, while earlier humans e. g. Neandertals and Homo erectus, had become extinct. Furthermore, the team compared the DNA of numerous people of differerent ethnic backgrounds and concluded that all humans did indeed evolve from ‘one mother’ in Africa about 150,000 years ago.

According to physical evidence, and theories, scholars have concluded upon a whole hypothesis. Based on their knowledge and belief, modern humans diverged from Homo sapiens between 200,000 and 150,000 years ago specifically in Africa, that between 125,000 and 60,000 years ago members of Homo sapiens left Africa, and that these humans species gradually replaced earlier human populations. East Africa has been the single and specific orgin of the human race that most scientists have conluded on.

There are still speculations and debates on whether there had been one single dissolution or several. Due to genetic, linguisitc and archaeological findings, the Southern Dispersal theory, a theory in which included several exodus, has become the most favorable theory, however many researchers are gradually considering the first and original haven was Northern Africa. Scientists believe the population of early humans had been around 2,000 to 5,000 while they persisted in Africa, and only small groups of persumably 150 to 1,000 migrated out towards the Red Sea.

These few individuals went out to expand and eventually populate the rest of the world. For example, one theory suggests that those who traveled along the southern coastline of Asia ultimately crossed the sea and colonized in Australia about 50,000 years ago. Other researchers believe and have proposed to a multiple dispersal theory in which states that there had been two major migrations out of Africa. According to this speculation, one group crossed the Red Sea and traveled along the coastline until reaching India.

The other, meanwhile, migrated north, following the Nile River, and crossed into Asia through the Sinai. From there, several members dispersed in various directions, some headed towards Europe while other went east into Asia. It is unclear, however, if Homo sapiens migrated to North America 30,000 years ago, or later around 14,000 years ago. From there on, Homo sapiens gradually and continiously migrated and settled on to every continent, except Antartica, and gradually began to increase and populate the world.

Human Race According to Out of Africa Theory. (2016, Sep 15). Retrieved from https://studymoose.com/human-race-according-to-out-of-africa-theory-essay 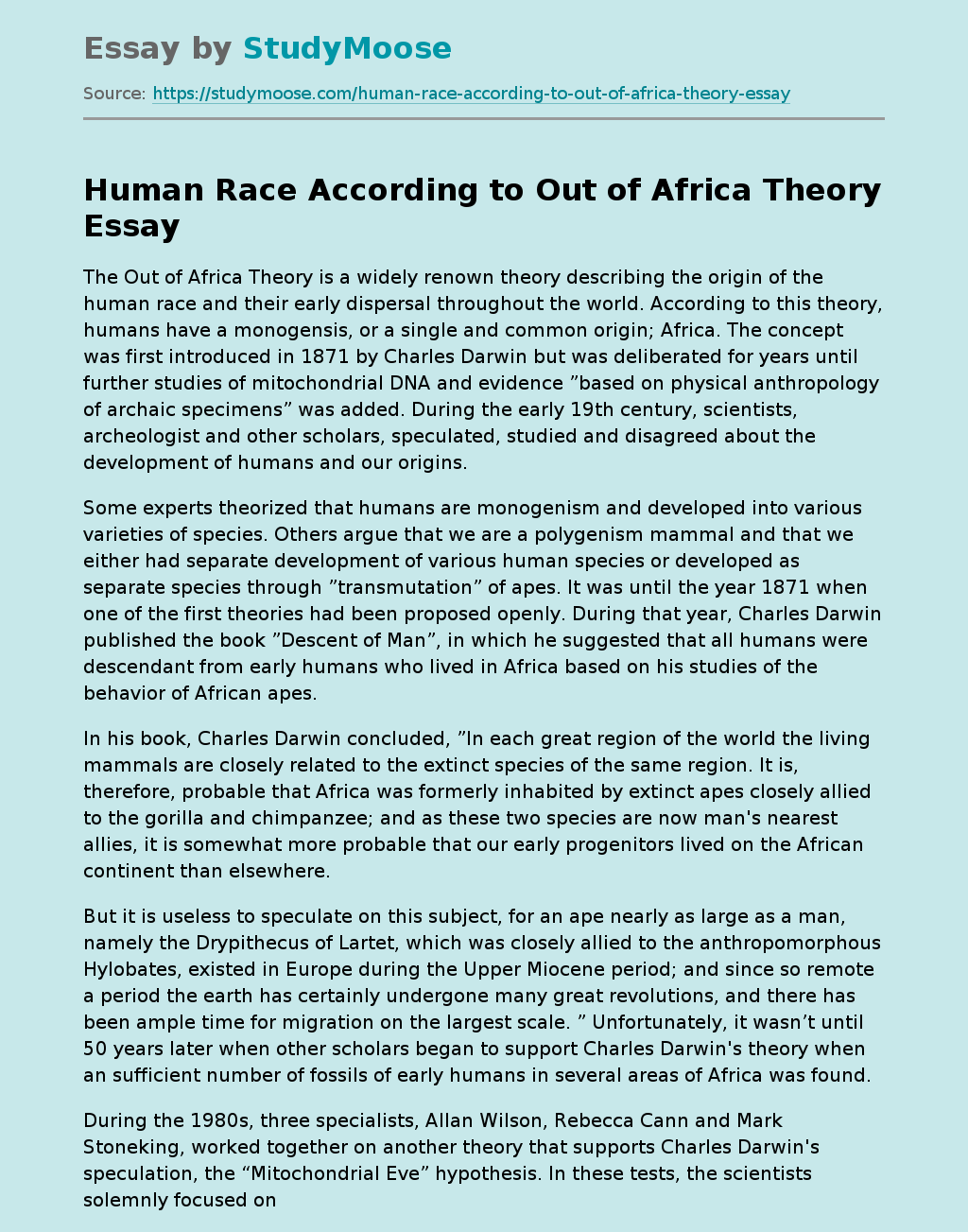