In its simplest definition, freedom is the condition of being free from restraints. This condition can be experienced by any living things most especially humans. However, in the complexity of human rationality and mobility, freedom takes deeper meanings and perception depending on human condition and circumstances. The definition of human freedom ranges from philosophical to theological discussions and their translation into day to day experiences. Freedom is the ability of an individual to move freely, to act, to decide, to believe what he or she wants and to freely shape his or her existence without restraints or limitations.

Don't use plagiarized sources.
Get Your Custom Essay on Human Freedom Just from $13,9/Page

But in the context of culture, there has been no absolute freedom. Since time immemorial there has been limitations and boundaries created for humans not to fully exercise their freedom of being. Moreover, these boundaries leave the individual into facing the consequences of each action, decision or belief being made. The fact that we are governed by institutions and that there are strata in the society limits individuals exercise of freedom.

On the other hand, the exercise of human freedom is not solely of the individual.

There are many circumstances when freedom becomes of the community or society exercising it together at a given time. Though there are the so-called personal choices that individuals make on their own capacity to think and decide, more often than not, the result involves some people or a large scale community. The concept of freedom is often illustrated with being in jail or immobility. However, the “unfreedom” is more than the presence of structural restraints and limitations. Most of the time, the opposite of freedom is demonstrated in the level culture and the inability to access services provided by the society or government.

Human Unfreedom For individuals to fully understand the concept of freedom, we must first understand the avenues where unfreedom is experienced. According to G. C. Berkouwer, “This ‘unfreedom’ is so evident and frequent in the history of mankind that we must all the impressed by it, by the impressive evidence of dictatorships, deportations, and all sorts of destruction of freedom; and besides, an individual may feel his freedom cramped by physical or psychical weakness, which hinders expression of man’s full nature. ” Prior to dictatorships, culture is one of the primary restraints of freedom.

For example, it is cultural that some parents chose the life path of their children. They direct them into what they want these children to become into the future thus hindering the development of individuality and exercising their own talents and gifts in the ways they see them fit their future. Laws, as part of culture, are undeniably limiting the exercise of freedom. Whether it’s logical to cross the street in the nearest possible point, the lawful is to cross using pedestrian lanes or footbridges or else suffer the consequences of being fined or imprisoned.

Many people actually regard cultural norms and laws as restraints to the exercise of freedom and curtail their ability to explore what they want in shaping their lives and future. Many people take the risk of deviating from these regulations and boundaries to show an accomplishment in fostering their capability to think for themselves. The risk, however, involves other people in the community to serve as witnesses or critiques, moreover, individuals who diverted will suffer humiliation.

The inability to access primary services and needs like clothing, shelter, food, health care and education also restricts the individuals’ or community’s exercise of freedom. When people, families or communities are denied of these basic rights, the freedom to act is also being restricted and denied. Food, shelter and clothing uplifts dignity to an individual. In a society where people are often judged by what they eat, wear or where they live, these needs should be supplied for an individual to exercise the freedom to be a part of a community whether of religious or secular.

The denial or inaccessibility of quality education also threatens the exercise of freedom in many different ways. For example, people are classified according to their educational attainment or even to the schools or universities where they studied. Whether or not some individuals are qualified to a job post, they are judged according to how they dress or compose themselves and to the kind of community they come from. Fostering Freedom Given all the definitions above, there are still ways for individuals to fully exercise and foster their freedom of being and existence.

Considering that limitations and restraints are already existing in any given form, be it cultural, social or governmental, the best way is to make freedom valuable and co-existent with the former. Following cultural norms could actually make an individual fully aware of his or her freedom of choice. It is a choice between social suffering and the freedom to be his- or herself amid restrictions. Following laws is best form of the exercise of freedom than being penalized as a consequence of disobeying. Freedom is being able to choose what it right at the right time and at the right place.

For the children, older generation should allow them to exercise their freedom by teaching them the consequences of the opposite while enabling them to fully discover who they are in the process. Should parents be frustrated to what they have become, they should not turn to their children to fulfill to what they have not become; rather allow them to choose the life they want whenever they are already capable of doing so. Reference G. C. Berkouwer. (1962). Man: The Image of God. Eerdmans: Grand Rapids, Mississippi. Retrieved April 9, 2009 from http://www. the-highway. com/freedom1_Berkouwer. html 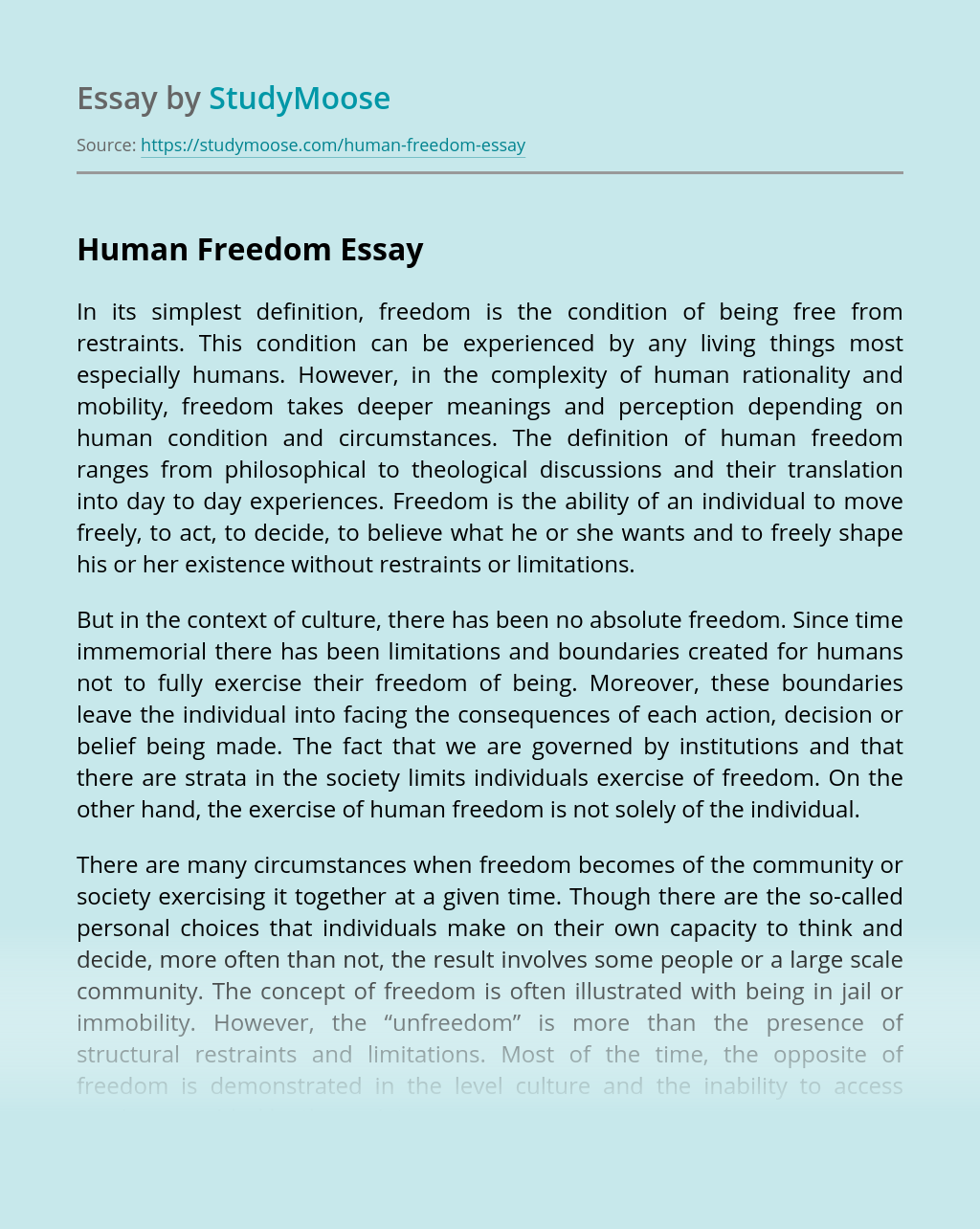 Jacques Cartier was born in St. Malo, France on December 31st in 1491 and died there also on September 1st 1556 when he was 65 years old. The name of his home was Limoelou. He married Mary Catherine des Granches in 1520. He was a respectable sailor and had travelled to South America and mainly...

All HRM Students have their OJT’s in different restaurants, we were assigned in Stad. We started on April 27, 2012. I together with Rhems Tugas, Andrea Sagmit, Kaydee Gracia, Jerica Sarondo. We were oriented but in the middle of last April. I started the OJT in Stad is quite enjoying but the staff are so...

Get Essay
Roles of School Counselors

Abstract This paper will outline the roles of professional school counselors in the United States. A school counselor serves several important roles in the schools, including that of leadership, community outreach, and psychological support to students. They face a variety of unique legal and ethical issues that come from being in settings with hundreds of...

Has the Role of the Prime Minister Become More Presidential?

AS Politics – Homework Has the role of the Prime Minister become more presidential? There is an argument that the Prime Minister dominates in the British Political system. The British traditional system has moved away from the “cabinet government” model to a “prime ministerial government” model. But there is a different question concerning about the...

In class out of the three essays we read I choose to do a compare-contrast between Ralph Waldo Emerson’s and Joyce Carol Oates’s essays. I choose these two because they both had different feels towards nature. Oates is against nature and Emerson is about becoming one with nature. Even though both have different meaning, both...