Firstly, we can see from the graph that the data plotted (density and average temperature change) is a discrete set of data. This due to the fact that each point on the graph comes from a different source within the investigation (i.e.: different liquids will have different densities) Of the five substances tested, sunflower oil has the lowest density. This is correct intuitively because as we know, when oil is put into a mixture of water, not only does it not mix with the water, but it does not sink is well.

Don't use plagiarized sources. Get your custom essay on
“ Human error ”
Get custom paper
NEW! smart matching with writer

Also, I think the densities of Pepsi and milk should be slightly higher than that of water, such as 1.03 g/cm3. The salt solution has the highest density (1.18 g/cm3). This makes sense because it is regular water (with a hypothesized density of 1 g/cm3), with 30g of salt added, thereby significantly increasing the density. These factors and variations have affected my trend line and thus the confirmation of my hypothesis.

Looking at my polynomial trend line, the point that sticks out the most is milk, whose point is quite lower than the trend line.

This makes sense because milk is relatively “thick”, so it would not heat up as quickly as other liquids as compared to its density. The lowest average temperature change compared to density is salt water, which also makes sense because of the 30 g of added salt into the water. This salt prevents the water from heating at a normal rate, and also increases the density. It takes more time for the particles in the salt solution to gain energy and velocity and thus increase the thermal energy. Therefore, it is logical that this is the “lowest” point on the graph.

From the downwards, negatively sloping gradient, we can see that an increase in the density of the substances tested lowers the temperature change after two minutes. However, I am doubtful that the trend line formed by Microsoft Excel that the relationship between density and temperature change is polynomial. Thus we can see that the trend line has a line equation of y= 1.764×2-3.967x+2.408 with a R2 value of 0.875. Even though a polynomial trend line best represents the Raw Data, I would have expected a linear trend line. This might be due to my human error (?0.3) for temperature change and time and the electronic apparatus error (Logger Pro) (?0.3). This will be further on analyzed and examined in my Limitations sections and be taken into account in my conclusions and the planning of further investigations.

In conclusion, even though my data might suffer from large inaccuracies and miscalculations, my hypothesis has proved to be correct as the relation between a liquid’s density and its heating rate is inversely proportional. A liquid with a greater density will have larger heat capacity to overcome and thus a lower heating rate. Throughout my investigation, I was able to notice several error or limitations that made my conclusions and analysis somewhat implausible.

These limitations included my human (?0.3?C) and electrical/technical error (?0.3?C) in the recording of my data, the Logger Pro thermometer and recording device, the glass beakers used to contain the liquid, the Bunsen burner, the complicated set up of my experiment and the lack of more trial runs. In addition, the density of the liquids/substances used were somewhat too similar as I only chose common liquids that can be found in a normal household. All of these limitations mentioned below would have to be taken into account for further investigations.

I have empirically estimated a 0.3C human error. My estimate comes from both prior experience and also because of my slow human reaction time starting and stopping the Logger Pro application and turning off the Bunsen burner, which led to inconsistent results. My human reaction time and speed is also due to my perception of when the time finished (120 seconds) as I have bad eyesight I might have went overtime or stopped the application Logger Pro too soon. The factor that mainly affected my human reaction speed was also the independent factor of my experiment as it increased I had to move my hand quicker to stop the timer.

I have also estimated a ?0.3?C electronic error. The Logger Pro thermometer is extremely heat sensitive and shuts off from excessive heat. This sensitivity leads to fluctuations and inaccuracies in the graph plot when using Logger Pro. Another factor that contributed to the inaccuracies of Logger Pro is that it calculated the temperature using only two decimal places and time was only recorded in seconds. However, Logger Pro does give me the advantage of calculating the temperature per unit time in real time and then graphing the results instantly. For further experimentation, I could use a hand held digital thermometer for verification the devices used in this investigation are particularly heat sensitive.

I used a Bunsen burner as my heat source. This is a very primitive, rudimentary and inaccurate device. It does not output a consistent heat per unit time. I should have used a calorimeter instead, because it is much more accurate and insulated. However, my time was limited and henceforth the Bunsen burner was my only option. Since my experiment and trial runs took course over several days and I was careless, I had no way of controlling the fact that the Bunsen burner, stand and heating rate would be the same over the course of my investigation.

Each piece of equipment even though similar and of industrial make might have default that another might not have. Furthermore, there was no way of controlling the heating output of the Bunsen burner. All these inconsistencies and carelessness lead to an exuberant apparatus/technical error of ?0.3?C for each trial run and liquid tested. Moreover, a Bunsen burner lets some heat escape, leading to further inaccuracies, whereas a calorimeter is isolated and a controlled environment with no possible outside factors influencing my results. Therefore, a calorimeter would my a viable option for further experimentation.

In the set up of my experimentation, I used a clamp stand to hold the substance vertically over the heat source (Bunsen burner). This is both a complicated and inaccurate setup, leading to a higher degree of error. The glass beaker I used is also not ideal. Glass is very malleable under intense heat and could crack or break possibly leading to injuries. Thus for further investigation the use of a calorimeter (made from plastic or any other insulated material) would be a more viable option for more accurate results, analysis and conclusion.

Finally, to further reduce error in my analysis, I should have completed 5 trials instead of 3 for each of substance. Also, I should have let each trial run for 3 minutes instead of 2, to more accurately measure the change in slope over time and write a more comprehensive and detailed analysis. These controlled variable would be needed to take into account in further investigation. The density of the substances used are too similar, especially those of water and Pepsi. I should have chosen liquids with a larger density range for the experiment to be conclusive.

Further research should have been done, on which liquids to employ for the expirement. However, in further experimentation I could look up the densities for each of the substances used in order to ensure that my investigation and analysis is conclusive and accurate. Taking these errors into account, I may have been able to improve on them in a number of ways in order to further support my conclusion, or even disprove it. 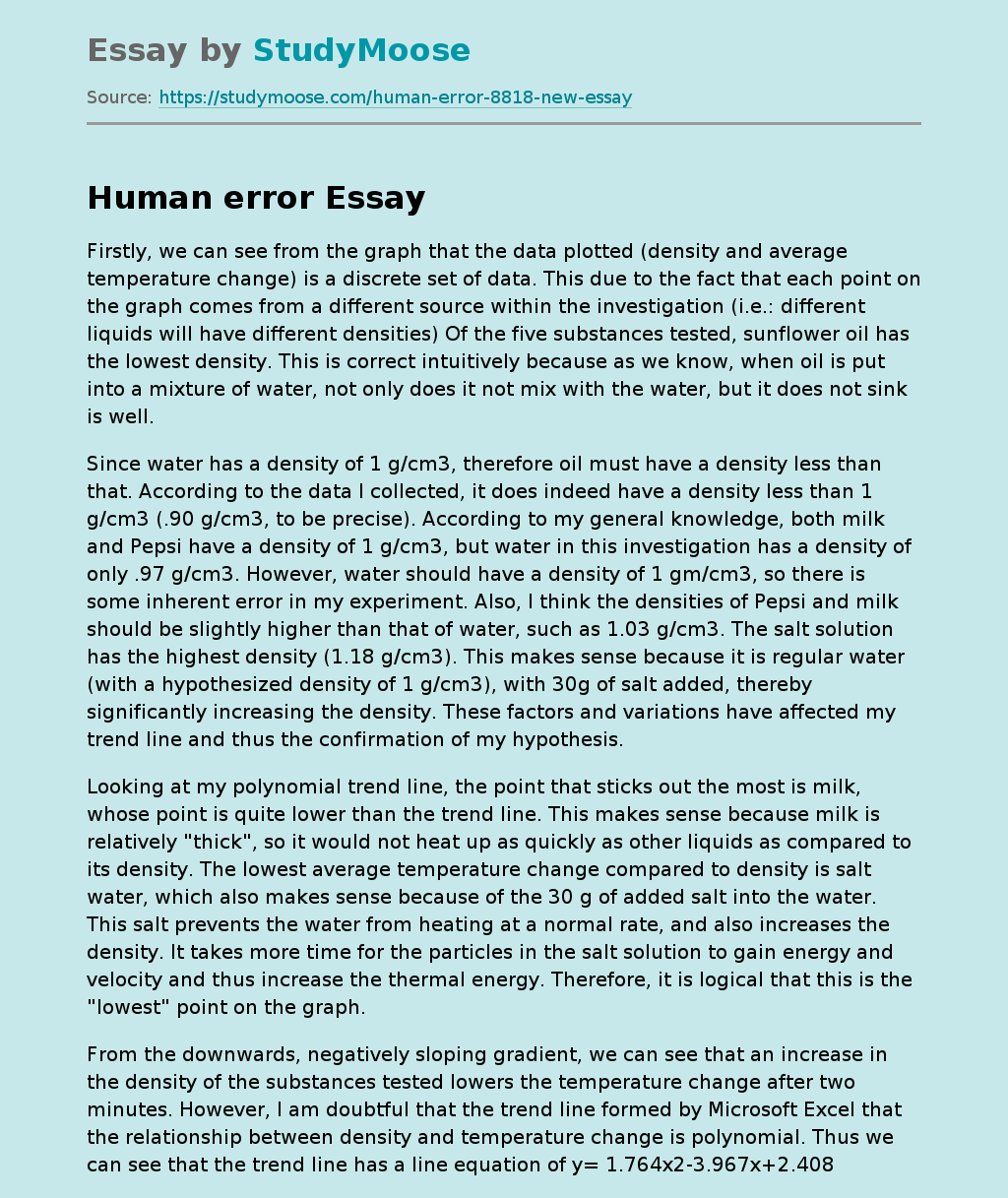