How The Internet has Affected the Music Industry?

When Tim-Berners Lee dreamt up the, then, crazy idea, of an inter-global network, I’m sure very few people had the same optimism in believing that it could happen in the future.

Over the last ten years, the Internet has evolved from just web pages to e-mail, to online gaming, to viewing sport and film previews, and to buying and downloading music online. The Internet has now become one of the music industry’s greatest markets, estimated to reach over 25% of sales in five years.

Don't use plagiarized sources. Get your custom essay on
“ How The Internet has Affected the Music Industry? ”
Get custom paper
NEW! smart matching with writer

This may be true, yet the Internet is also one of the music industries greatest enemies.

For some years now online shopping has been available to anyone with a credit card and an Internet connection. E-commerce retailers such as Amazon.com sell everything from garden tools, to C.D’s and mini-discs. It is only in the last couple years however, that online shopping has taken off. Before this the public and businesses alike had not been taking full advantage of this phenomenal asset, which has been proven to save companies millions.

It was only with the creation of Windows 98 and other Internet programs that people were sure that their credit card numbers and personal details could not be viewed by another person, or ‘hacked’. Once this huge hurdle was overcome, the way we used the Internet and the effect it had on the music industry had changed forever.

The close relationship between the Internet and the music industry has led to many dramatic revolutions. First of all it has changed the way in which we purchase music.

It has also opened up a new medium for record companies and musicians to promote their music, and now consumers can listen to music via technology such as RealAudio. Also, with peoples Internet connections getting faster all the time, and now with the invention broadband Internet, you can listen to music through Internet Radio Stations whilst still surfing the Internet, a new technique called ‘streaming’.

From a consumers point of view this is all excellent news, and I am sure there is yet more to come. But from the music industry’s perspective, not all of this new technology is helping their cause. Many areas of the music industry have been affected in a bad way, areas such as musicians and record companies worry about copyrights, songwriters and music publishers also worry about copyrights, and distributors and high street retailers worry about sales, and they should be worried as C.D shipments went down by 7% in the first six months of 2002. Copyrights are based on control of the market: how and when a copyright work is used. So the Internet has changed the foundations of the music industry.

Because it is so easy and inexpensive to create a website, this makes it easy to put someone’s copyrighted work on to your website and the Internet, therefore making it available for anyone to listen to or copy. As many consumers will still download this copyrighted music for free it is obvious that they do not believe that copyrights stand for much. This is all part of a much larger problem, controlling the distribution of copyrighted music on the Internet, a task that surely is near impossible with so many websites committing copyright fraud.

The most famous example of copyright fraud occurred on June 1, 1999. With Microsoft’s supreme dominance over the computing industry and the Internet, not many other companies get a look in. In the end it took a first year university student called Shawn Fanning with the help of funding from his uncle to disrupt the balance of power. It was with the creation of an MP3 website called Napster that the public really took to downloading music from the Internet. Up until the formation of Napster, the technology had been available but had not really made it into the mainstream. You might say that it was Napster that revolutionised the way we obtain music from the Internet, not the new technology.

There was however, one fatal flaw with this website. All the music that was being ‘shared’, had copyright to its name, and Napster was using these songs without paying the record companies. So on December 7, 1999, The Recording Industry Association of America sued Napster for copyright infringement. They were asking for damages of $100,000 each time a song was copied. This however did not stop Napster operating as normal, it was only when they were sued by the hugely popular rock band Metallica that Napster was prompted to take action, or at least look like they were taking action. It was on October 31, 2000 that Napster announced a new partnership with Bertelsmann-RCA in which Bertelsmann put £26,000,000 into Napster to keep it going. Then on July 26, 2001 a federal judge ordered to shut down Napster, but the music industry’s elation did not last long, just two days later it was up and running again.

Now Napster is working together with major record companies EMI, Sony Music Entertainment and Universal to develop a system where consumers using the service will pay per song or a monthly subscription fee. This is a new system, which will attempt to benefit everyone.

So despite the early indications that all this technology would go to waste, Microsoft, the record companies and Internet companies seem to have sorted themselves out. The Internet may have once been a huge enemy for the music industry, but it seems like the Internet is now on its way to having an extremely positive affect on the music industry.

How The Internet has Affected the Music Industry?. (2016, Jun 21). Retrieved from http://studymoose.com/how-the-internet-has-affected-the-music-industry-essay 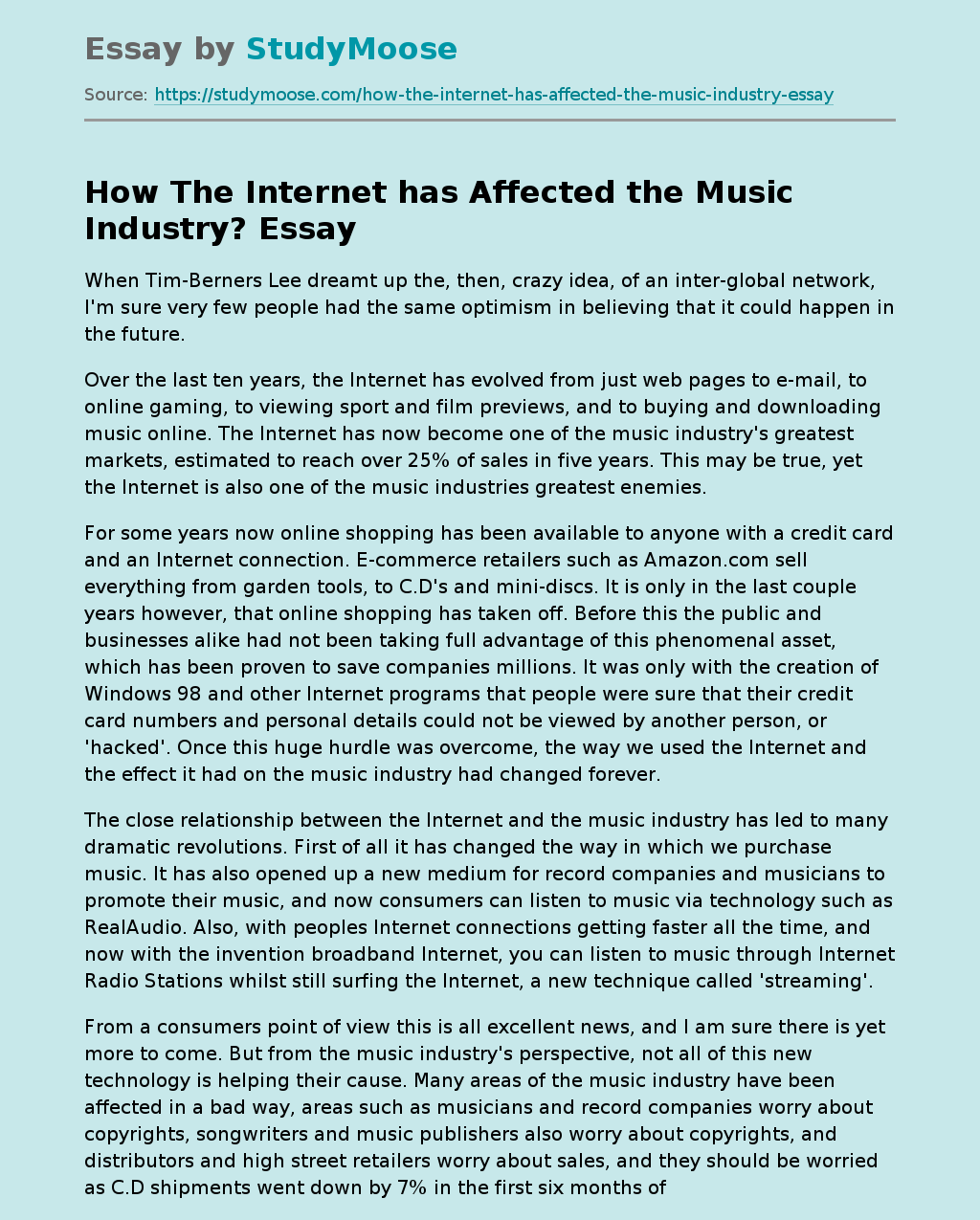