How the Constitution Stops Tyranny?

The Constitution was created in such a way that it guards against tyranny. Tyranny is harsh, absolute power in the hands of one individual or a few people such as a king or dictator. The Founding Fathers were determined to not let their new country become a tyranny like the King George III was.

The U.S. government has 3 branches: the executive, legislative, and judicial. This is so that not one person in a branch can have all of the power.

Don't use plagiarized sources. Get your custom essay on
“ How the Constitution Stops Tyranny? ”
Get custom paper
NEW! smart matching with writer

The branches’ power is distributed evenly across all three branches.

Tyranny can come in different forms. For example, there can be tyranny of large states over small states. Since in the House of Representatives the amount of representatives is based on population, New York could easily win a vote over a smaller state such as Rhode Island since they have more people. However, since the Senate has 2 members per state, it is fair and equal because every state has a voice.

Another type of tyranny, tyranny of the president over the judicial branch, is more complicated. If the President could fire Supreme Court justices due to ruling she or he didn’t like, that would be tyranny. The justices would be biased in their rulings to keep their job. The last type of tyranny is tyranny of the Chief Executive. For example, if the legislative branch did not exist, the President would be able to make laws that may not be good for the American people.

In Article 1, Section 2, Clause 3 of the Constitution, it says, “Representatives shall be apportioned according to population.

The number of representatives shall not exceed one for every thirty thousand, but each state should have at least one representative…” In Article 1, Section 3, Clause 1 of the Constitution, it says, “The Senate of the United States shall be composed of two senators from each state chosen by the legislatures thereof for six years; and each senator shall have one vote.” This shows that there is equality in the legislative branch of the government. Every state, especially the small ones, would be content with their representation in the Senate since there is an equal amount of votes per state. This small state – large state compromise guards against tyranny because large states can get their way in the House of Representatives, but smaller state have a say in the Senate.

When James Madison wrote the Federalist Paper #47, he said, “The accumulation of all powers, legislative, executive, and judiciary, in the same hands, whether of one, a few, or many, and whether hereditary, self-appointed, or elective, may justly be pronounced the very definition of tyranny…Liberty requires that the three great departments of power should be separate and distinct.” Madison means that the three departments of power are separated so that there is not a tyranny. Madison says that it is not possible to have tyranny in a democracy. This is because the power is divided evenly amongst the three branches and someone can only serve in one branch at a time.

How the Constitution Stops Tyranny?. (2020, Sep 05). Retrieved from https://studymoose.com/how-the-constitution-stops-tyranny-essay 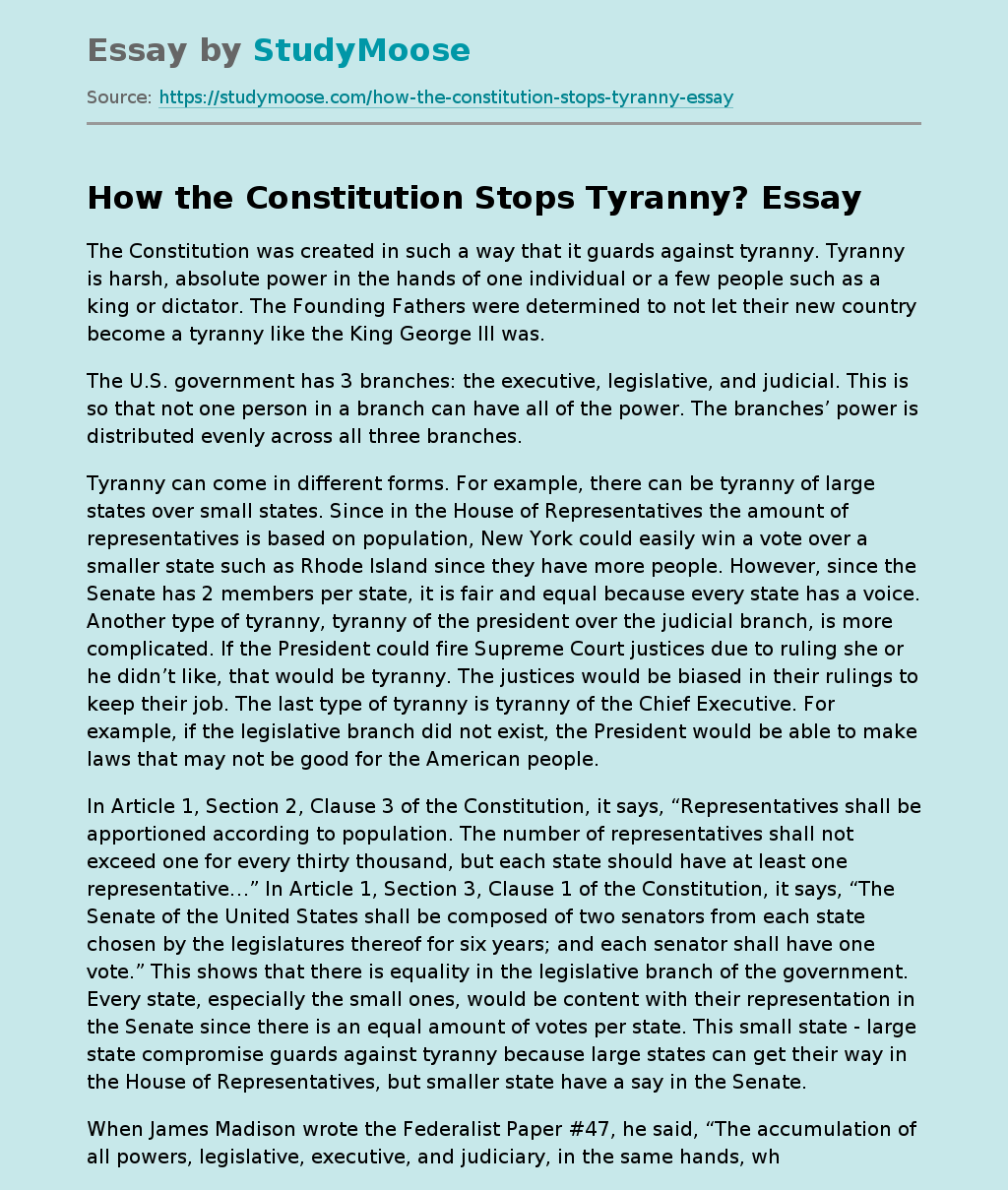