How reliable are the narrators in the novella Heart of Darkness by Joseph Conrad and the fiction novel Great Expectations of Charles Dickens?

A reliable narrator is one who is factual, trustworthy, and competent in relating the story. Generally, there are two types of narrators. The first person narrator focuses in-depth on only one character, which could be his or her character, and the impact of other characters on this sole character. Third person narrators provide a comprehensive picture of the different characters and the situations unfolding in the story.

While third party narrators receive greater regard for reliability due to omniscience, a first or third person narrator could be reliable or unreliable depending on the character of the narrator and the intention of the novel.

Don't use plagiarized sources. Get your custom essay on
“ How reliable are the narrators in the novella Heart of Darkness by Joseph Conrad and the fiction novel Great Expectations of Charles Dickens? ”
Get custom paper
NEW! smart matching with writer

The novel Heart of Darkness by Joseph Conrad is a frame narration, which means the story lies within a story. To achieve this end, there are two narrators. The first narrator is unknown and provides an introduction of the character of the second narrator, Charlie Marlow.

The narration describes Marlow as having deep-set cheeks and yellowish complexion but straight-backed indicating he is not heavily built but not frail either.

The unknown narrator, by representing the views of the other people on board the ship in describing Marlow as non-conventional or atypical because of his tendency to weave stories and recount tales introspectively, expresses the reliability of his assessment of Marlow. This puts into question the factual manner of Marlow’s narration.

In Marlow’s accounts of his trip along the Congo River to fetch Kurtz, an ivory trader trapped in an African village, the focus is more of his interpretation of people and events without much recount of who these people are and the context of the situation.

Marlow is clearly against colonialism but do not recount in detail the situation in Africa that makes colonialism repulsive to him and what are the solutions. The trustworthiness of Marlow as a narrator is not clear-cut. Marlow is a decent person but his actions do not always reflect his views.

He is against the exploitative nature of the colonial explorers in Africa and feels burdened by the situation but his character is complicit about the situation. He has limited interaction with the natives and does not express their views. Marlow is a competent narrator but only for himself. His accounts do not reflect the experiences and perspectives of the other people he talks about such as the villagers of the communities he visited or the colonial communities in Africa. In Great Expectations by Charles Dickens, the narrator is Pip, who is also the main character of the novel.

Pip’s narrative is factual because he tells not only about his good side such as helping people and becoming a gentleman but also of his bad side such as his mistaken impression about Magwich and his embarrassment of Joe’s uneducated ways. Pip is a protagonist in the novel, an orphaned but kindhearted boy, who although frightened to steal food for a thief, causing him guilt, and although yielding to the initial class-based prejudices wrought by society, ended up making things right. The nature of the character of Pip as trustworthy and sensible makes his accounts reliable. Pip is an eyewitness narrator.

The novel is a semi-biographical work, which means that Pip is telling his life story according to his own experiences and perspectives. This finds expression in some of the chapter titles such as ‘The Convict Frightens Me’, ‘I Execute My trust’, and ‘My State of Mind’. Pip is also the main character. This means that he is competent to narrate his story and the story of the people around him whom he witnessed. This makes his accounts reliable because of first hand experience and view. Although a first person narrator, the trustworthy character of Pip makes him a reliable storyteller of his own life and the life of the people around him.

How reliable are the narrators in the novella Heart of Darkness by Joseph Conrad and the fiction novel Great Expectations of Charles Dickens?. (2016, Sep 23). Retrieved from https://studymoose.com/how-reliable-are-the-narrators-in-the-novella-heart-of-darkness-by-joseph-conrad-and-the-fiction-novel-great-expectations-of-charles-dickens-essay 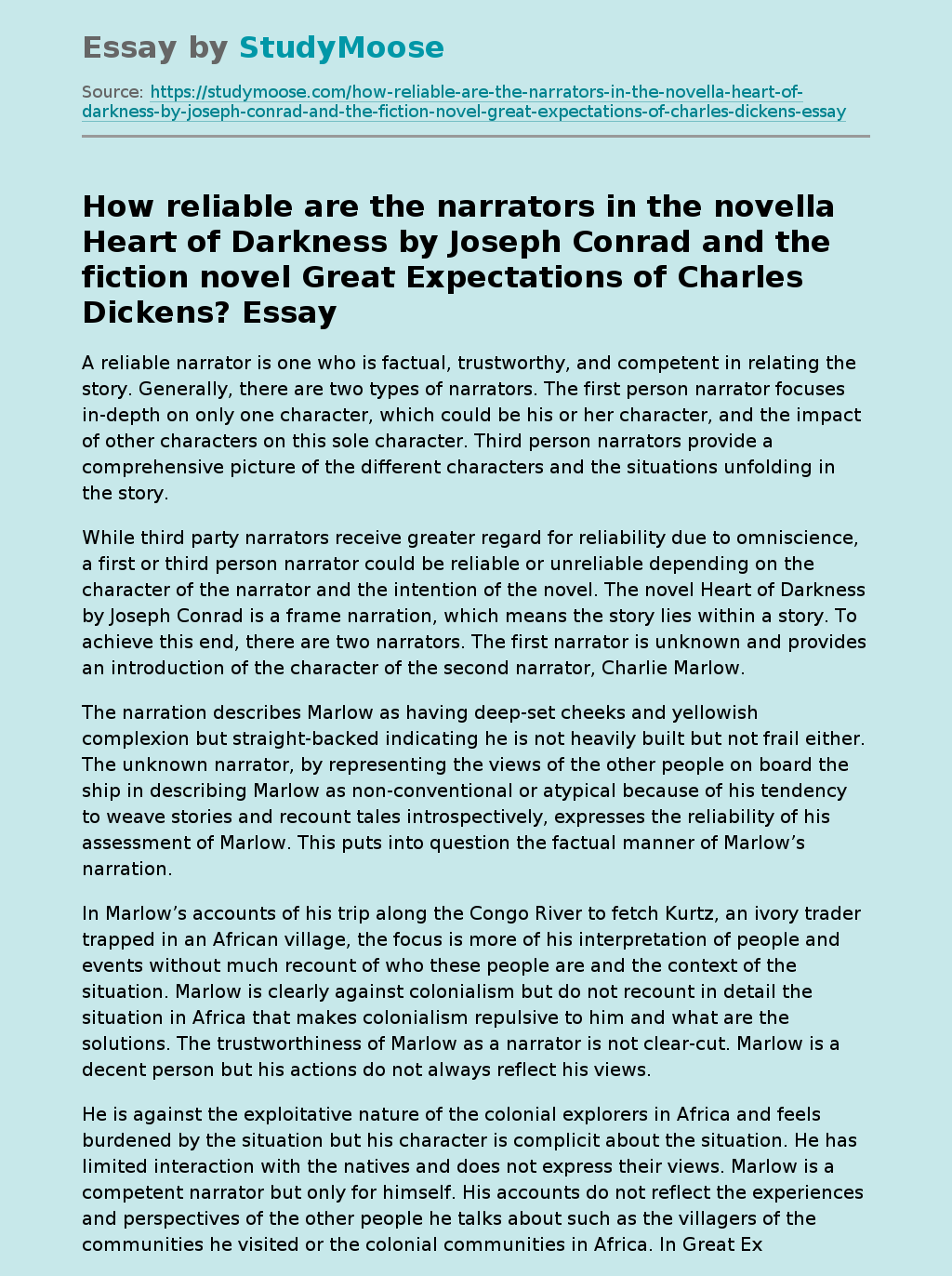