How Music Affects the Brain

Music: It’s been ingrained in our culture since the first instruments were made. It is such a large part of our society; we incorporate it into our daily lives through our phones, television, and media. Music stimulates the brain through the pleasure center and sends us waves of emotions and reactions. As a DJ, music is essential to my lifestyle. I’m constantly listening to different beats, tempos, and rhythms. Music rises and falls with the generation at that time.

The brain is the commander of our actions; it tells us what to do, say, act, and react. Music is in our anatomy. It fills our blood stream with the treble of the bass, drop of the beats, and fast tempos. The brain interprets music by releasing certain chemicals, affecting our personality, and improving our motor skills.

There are ten main parts of the brain that picks up music and interprets it for us. They are the corups callosum, motor cortex, prefrontal cortex, nucleus accumbens, amygdala, sensory cortex, auditory cortex, hippocampus, visual cortex, and the cerebellum.

“The four major parts in our brain that help us register music are, motor cortex, auditory cortex, nucleus accumbens, and the amygdala” (Cooper). The motor cortex is in charge of movement; foot tapping, dancing, and playing an instrument. The auditory cortex evaluates our first perception of the sounds and analysis of tones we are listening to.

The nucleus accumbens and amygdala are our emotional reactions to the music. All of these concepts in our brain send neurons to the body and we display either distaste or enjoyment when listening to music.

According to “Music Listening Releases Dopamine” which is a study conducted by researchers at McGill University in Canada. An initial 217 participants were narrowed down to 8 who consistently responded the same way when listening to music regardless of the listening environment (Moore). This proved that when listening to music our body releases a chemical called dopamine, which is a feel good pheromone. “Humans have the ability to obtain pleasure from more abstract stimuli, such as music and art, which are not directly essential for survival and cannot be considered to be secondary or conditioned reinforces. These stimuli have persisted through cultures and generations and are pre-eminent in most people’s lives” (Salimpoor).

Music not only affects us biologically but also on the outside. Our personality is a big façade of who we are. We put that act out there for the world to see, to be accepted and follow status quo. “Our emotions are affected by music, there are two kind of emotions: perceived emotions and felt emotions. This means that sometimes we can understand the emotions of a piece of music without actually feeling them, which explains why some of us find listening to sad music enjoyable, rather than depressing” (Cooper). “When you are listening to your favorite melodies and harmonies it can trigger the brain to release large amounts of dopamine, a chemical that sends “feel good” signals to the rest of the body and plays a role in both motivation and addiction” (Listening to Music Can Prompt the Brain to Send Positive Signals throughout the Body).

Professor Adrian North of Heriot-Watt University, Edinburgh, UK, has undertaken the largest study so far of musical tastes and personality type. “He is an expert on music psychology and has carried out extensive research on the social and applied psychology of music, in particular the relationship between pop music culture and deviant behavior in adolescence, music and consumer behavior, and the role of musical preference in everyday life”(Collingwood). Over the course of three years, Professor North asked more than 36,000 people in more than 60 countries to rate a wide range of musical styles in order of preference. Certain aspects of personality were also measured by questionnaire. “People do actually define themselves through music and relate to other people through it but we haven’t known in detail how music is connected to identity” (North). He believes that his results show why people can get defensive about what they like to listen to, as it is likely to be profoundly linked to their outlook on life. Since music is greatly incorporated into our society, it is easy to identify yourself with I’m this kind of genre, and we’re that way mentality.

By listening to only one kind of genre you are not exposing yourself to other types and not allowing yourself to have a new perspective on things. Also with music being in our everyday lives are it is especially important to be aware of what kind of music we are listening too. The choice of song you choose to relish in could make or break your day. Another important aspect of how music interacts with the brain, is how it improves our motor skills. By listening to music our neurons are registering the beats, tempos and rhythms; which gets us tapping our feet and swinging our hips to the rhythm of the beat. In 1911, an American researcher, Leonard Ayres, found that cyclists pedaled faster while listening to music than they did in silence. This study was done again in 2012 showed that cyclists who listened to music required 7% less oxygen to do the same work as those who cycled in silence. “This happens because listening to music can drown out our brain’s cries of fatigue. As our body realizes we’re tired and wants to stop exercising, it sends signals to the brain to stop for a break” (Cooper).

Listening to music competes for our brain’s attention, and can help us to override those signals of fatigue. Music is a motivator, not only can we push through the pain but work out longer. When working out we tend to play upbeat, fast paced, heavy temp music to get our heart beating. Certain types of music have a higher bpm (beats per minute) than others. For example, disco only has 120bpm meanwhile Dubstep a form of electronic dance music infused with base drops and screeches has 150bpm. Our bodies benefit by the type of music we listen to when we work out because it gets our blood pumping and our hearts beating faster, which keeps our body in shape. In conclusion, music has impacted many lives. It has influenced cultures, generations, movements, and our anatomy. Music is essential to our biology because it releases hormones that make us feel good, and emotions that are viable to our existence. It’s an interesting concept though that a bunch of sounds, rhythms, and beats can be pieced together to create a beautiful piece of musical art to be heard and enjoyed by billions.

For me as a DJ music really stimulates my brain. Whenever I’m listening to Dubstep which is at 150 bmp, it gets me pumped up and ready to go! If it was not for music then we would not have a sense of identity, or belonging. Music is a channeling force, it is available to everyone and you can get lost in it and forget your problems. Also when we are working out music is keeping us motivated to push through our weakness and is our aid in getting into shape. Without the piecing together of bass drops, sirens, scratches, or any other effects on music our mind would be a silent place.

How Music Affects the Brain. (2016, Mar 25). Retrieved from http://studymoose.com/how-music-affects-the-brain-essay 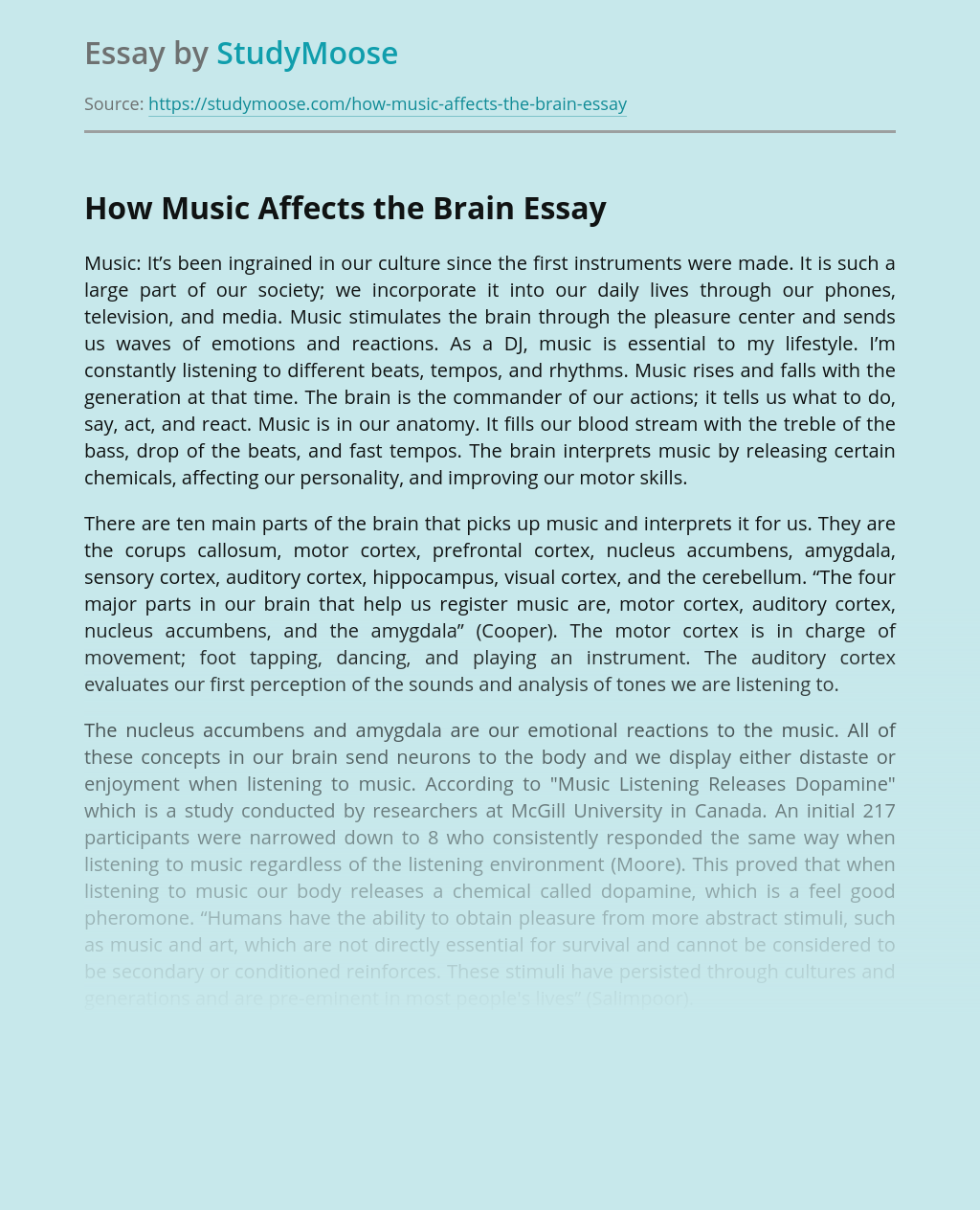 Don’t waste time
Get a verified expert to help you with How Music Affects the Brain
Hire verified expert
$35.80 for a 2-page paper
Stay Safe, Stay Original